The Greek Debt Crisis Has Everything To Do With Cleveland Sports

The New York Times recently published a column by Michael Powell titled “Sports Owners Dip Into the Public’s Purse, Despite Their Billions in the Bank.” The piece focused on Cleveland and last year’s county-wide ballot issue on the “sin tax,” in which the local pro sports owners, with the help of their corporate sponsors, spent $3 million on campaign advertising to secure some $300 million in tax dollars to fund their privately owned franchises. The owners’ campaign slogan was “Keep Cleveland Strong,” a not-so-subtle and not-at-all-credible threat that one or more of the Browns, Cavaliers, or Indians would leave Cleveland if they didn’t receive the subsidy.

Powell’s column (disclosure: which also features several quotes from me) freshly raises familiar questions about why a struggling county would spend so much public money to subsidize hugely profitable businesses owned by billionaires. It also raises questions about why the Times would care to focus on the Cleveland sin tax fight so long after the fact, with the subsidy now stuck on Cuyahoga County taxpayer’s bill until 2035. But it’s an issue that keeps coming up across the US, most recently in Milwaukee with the NBA’s Bucks, and with St. Louis, Oakland, and San Diego’s respective NFL teams threatening to move to LA. And more generally speaking, billionaires sticking it to civilians with unsustainable debt loads is a hot topic worldwide.

Powell gets to the heart of the matter in pointing out that:

“In editorializing for the sin tax, The Cleveland Plain Dealer argued that the city had a landlord’s responsibility to pay for upkeep. Left unexplained was why the landlord had never tried to renegotiate terms with ever more wealthy teams.”

Of course, it should have been so simple. All Cleveland’s leaders had to do was point to a bleeding economy, deplorable poverty and inequality, third-world infant mortality rates, and crumbling infrastructure, including massive budget cuts to a school system that was already the nation’s second-worst. It should have been the easiest thing in the world to say to the owners: We’ve already given you $1 billion or so for these sports facilities on agreements that were written more than two decades ago under dramatically different economic circumstances. With things as they are now, we can’t afford to give you any more money, and you couldn’t possibly really need it anyway.

At that point it would have been on the billionaires to make a real case for the sin tax. At the very least this would have required them to reveal how much profit they make from the sports franchises, to explain why they couldn’t afford to pay their own business expenses, and why they couldn’t have written off the public’s obligation in light of the changed economic conditions. They might also have addressed the near-unanimous opinion of economists that sports stadiums don’t generate enough economic activity to justify public subsidies.

But no one ever made the owners do that. Instead, the county’s leaders forced on taxpayers the presumption that the old deals, written in the wake of Art Modell’s theft of the original Browns from Cleveland, were sacrosanct, and that the owners would have to get every penny from the public, even if it meant more cuts to key services. It was the perfect time for a conversation about priorities, and hundreds of millions of dollars that could have been spent on any of a number of more pressing problems. But the county’s leaders only wanted to talk about “a penny for a glass of wine, a penny and half for a bottle of beer, and less than a nickel for a pack of cigarettes,” a line perfectly tuned to wealthy and increasingly segregated suburbanites.

As tempting as it might be to shrug and say, “Only in Cleveland,” we’re actually talking about another typical (if especially glaring) product of the same creditors-over-people politics that’s been eating away at the whole developed world for the last 40 years. From New York in the 1970s to Detroit and Cleveland today, when economic earthquakes hit, it’s pensioners and taxpayers who are made to suffer while the rights of banks and billionaires are preserved at whatever cost. This, again, is a policy choice. And it should be no surprise that policy choices like this have been taken further out of pensioners’ and taxpayers’ hands as limits on political campaign spending have disappeared. 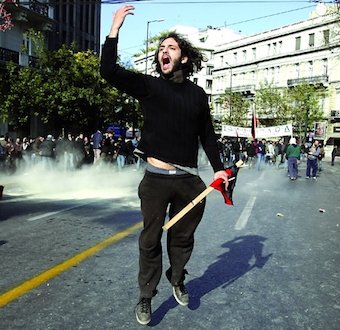 One might hope that this strategy of pretending that debt can’t be rewritten can only be taken so far, but developing events continue to put such hope to the test. Case in point: Europe, where Greece’s economy is up in flames, and creditors – led mostly by Germany, banks, and German banks – are angling to collect every penny on impossible loans made ostensibly to “bail-out” the Greeks, but that really just bailed out their creditors, who, in a sane system, would have been required to bear the consequences of their own irresponsible lending. Meanwhile, just to earn the privilege to repay these creditors, the Greek people have been forced to suffer austerity measures that include the slashing of wages (including the minimum wage by 22%) and more than 150,000 public sector jobs, as well as hundreds of millions in pension benefits, and untold government spending on health care and other services, while taxes on working people have been raised, taxes on corporations and the wealthy have been cut, and laws have been enacted to make it easier for businesses to mistreat workers.

As austerity has predictably failed to revive Greece’s economy, and instead sent it further into a tailspin, the nation’s creditors have only become more insistent on repayment. This, ostensibly in the name of “preserving the European Union,” but really just to preserve “a structure that makes it possible to unload the losses of the big countries’ failing financial systems onto the shoulders of the smaller.” A ballot initiative put forth by Greece’s newly elected radical-left government, by which the Greek people risked expulsion from EU by rejecting additional punitive bailout terms, has apparently only strengthened the creditors’ resolve.

Nevermind that it was hardly 50 years ago that Germany elected Hitler and bombed out an entire continent before losing World War 2 and having its debt written off in massive amounts by the nations it sought to destroy. And nevermind that global financial markets are hardly 100 years old, and have so far accomplished nothing as significant as polluting the planet so as to threaten humanity’s survival. Business is booming at Goldman Sachs in both the Greek public debt and U.S. stadium financing departments. A deal is a deal is a deal.

In Cleveland’s defense, if public-subsidies-for-pro-sports-stadiums is backwards, it’s certainly no more so than pretty much everything else.

At least there’ve been some interesting issues popping up on ballots lately.

___
Peter Pattakos is a Cleveland attorney and the publisher of Cleveland Frowns.

Belt is reader supported; become a member to keep us that way (plus great cool gifts).