The Nature of Chicago Music

Music and nature are two core places where people report to experiencing and channeling the divine.

Working with musicians was a pleasant surprise – there was beauty in the process, through being fluid with timelines, themes, and formats of creating these photoshoots from the musicians’ words. I interviewed ten artists who are currently creating in Chicago or began their journey in the Chicago music scene about their relationship to music and nature.

Music and nature are two core places where people report to experiencing and channeling the divine. The prompt I gave to each musician before our conversation and photo shoot was what comes to mind when I say ‘nature’? I encouraged them to think outside of nature: nature can be a plant on your stoop, a tree on your block, or a succulent in the studio. Each musician chose their location based on a nature space that felt close to them and their experiences creating music. I am so grateful to everyone here for letting me step into their green worlds, from historic Chicago parks to spaces on the forefront of important environmental and agricultural justice and access. 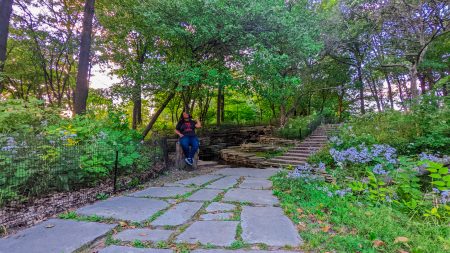 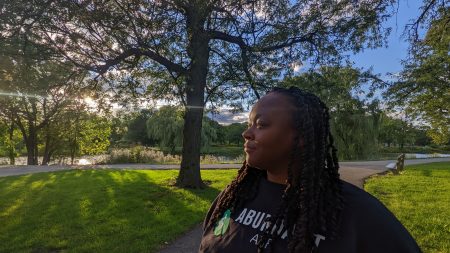 FURY is a rapper and musician who submitted and won a grant of $1.5 million dollars from the city to enrich a park and community. She walked me through Columbus Park and explained the plans she has for this park and to nurture the artistic community in Austin. She told me that for her nature is connected to meditation and being in a meditative space, so learning how to be present contributed to her growth as an artist and how she speaks to herself and being present, “listening to my breath, listening to my heartbeat. Even if it’s for fifteen minutes or two minutes, it’s about being present and grateful.” She explained how she’s learned so much about nature and about using her funds for the park in a way not to be invasive to the ponds, willow trees, wildflowers and birds in the community. She said, “I learned this by talking to community members to learn how to be mindful so we don’t scare our bird friends away.”

You can find links to her music and shows here. 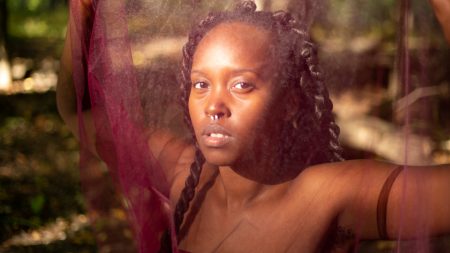 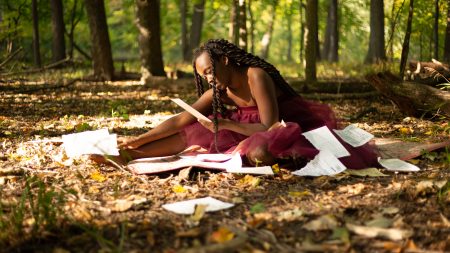 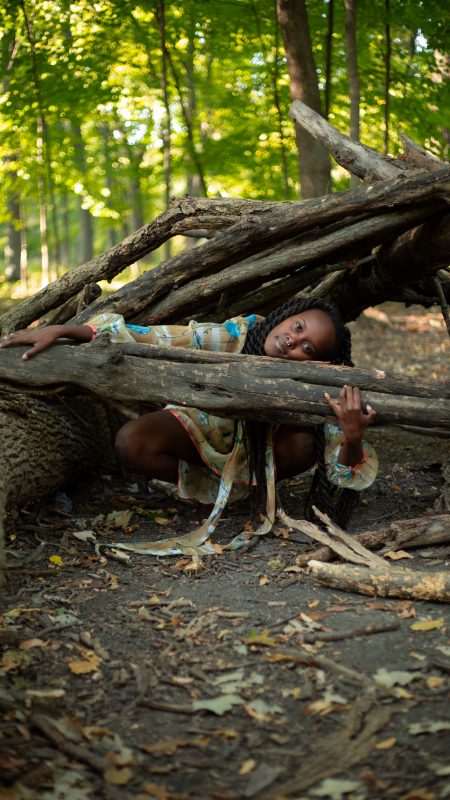 When presented the prompt, musician Evéa responded, “There’s so many things I think of when it comes to nature. Today I thought of seeds and spores that had a desire and the collective conscience spilling the tea to the bee’s, wind, rain and more so that they can giggle their way into tree’s, flowers, mushrooms, and homes for insects. Nature is alive, making wishes on shooting stars, and receives just by being”

You can find her music on Spotify and her Instagram. 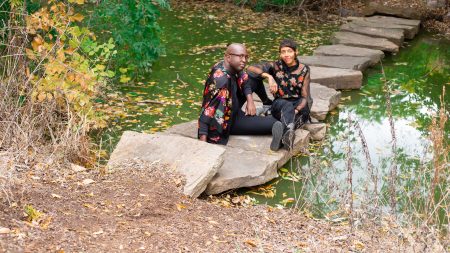 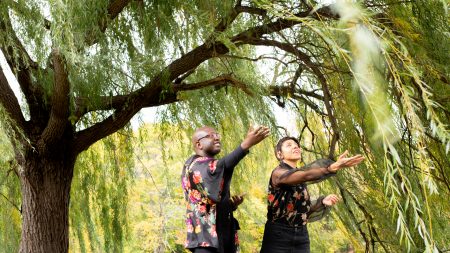 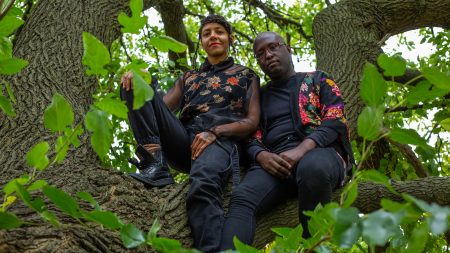 When I walked with Gilt Drip’s members, Sarai and Khalyle, through Washington park (they came to the photo shoot from band rehearsal) we talked through what their process was as musicians connected to nature. They both shared that nature is a foundational part of their mental health and getting grounded as people that helps them show up for the music.

To the prompt, Sarai responded. “Nature is reciprocity. It makes me think of grandma’s house. Of fire ants eating my childhood knees as I discover that I am part of the food chain; that I can be prey. The cyclical experience of healing, of continuous change”

You can find Gilt Drip at Spotify, Bandcamp, and Instagram 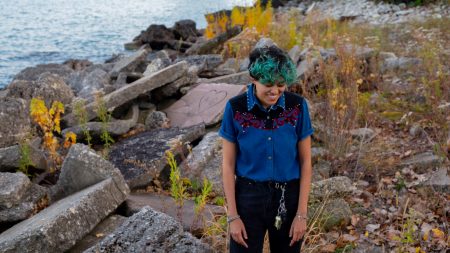 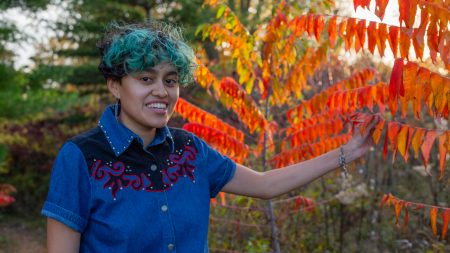 Citlally, drummer and booker of punk shows around Chicago, instantly took to the trees and shrubs around us, explaining what kind of plant they were and explained how they give nature walks frequently. They told me they are inspired by DJing and want to record and sample sounds from the woods, the lake, and birds. When it came to their connection to music, Citllally explained, “As a punk, anger is always inspiring. And the climate and how it’s changed is one thing to be angry about.” They explained they chose this park because it was prominent in Environmental Justice conversations to protect the space from developers whose plans would threaten the plants and animals that call the historic park home.

You can find information on their music and shows on Instagram. 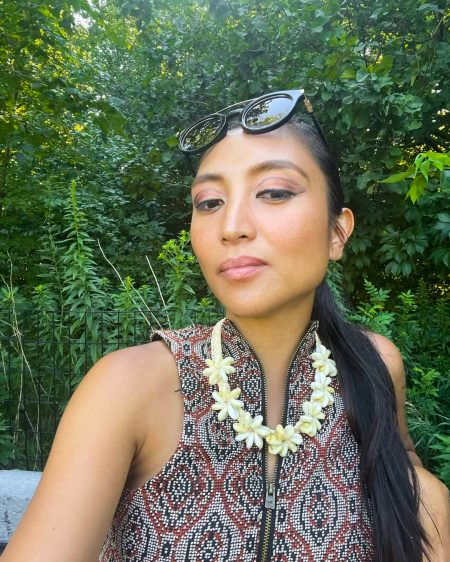 Soultree, Remote (based in LA)

Musician Soultree is so rooted in nature in their practice as an artist and as a healer. I have received beautiful tarot and reiki readings from them while they were sitting in a garden and advising me what herbs to build relationships with. I learn so much of their approach to creating music and building community. We share a very specific bond community that was rooted in Chicago, since both of us are from migrant backgrounds, in the AAPI community, and as artists who feel the divine in our calling. You can hear how they weave their passion for healing, for liberation, for the people in their amazing words and music, including in their brand new album, GEM.

You can find their work and music on Instagram and here. 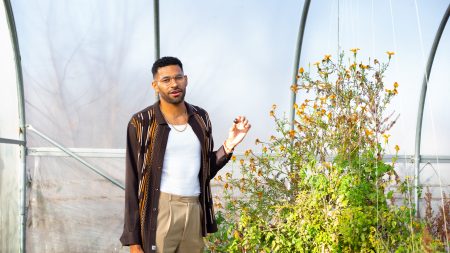 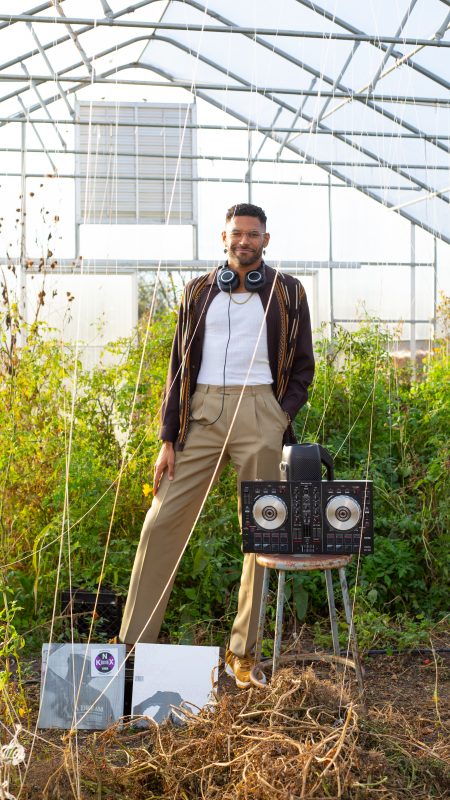 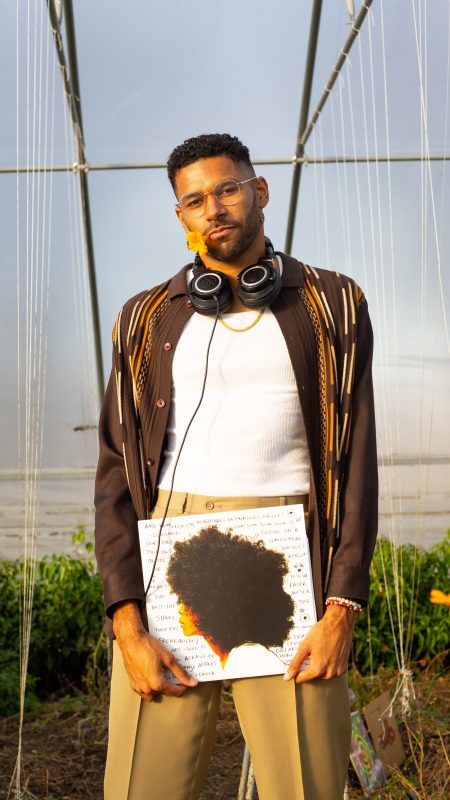 DJ Nick2bomb puts together music, earth, and Black liberatory practice. He made a special mix just for this feature. He said, “I was thinking about a lot of what I do is the intersection of music, Black Liberation, the land, stewardship, and land justice work and they’re all deeply interconnected, especially in a culture where dance is a liberatory practice, as a spiritual practice, that’s like performed on the earth and is about people’s feet being grounded on the earth.” In the context of dance parties he said, “we have like a DJ who’s sending people into ecstasy. The beats suddenly taking over your heart and you feel in relation to everyone around you a lot more. Cultures throughout history have done this in a multitude of ways.” He said he puts his music together inspired by a continuation of those practices of using music to bring closer to the earth. You can find his tracks on Soundcloud. 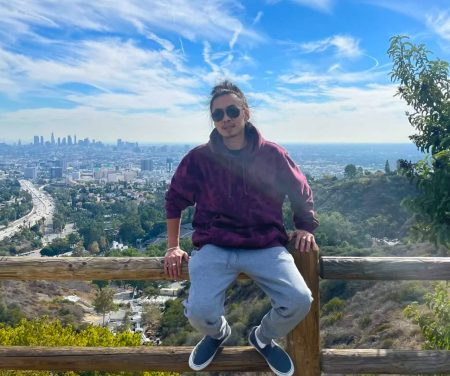 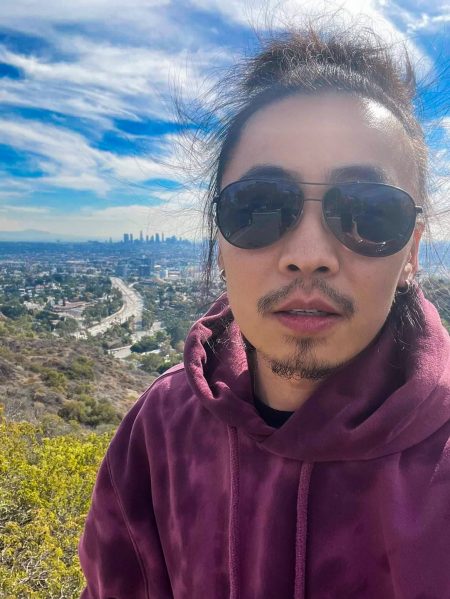 Monotone, Remote (based in LA)

When I asked Monotone about his relationship to nature, he said, “I’m personally very far away from nature in a sense, so this will be interesting for me too!” We talked about exploring the relationship to nature based on disconnection, as the climate crisis is becoming increasingly apparent. He emphasized how living so disconnected from nature in a city makes him think about what we need to do to change this situation. This call for change can be found in Monotone’s playful and powerful words and music, which you can check out here. 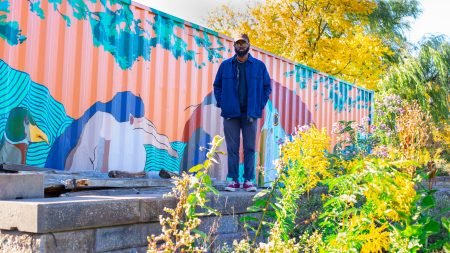 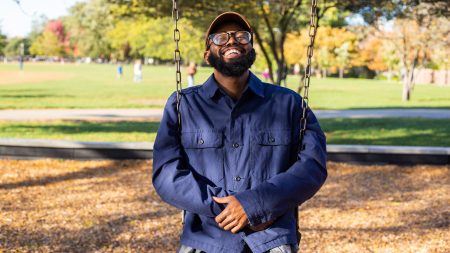 Jae is an audio engineer and DJ. He walked me through the trailways and paths by the river. “We definitely grew a bond over the last year or so,” he said of him and the park and since it was right in between where he worked and where he lived, he walked through it and found inspiration in the calmness spending time on the trails by the trees and flowers of the park. He said, to him, Nature is “mindlessness, staying grounded, connecting with something more beyond myself, experiencing life in a different way, clarity, and cool spaces.” 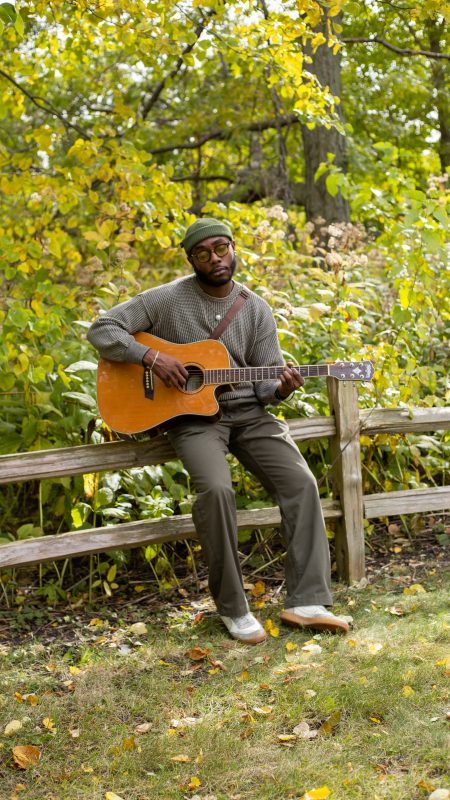 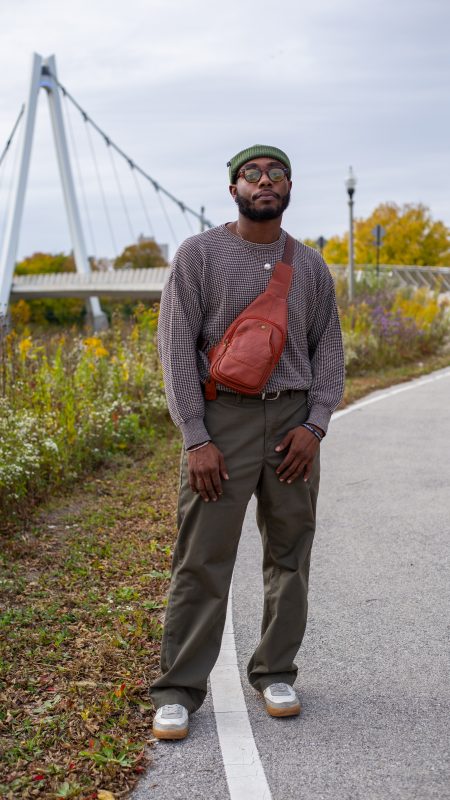 Musician David Blair II has always brought up conversations with and around nature whenever we have discussions about creating art. In response to the prompt, he said, “I want to paint the picture of nature being home, center, solace. Also nature being where things can grow, so like nature could be a fruitful place in your mind that allows things to grow and flourish. But using real trees and nature shots as the metaphor.”

You can find his music and info about his shows on Instagram.

Stuti Sharma (she/they) is a poet, comedian, photographer, educator, and filmmaker who is of Indian heritage, born in Nairobi, and raised in Chicago. She has work in Autostraddle, Belt Publishing, Mason Jar Press, 68to05.com, and she was a member of the Tin House 2020 Summer Workshop. You can contact and find more information on her shows and writing here.