The Relics of Morton Grove, Illinois

All Saints Parish has a special status within the Catholic church because of the massive collection of relics that adorn its walls, vestibules, and nooks.

All Saints Parish (formerly St. Martha Church) in Morton Grove, Illinois sits on a quiet tree-lined suburban street on the outskirts of Chicago. The late mid-century brick building looks more like a community center than a church, which is fitting since it was built and designed in 1960 to function as both. On the inside, a large crucifix and an altar are situated to one side, facing chairs that can be moved out of the way to accommodate a basketball game or other community event. Despite its humble origins, All Saints Parish has a special status within the Catholic church because of the massive collection of relics that adorn its walls, vestibules, and nooks. Known as The Shrine of All Saints, it’s home to over 3,000 relics and is the second largest Catholic relic collection in the United States behind only Pittsburgh’s St. Anthony’s Chapel.

The relics have been collected over many years by the pastor Father Dennis O’Neill who feels a personal and spiritual connection with the relics.

“I’ve been collecting relics since I was a teenager,” said Father Dennis. “It gave me a sense of tangible connection with the saints that I hadn’t experienced before.”

The collection contains remnants of many of Christianity’s most holy and revered figures such as The Virgin Mary, St. Peter, St. Thomas, John the Baptist, Thomas Aquinas, and many others. The pelvis bone of St. Nicholas, the 4th-century bishop who was the inspiration for Santa Claus, resides here as do fragments of The True Cross.  Father O’Neill has acquired relics that interest him from fellow relic enthusiasts and through online purchases on eBay. Although human remains can’t be sold on eBay, an exception is made for religious relics; a recent eBay search revealed over 900 items classified as Catholic relics.

Relics are classified as first or second class; first class relics are actual remnants of a saint or an item that came in direct contact with them. The most prized and valuable relics are those that have a wax seal on them; these have been authenticated by officials of the Catholic Church at some point in the past. With Catholicism in decline in Europe, many churches and monasteries have closed, and the inevitable relics they contain have been released onto the open market. These relics make their way both into private hands as well as into public collections like The Shrine of All Saints. 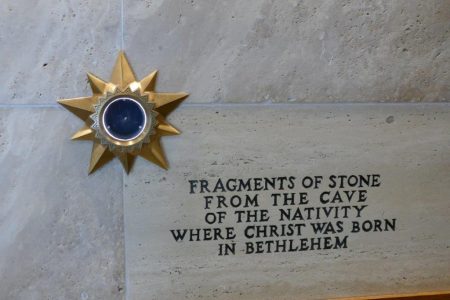 Before one enters the nave or main room of the church and the bulk of the relic collection, there’s an entranceway that displays framed fragments of the cave in which many believe Jesus was born. It’s widely held that the manger Jesus was born was located inside a cave in Bethlehem since barns simply didn’t exist at that time and it was common practice to lodge flocks in caves. 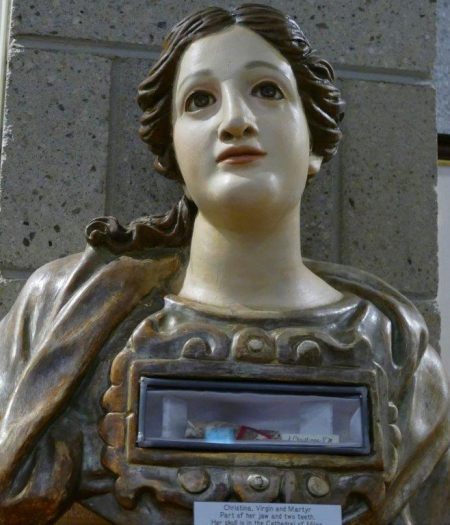 This 18th-century carved Viennese bust of St. Christina of Bolsena, a 3rd-century Christian Martyr, contains her jaw and two teeth, and is an excellent example of how ancient relics are often contained in relatively newer and often baroque reliquaries. 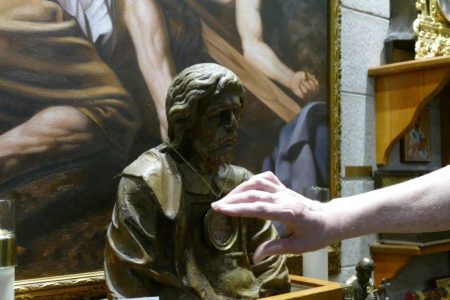 This bust of St. Peter, one of the 12 Apostles and an early leader of the Christian church, was hand-carved in Italy around 1540 for an English church. 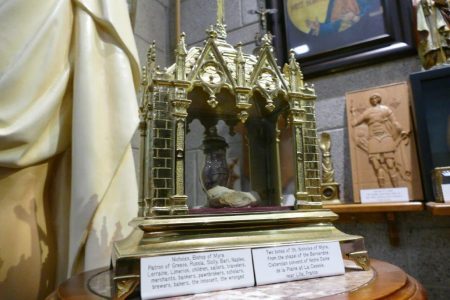 Two of St. Nicholas of Myra’s bones are pictured in their reliquary. St. Nicholas, a 4th-century bishop from modern-day Turkey, is the inspiration behind the legend of Santa Claus. St. Nicholas was celebrated for acts of generosity such as dropping gold coins down the chimneys of the poor as well as for performing miracles like resurrecting the slain and dismembered bodies of three murdered boys. 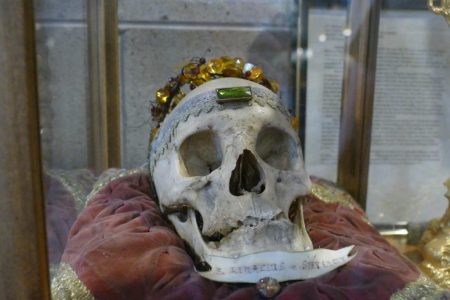 One of the more striking and grim relics in the collection, the skull of St. Remaclus dates to AD 670. Remaclus was a 7th-century French Benedictine bishop renowned for his devout commitment to Christ. 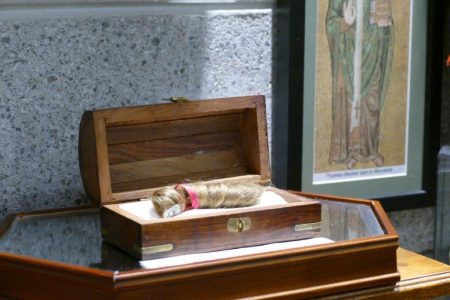 This bundle of hair came from St. Therese of Lisieux; one of many more modern saints in the collection. St. Therese (January 2, 1873 –September 30, 1897) was a French Catholic Carmelite nun. Although she died at the age of 24 from tuberculosis, St. Therese went on to gain great fame and appreciation within the church for her sanctity and devotion. Mysteriously, the hair still smells of roses. 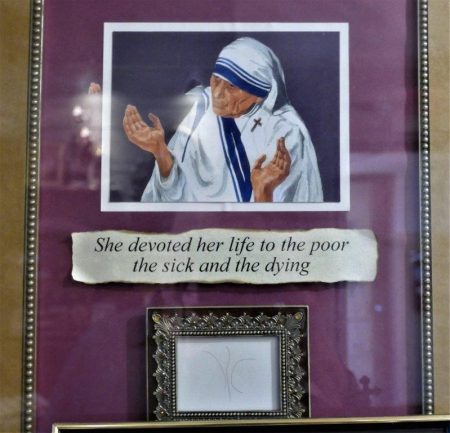 Mary Teresa Bojaxhiu (August 26, 1910 – September 5, 1997), better known as Mother Theresa, was an Indian-Albanian nun who received the Nobel Peace prize in 1979 for her work with the poor in India. Pictured are three hairs saved from a haircut Mother Theresa gave herself in New York in 1975. Although she was canonized in 2016, Mother Theresa remains a controversial figure in some circles because of her alleged practice of secretly baptizing the dying regardless of religion and charges of poor medical care in the facilities she supervised. 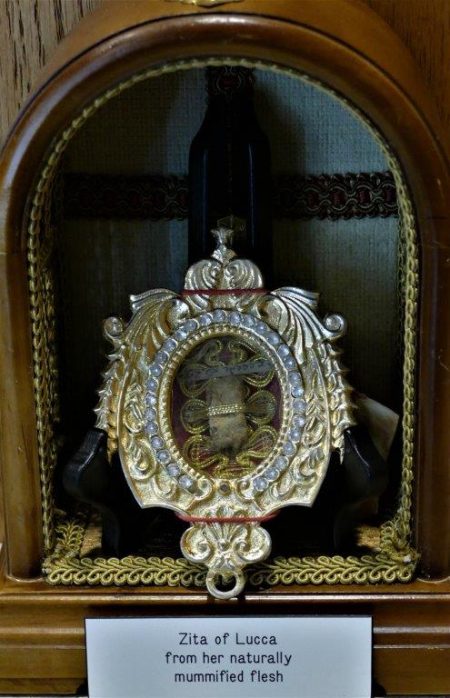 St. Zita of Lucca was an Italian peasant who worked as a servant and who died in 1272. St. Zita is the patron saint of servants and lost keys and is one of the “incorruptible” saints or a saint whose body has been mysteriously or miraculously preserved. Pictured is a relic that contains a fragment of flesh from St. Zita. 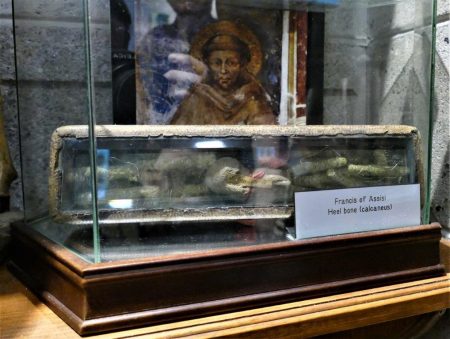 Pictured is the heelbone of Saint Francis of Assisi. Saint Francis of Assisi (1181 – 1226), was an Italian Catholic friar who founded the Franciscans, a monastic order that dedicated themselves to lives of poverty in which they helped the poor. St. Francis is one of the most famous and beloved figures in Christianity. 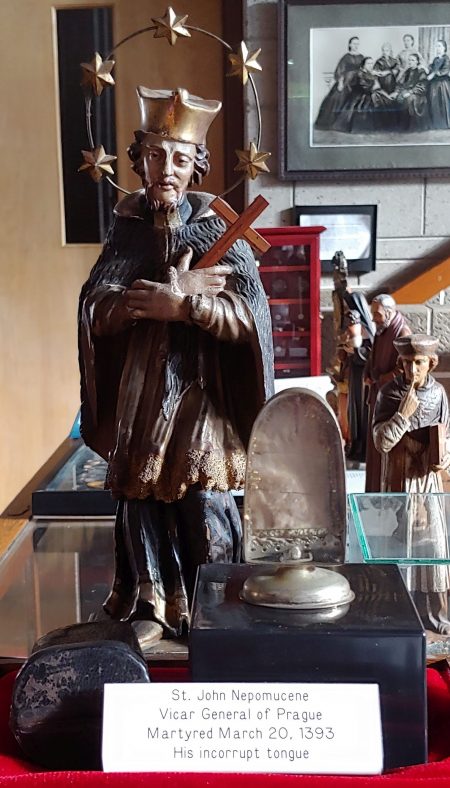 According to Father Dennis, the incorruptible tongue of the St. John Nepomucene is one of the most unique relics in the collection. St. John Nepomucene was a 14th-century martyred Vicar from Prague who was the confessor to King Wenceslaus IV’s wife, the queen. King Wenceslaus tortured St. John to learn what the queen had said during her confession. However, St. John refused to violate the secrecy of the confessional and was subsequently drowned in the river at the king’s command.

Chris Iovenko is a Los Angeles writer and photographer who has published in such places as The Atlantic, HuffPost, The New Republic, National Geographic, Vice, Slate, The Washington Post, The Los Angeles Times, The New York Times, and elsewhere.