The results of a “play census” of Cleveland children taken on June 23, 1913, disturbed Harvard education professor George E. Johnson. “Of the 7358 children reported to have been playing,” Johnson wrote in a 1915 report on the state of children’s play in the city:

We now fret over children’s overscheduled, oversupervised lives, but Johnson was convinced that what the children of Cleveland needed was more adult influence, not less. His fascinating report paints what he meant to be a dark picture of a city full of kids running wild: playing in the street, going to the movies when they pleased, and putting together loose groups for games of “scrub baseball.” 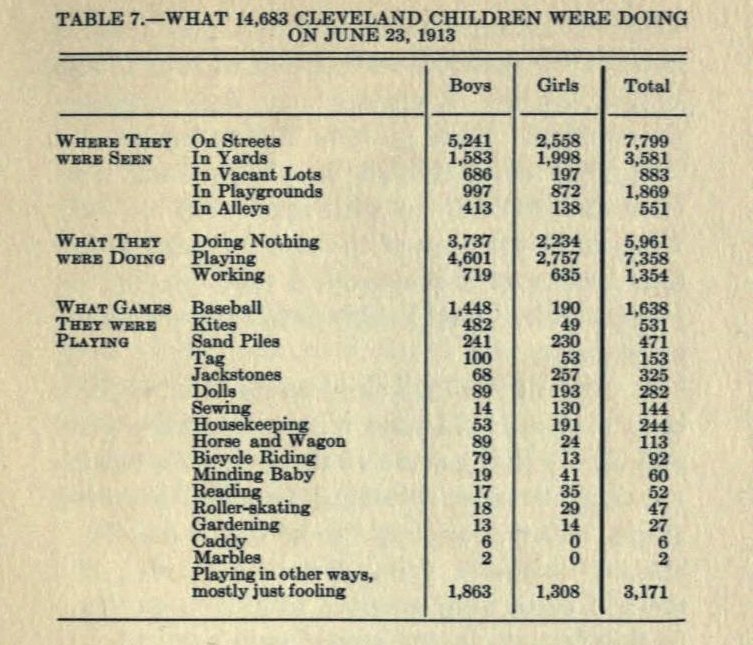 In the late nineteenth century, children’s play — not previously considered an important topic of academic study — began to take on almost mystical significance among the psychologists and educators who were committed to bringing science to bear on the question of childhood development. After theorists of childhood and education like G. Stanley Hall, John Dewey, Maria Montessori, and Friedrich Froebel drew new attention to patterns of children’s psychology and development, historian Bernard Mergen writes, the vogue for studying play became suddenly all-consuming: “Like prospectors struck by gold-fever, teachers, ministers, and administrators began to mine the rich fields of play.”

Arguments for what advocates would call “guided, rational recreation” — play undertaken under the supervision of adult specialists, or at least within the parameters that adults had studied and determined acceptable — went hand-in-hand with many other Progressive Era causes. Play was invoked in arguments against child labor (work robbed children of developmentally necessary time for healthy fun); for temperance (if children would play well when they were younger, they would know how to recreate without alcohol when they were older); and for democratic inclusiveness (kids who played well on teams would be good citizens when they grew up). Lack of good play, on the other hand, would result in a glut of “undeveloped” Americans. As Johnson wrote, “The boy without play is father to the man without a job.”

By 1916, when the two-year-old Cleveland Foundation produced Johnson’s survey of the play activities of Cleveland children, the child study and child advocacy movements had been in full swing for a few decades Education Through Recreation (which can be read in full on the Internet Archive) was printed by the Foundation’s Survey Committee. Recreation was one of a group of child-centered reports the Foundation published at the same time: “School Buildings and Equipment,” “Health Work in the Public Schools,” “Boys and Girls in Commercial Work,” “The School and the Immigrant.” The Foundation was interested in seeing how Cleveland children — in all their ethnic and class diversity — were faring, and in making recommendations for the improvement of their lot.

Johnson pointed out that Cleveland had already taken steps to promote physical training: the creation of a city-wide department; the hiring of school administrators who would direct schoolroom and indoor recreation; and the inclusion of recreation equipment in school budgets. Yet, he wrote, the deployment of these resources was still imperfect. Recesses were insufficiently supervised, and “children do nevertheless play games, but there is a vast deal of informal, sometimes anti-social, and relatively valueless romping and scuffling, and the recess becomes a period not of genuine social increase, but rather of social leakage.” Johnson wanted the Board of Education to change its rules so that children would be allowed to come onto the school playgrounds after dismissal and during summers. Under the current policy, he wrote, children substituted “the street, the vacant lot, the back yard, and the moving-picture show” for play on the school’s scientifically designed playground equipment.

Schools should build pools and allow children in them, since, as Johnson wrote, “Cleveland has wonderful natural facilities for swimming. But natural facilities alone are not sufficient for the universal acquirement of swimming.” The proof was in the 1915 numbers of boys and girls who couldn’t swim — percentages illustrated in the report using charmingly crude infographics. 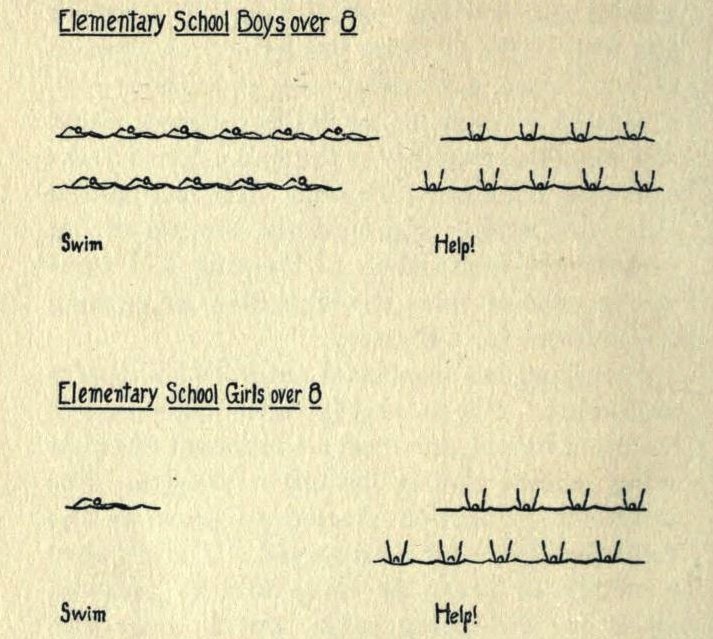 Johnson was also unhappy about the number of boys who played baseball — which he saw as an unmitigated good influence — only in what he called “scrub teams,” or casual, loose arrangements of pickup games. “Boys should not only play baseball, but they should play on well-organized teams,” he wrote. “Scrub baseball is not the real thing. A scrub team has scarcely half the social value of a regular team.” Interestingly, Cleveland’s girls played baseball in parks, streets, and vacant lots more often than Johnson had expected — probably, he thought, because they played indoor baseball in school. 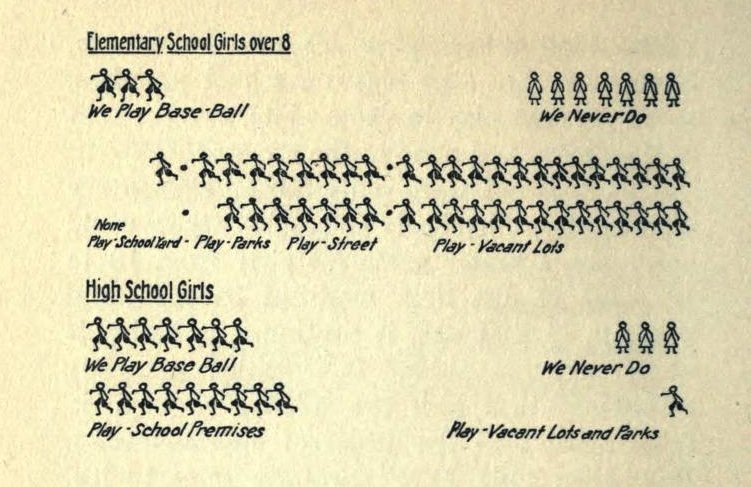 Like many reformers assessing the state of childhood in cities around the turn of the twentieth century, Johnson worried that Cleveland’s children didn’t have enough contact with the outdoors, without many chances to hike, camp, and hunt. He wanted schools and organizations to find out ways to bring children out into the woods. Hunting, he argued, using language common in the time of recapitulation theory, was fundamental to human nature, part of our evolutionary background, and a necessary activity for growing children. On the other hand, many schools in the early twentieth century had school garden programs, and many families grew vegetables in their backyards, so the Cleveland children who responded to Johnson’s survey quite commonly said that they had gardens: 72% of boys over 8, and 83% of girls. 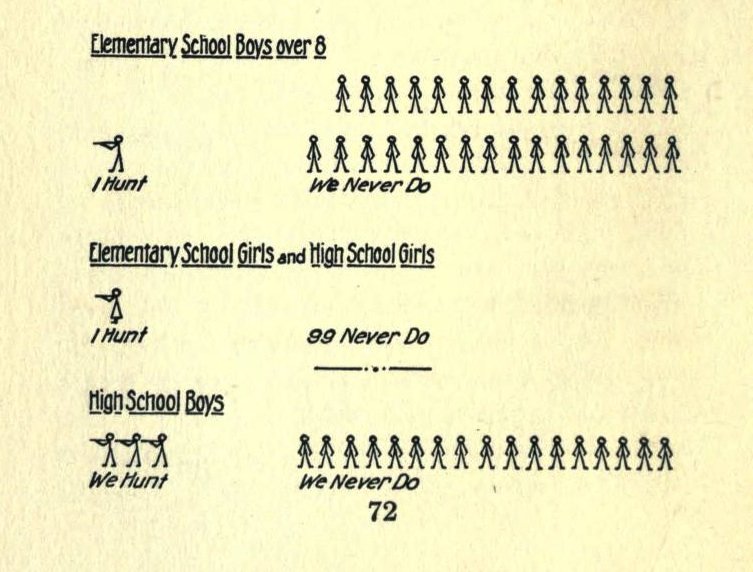 Finally, Johnson worried that Cleveland kids were far too besotted by the movies. Schools needed to create competitive games based in dramatic play, because movies had dominion over what Johnson called “the emotional life of children.” “Promiscuous and excessive attendance at the movies and the vaudeville without educational guidance,” he wrote, “is a grave menace to the normal, healthy emotional life of young people.” (A few decades later, the large-scale Payne Fund Studies, conducted by sociologists, would assess the impact of movies on children, expressing some of the same concerns about the ways that movies changed young viewers’ attitudes.) 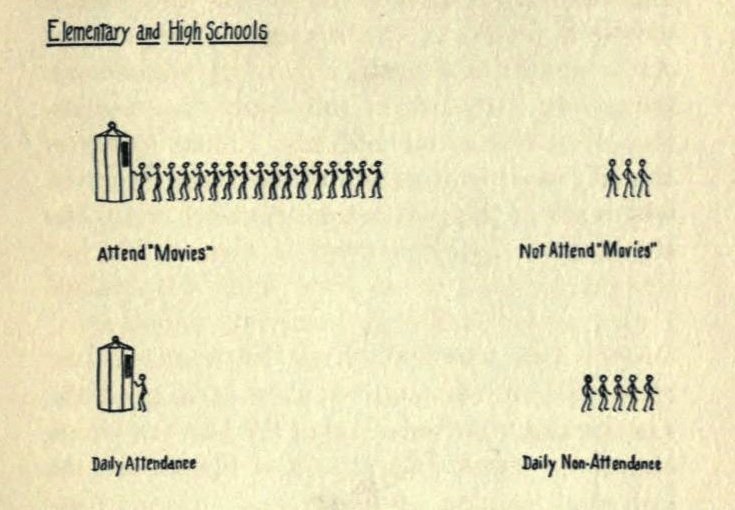 How much of this historical detail can we take at face value? Bernard Mergen points out the difficulties a historian might have in trying to determine what children were actually playing in the past, based on what they told researchers. (It is entirely possible that some of the kids who told Johnson’s investigators that they were “doing nothing” actually had a game in progress, but just didn’t feel like telling a strange adult about it.) Given this issue, Mergen thought, it’s interesting to study “not what children actually did, but what adult studies of children’s play thought they were doing.”

The questions Johnson asked, and the answers he got, painted a picture of Cleveland children cobbling together ideas about what was fun from many sources: the athletic games they participated in while they were at school; popular culture; folklore; their parents; their peers. Johnson saw this as a problem to be solved. We, on the other hand, romanticize a misty “way back when” of children’s history, full of spontaneous, undirected, screentime-free play. This treasured image of playtimes past misses many moments of danger, violence, and disadvantage.

A look back at a report like Johnson’s makes it clear that our worries about play have a history. Johnson and other reformers who worried about early 20th-century recreation now seem quaintly authoritarian. How will our own play polemics pass the test of time?

Rebecca Onion lives in Athens, Ohio. She is Slate’s history writer, and runs the site’s documents blog, The Vault.