A Tourist’s Guide to the Cleveland You Can’t See 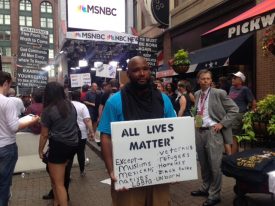 Meeting up with a couple non-media, non-RNC-affiliated locals for a pre-dinner drink, I asked for their first impressions on the circus. As a steady parade of politically costumed outsiders streamed through the barricaded street, my companion responded, “It’s like a shitty Bourbon Street.” And she’s so right: the barricades and motorcades are cheap substitutes for Mardi Gras’ parade routes and floats, while the political posturing of everyone who’s come to town feels like a buttoning-up of everything New Orleans so necessarily lets ride. 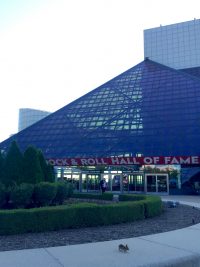 After zipping through enough road barriers to that my Uber driver – a local bartender on his side hustle – chuckled and said, “I’m just going to keep driving until they won’t let me anymore,” plus a full bag check and magnetic body wanding by the police, I walked up to the Rock Hall’s doors and tugged on three separate entrances before anyone bothered to come out and inform me that the museum of “Music that Changed the World” had been closed to the public “for hours.”

I took photos of these cute little punks squatting on I.M Pei’s lawn as souvenirs and called it good.

When I was first planning to come to Cleveland for the RNC, I thought maybe, just maybe, I’d finagle a special trip out of NASA to peek into a genuine rocket science lab, cryogenics research station, and a hypersonic testing facility. But when far-left media began running reports back in June that national law enforcement would be using NASA Glenn as a staging site, I decided not to mess with it. A few wrong turns while returning my rental car got me closer than I meant to be, passing a bunch of white SUVs and two trios of vans – either all bright red or a drab grey – parked in an American Legion lot down the road. 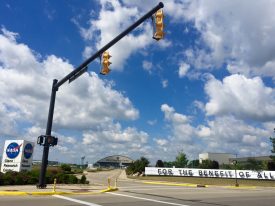 Usually I’m very Team-NASA but the giant sign reading FOR THE BETTERMENT OF ALL felt more ominous than inspiring.

Rather than struggle my way into a preoccupied NASA, I found a relic of space to go visit. Tucked on the edge of East Cleveland is the husk of the Warner and Swasey Observatory. Ruined and (partially) boarded up today, the observatory operated for more than 60 years thanks to Cleveland’s relatively light pollution-free skyline. Gifted to the Case School of Applied Science in 1919, the site remained a local repository of astronomical knowledge until it was shuttered for good in 1982.

Today, the Warner and Swasey Observatory is decorated with graffiti, stickers, and detritus. A peek through any of the non-boarded-up windows shows spray-painted messages across the interior: “will you go to prom with me andy?”; “some days I miss being an addict my life had purpose” ;or a painting of a gun with “TAMIR” written on it. 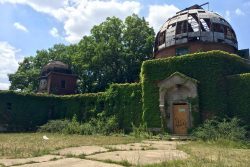 An inscription on the Observatory reads, “Dedicated to the memory of Worcester Reed Warner, by his wife and daughter, for the extension of knowledge and service of those who, as did he, gain delight and inspiration from the unfolding mysteries of the skies” [1940].

Maybe one day we’ll get back to a place where we can look up again, instead of fixating exclusively only on each other.

Surrounded by titans of yore, I’ve come to Cleveland Heights’ Lakeview Cemetery to pay homage to a Republican who served as President for just 200 days before his assassination at the hands of a railway worker by the name of Guiteau. Known for its mixed gothic and classic architectural styles, the James A. Garfield Memorial is easy to find. The three-tiered tribute has intricate tile mosaics, a giant statue of the politician himself, and a subterranean display of the former President’s casket, as well as that of his wife and two urns of their children. 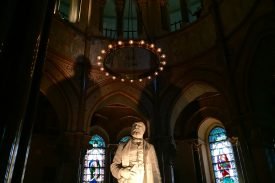 Far from the RNC’s living, breathing heart, it’s here that after four days of wandering the depths of the city, that I hear a measured and thoughtful discussion among strangers on how Trump rose to power took place. A first-time delegate named Brian Dooley from Nashua, New Hampshire was joined by Ken, a political and history buff from New Jersey, both in town for the convention.

Everyone took turns politely exchanging their opinions and concerns about the party. Dooley, who’d been a Mitt man in ‘12 before supporting Christie, and then “Jeb or Kasich” this cycle, met Trump twice in the primary and was put off by his arrogance. Ken has voted on both sides of the party lines, and “drags his wife” along the primary trail to shake hands will all the contenders, Democrat and Republican alike. Both men 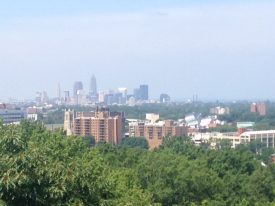 agreed that aside from the GOP, the country as a whole is in an interesting position, having united “whether it’s Bernie or Trump” under an antiestablishment sentiment.

Nearly 180 feet up on the memorial’s observation deck with the city shimmering in the distance and alarmingly wobbly stone pavers beneath our feet, real-talking politics with strangers, felt like the most proper goodbye to Cleveland’s skyline anyone could ask for.