Wandering Terroir: For Beloved Restaurants, Mobility May be the Key to Modern Survival

Across Michigan, restaurants with storied histories and cherished addresses are relocating from urban centers to suburban strip malls with remarkable success, providing a regional twist on a national debate about the value of restaurant preservation

Along the East Coast, where institutions are old and commercial space is finite, the debate has raged for some time. In New York City, intense real estate pressures have forced restaurants as diverse as Café Edison, Union Square Café, wd-50 and Greenwich Village’s legendary Gray’s Papaya out of business, prompting New Yorkers from Mario Batali to Mayor Bill de Blasio to lament a system that may protect buildings, but not the distinctive culture they nourish.

But what’s almost never mentioned on the East Coast is the option of moving the afflicted restaurant out of harm’s way. It’s taken as a given that the terroir of a restaurant is so profound that its physical re-creation elsewhere is out of the question. And to be sure, the suburban solution (the “nuclear option” for New Yorkers) has far less value in some east coast cities where fewer people own cars. Yet two beloved restaurants in Ann Arbor, Mich. have demonstrated that the prospects for restaurant preservation — and relocation — in the auto-centric Midwest are considerably rosier.

When Wilhelm Metzger an immigrant from Wilhelmsdorf, Germany, opened his restaurant in 1928, Ann Arbor was predominantly German. “Even the church services were in German until the 1950s,” Metzger’s grandson John Metzger recalls. The small town’s restaurant scene reflected its demographics: Wilhelm’s brother Fritz bought the Old German restaurant from Gottlob Schumacher, and his brother Gottfried opened the Deluxe Bakery, where he baked dark pumpernickel bread for both Metzger-owned restaurants. 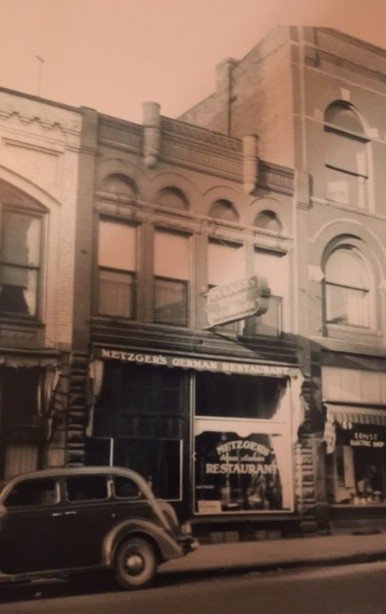 Nowadays, more than one in every 10 Ann Arborites claims German ancestry. For many of them, however, their only connection to the old world is a recognizably Germanic surname or a kid’s soccer schedule, listing matches at Eberwhite, Allmendinger and Bach. They don’t read German newspapers, or feel compelled to eat spatzen with sauerbraten at Metzger’s, the area’s last full-fledged German restaurant.

“We had to move or close up,” Metzger says. In 1999, the restaurant sold off a portion of its massive collection of German knick-knacks, ranging from souvenir plates to beer signs, and shut down.

“A lot of people thought we were gone for good,” says Metzger. But just over a year later, Metzger’s was resurrected off a highway exit nine miles west. The menu was unchanged, and the dining room – which seats 170 people, just like the former downtown location – was laid out to resemble the restaurant into which tens of thousands of customers had been welcomed by John’s mother, Ruth. (Walter Metzger, who died last year, visited the restaurant every day until he was 88.) For months after reopening, dinner lines stretched out the door.

“We were really worried it wouldn’t be the same,” Metzger says. “At first, people said ‘it’s not the same.’ But we don’t hear that anymore.”

John Metzger can’t imagine any of the new downtown restaurants will achieve his restaurant’s kind of longevity, now safely secured in the suburbs.

“There are a lot of good restaurants downtown, but they come and go,” he says. “Wood-fired pizza is fine once in a while, but we have people, some of them come in every day.” 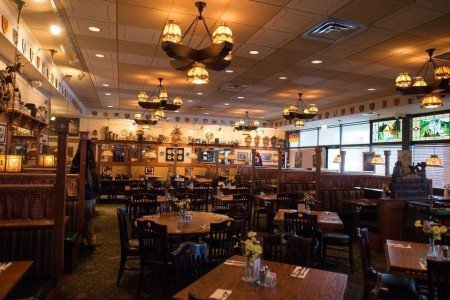 “I miss downtown,” he continues. “We had a lot of history. But we feel very blessed.”

The former Metzger’s is now a sports bar. Its patrons drink vodka cocktails out of martini glasses, instead of Spaten Optimator by the stein, a transition that’s bittersweet for Metzger and his relatives. But Metzger doesn’t have to miss the plaques and cuckoo clocks that the restaurant gave up when its future was uncertain.

“A lot of people brought stuff back,” Metzger says. “Some sold it back, and some just gave it to us. They said, ‘this stuff belongs here. We want you to have it.’ People like tradition.”

Jeff Jackson, owner of Seva, didn’t want the second Ann Arbor iteration of his vegetarian restaurant to be exactly the same as its first. 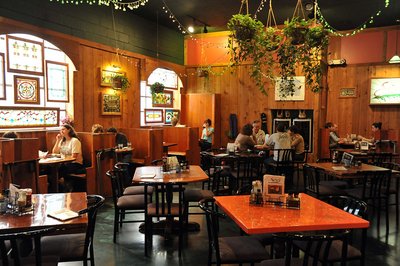 Jackson in 1997 purchased Seva from Steve Bellock, who in 1973 captured the college town’s avocado-and-alfalfa sprout ethos in a warren of cedar-walled rooms on Liberty Street. Over the succeeding decades, Seva menu items such as enchiladas Calabaza, soy sausage pasta and yam fries served with mayonnaise spiked with Clancy’s Fancy, a hot sauce developed in the 1970s by a woman trying to perfect tofu pepperoni, have become culinary touchstones for generations of Ann Arborites.

Despite the restaurant’s popularity, Jackson was never fond of its design scheme. Nor was he enamored with the old VFW hall’s upkeep hassles, downtown’s parking problems or the proliferation of competition. The number of restaurants in the four-block radius surrounding Seva surged from three or four at the time of its opening to nearly 50 in the early 2000s.

“I always thought the more the merrier, but it jumped the shark,” says Jackson, who opted to move after his landlord raised the rent. In 2013, a year after its downtown lease expired, Seva opened in a former Shanghai Express in a strip mall west of downtown. The restaurant’s new neighbors include Curves, Jersey Mike’s and Rite Aid (as well as a 70-year old shoe store that relocated from Main Street for reasons familiar to restaurateurs.) 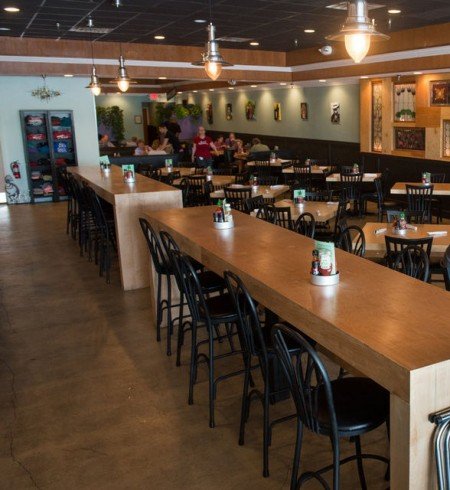 “In all honesty, we should have done it years ago,” Jackson says. “Our clientele is getting older: All the old hippies live on the west side of town. The biggest comment we had was, ‘you’re closer to me now.’”

A few stained glass windows and plants made the move west, but Jackson and his wife, Maren, largely relied on their regulars to summon the mood of the old location. Now facing a parking lot instead of a main thoroughfare that’s periodically occupied by parades and festivals, Seva still draws a crazy quilt of folks who don’t eat meat for religious, environmental, ethical or health reasons – or just because that’s what an increasing number of Americans are into. “Vegetarianism isn’t weird anymore,” says Jackson, explaining why the restaurant can comfortably stray from downtown.

“Behind all the urban groovy places, there’s someone with a lot of money,” he adds. “As a mom-and-pop, we can’t do what they’re doing.”

Transplanting restaurants isn’t new to Michigan. When a nostalgic Henry Ford in the 1920s began plucking buildings off the state’s landscape for Greenfield Village, his version of a preindustrial utopia, he made sure to bring a century-old roadside inn back to Dearborn. Relocated from Clinton, Michigan, the old stagecoach stop was initially “replenished with period furniture and pictures and nothing else,” according to a British journalist who sat beside Ford on a horsehair sofa there, but it was eventually remade as a working restaurant in which museumgoers could sip lemonade through macaroni straws. Today, the Eagle Tavern serves smoked whitefish pie, roast pork chops with walnut ketchup and brandy punch. 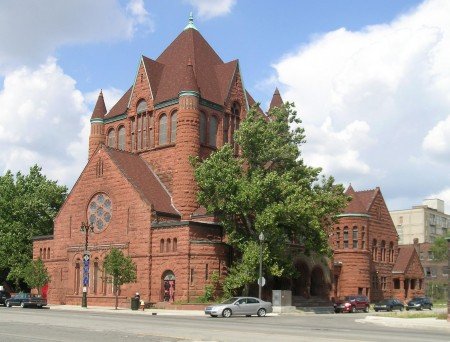 Ford, being Ford, never doubted that the Clinton Inn would flourish far from where he found it. That same confidence in the perpetuity of a community’s soul has set the course for church preservation in the region.

Detroit’s Ecumenical Theological Seminary is housed in a 125-year-old structure that’s a showpiece of Romanesque Revival architecture, despite being awkwardly trimmed during the Depression to make room for the widening of Woodward Avenue, then known as the nation’s busiest street.

“It’s probably the most beautiful church in the city,” Nancy Finegood, executive director of the Michigan Historic Preservation Network, says. But the maintenance bills associated with impressive details such as broad rounded windows and brick turrets yearning skyward are as formidable as the building itself, so the seminary has started gradually dismantling the building in order to save it. It’s sold off a statue and a stained glass window to fund its efforts to stay in a city that’s dwindled around it.

[blocktext align=”left”]“Preservation isn’t just about buildings. It’s about the people in the building.”[/blocktext]The seminary’s strategy is notable in downtown Detroit, which many other congregations long ago left. The building originally belonged to the First Presbyterian Church, but it gave up on the property in 1992.

As a preservationist, Finegood grieves a little every time a wrecking ball crashes into another architectural remnant of Detroit’s former splendor. But she also used to work at a synagogue in Southfield, so she appreciates the spirit of belonging that transcends the walls of even the most magnificent house of worship. As congregations have decamped to the suburbs, she says, they’ve thrived.

“Preservation isn’t just about buildings,” Finegood says. “It’s about the people in the building.”

Hanna Raskin is food editor and chief critic of The Post and Courier in Charleston, S.C. Her work has been recognized by the James Beard Foundation and the Association of Alternative Newsweeklies.