What Remains: An Interview with Matt Bell

Matt Bell’s new novel Scrapper, out this month from Soho Press, begins with a sweeping history of Detroit told from the Packard Plant floor. “See the body of the plant,” the novel directs us, as if sung by a ghostly chorus. “One hundred years of patriots’ history, fifty years an American wreck.” Under the MO_OR CITY IN_U_TR_L PARK sign, we move through engineers working beneath the first generation of electric lights, to seamstresses stitching car seats, to war production, to new freeways for Detroit-built cars to speed down, to two million people in America’s fastest growing city, and then to closure and ruin.

At the end of this prelude we arrive at Kelly, a metal scrapper who scavenges the empty factories and uninhabited homes of what Bell calls a “mythic, exaggerated” Detroit. When Kelly finds a kidnapped boy chained up in the basement of an abandoned house, his solitary life sorting through the wreckage of the city is interrupted. The story that ensues explores regret, redemption, and the cost of violence in both our private lives and on the global scale of racism, war, and industry.

I spoke with Matt Bell about Scrapper and writing about Detroit. 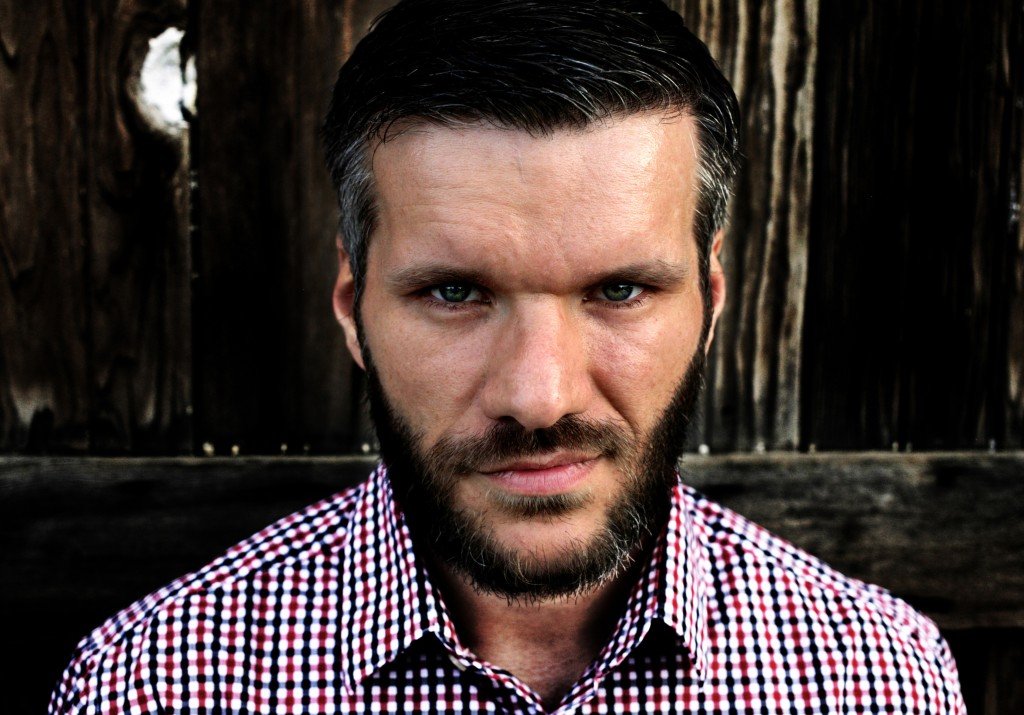 BELT: Scrapper begins with an evocative description of the Packard Plant, which has become such an iconic image of Detroit’s ruins. Of the thousands of empty houses and buildings in the Zone, what special resonance does the Packard Plant have for the novel?

Matt Bell: The Packard Plant was a building I was familiar with even before I knew its name or its history: I often saw it driving around Detroit, given its location, and of course it features so heavily in the history and photography of the city that anyone beginning to read about the city can’t help but run into it over and over. As I started researching metal scrapping and abandoned buildings, it came up often, as image and symbol and problem. It was one of the first specific locations I wrote about — but I didn’t visit it personally until I’d already written the first versions of the scenes that take place inside the ruins of the plant. There was something incredibly powerful about that physical visit, after having spent so much time there imaginatively, confirming much of what I’d written while also suggesting new details I never would have otherwise known and correcting the occasional terrible error.

[blocktext align=”right”]I think the perception of Detroit from outside it rarely matches the version people who actually live there have of their city…[/blocktext]I don’t want to unpack too much of the book’s logic — I’d prefer that happen in the reader — but I do think it’s notable as a decades-old ruin, as a seemingly unsolvable problem for the city, and as a remnant of the greatest days of both the automobile industry and of the city Detroit seemed it would become. It’s a fascinating place on its own, as well as a sort of Rorschach test for anyone writing about the city.

BELT: I’d love to know about your relationship with Detroit as a Michigander and writer, and how that relationship has changed through the process of researching and writing Scrapper. In the book’s acknowledgements you reference research trips to Detroit — what were you looking for? How did those trips help shape this novel?

Bell: I grew up in a small town called Hemlock. Kelly, the book’s protagonist, is from a small town north of Detroit that’s a version of that town, and so his version of Detroit is somewhat similar to the one that I think existed where I grew up. It’s not quite the real Detroit, but rather a sort of mythic, exaggerated version of the city. It was important to me that Kelly’s take on the city reflect the one I grew up with: the perspective of an outsider, the perspective of someone who had been told that the city was something you had to be warned about. I think the perception of Detroit from outside it rarely matches the version people who actually live there have of their city — and the flaws that come from that difference are an important part of the statewide and national conversation about the city, as well as the source of endless misunderstandings.

[blocktext align=”right”]…put that trait or occupation or desire into motion in the world, and from it everything else can be discovered. It’s an uncertain but exciting way to work, and for me the mysteries that inevitably arise are enough to sustain me throughout the work ahead.[/blocktext]The main thing I was researching during my visits while I wrote Scrapper was the metal scrapping itself. It was something I knew almost nothing about before I started writing, and so I needed to see firsthand both the sites where it had occurred and the way it was done. Those trips were short but intense and immensely important to the final drafts of the book. More than anything, what I wanted was how it felt to be in these emptied buildings, in certain neighborhoods being reclaimed by nature. I had an idea that there were places in the center of Detroit where you could stand in what was essentially pasture, looking out toward the better-lit, more populous parts of the city. It was quite a different thing to actually be in such a place, listening to the crickets and the distant sounds of traffic, watching the streets go dark while the buildings in the distance turned their lights on.

BELT: One of the things that immediately commands the reader’s attention in Scrapper is its distinct lyric style. The repetition of “See” that begins the novel and returns in a later chapter feels like a command to the reader to bear witness — “See the body of the plant… See the factory roads… See the dust…” How did you develop the musicality of Scrapper’s prose, and what do you hope it evokes in the reader?

Bell: I’m always interested in the acoustics of language and what might be implied by the structure of sentences — I don’t particularly believe in “invisible” or “transparent” prose, which is really just code for “conforms to an accepted standard.” I’d rather language that calls attention to itself, that rewards a certain kind of care from the reader. In Scrapper, I hope that the kind of litany that begins the novel invokes a sort of grandeur from the very start: a largeness of landscape and architecture against which the human drama of the book can play out. Kelly appears only in the final sentence of that opening chapter, and the hope is that his movements get seen against the bigger backdrop of history and landscape that surrounds the action of the plot.

BELT:Throughout the novel, there are seemingly digressive chapters that move away from Kelly and Detroit and take on larger events — the Trayvon Martin shooting, Chernobyl, Yasiin Bey’s work with the organization Reprieve. How did you see these events intersecting with Detroit, and with Kelly? 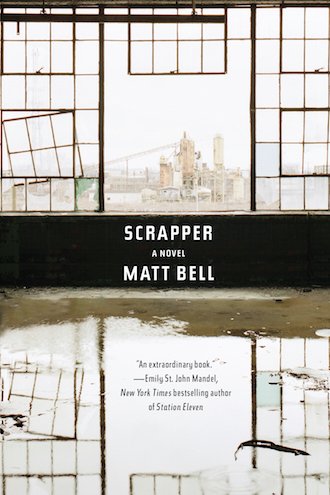 Bell: Because the novel demands that its themes be shown through the lens of a character’s sensibility, those themes inevitably narrow toward the character’s worldview. But just because Kelly has a certain tunnel vision doesn’t mean the book has to, and those interludes were an attempt to widen the scope of the book. For me, these three interludes have certain parallels with Kelly’s story, most notably that they too are about cycles of fear and violence, the way that violence by one party creates fear in another, who often responds with violence of his own, but they take place in different landscapes, between different groups of people, which I hope allows the novel to interact more widely with the struggles of its time.

BELT: You use an epigraph from Philip Levine. There have been quite a few books set in Detroit the last few years — Angela Flournoy, Benjamin Markovits, NoViolet Bulawayo, Bill Morris, Lauren Beukes. Do you see yourself in dialogue with these writers?

Bell: There have always been great writers in Detroit, and writers from elsewhere writing well about the city. Poets, especially, seem incredibly vital to the literary legacy of Detroit, and it’s the poets who live there now that I think make up the most important part of the city’s literary life force. What’s interesting about most of the writers you mention is how we must have all been writing our books during overlapping times: It’s unlikely that any one of us could influence any other. Instead, we get the pleasure of all generating and then sustaining a conversation, one that hopefully gains more attention the more voices join in.

BELT: Kelly grapples with two sides of himself — the destructive Scrapper and the Salvor who holds the possibility of redemption. That duality is mirrored in Detroit — a place poised between destruction and renewal. What advice do you give your creative writing students about choosing the right place for the right story and developing setting?

Bell: For me, the process works in the opposite direction: I began with the action and the setting (metal scrapping in Detroit) and build outward from there. In the early days, I knew nothing about Kelly, not even his name. All I had was a metal scrapper, alone in the city, and all I knew to do was to keep him working, keep him taking action in scene. From there, I started to see what he noticed, what choices he made — and the more I wrote the more those notices and choices diverged from my own, which meant that I was getting closer to writing a character who wasn’t me. This is the more common order of events for me: I rarely (if ever) start with a fully known character. Maybe I know only a single trait, an occupation or a desire. That’s enough to get started: You put that trait or occupation or desire into motion in the world, and from it everything else can be discovered. It’s an uncertain but exciting way to work, and for me the mysteries that inevitably arise are enough to sustain me throughout the work ahead.