Within The Convention City, A Ghost Town

Some guy is sprawled out on the steps at the front edge of the speaking stage below the Moses Cleaveland statue, fast asleep.

A few people are milling about, but for the most part it feels as though a random lazy Wednesday fell smack into the middle of convention-week hell. It’s quiet. Quiet enough to sleep in the name of free speech. The sidewalks are clear. The sun is shining. Sparrows alight on the barricades. 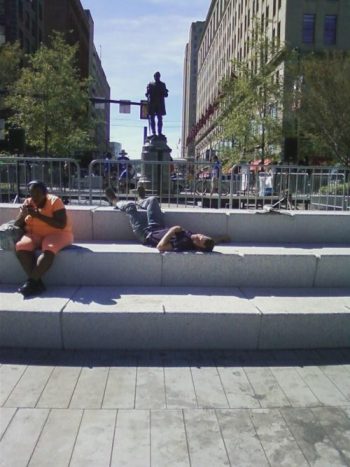 If there was anyone to talk to, we’d probably talk about the weather.

Only when I start walking over to East 9th Street and see the tall black steel barricades does the feel of hyper-preparation return, and even here the sidewalks are sparsely populated, save for a small troop of State Highway Patrol officers passing by, hatted and jovial.

A ghost town of sorts has taken hold right in the middle of the convention chaos. Many businesses have closed for the week, offices and parking lots are half empty, traffic is gloriously light, restaurant tables are available. The real Cleveland that exists beyond the false front of banners and bunting and news network booths, of transient vendors and credential-wearers is, like that guy on the steps, napping.

Cleveland did such a good job of preparing for the worst that it has breathed new life into Yogi Berra’s old malapropism: “Nobody goes there anymore. It’s too crowded.”

The cavernous tile-floored lobby of one of downtown’s signature office buildings is empty, save for the lone security guard behind the desk at the far end, where he sits beneath large banners depicting the old Flats district. A woman enters through the glass front door. The clicking of her heels echoes up to the second floor balcony. Music trickles from the empty coffee shop. I cough, just to hear myself. 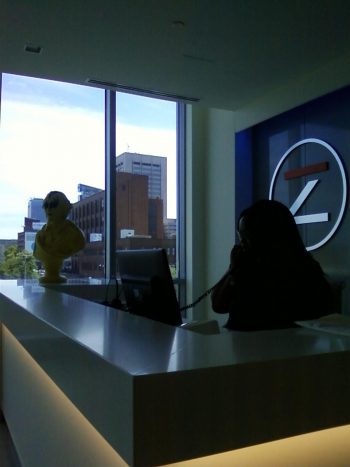 I take the elevator up to the fourth-floor law offices of Zashin & Rich, where the legal assistant at the reception desk, Danielle James, has plenty of time to chat.

“It’s been dead!” she says. “A lot of people assumed we were closed. On a normal day, I’d have interrupted you 20 times to answer the phone, take deliveries.”

The firm is operating on a skeleton staff, with most of the employees taking vacation or working from home. James tells me that of the 13 tenants in the 23-story building, only four are open. This story is playing out across the city, as the hype of preparation encouraged many to avoid downtown altogether.

“Traffic has been lovely,” she says. “Everyone expected this huge crowd and all this chaos, and we didn’t get it. I expected the worst. Listening to the news, it’s like they wanted to incite fear.”

The phone rings. James answers. It’s one of the attorneys, working from home.

Jay Jones’ street-vending table is neatly arranged with proud Cleveland-themed T-shirts and caps – Browns and Cavs and logos touting the city itself. The table and an accompanying stand are conspicuously full.

“Has business been slow?” I ask him.

“Definitely,” he says. “Definitely. They hyped it up. It seems like they over-planned. I was expecting better business than this. Way better.” 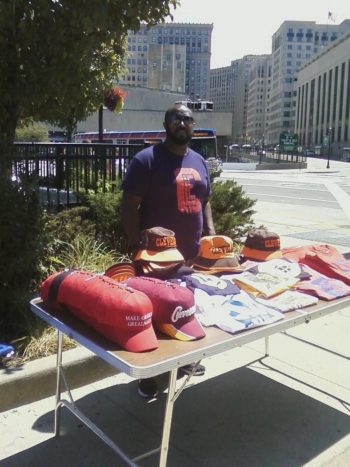 The weird split personality of downtown finds its counterpoint here, where many of the national media outlets have taken up residence, with MSNBC’s outdoor broadcast booth and Twitter’s convention headquarters and the Washington Post’s satellite office drawing tourists and attention junkies and fashionable anarchists, like gulls to a fish market.

Over the din of the crowd, a woman plays an amplified saxophone. A man in a black Donald Trump T-shirt, his arms and bald head painted silver, dances, then freezes into a pose, holds it for a long beat, then breaks back into dance.

A man at a souvenir stand shouts, “RNC T-shirts! RNC T-shirts!”, and as if that wasn’t enough, he’s got a dog in a pen behind his table and the dog is barking incessantly.

“Scooby!” he scolds, then goes back to his T-shirt chant.

I slip out of the pandemonium and into the Arcade food court, where I’m meeting a friend for lunch. Plenty of tables are available. We sit and talk. It’s peaceful in here, even with the circus just outside the door.

I tell him, not joking, that I’ve made a point of keeping my reporter’s notebook visible when I’m in this area, so I won’t be mistaken for a random Clevelander by yet another reporter looking for local color.

This week, though, it just doesn’t seem there are many men on the street.

As we leave the arcade, I notice a lot of “Closed” signs on the businesses in the sunlit atrium.

A flier hangs on the door of the Nutrifit shop.

“We will be closed Wednesday and Thursday.”