“Tired of Going to Funerals”: The 1972 National Black Political Convention in Gary


They agreed that black prisoners should receive fair trials, that black Americans should not die years earlier than white counterparts, that black workers should be afforded a living wage, and that black candidates should be given opportunities to craft legislation that affected their communities. They shared a collective outrage. In 1972, organizers asked them–Americans of color affiliated with Socialists, Democrats, Republicans, Nationalists, and the Black Panthers–if they could overcome differing ideologies to channel this outrage into political action at the National Black Political Convention (NBPC) held in Gary, Indiana. Black poet and activist Amiri Baraka (formerly LeRoi Jones) advocated for the gathering to practice “unity without conformity.”

According to an essay in Major Problems in African American History, the Gary convention was the culmination of a series of uprisings in protest of discrimination, which historians refer to collectively as the Black Revolt. Black Americans were emboldened by tragic events, such as the assassination of Malcolm X in 1965, as well as legislative progress, like the Voting Rights Act of 1965.  In an interview, North Carolina convention delegate Ben Chavis recalled:

“I had gotten tired of going to funerals. . . . so much of the Movement had been tragic. You know. And I have to emphasize [Rev. Martin Luther] King’s assassination was a tragic blow to the Movement. And so four years later, March of ’72, for us to be gathering up our wherewithal to go to Gary, Indiana–hey, that was a good shot in the arm for the Movement.”

Historian Stephen Grant Meyer identified 1968, when King was assassinated, as the year in which the modern civil rights movement began to diverge. No longer was integration the primary means to make political and economic gains.  This fracture gave rise to a Nationalist faction, which sought to promote black identity and improve living conditions through a separate black nation. The polarization was reminiscent of the late-19th and early-20th century debates between reformer Booker T. Washington and intellectual W.E.B. Du Bois, who both worked to ease the economic and social plight of African Americans. Washington believed this was best achieved by earning the respect of white citizens through hard work and self-help. Du Bois, on the other hand, believed white oppression should be cast off by protests and political activism, in large part through the National Association for the Advancement of Colored People (NAACP), an organization he co-founded. 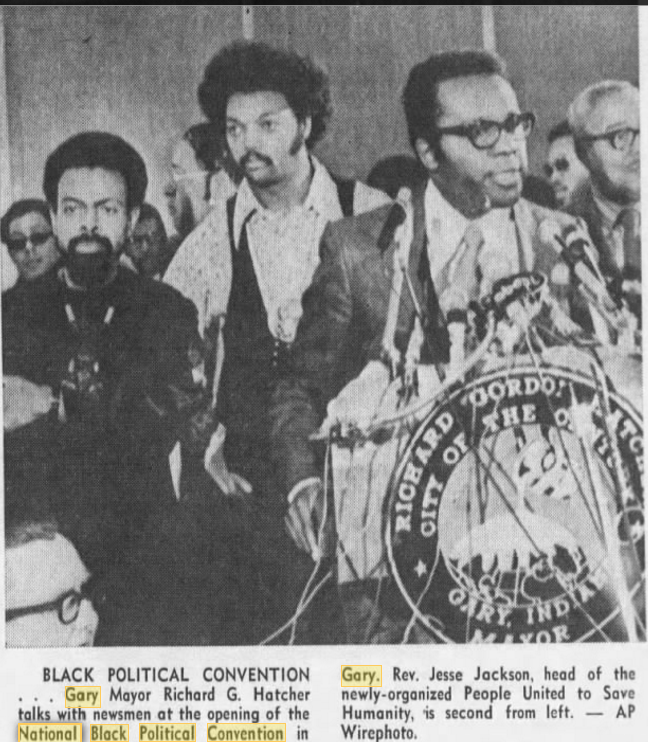 NBPC organizers, who had begun planning the conference in 1970, struggled to find a city willing to accommodate an influx of politically-engaged black Americans. Gary Mayor Richard G. Hatcher, an advocate of civil rights and minorities and one of the first African American mayors of a major U.S. city, volunteered his predominantly black city. Not since the 1930s, with the first meeting of the National Negros Congress in Chicago, had such a massive and diverse gathering of people of color convened to advance their rights. Approximately 3,000 official delegates and 7,000 attendees from across the United States met at Gary’s West Side High School from March 10 to March 12. The attendees included a prolific group of black leaders, such as Reverend Jesse Jackson, Coretta Scott King, U.S. presidential candidate Shirley Chisholm, Amiri Baraka, Muslim leader Minister Louis Farrakhan, Black Panthther co-founder Bobby Seale, and Malcolm X’s widow Betty Shabazz. Organizers sought to create a cohesive political strategy for black Americans by the convention’s end.

The high school, decorated with red, white, and blue bunting, thrummed with activity. As vendors sold books, banners, and souvenirs, a band prompted snapping and feet-tapping with “gutsy,” drum-driven music. The Munster Times reported “Two or three white reporters, their faces split with grins, were lost somewhere with the music. A policeman absentmindedly slapped the butt of his pistol to the beat.” Delegates ranging from “pinstripe-suited conservatives to youngsters in colorful flowing robe-type shirts [dashikis] and mod fashions to the black-uniformed para-military” milled about the gym waiting for the delayed convention to finally start. Organizers scrambled to respond to complaints that the elevated platform for journalists blocked the stage.

Entertainers like James Brown and Harry Belafonte lent their support to the convention by performing. Comic and civil rights activist Dick Gregory, weighing ninety pounds as a result of fasting to protest the Vietnam War, addressed the audience about issues of policing and drug access and asked, “‘[H]ow can a black kid in Harlem find a heroin pusher and the FBI can’t?’”

State delegations, national organizations, and individuals proposed resolutions in the creation of “A National Black Agenda” (Muncie Evening Press). This agenda would extend the movement beyond the convention. As convention attendee and Distinguished Lecturer at York College City University of New York Dr. Ron Daniels noted, the Black Agenda was “integral to holding candidates, who would seek Black votes, accountable to the interests and aspirations of Black people.”

Delegates from Illinois suggested fines and prison sentences for businessmen found guilty of discriminatory practices. North Carolina attendees proposed a bill of prisoners’ rights that included humane treatment and fair trials. Delegates from Indiana and other states demanded that the U.S. dedicate resources to the plight of black Americans rather than the Vietnam War and end the conflict immediately. North Carolina representatives also urged that black men receive Social Security benefits earlier than white men since their life expectancy was eight years shorter. The Muncie Evening Press noted that “Politicking was intense…as state delegations tried to compromise their own views with positions they felt other delegations could support.” Tensions ran so high that part of the Michigan delegation walked out of the convention.

Keynote speakers Reverend Jackson, executive director of P.U.S.H. and Operation Breadbasket, and Mayor Hatcher ignited the crowd and “stoked rhetorical fires aimed at molding the diverse black communities represented here into a solid unit that can tip the political balance this presidential election year and from now on” (Munster Times).

While similar in many aspects, the men’s speeches hinted at the divergence in philosophies pervading the convention. Hatcher believed change could come from within the existing two-party system, so long as the parties responded to the needs of African Americans. However, if legislators continued to neglect black constituents, black Americans would create a third party and, he told attendees, “we shall take with us the best of White America…many a white youth nauseated by the corrupt values rotting the innards of this society…many of the white poor…many a White G.I….and many of the white working class, too.” The party would also welcome “chicanos, Puerto Ricans, Indians [and] Orientals” (Indianapolis Recorder).

However, Jackson, appealing to Nationalists, urged the immediate formation of a black party, potentially called the “Liberation Party.” He asserted “‘Without the option of a black political party, we are doomed to remain in the hip pocket of the Democratic party and in the rumble seat of the Republican party’” (Kokomo Tribune). Jackson also called for the establishment of black institutions to oversee black educational, economic, and judicial matters. He asked the crowd “what time is it?” and the audience, electrified, shouted “It’s Nation Time!”

Jackson’s proposal drew criticism from some black organizations, like the NAACP, which believed that continued segregation, albeit black-led, would impede progress. According to Major Problems in African American History, the NAACP circulated a memo at the convention denouncing the proposal of a separate nationhood for African Americans and criticizing the rhetoric for being “‘that of revolution rather than of reform.’” An Indianapolis Recorder editorial articulated this point, noting “The only road to nationwide achievement by a minority is through cooperation with the majority.”

Another contentious issue in the 1970s: school desegregation through the forced busing of black children to white schools. The Jackson faction opposed busing and defined successful black education not as being able to attend white schools, but rather as children attending black-led schools. The endorsement of the presidential candidate that would best represent black interests also generated conflict at the convention. Some delegations supported Democrat Shirley Chisholm, America’s first black Congresswoman, while many Nationalists wanted a leader from a black party.

After intense debate, a steering committee tentatively adopted a National Black Agenda. The committee officially published the sixty-eight-page document on May 19, Malcolm X’s birthday. The resolutions included black representation in Congress proportionate to the U.S. black population, a guaranteed minimum income of $6,500 for four-person households, a 50% cut in the defense and space budgets, and an end to national trade with countries that supplied the U.S. drug market. The resolutions, designed to move black Americans towards “self-determination and true independence,” represented major, yet tenuous compromise among the black community.

The steering committee also formed the National Black Political Assembly, a body tasked with implementing the Black Agenda. Dr. Daniels noted that, although many of the agenda’s resolutions never materialized, “thousands of Black people left Gary energized and committed to making electoral politics a more relevant/meaningful exercise to promote Black interests.” He attributed the quadrupling of elected black officials by the end of the 1970s, in large part, to the Gary convention and the “audacity of Black people to…defend black interests.” The NBPC was notable too for its inclusion of black Americans from all walks of life, rather than just prominent black figures, in formulating how to ease the struggles of the black community. The Recorder also noted that Mayor Hatcher’s reputation “has been considerably burnished in the white community as well as the black by the success of the historic event” (Indianapolis Recorder).

In 2012, Gary hosted the 40th anniversary of the National Black Political Convention. Speakers discussed the issues that had prevailed into the twenty-first century, such as a disparity in prison sentencing and poverty. One speaker remarked that without Shirley Chisholm, America’s first black president Barack Obama would not have occupied the White House. Another speaker, who ran for mayor of Baltimore, lamented that forty years after the convention “we’re still asking what to do instead of how to do it.” When asked if it was still “nation time” one speaker responded “it’s muted nation time.” Black Americans, they agreed, needed to “have the audacity.” ■