Sixty years ago, a major section of the West End (a Cincinnati, Ohio neighborhood) was bulldozed and flattened so a new neighborhood and interstate highway could be built through it. The new neighborhood would be called Queensgate, and the new highway would be called I-75. This urban renewal project would be called Kenyon-Barr (named after two streets in the neighborhoods located in the scope of the project), and it would lead to the displacement of 25,737 residents, ninety-seven percent of whom were non-white.

The Kenyon-Barr project sort of had good intentions. In a post-WW2 society many people were leaving cities and moving to new subdivisions in the suburbs, which led to a loss of tax revenue for cities. If cities weren’t able to stem the loss of revenue it could lead to a lot of bad things, like not being able to afford essential services. The federal government was deep in the effort of building a nationwide network of highways and it was planning to build several throughout the Cincinnati region, including the Mill Creek Expressway (I-75). The city of Cincinnati had the idea to attract industrial companies to move inside the city limits by creating a new neighborhood located right by one of the new highways, which would allow companies located there to easily transport goods and services. By creating Queensgate and having new industrial companies, there would be an increase of jobs within the city limits and an increased tax revenue. Having I-75 run through the city would in theory allow people to drive to their destinations faster and decrease congestion on city roads.

Unfortunately, these plans hinged on the destruction of the heart of Cincinnati’s black community. The West End at the time was a dense, thriving, and vibrant community that was slowly destroyed so Queensgate and I-75 could be built. The people who lived in the West End did not have the ability to fight back against the urban renewal project like other whiter and wealthier neighborhoods in the city might have been able to. Impacted West End residents were also promised better housing and amenities if they supported the project. Over six years, the Kenyon-Barr project demolished most of the West End to create Queensgate and make way for I-75. As of 2010 only 6,627 people live in the West End and 142 people live in Queensgate, as most of Queensgate is now home to industrial business and warehouses. The city photographed many of the buildings located in the West End before they were destroyed by the project, and some of those photos are located below.

I’ve lived in the West End since October 2018, before which I lived in Mariemont (an affluent Cincinnati suburb) and before which I lived in Hyde Park (an affluent Cincinnati neighborhood). I love the West End because it’s beautiful and unique. My apartment building was built in the late nineteenth century and judging from historical photos I’ve been able to find, my apartment unit used to be a barbershop. Streetcar tracks used to be on my street and there used to be a Car Barn down the road, where streetcars were housed and serviced. The West End is one of the poorest neighborhoods in Cincinnati, but it has a better sense of community and nicer people than the more “well-off” places I’ve lived in Cincinnati. I learned about the Kenyon-Barr project before I moved to the West End, and it broke my heart to learn about something that caused so much heartache and pain for the people who lived in this neighborhood before me, just so I could have the luxury to sit in I-75 traffic every day. 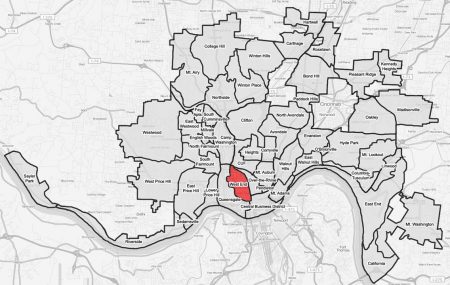 One of the hardest things about living in the West End is knowing what used to be here before urban renewal and years of disinvestment from the city. Whenever I look at old pictures of the West End from the Forties and Fifties, I see a thriving, beautiful, and dense neighborhood. One of the reasons the West End was destroyed was because even though it was a thriving neighborhood, the people who lived here at the time were deemed not important enough. American urban renewal projects during this time were rooted in racism and classism. Most Interstate highways that snake through cities were routed through neighborhoods that used to house non-white people because it was cheaper to acquire their homes and neighborhoods than white and wealthier ones.

Another hard part for me about living in the West End is knowing what the people who were displaced from here faced when they had to leave. Redlining was still legal during the time the Kenyon-Barr project occurred, which meant black Cincinnatians had an extremely limited supply of neighborhoods in the city they were able to find homes in (page 73). To address displacement caused by the project, the city planned to build new public housing to house the former West End residents. Unfortunately, the public housing that was eventually built was nowhere near enough to house everyone who was displaced, and some of the limited housing built was segregated – meaning almost all of the people displaced from the West End were excluded from living there. Some people were able to move into already integrated neighborhoods like Avondale and Mount Auburn, but many families had to leave the city of Cincinnati entirely because they couldn’t find new homes in the city. I can’t imagine how hard it must have been to lose your home and have to leave all of your friends and everything familiar to you simply because of your skin color.

Another hard part about living in the West End is knowing that sixty years later, the Kenyon-Barr project was a complete failure. Queensgate is an extremely undesirable place to be in. Apart from Union Terminal, the rest of the neighborhood is full of unfriendly warehouses, wide roads, and giant nondescript buildings. To be fair, this was probably exactly what the city wanted Queensgate to become when the Kenyon-Barr project was born, but I still consider it to be a failure to have a giant neighborhood in the urban core no one wants to be in. I also consider I-75 to be a failure. The people who envisioned the American interstate system wanted it to be an efficient system to get people from Point A to Point B and relieve congestion from city streets. Sixty years later, we’ve seen that highways have encouraged more and more people to drive, and have increased congestion. In my opinion, all of the positives Queensgate and I-75 may have brought to Cincinnati will never be enough to justify the human cost of displacing over twenty-five thousand people.

Unfortunately this piece doesn’t have a happy ending. I can see I-75 from my bedroom window, and it serves as a constant reminder to me of the Kenyon-Barr project. I can’t help but imagine what the West End could have been had the project never happened. In 2020, apart from the main thoroughfares like Linn Street and Liberty Avenue, most of the neighborhood is usually dead. After decades of disinvestment and lack of attention from the city and general public, the West End started to receive awareness again when FC Cincinnati announced they wanted to build a new soccer stadium here. Money was finally going to start pouring into the neighborhood again, and surely people would have a reason to visit! Unfortunately that attention has come with a lot of worry, as many West End residents are concerned the new stadium and the plans FC Cincinnati have for the area will result in gentrification and displacement – in fact some residents have already been displaced due to living near the stadium footprint.

My hope is that more people will learn about the places where they live and apply those lessons to the future. ■

Cailin Pitt is an artist and software developer living in Cincinnati, Ohio. This essay originally appeared at cailinpitt.com.

Cover image: Aerial photo of the West End neighborhood in the 1950s, before the construction of I-75. Image via University of Cincinnati libraries.