A Locals’ Guide to Gary, Indiana

Rectangular brown Interstate signs guide visitors to Gary’s major attractions: the Indiana Dunes National Park, the Gary Railcats baseball stadium, the “Home of the World-Famous Jackson 5.” Much has changed from the 1990s, when the police union placed billboards warning passing motorists that they were entering the murder capital of the United States. These streets have seen many challenges, but Gary residents stay fiercely proud of their city. This isn’t the first “24 hour” guide to Gary—from a regional, independent, or corporate media outlet—but it’s the first to be informed entirely by local residents.

Gary’s Prime Meridian is Broadway. (North to south thoroughfares are Streets, east to west thoroughfares are Avenues.) Traveling east from Broadway the streets are named for U.S. states in order of admission, and on the far east side, Indiana counties in alphabetical order. Traveling west from Broadway, Presidents and Vice Presidents are in sequential order. Avenue numbering begins at U.S. Steel Gary Works and increases as you travel south to Gary’s city limit at 53rd Avenue. And for a soundtrack: you can’t go wrong starting your trek by streaming Gary’s own Grammy-nominated artist Freddie Gibbs ‘Live by The Game’ at least twice. 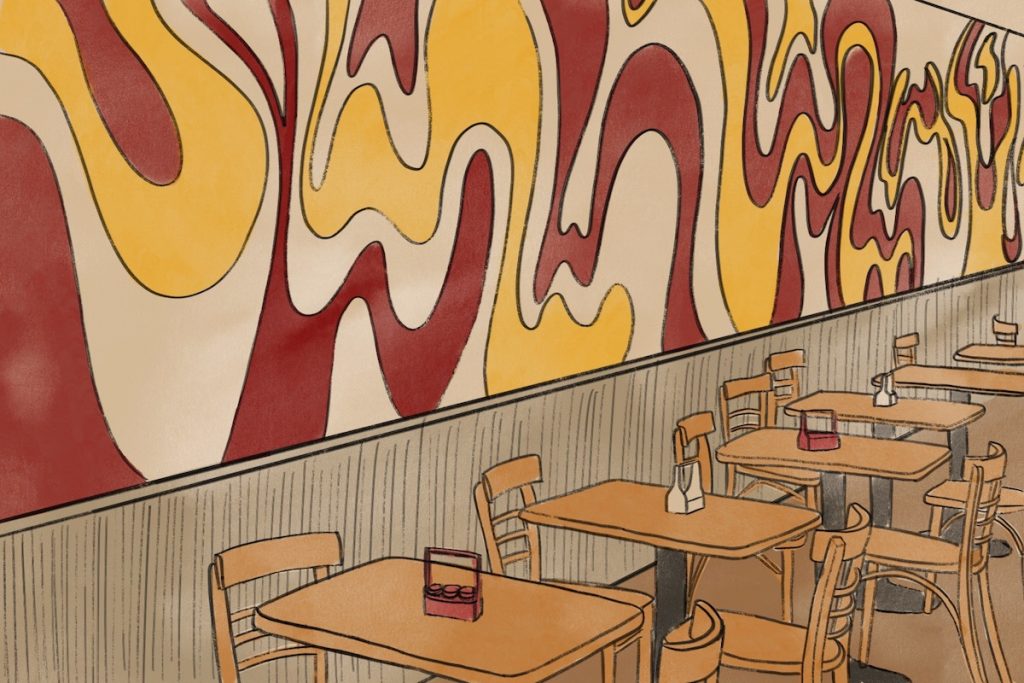 J’s Breakfast Club (3669 Broadway) is nestled in the heart of Gary’s University Park neighborhood. Walking in feels like a big hug and you are invited to sit wherever you like. They are open 7 a.m.- 3 p.m. for breakfast and brunch, Mondays through Saturdays. J’s Shrimp-n-Grits and the Chicken & Waffles are my favorites. If visiting on Sunday, try the Soul Food Sundays (11 a.m.-5 p.m.). J’s Breakfast Club is definitely the place for good home cooking; the selection brings back memories of Grandma’s dinners after Church. They complete the dining experience with live entertainment.

The entrance of the former Army Reserve Center (3510 West 15th Street) is modest, but guests are greeted by an impressive American flag of red, white, and blue petunias and fruit producing trees. Farm-her Carmen is truly the secret to fully experiencing the garden. On her walking tours participants learn about the plants in the garden, the best ways to use them, and tips to start their own gardens. Carmen also encourages everyone to take a moment (and a seat) to listen to the sounds of the birds and beehives and get their hands dirty by either planting or harvesting some of what is grown here. (Also: every flower and herb grown at Oases Botanical Gardens is edible, whether raw, steeped into tea, or cooked into a sumptuous meal.)

Guests are welcome to indulge their senses at Oases Botanic Gardens throughout the agricultural season (mid-April through mid-October) on Mondays and Tuesdays from 9 a.m. to 2 p.m. or by appointment. Additional information can be found on Instagram. 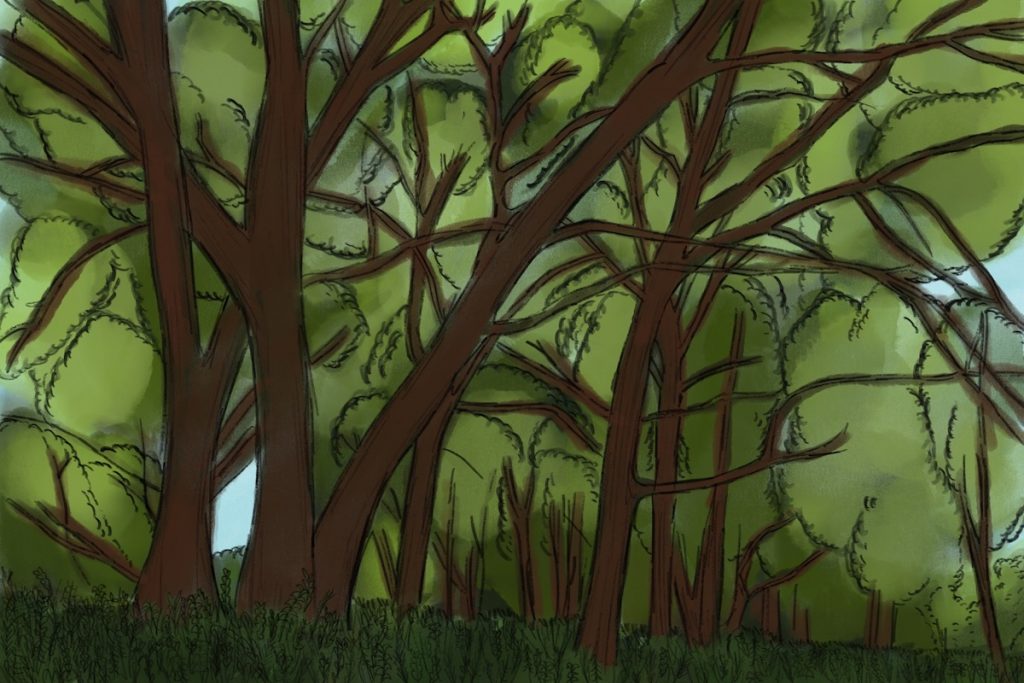 Ivanhoe South Nature Preserve is located on the wider west side of Gary, offering fifty-three acres of natural greenspace with a globally rare remnant of dune-and-swale, accompanied by a splendid habitat of black oak savanna. Visitors can enjoy the seasonal colors of the many native plants and wildflower species along a flat-terrained loop hiking trail, starting from the small parking lot on Colfax Street, between 7th and 8th Avenues.

The Gary Greenlink Trail interprets the industrial heritage of the region and also encompasses a globally rare ecosystem of dune and swale, along with many species of native plants and wildflowers. This short neighborhood greenway provides recreational opportunities as a multi-use, flat terrain trail for walking, running, hiking, and cycling, with a trailhead located at Roosevelt and 2nd Place in Gary’s Ambridge neighborhood.

Big Daddy may be a big teddy bear of a man, but when it comes to boogieing on that barbecue grill, he’s a baaaaad, baaaaad boy. At Big Daddy’s BBQ (4213 Cleveland St.) you’re getting authentic, award-winning Midwest-style barbecue. Big Daddy has twice won Steve Harvey’s “#1 BBQ Neighborhood Award,” and in 2011 he won the Facebook & American Express “Big Break Contest.”

If hotlinks and polish are your thing, Big Daddy’s got the Chicago-style Maxwell St. Polish famous the world over. If chicken’s more your bag, he’s got it fried, jerked, and of course BBQ’d. Same goes for the turkey! Beef Brisket or pulled pork sandwiches are more than enough to make dinner for a hungry family. Me personally, I get my rib tips with the yams, and you can’t tell me nothing for about four or five hours.

But don’t believe me. Some things have to be experienced for themselves. 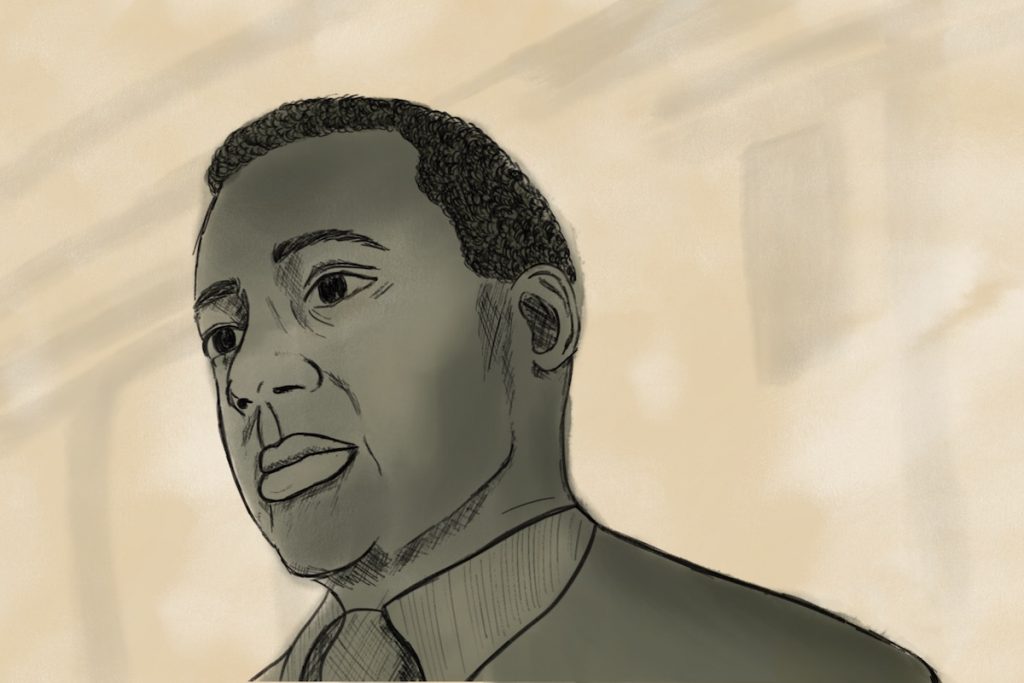 If history is your interest, head downtown and hit some of the artwork. The Richard Hatcher statue stands in front of City Hall. The Metro Center has Richard Hunt sculptures inside and outside. Genesis Plaza has the Fusion installation (a steel mill ladle as a centerpiece is #ChefsKiss). Two parking garages are multi-story murals thanks to the Paint Gary project. And if murals are your thing, the one by Felix Maldonado inside of the Gary Public Library and Cultural Center is the best. And then there are the historic buildings, vacant and otherwise, from Christ Episcopal and City Methodist Churches to Union Station.

Further south, the University Park (35th & Broadway) and Morningside (45th & Broadway) neighborhoods provide historic residential architecture. Morningside, at the nexus of two old streetcar lines, is one of Gary’s best examples of historic transit-oriented development. Related: these areas are less than fifteen minutes from downtown by car or by Rapid Bus.

2300 Jackson Street is truly a home of legends, the embodiment of a twentieth century fairy tale where a family of nine children rose from such humble beginnings. The eight hundred square foot abode is now enshrined by ornamental fencing and manicured boxwoods. The colonial revival brick building that dwarfs the Jackson Family home immediately to the west is former Theodore Roosevelt High School. The school cultivated the talents of George Taliaferro, Fred Williamson, Avery Brooks, Glen Robinson and countless others that went on to influence society and Post-World War II popular culture.

To set the mood ahead of your arrival I highly recommend you stream “I’m Going Back to Indiana” by The Jackson 5. When you arrive, play “Always Home” by the-then seasoned family group The Jacksons. The magic and energy of these heartfelt tracks convey how much of an impact Gary, Indiana made on the family’s success. 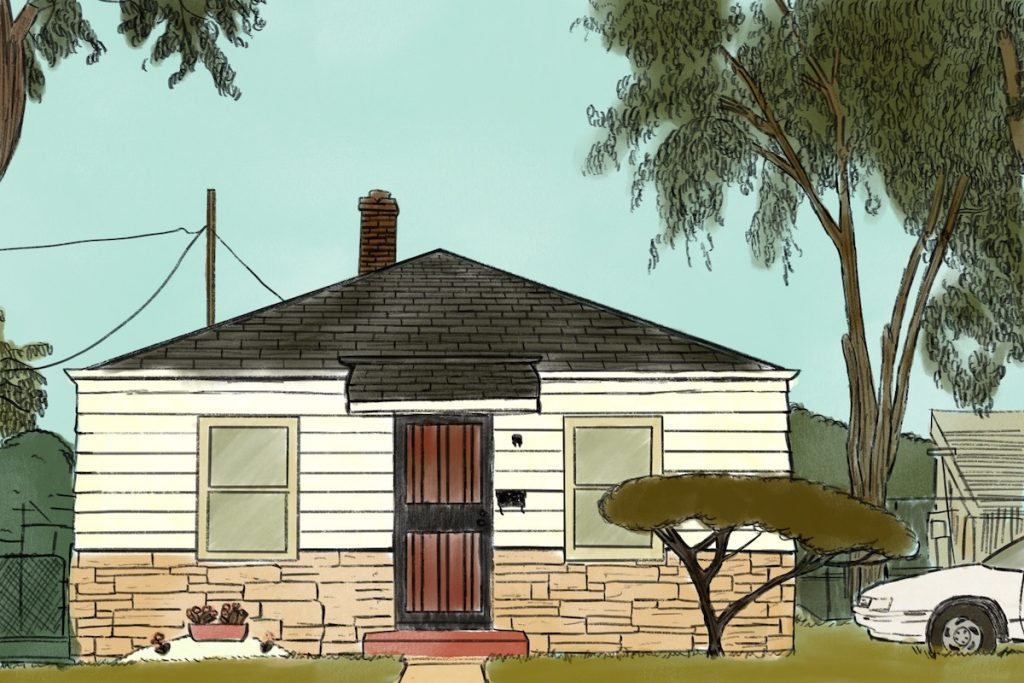 On the 4400 Block of Broadway you’ll find my ideal location for casual comfort food and conversation with a small group of friends on a Friday evening and that’s at Buzz Box Wings. The fried alligator tips are my personal go to, fry my tips hard please! If you still desire to experience the night out on the same block, Que’s Lounge offers a range of rap music, stiff drinks, and the opportunity to strike conversation with real Gary people.

When the evening is winding down and you are ready to take in a spectacular dance of colors, head over to Marquette Park (1 North Grand Boulevard) for an array of sunset viewing options. If there is not a scheduled event, the second story of the Gary Aquatorium, a National historic landmark, is accessible for an elevated view of the horizon and Chicago. If you prefer a leisurely stroll or to sit while enjoying the end of the day, ground your feet in the sand at the beach or enjoy the greenery of the adjacent oak savannah. For a more intimate view (though not of the full sunset), park in the west lot and sit along the lagoon and Japanese bridge. No matter where you choose to close out your day you are guaranteed to be awed by the surrounding natural beauty, landscape, and the promenade in the sky. 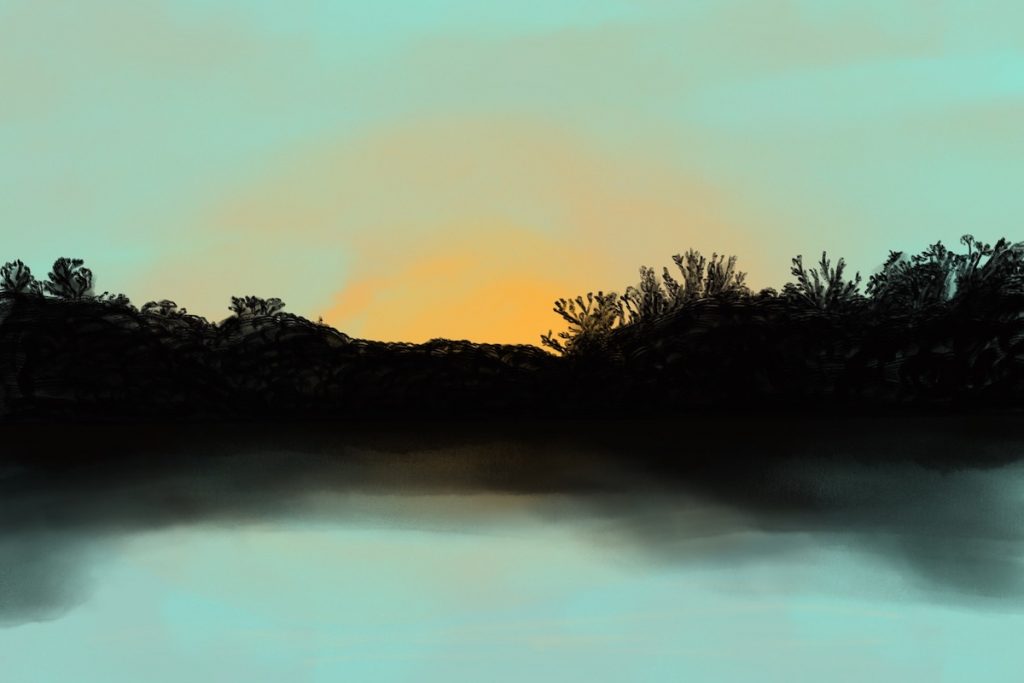 Sunset over the Marquette Park lagoon. Illustration by Arabella Breck.

If you are looking to experience a Broadway-style musical production or maybe an original show written by Gary’s very own producer, director, and writer Mark Spencer, then head on over to The West Side Theatre Guild (900 Gerry Street). For more than twenty-five years this theatre has brought quality live entertainment to Northwest Indiana while also serving as a platform for many young and talented artists to begin their careers.

But that’s not the only option: Indiana University Northwest (3400 Broadway) is the home of Theatre Northwest; the Gary Shakespeare Company has produced many of Shakespeare’s famous works offering community members; and the Glen Theatre (30 W. Ridge Road) has become a home for many of Gary’s talented and up and coming playwrights. So what are you waiting for? Go out and purchase a ticket and enjoy the magic!

You couldn’t miss Jennifer Taylor’s Sparkle House if you tried. Located at 6128 East 6th Place in Miller, the fuschia painted house screams, “Look at me!” Inside it explodes with every level of expressionism–glass, paints, metals, jewelry and more. She calls the house a big old ongoing art project. The house wasn’t colorful when Taylor bought it in 2019. It was abandoned, stripped of everything from radiators to windows. And it called out to her. Like a moth to a flame, Taylor responded to the house and spent every day with a contractor nursing it back to life.

Prior to the pandemic, Sparkle House was a studio with art classes. She has since turned the artsy house into an AirBNB. The two bedroom house has had back-to-back bookings throughout the pandemic. There’s no TV, just two bedrooms, a kitchen, bathroom, and a work area loaded with art supplies. The backyard is a work in progress with a small pond, sitting areas, and a future sculpture garden.