A Rust Belt Education: Part One

It has been more than four decades since money problems forced Jerry Schlueter to cut short his broadcast degree at Ohio University. Yet, the brawny 59-year-old, whose sonorous voice and goatee call to mind Breaking Bad’s Walter White, still reflects on what might have been. Erika Harrison isn’t much about regrets, although financial realities have also impinged on her college plans, leaving her to attend classes only sporadically for more than two decades. Only now, after raising her own daughter, then foster-parenting two children her mother adopted late in life, is she glimpsing a shaft of light at the end of the academic tunnel.

While Schlueter and Harrison knew each other casually from a course in group communication at Cleveland State University in 2013, their backgrounds are different. Schlueter’s is rural and hard-labor masculine, Harrison’s urban and feminine-maternal. His voice is deep, with a tinge of self-effacement, and he is reticent emotionally. She speaks in an energetic rat-tat-tat, her words suffused with emotion and peppered with colloquialisms. He’s white and near 60; she is African American and just turned 36. Yet their stories both speak to the struggles of countless working class men and women who struggle to cobble together a university education during a time when inequality between rich and poor is on the rise, and the middle class – the bulwark of the American educational system and the American economy – is shrinking significantly.

The stories of Schlueter and Harrison are in many ways quintessential Rust Belt narratives — the accounts of two adults whose dreams have collided more than once with the hard-facts of life in the region. Yet they rebound time and again, demonstrating a hope and unbending determination that embodies the best of the American spirit.

Schlueter grew up in Perry, Ohio in a farmhouse on Hale Road, a maple tree-lined byway that intersects streets like Birch and Fruitland, offering a bucolic prospect of sky, farms, a lazy red hawk or two circling above a rooftop, and a rural solemnity suggestive of a Grant Wood picture postcard. He grew up in this house in the 1950s and ‘60s and made the break from the farm to the Big U, enrolling at Ohio University in the fall of 1974.

Leafing through the course catalog upon his arrival, he knew he wanted to major in broadcasting. The college radio station was a blast, he was a good writer, and there seemed opportunities aplenty. Schlueter did well in his classes too, earning Dean’s List and President’s List recognition. With broadcasting expanding at the cusp of the cable television era, he began thinking about a career in the media.

But his family “ran out of dough,” as he put it, with characteristic bluntness. He dropped out, much to his mother’s disappointment, and looked for work. He found a job selling shoes, and every morning six days a week he wore a suit to work at the Kenny’s Shoe Store in Mentor (and later in Athens, Lima, and Fairview Park), working 12 hour days, waiting on customers until he grabbed lunch at the Roy Rodgers restaurant in the mall, taking a bite from a roast beef sandwich and leaving the rest on the shelf in order to kneel down and slip loafers, dress shoes, and boots, like those he clomped around in at the Hale Road house, on customers young and old, some gracious, others cranky.

Every day he would think about it – ponder how he might be able to slip back into broadcasting classes at Ohio University, cobble together enough money to pay the tuition, get back to Athens, and pursue the dream. But the numbers, they didn’t add up. “You need $2,064 for a year of school, and at 86 bucks a week, living in an apartment, how you going to get that?” he said.

But this was life, he thought; you don’t always get what you want, but you push on because you’re young and there’s time and something will turn up. And sure enough, something did, in the form of a quintessential Rust Belt product: steel. 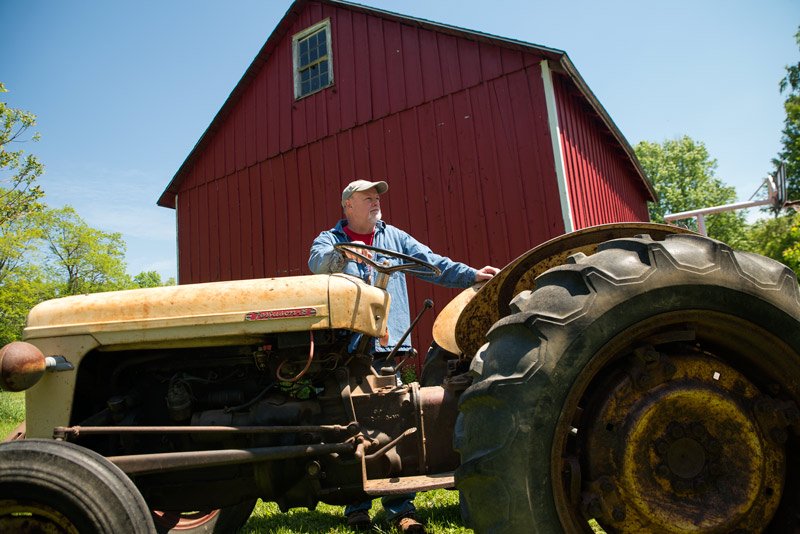 Cleveland Pneumatic, the storied hometown tool company that built landing gear for commercial and military planes, hired him in 1979. Landing gear parts are made of high-strength steel, and for the landing gear to function properly, the steel must be cut to exact proportions. It is a precision job.

The big gear has to fit into the plane perfectly, and for that to happen, its steel components must fit to a “T”. You cannot cut corners. You cannot have as much as a scratch on the metal or the part could fail. You stand at a table on a hard floor for hours, being sprayed by stinky mist from the machines. The place gets hot and the noise – piercing, ear-splitting – never stops. But you have to keep your concentration on the part you are grinding, and it is terrifying when you first start because the wheel could explode if you make a mistake. You bring the grinding wheel that travels across the surface at 700 rpm to the steel part, maneuvering, then grinding the steel so that it is within 3/1000 of an inch of estimated proportions, until it is just where you want it – right and perfect and true.

Schlueter was good at his job, partly, he said, because he was trained by a pro: a World War II pilot who knew that era’s equipment well. He started to feel like there was a pattern to his life; it clicked. And then one day he went to work (and here’s how he tells the story): “This fellow came up to me and says, ‘Did you hear?’ I go ‘What?’ ‘Well,’ he said, ‘I’m sorry to tell you this, but you are laid off.’” His number came up. Men who had more seniority than him had union protection. They kept their jobs.

The ‘80s recession was in full swing. After working for 11 months, he was laid off for four years. The job search – picking up the newspaper and not finding jobs in the classifieds, filling out applications to receive unemployment insurance, applying for work, but finding none; the phone that never rang, letters that never came, the drip-drip of daily tribulations, they weighed on him, brought him down.

He kept going, and kept socializing with friends in Cleveland Heights. On a raucous St. Patrick’s Day in 1980, he met a woman at a friend’s apartment, and he thought the first time he gazed at her, “Wow, you’re something.” They drove to a nearby pub and Jerry, standing in the bar, drink in hand, thoughts elsewhere, feelings submerged, stopped cold when she came up to him and disarmingly asked, “Are you happy?”

His heart melted at her mention of the thing – happiness – which he dared not think about, but which was never far from his mind. “And that was it,” he recalled. He decided, “I’m going to spend the rest of my life torturing you,” he said, laughing just a little, and they dated, became a couple, and when marriage and children came up, he insisted on one thing: They would have children, yes, but the kids would have to get a college education, something he had not attained.

But the dream of education always flickered in the back of his mind. Living in the old Hale Road farmhouse to offer solace to his mom after his father’s death in ’83, he commuted to nearby Lakeland Community College, taking accounting and business law courses and getting all “A”s. Finding his academic groove, he enrolled at Cleveland State and took a smattering of courses in math, political science, and art appreciation.

He wanted to continue, to plug the hole in his game, as he put it. But life kept shoving his plans aside. Something had to give, and education took the dive once more. 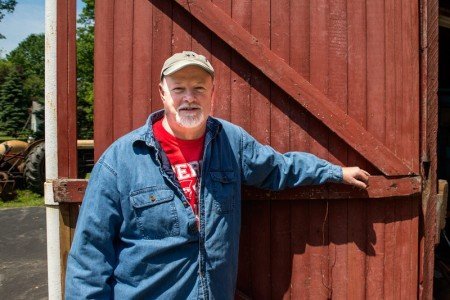 In October, 1984, a letter from Cleveland Pneumatic arrived in the mail. It bore the trademark green stamp of a certified letter, and Schlueter knew immediately what that meant: He had been rehired.

The daily drive ensued, from Hale Road to Route 2 to the Shoreway, around Dead Man’s Curve to I-77, and to Cleveland Pneumatic at Broadway and Fleet. He hadn’t lost his touch with precision grinding, but over the course of the decade and the next – marked by more layoffs – things at the landing gear company began to change. Globalization took hold. Competition from abroad reduced Cleveland Pneumatic’s hold on the market. Relations between management and labor deteriorated.

The workplace became a battlefield. ”There was a lot of confrontation, constant conflict” between management and labor, he recalled, with managers “screaming and yelling. Some guy would stand up and Socratically annihilate (workers), threaten people’s jobs. There’s this huge disconnect between MBAs and the floor. They use models for Japanese car manufacturing in a way that just doesn’t apply.”

What about school? He had this hankering to keep going and complete the degree. His academic path had been fitful: start-stop, start, and he had to stop again when the demands of nightly bottle-feeding an infant daughter made it impossible to give school the perfectionist concentration he demanded of himself. But as the kids got older – he and his wife shared childcare responsibilities – success seemed within reach.

He had been amassing credits at Cleveland State over the years, and when the landing gear plant (purchased by B.F. Goodrich) closed around 2012, and he recovered from a knee operation, he went full steam ahead in 2013-2014, taking some 44 credits in communication over the course of a year. By now Schlueter was much older than most CSU students. At first “they were giving me more due than they probably should have,” he said, but over time he and the students adjusted to each other’s different styles. 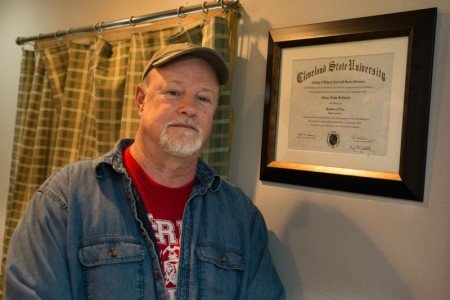 Sitting in Café Ah-Roma on the university campus, he reflected. He had always downplayed his work at the landing gear company, but had recently come to a realization. When you finish your part of the job, he said, recalling his work, “you stamp your ID number on the production document,” and that signifies your contribution. “The responsibility at the end of the day solely lies with you, like a doctor. Someone is on your operating table, this is your responsibility. You’ve got to do the job right. All these parts go into the landing gear. This thing, when you’re done with the grinding wheel, it’s beautiful.”

And there was this: When people get on a plane, they “say a little prayer, many people, just before their plane takes off or lands. And it’s always answered. But for that to happen everything must be done conscientiously.” It was something, he said proudly – grinding the steel, building the landing gear, it was something he accomplished. 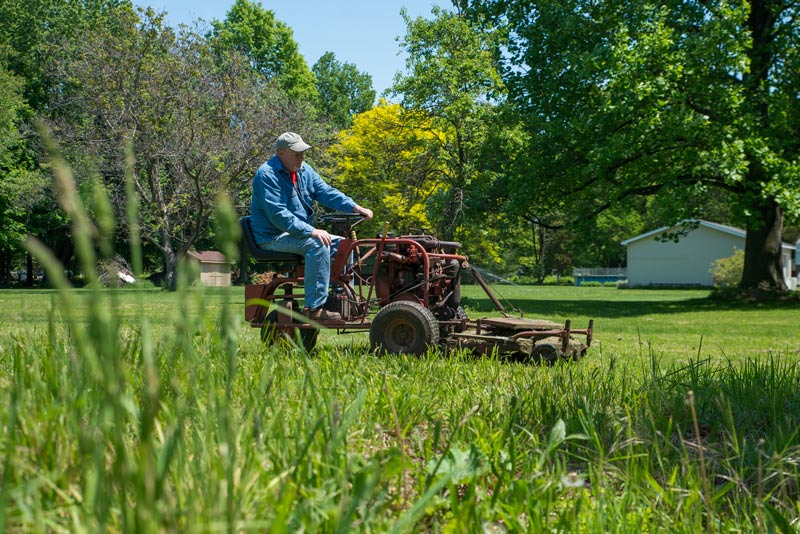 Still, one Saturday in the farmhouse where he grew up where he later raised three children and graduated at long last from college, he found himself a little out of sorts – happy, but searching for something more.

He has been looking for civil service jobs, done well on the tests, but no jobs have come his way. He feels restless, still rides the tractor to cut the grass, fixes leaks in the house when they come, but has a hankering. “Today, I want this thing where I create something with a purpose on a more individual level. I feel like I’ve missed something, where I haven’t done something that needs to be done. Something with a purpose that’s not necessarily associated to a labor thing.” What it is he’s not sure. He is looking to find it.

Read Part II of this feature.

Rick Perloff is a professor of communication and psychology at Cleveland State University. He writes feature stories for newspapers and magazines.