The Fight Against Chicago’s Largest Warehouse Isn’t Over

On Chicago’s southwest side, activists say a massive new distribution center needs to benefit the community


By Peter Winslow, South Side Weekly


Target Corp. and Hilco Redevelopment Partners hosted a private ribbon-cutting ceremony on July 27 to mark the opening of Exchange 55, the controversial 1.3 million-square-foot distribution center in La Villita, prompting roughly thirty residents and environmental activists to protest and voice their concerns about the development in the Southwest Side neighborhood.

In collaboration with the other groups present at the protest, LVEJO demanded that Hilco and Target commit to supplying at least fifty percent of the distribution center jobs to residents of ZIP Codes 60623 and 60632, which include La Villita, Brighton Park, and Archer Heights, among others.

“We are a home of environmental racism in the city,” said Kim Wasserman, executive director of LVEJO. “We will no longer stand by and be sacrificed by the city or by our elected officials. And so, we stand here on behalf of our community in solidarity, we stand here to voice our demands for clean air and clean land.” 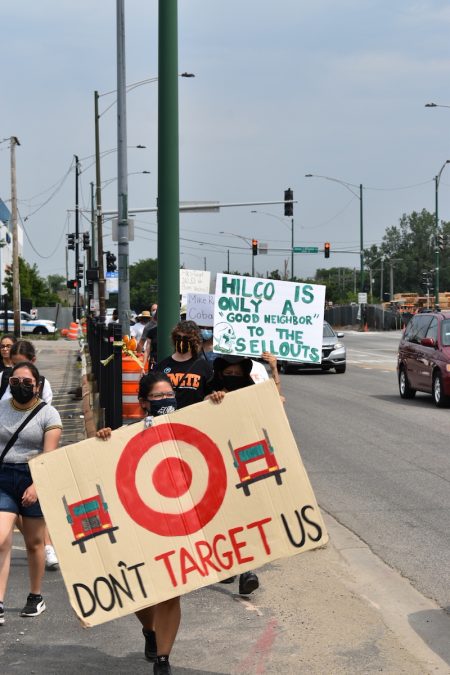 Protestors called the privately-held inauguration hypocritical, since Hilco received public dollars through a $19.7 million tax break from the city in 2019. The resolution was originally sponsored by former Ald. Ricardo Muñoz (22nd ward).

“If they are really trying to be part of the Little Village community, all residents, anyone who is interested to learn about Exchange 55, should have been invited to this ribbon cutting ceremony,” said Edith Tovar, an organizer with LVEJO. Hilco purchased the seventy-acre site in 2017, after the Crawford Generating Station was decommissioned in 2012. “Construction activity at the site is ongoing and the new building structure is approximately 99% complete,” read the most recent status update listed on the Exchange 55 website.

All demolition activity at the site is also “substantially complete,” according to a July 22 project status update. Last April, the developers mismanaged the demolition of a 378-foot smokestack of the old Crawford plant, which sent plumes of dust into adjacent communities during the early months of the COVID-19 pandemic.

Attorney General Kwame Raoul announced a $370,000 settlement between the city and Hilco and its contractors in November of 2020. The city also imposed $68,000 in fines against the developer.

The La Villita facility will stock nearly ninety Target stores, according to the corporation. The Minneapolis-based big box retailer executed a lease agreement in 2019 with the developers worth $100 million, according to a report by Crain’s Chicago Business.

“We’re excited to open our new supply chain facility in Chicago, bringing 2,000 jobs with market-competitive wages and benefits to the Little Village neighborhood,” Target said in a statement provided via email.

Ald. Michael Rodriguez (22nd), who was present at the private ceremony, said there were roughly one hundred people in attendance, including a number of faith and community leaders from the neighborhood, Target representatives, members from the Illinois governor’s office, representatives of the Illinois Hispanic Chamber of Commerce, and others.

Environmental racism has been a perennial charge of local activists in this industrial sector of the city. When asked how he would characterize local support for the logistics center opening, Rodriguez said that the COVID-19 pandemic had a significant impact on the residents, who suffered job and wealth loss. “Target has actually been very communicative with us; over the last several weeks and months they’ve been meeting with us, meeting with community organizations, and I’ve also been present at times for those conversations,” said Rodriguez.

“That’s led to some upcoming job fairs that will be targeted here in the community and we are very hopeful that a great amount of the jobs there will go to local folks in the immediate area.”

The first job fair occurred August 5 at the Central States SER office located at 3946 West 26th Street. The workforce development organization has as its mission the promotion of economic independence and “upward mobility for low-income community residents through education and employment,” according to its website. The second employment fair took place August 7 at the immigration non-profit Instituto del Progreso Latino at 2520 South Western Avenue.

The job fairs were promoted through social media posts and through thousands of flyers that were disseminated to residences and local businesses near the distribution center, according to Rodriguez. Applications for warehouse positions are currently listed on Target’s job board.

“Virtually everybody that was assisting the applicants were bilingual,” said Javir Garibay, executive director of Central States SER. “We had a lot of people that were monolingual Spanish. They are eligible to apply, you know, we’ve got jobs for them, Target has jobs for them, so that’s not a limitation.”

However, community advocates are skeptical of the promises made by the corporation.  Members of LVEJO attended the August 5 job fair to provide applicants with resources about workers’ rights in warehouses. 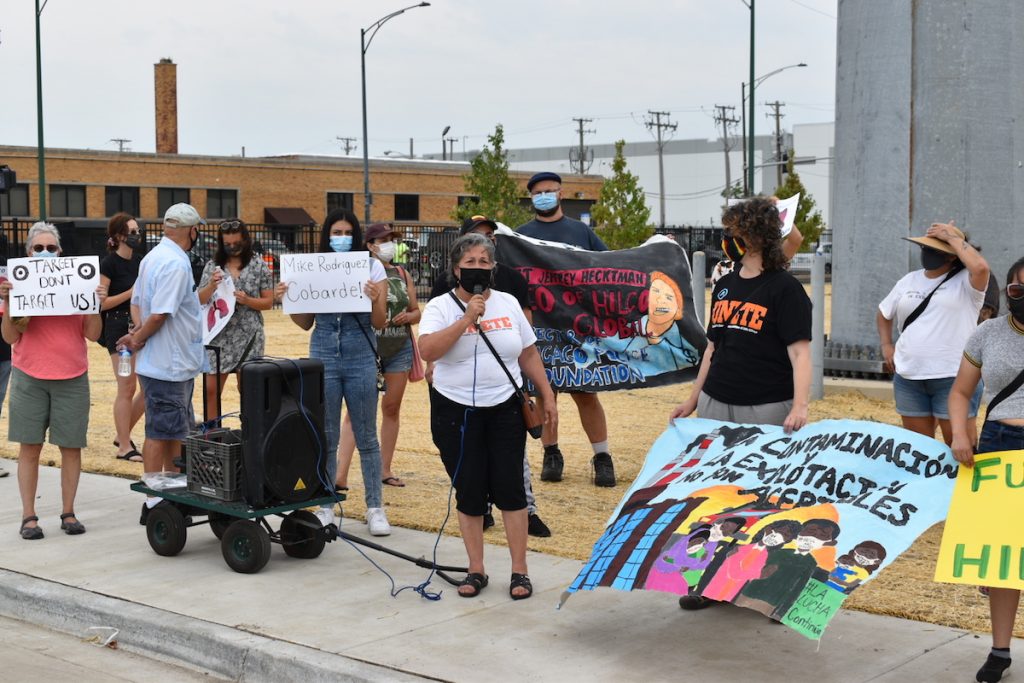 Full-time warehouse workers at the distribution center will be eligible to receive a starting wage of $18.00 per hour, while overnight shifts start at $19.50, according to Target’s employment application portal. Employees are eligible for 401(k) options after completing a thousand hours of work. Undocumented immigrants are not eligible for employment, as applicants must provide proof of legal eligibility to work.

Irma Morales, president and co-founder of Únete La Villita, said that Únete and other community organizations will continue to assemble protests in opposition of the Target distribution facility.

LVEJO and other community organizations plan to tally the number of diesel trucks at high-volume intersections near the distribution center with the hope of “trying to figure out ways to also work with those truck drivers” to prevent them from traveling through residential streets, said Tovar.

“The facility was designed for sustainability and safety—which will be the largest LEED-certified building in the state,” Target said. “The development included major improvements to the surrounding area, including native landscaping, modified intersections and redesigned street routes to limit traffic in the neighborhood.”

Other activist demands include that solar panels be installed atop the distribution center to power residential homes in the area, air filters to be distributed to residences near the warehouse, and that Target commit to electrifying their truck fleet within the first year of operation in La Villita.

Target and Hilco are here to stay for now. But, a question still hangs in the balance: Will all of the jobs Target promised to offer to the community be provided to local residents? “There’s no guarantee that’s going to happen,” Garibay said.

“We are also here to remind Little Village residents and folks… that this campaign is not over, that just because they are doing their ribbon-cutting ceremony doesn’t mean our campaign ends here,” said Tovar. “We are here telling Target to end their lease with Hilco Redevelopment Partners.”

Wasserman also has a clear message for future employees in the distribution center: “If you want to unionize, let us know. We will support you. We will bring resources to support you.” ■

This story was originally published by our partners at Chicago’s South Side Weekly.