André Costello — On the Bill

Just shy of an hour’s drive from his hometown in Elwood City, Pa., André Costello sat down with Rustbelt Almanac at the newly reopened Klavon’s Ice Cream Parlor in Pittsburgh’s Strip District for some dessert.

In recent years, André—the unshaven, giggly front man for Costello and The Cool Minors—has become a sought-after artist in the Pittsburgh music circuit, playing alongside bands like Atlas Sound and Way Yes, but also compiling an impressive catalog of his own. The title track from his band’s first LP, Tumbleweed, has clocked air time on Pittsburgh radio, and successful short tours in Ohio, New York and Pennsylvania have prompted the band’s joining Wild Kindness Records to begin work on another full length album. But these achievements have long been anticipated by André, who’s dreamt about this since the third grade.

[blocktext align=”left”]He recalled drug-free “trips” with his mother while driving through dense snowstorms, radio turned up, snowflakes glowing in their headlights.[/blocktext]“I conveniently hurt my knee one year and couldn’t play football, so I started playing the guitar a lot,” he said between bites of his ice cream sandwich, adding that the laughable over-intensity of his third grade football coaches prodded him into early retirement.

“During one practice after I came back from my injury, I asked one of my coaches what time it was, and he just kept screaming, ‘It’s time to play football!’ I just wanted to know what time it was. That’s when I was like, ‘Fuck this.’”

Once his parents bought him an acoustic guitar he was smitten. With Neil Young as his principle influencer, he developed an infatuation with pure acoustic sound and folksy melodies, but he was still noncommittal about the title “rock star.” 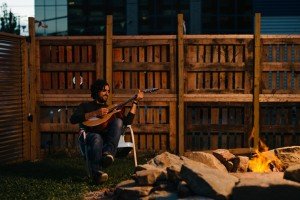 “I didn’t want to say I wanted to be a rock star growing up because that sounds so lame, and you can’t go to school for that,” André said, noting his distaste for the title “artist,” too, because of what he feels are its implied pretensions and diminishing sincerity thanks to carefully orchestrated gimmicks that are all too common in today’s popular music.

Instead, through childhood he told inquirers that he wanted to be a Jurassic Park-inspired paleontologist. After graduating high-school, his passion for drawing meshed with the spirit of practicality, and he headed to Penn State Beaver to study graphic design. But after a short time he decided to transfer.

“I got conned into going to the Art Institute [of Pittsburgh],” he admitted, “I look at ads for those [music/art institutions] now and they remind me of ones for Newport cigarettes—a cool looking, ethnically diverse band, and you can tell they don’t even play guitar ‘cause they’re holding it weird.”

After his first application interview at the Art Institute, he wondered if their sole interest was his money, but with both parents as government employees (his father retired from the military and mother was a postal worker) he received enough aid to pursue a degree there. André added that his parents’ support wasn’t only financial, but indirectly fueled his love for art. He recalled drug-free “trips” with his mother while driving through dense snowstorms, radio turned up, snowflakes glowing in their headlights. And in the mornings, the family alarm was his dad blaring classic rock on the radio.

“It would be like, early Genesis, with Peter Gabriel. I’ve had trips—no drugs, though [laughs]—with both of my parents like that. It messed with my head and shaped it.”

Despite acknowledging that his dad’s rock-wake ups attracted him to influences like Led Zeppelin and Pink Floyd, he expressed frustration with commercial radio’s monotony. Growing up with such limited selections, he felt deprived of essential artists who aren’t commercial names. A problem, he pointed out, that continues today.

“It was great for an intro to music, and burn-runs with my friends, but I didn’t know of Wilco until I went to college. There are no outlets for it.” 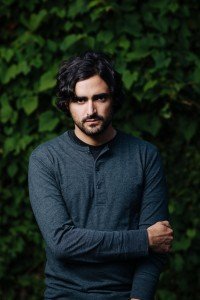 Now, as a musician living in Pittsburgh’s Brookline neighborhood and mentoring music and graphic design workshops for the Carnegie Library of Pittsburgh’s Teen Digital Media Lab during the week, André addresses new problems. Among these are local promotion companies, meant to simplify a musician’s life, that he feels show little concern for the artists they promote: staging shows at inappropriate venues, throwing acts together, charging bands to perform without listing them on the bill, and justifying it all under the guise of “exposure.”

“‘Exposure’ is just a bullshit excuse to make a few more dollars,” he said. Of companies scheduling acts without listing them, he added, “It’s like a candy machine on the way out of Kennywood, it’s there to empty what’s left in your pockets.”

His other problem is with public transportation. Pittsburgh’s troubled transit system stops running before most music venues close, making city travel for André (and his fans) a nightmare.

[blocktext align=”left”]He described the growing music scene and changing atmosphere as a “tightly-knit culture of collaboration”: like-minded people who are increasing opportunities for anyone with the drive to make connections. [/blocktext]“It’s like an epidemic that people are unhappy with where they live,” he said “Own your place! If people did that instead of saying, ‘There’s something better elsewhere,’ you could really make shit happen.”

And in Pittsburgh, André feels shit is happening. He described the growing music scene and changing atmosphere as a “tightly-knit culture of collaboration”: like-minded people who are increasing opportunities for anyone with the drive to make connections. André has definitely benefitted from this setting, beginning in a band called The Slant, and since its break-up, using the city’s various open-mic nights (his favorite at Cannon Coffee in Brookline) to cultivate relationships and test new music.

When we finished our dessert we moved the discussion down Penn Avenue to Bayardstown Social Club and listened—Straub beer and hot dogs in hand around a growing fire—to André’s echoing falsetto on acoustic versions of The Beatles’ “Don’t Pass Me By” and one of his own, “The Fade Out.” Like the rest of his first album, his lyrics explore dark themes and humor inspired by awkwardness and “ugly” concepts. 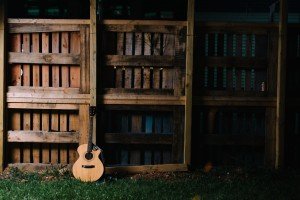 “Awkward interactions just stick with me. I can write happy songs, but I’m really good at writing sad ones. Guess that’s just where I have the most practice [laughs].”

He assured us that he’s a very happy guy and elaborated on his excitement for things to come, like the release of the “Incline Sessions” — a soon to be released video series in which he’s interviewed and plays a song while riding one of Pittsburgh’s famous inclines. But what’s more telling is his eagerness to explore new processes with The Cool Minors and Wild Kindness Records while making his next full-length album. He confessed that this is his first “real” band, with conventional instrumentation, making a live tour especially wild.

Slow pacing is the production plan, though, recording conveniently for the group, “whenever and wherever,” to ultimately produce a vinyl record fit to precede extensive touring.

“Vinyl is the ideal, right?” he reasoned, “I’ve been on the radio. Vinyl and TV are the next two ambitions that let you know you ‘made it.’”

With both the upcoming album as well as with an ambitious music video that will span the entirety of 2012’s Summer’s Best EP, André is determined to take his music onto the national level — an approach of persistence and tenacity that he sees as the only way for he and other Pittsburgh musicians to gain national respect.

“They’re not gonna come to us,” he concluded, “so we’re gonna have to do it ourselves.”