Arabic And English In Dearborn: Language Is More Than Just A Skill

By Bian Elkhatib
With additional reporting by Nikita Mandhani

(Reporters Nikita Mandhani and Bian Elkhatib traveled to the Detroit metropolitan area on a reporting trip sponsored by the Social Justice News Nexus project at Northwestern University’s Medill School of Journalism. Each Friday this month Belt presents their stories exploring life and challenges for Middle Eastern immigrants and refugees and other diverse residents of Dearborn, Detroit and Hamtramck. The three previously published works can be found here, here and here. The fourth installment follows.)

As she sat in a dim conference room wearing a black coat, rays of sunlight lit up Suzan Harb’s face as she spoke of the differences between her native Lebanon and her new home of Dearborn.

“In Lebanon, there’s lots of people around, and when there’s gatherings people can just come and go when they visit,” Harb said in Arabic. “Here, everyone is busy, you have to talk on the phone to set up a time to meet. There’s a lot of things that are very different for you.”

[blocktext align=”right”]“The signs on the streets are in Arabic, and I’m able to read them, and I know a little bit of French. I don’t have a problem; I go places.”[/blocktext]Harb, 45, arrived in the U.S. from Lebanon about one year ago, and she speaks Arabic and French, but no English.

She’s learning English from her two children who attend college, and she sometimes watches television in English. Not speaking the language isn’t a big issue for Harb, however, because she lives in Dearborn, where 30 percent of the population speaks Arabic, according to the U.S. Census.

“The signs on the streets are in Arabic, and I’m able to read them, and I know a little bit of French,” Harb said. “I don’t have a problem; I go places.”

Arabic speakers in Dearborn might be able to navigate the city, but they still have limited job prospects, similar to non-English speakers around the U.S.

According to the Brookings Institution, working-age adults with limited English skills earn 25 to 40 percent less than their peers.

Riyadh Al-Mesaibeli, 40, said he struggled to find well-paying jobs when he had limited English skills. He immigrated to the U.S. in 1995 after receiving a high school diploma from his native country of Yemen. Four years ago, he decided to go back to college and he is now majoring in Near Eastern studies at Wayne State University.

“I had to work so many jobs that don’t require good English,” he said. 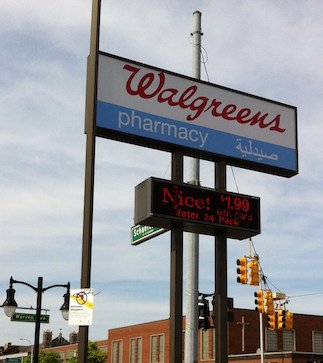 Harb’s husband, Bilal Salloukh, 44, also learned English for work. He said it can be difficult to learn English in Dearborn since so many people speak Arabic.

Rawha Abouarabi – Salloukh’s sister – said learning English is important, because some Arabs in Dearborn won’t speak Arabic even if they know the language. Abouarabi learned English in Lebanon because she attended a school that taught it, but most schools in Lebanon teach French.

Abourabi works for ACCESS – a social service agency in Michigan that primarily helps immigrants from the Middle East. The agency holds ESL classes in one of their Dearborn locations.

“I think most of the time people learn English for better opportunities, better jobs,” Abouarabi said.

Salloukh noted that finding work can be easier for new immigrants in Dearborn than other places. However, in the long run, it can be more difficult to learn English while on the job.

“Because there are a lot of Arabs, it helps with language and it doesn’t help with language,” he said. “Sometimes you have to speak English and your English language skills get stronger, it’s better. Sometimes you’re in a store, and you’re working, and there’s Arabs and they’re going to speak Arabic. And this can set you back; it won’t help you learn the language very much.”

Banner photo: Businesses in Dearborn display signs in both Arabic and English, making it easier for Arabic speakers to navigate the city. [Photo by Nikita Mandhani]