The Art of Amy Casey

Every architect worth her salt knows her Invisible Cities. Architects use Calvino’s confounding little book the way most of the world uses sacred texts: to justify whatever it is they most want to do.

It was Calvino I thought of when I first saw Amy Casey’s paintings. 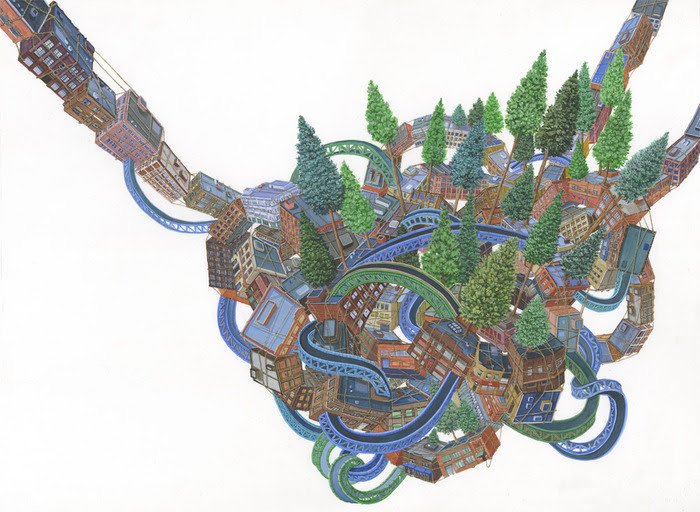 Now I shall tell of the city of Zenobia, which is wonderful in this fashion: though set on dry terrain it stands on high pilings and the houses are of bamboo and zinc, with many platforms and on stilts at various heights, crossing one another, linked by ladders and hanging sidewalks, surmounted by cone-roofed belvederes, barrels storing water, weather vanes, jutting pulleys, and fish poles, and cranes. 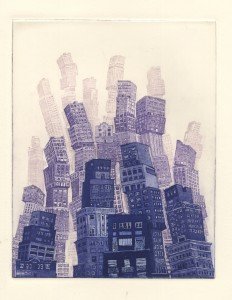 That’s Marco Polo, the principal narrator of Calvino’s book, which is a catalogue of his visits to various cities, tales that puzzle and irritate his interlocutor, Kublai Khan. It’s a weird book.

Casey’s cityscapes are weird too. Which is not to say her paintings, which are lovely, but what they depict, which I just referred to as cityscapes but could as well have called organisms, or machines. These aren’t cities anyone but Calvino’s Marco Polo might recognize. Her exhibition with Cathie Bleck, Rarely Home (at Maria Neil Art Project through October 19), features a handful of new work, recognizably of a piece with a body of work Casey has been engaged with for about a decade.

“It’s a linear process, so where exactly this series started is hard to pinpoint,” Casey says. “When I started using more urban images was probably 2004. I was living on the edge of the city, but somehow when I moved closer downtown, it just started coming up in the work a lot. I tend to draw from my environment.” The sharp-eyed viewer will discern in Casey’s work hints of that environment — Cleveland.

“I’ve almost been, in a sense, rebuilding Cleveland over and over again,” Casey says. “That’s not my goal or anything, but that is kind of what I’m doing. Almost all the buildings are real buildings, and most of the are from Cleveland, because I’m living here, and that’s what I see everyday.” This a pretty coy statement, but one shouldn’t push visual artists to offer verbal explanations of their work. Artist’s statements are almost always lies, and Casey’s work is so clearly not about the literal depiction of Cleveland, or any city. Calvino, by the way, wasn’t really talking about urban planning. 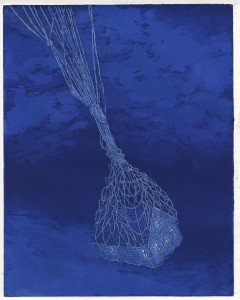 Studying the body of the artist’s work, including a handful of the new pieces to be included in this show, I was irritated with my own tendency to anthropomorphize the buildings depicted therein. As in her etching, Blue: a lone little house, trapped in a net and floating against an inky sky — how can you not take the house’s windows for eyes? I worry about this little house.

Some of my instinct has to do with scale, I think. Children are in thrall to things rendered in miniature — and anything truly massive, for that matter, but their dearest possessions tend to be the former: doll clothes and tiny, plastic hairbrushes; cars and trucks, reproduced to scale. An adult, or this adult, anyway, studying the small, painstakingly rendered buildings, trees, and water towers in Casey’s more crowded paintings is made a child again. I think this must be by design. “I do prefer a nice A-frame house,” Casey says, “houses that look like what a child’s idea of what a house might look like.” 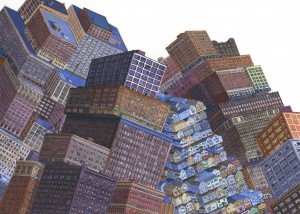 In Snuggle, the artist offers dozens of such houses, stacked wide and high, being embraced (a verb suggested by the title, I confess) by larger buildings, humble warehouses, grand office blocks, similarly stacked, precariously, at an angle, the whole thing ringed by telephone wires that almost suggest a garland. The painting feels strangely hopeful. All this human endeavor, and nary a human to be seen.

The paintings could seem surreal (bridges, twisted and torqued, holding together a knot of buildings and evergreen trees); they could seem post-apocalyptic (waterfalls and conifers arrayed over a cityscape instead of the face of a cliff.) They could seem twee, an easy adjective to deploy with respect to painting that feels even remotely representational. These could feel like narratives of environmental disaster, or economic collapse. You see what you want to see.

Casey argues her use of architecture as material is a response to her environment.  “I think, probably, if I was in the mountains, I would be painting rocks,” she says. Maybe.

Paintings of rocks could probably be moving — Vija Celmins conjures emotion out of waves and spider webs — but there’s something about a building. Whether we’re looking at flawless mansions in the styles section or yet another slideshow of a building gone feral, a tree rooted in the floor, it’s the same impulse.  To get back to Calvino, for all his talk of patterns and plazas, of canals and columns and Corinthian capitals, he also evokes cities in terms of less interest to the architect — “one fat woman fanning herself on a train’s platform.” When I look at a building, any building, but certainly the imagined versions of real buildings that inhabit Amy Casey’s paintings, it’s that woman I can’t help think of.