The national media, no doubt conditioned by the exorbitant cost of living on the two coasts, loves tales of houses in flyover country selling for the price of a crappy used car and the plucky urban homesteaders who buy them. So does the public. A recent BuzzFeed story by Drew Philip about his Herculean efforts to restore a $500 house in Detroit attracted more than 1.4 million views. “The city is filled with these structures, houses whose yellowy eyes seem to follow you,” Philip wrote. “It would be only one house out of thousands, but I wanted to prove it could be done, prove that this American vision of torment could be built back into a home.” 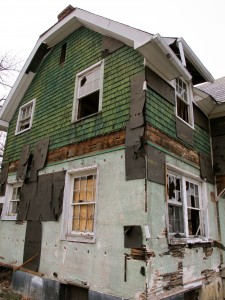 Photo courtesy of the author.

Commendable? You bet. Inspiring? Absolutely. But Philip’s reclamation project should also serve as a warning for anyone who has ever fantasized about snapping up a house on eBay for three figures in a Rust Belt city like Cleveland, Youngstown, or Saginaw. It’s easy to envision yourself in a pair of Carhartts and a flannel shirt sanding hardwood floors, modernizing the kitchen, and planting apple trees in the front yard. But as Philip illustrates, you should also be prepared for the less savory tasks, like spending frigid winters without heat, removing every imaginable form of debris (including “literal piles of human shit”), buying a shotgun, and being prepared to use it.

If you’re not financially stable, committed to years of hard work, and willing to deal with the frustrations that come with life in a city that used to build things, your psyche and your bank account will take a big hit. And you might end up hurting the very place you were trying to help when you call it quits and walk away.

I found this out for myself when I returned to my hometown of Flint, Michigan, to buy a house in the summer of 2009 after living in San Francisco for more than a decade. The chance to rediscover a simpler life and help spur the revival of America’s industrial heartland pulled me like a magnet back to the Vehicle City. I longed to escape a toxic mortgage and do my part to help the town where four generations of my family lived, and I enjoyed a happy childhood in the seventies and eighties, despite Flint’s socio-economic swan dive. But my three-year quest, fueled by good intentions, nostalgia, and delusional thinking, didn’t go quite as planned.

[blocktext align=”left”]It’s easy to envision yourself in a pair of Carhartts and a flannel shirt sanding hardwood floors, modernizing the kitchen, and planting apple trees in the front yard. [/blocktext]I quickly discovered that you get what you pay for, even in Flint. The city is infamous for crime and blight. It’s labeled the most dangerous city in America, based on FBI statistics, and approximately one-third is abandoned. Michael Moore’s unexpectedly popular documentary Roger & Me chronicled the devastating impact of General Motors layoffs on the city. But that doesn’t mean there are no vibrant, well-maintained neighborhoods. Areas like Mott Park and Woodcroft Estates have great houses ranging from the quaint to the palatial. A friend in Flint recently bought a Cape Cod in the sylvan College Cultural area. It’s a handsome, 75-year-old wood-shingled specimen with five bedrooms, three full baths, and a paneled library where Sherlock Holmes would feel comfortable. Birch trees dot the backyard. The price? Just $70,000, a steal by big-city standards, but hardly the stuff of pocket-change dreams.

In more humble neighborhoods, homes have inevitably been feasted upon by scrappers in search of any metal they can sell. Strips of aluminum siding have been peeled off, copper plumbing and wiring ripped out, water heaters and fixtures absconded with. Even doorknobs aren’t safe. Materials and labor for home improvement projects are market rate, so the cost of restoring a run-down American Foursquare in a struggling area is comparable to fixing one up in a more prosperous location. If you don’t have serious do-it-yourself skills, you could go broke fast. A few replacement windows could easily top the purchase price of a house. 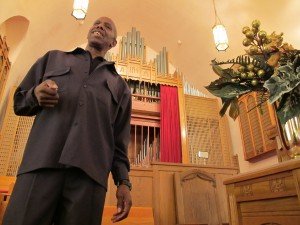 Sherman McCathern, pastor of Joy Tabernacle Church in Civic Park, is on the front line of the rebuilding in his neighborhood. Courtesy of author.

Oh, don’t forget that trying to fix up the house while living somewhere else is a bad idea. An unguarded house in the process of restoration is the dream of enterprising scrappers. Once you start major repairs, you better be camping inside or living nearby. A part-time vanity project this ain’t.

Then there are the hidden costs and drawbacks of owning a fixer-upper in a depopulating city with double-digit unemployment. Taxes and fees are higher to offset declining local revenues. Detroit, for example, has the highest property taxes in the country. And Flint’s emergency manager—granted control of the city by the governor to deal with a burgeoning budget deficit—recently hiked water, sewer, and garbage collection rates, and imposed a new fee to pay for streetlights. Home and auto insurance policies also tend to be more expensive. The same goes for utilities.

The prospect of these low-cost houses appreciating in value anytime soon is hardly a sure thing. These are often older residences with small rooms and a single bath. Local schools are underfunded and underperforming. Municipal and state budget cuts result in reduced city services like police and fire protection. Sure, you could get lucky and land in a neighborhood that stages a turnaround, but if you expect to resell at a profit after lovingly restoring your home, a trip to Vegas may be a better bet. I hear blackjack has the best odds.

[blocktext align=”left”]It took me a few years of fruitless house hunting, back-of-the-envelope financial calculations, and some real soul searching to realize that I had no business purchasing a house in Flint. [/blocktext]Thankfully, cities recognize that the purchase price is just the first step in transforming an abandoned house into a real home. In the Rust Belt and beyond, there are local initiatives offering property for less-than the cost of a gym membership. Gary, Indiana, with its 10,000 abandoned homes, has a lottery to sell houses for $1 to residents who meet certain financial and residency requirements in an effort to reinvigorate a city crushed by deindustrialization. “My target would be to sell 50 houses a year,” Mayor Karen Freeman-Wilson told The New York Times. “We’re getting these people to contribute as taxpayers. They can be part of the group that moves out, or they can be part of the group that invests.”

But the program wisely demands a minimum income of $35,250 for individuals, at least $1,000 in savings, and the demonstrated ability to rehabilitate the house. Gary’s mayor estimates that each home in the lottery needs $20,000 to $50,000 in renovations. In other words, that first dollar is just the start of an extended financial commitment. 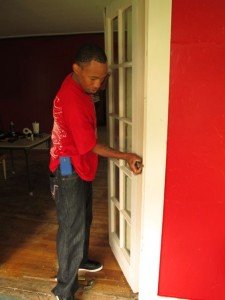 P-nut is a resident of Civic Park who is currently renovating a house. Courtesy of author.

It took me a few years of fruitless house hunting, back-of-the-envelope financial calculations, and some real soul searching to realize that I had no business purchasing a house in Flint. The last thing the city needed was another financially challenged homeowner, even one whose heart was in the right place. This wasn’t some lark. The residents I met in Flint restoring old homes were hardcore. They were in it for the long haul and willing to part with tens of thousands of dollars to stake their claim to this troubled spot on the Michigan map. I also met well-meaning folks who couldn’t hack it. They gave up on their renovation dreams, leaving empty houses behind. This was clearly not the stuff of fantasy.

While it lacks the emotional appeal of stories about the young idealists who venture back to these struggling cities, land banks are a more far-reaching and clear-eyed attempt to help places like Flint. They don’t focus on getting residents into abandoned housing; instead, they concentrate on eliminating empty structures.

Admittedly, the land-bank approach appeals more to the head than the heart. It requires cities to let go of the past and admit they might never regain the growing populations, thriving economies, and broad middle-class prosperity of the post-war boom. Though it’s not an economic plan that will generate new jobs, it is a logical step toward stabilization and it lays the groundwork for the future. It wasn’t very satisfying, but at one point I thought that paying to tear down a land-bank house in Flint would be the best way to give back to my hometown. There was one problem; I couldn’t afford it. Demolition costs $9,000 a pop.

[blocktext align=”left”]Land banks and other initiatives to demolish the structures that no one wants will have a far greater impact. It’s something that people on the front lines like Pastor McCathern understand, even as they fight to save their neighborhoods.[/blocktext]In the end, I was fortunate enough to help Flint in my own small way. I befriended a man named Sherman McCathern, the energetic pastor of Joy Tabernacle Church, located in my old neighborhood of Civic Park. He battles crime, house flippers, and the forces of economic decline while ministering to a flock beset by unemployment and heartache. Not long after I reluctantly gave up my quest for home ownership, he told me that someone had donated a house to the church. The pastor, in turn, had given it to a church member nicknamed P-Nut, a young guy with a family who was trying to rebuild his life after a stint in jail. But the house needed work and there was no way to pay for it. The solution seemed obvious. I donated the money I had saved for a Flint house to help with the renovations.

There’s no silver bullet that will solve the problem of abandoned houses in America’s shrinking cities. Well-meaning Rust Belt expatriates like me can lend a hand. Dedicated urban homesteaders can save some houses with money, carpentry skills, and sheer force of will. Innovative projects like Detroit’s Write A House, which gives a renovated home to writers who move to the Motor City, can play a role in stabilizing neighborhoods. But the staggering number of empty houses means that these laudable efforts are only a small part of the solution. Land banks and other initiatives to demolish the structures that no one wants will have a far greater impact. It’s something that people on the front lines like Pastor McCathern understand, even as they fight to save their neighborhoods.

“I accept that we’re going to have to tear down some of these houses,” he told me on a hot summer day as we stood in the parking lot of his church. “It’s like we have to purge Civic Park before we can bring it back.”

Gordon Young is the creator of Flint Expatriates: A blog for the long-lost residents of the Vehicle City and the author of Teardown: Memoir of a Vanishing City, recently named a Michigan Notable Book for 2014.

Like what we publish on Belt? Become a member and support independent journalism.