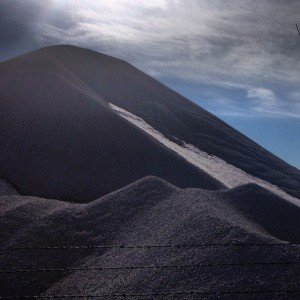 Piles of limestone, piles of gravel, piles of broken glass. Items haphazardly piled as if to signal that no one cares what happens here. Prime views of Terminal Tower, the tallest building in the world outside New York City until 1953, obstructed by barbed wire and industrial waste. Empty parking lots advertising ridiculously low monthly rates. Space is clearly not a limiting factor in the Flats.

Beginning with Moses Cleaveland’s arrival in the 18th century, the area around the banks of the Cuyahoga River benefited from Cleveland’s role as a key shipping site and saw considerable industrial development mixed with periodic collapse and decline. By 1969, the year of the Cuyahoga River’s most infamous pollution-driven fires, the surrounding Flats had fallen into persistent decay and abandonment. This all changed in the 1980s and ‘90s when nightclubs, shops, and music venues turned the area into a lively entertainment district. After a brief period of prosperity, a series of drowning deaths in the summer of 2000 paired with an increase in crime and safety concerns. Most visitors were scared away. Businesses shuttered and the Flats once again went dark. 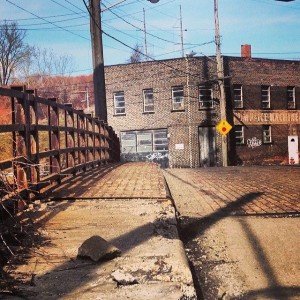 Aside from a few pockets of revitalization, the bulk of the area remains desolate today, despite its strategic location between downtown Cleveland and the in-demand neighborhoods of Tremont and Ohio City. Many Clevelanders I meet don’t seem to give the Flats a second thought or avoid them entirely, but not me. I haven’t lived in Cleveland very long. Unlike many other young people moving to Cleveland, I’m no boomerang. I didn’t grow up here, leave to explore the world, then return. I arrived almost two years ago from Philadelphia, fresh out of graduate school and excited for a challenging new job, optimistic about the Rust Belt revitalization I’d read about in the latest trend piece heralding Cleveland as the new Brooklyn. While I do encounter many signs of this revitalization, the city still doesn’t feel right to me. A mismatch. Except one place: the Flats. 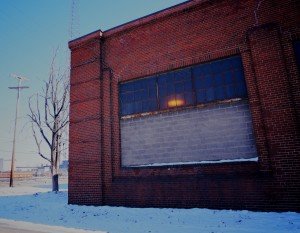 I’m drawn to them, over and over: unhurried walks on the rare clear winter’s day; standing below the brittle skeleton of a discarded bridge, soon to disappear from the world; late-night bike rides past seemingly abandoned buildings with suspicious and solitary lights shining inside. Maybe it’s the risk. Maybe it’s the fear. I came from a city with its share of crime (during the summer, shooting rates would often climb, turning Philadelphia into “Killadelphia”) where late-night walks home came requisite with my car(e)-free lifestyle. In response, I developed an internal safety meter, largely calibrated by the level of isolation on a given block. Fast-forward to Cleveland, where the city is built for twice as many people as currently live here, leaving wide swaths empty and poised to set off my safety alarm at all times of the day. There are only two directions this can lead: concluding that I am indeed unsafe and should avoid going places alone; or, realizing on an intellectual level that my internal meter may be miscalibrated, but left with a sinking sense of dread I cannot shake. 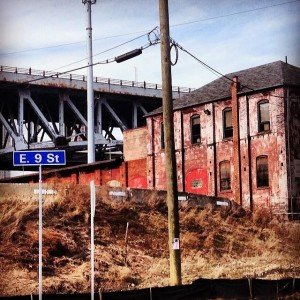 Perhaps the attraction is also an alignment of the solitude I feel in a city that’s not mine with a place that’s truly isolated. Because frankly, much of Cleveland feels this way to me but is less obviously desolate. Standing on empty downtown streets, the desertion leaves me with a feeling that something is off — a dissonance between what I expect and the reality of what is present. I look for evidence of the famed “Millionaire’s Row” on Euclid Avenue and find only overgrown lots where mansions once were, yet the occasional business or passerby allows me to maintain at least the illusion of occupancy. But there is nothing to mask this emptiness in the Flats, thereby reducing the dissonance between the identity of the place and the feeling it inspires.

This past fall, I went to my first Ingenuity Fest — a cultural staple in Cleveland for the last decade, self-described as a festival of art and technology. Walking into the repurposed warehouse space amidst downtown lakefront docks, I was immediately reminded of the annual Fringe Festival in Philadelphia that I had attended religiously before moving to Cleveland. For two weeks every September I would gorge myself on experimental performance art of all kinds, much of it amazing, some cringe-worthy, but all exciting. Although the performances were the focus, the nightly festival bar — housed in a warehouse overflowing with performers, attendees, onlookers (really, anyone worth meeting), cheap drinks, and a dance floor — formed the fabric that glued the geographically and thematically diverse pieces together into a cohesive event. I hold many prized memories of nights at the festival bar, my clothes sticky from the humidity of the still-present summer mixed with the densely-packed dance floor, and filled with the magical sense that anything was possible. These nights were my personal version of the experimental performance art I saw at the festival — equally likely to turn amazing or cringe-worthy, but always exciting. 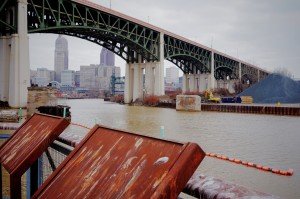 Biking home alone through the Flats that night I was caught in a downpour wearing only a sleeveless dress, clinging to September’s last gasps of summer — but it was not a summer rain. The wet chill could not conceal the coming winter. I didn’t know it at the time, but it would start snowing in mid-October and Cleveland would experience one of its harshest winters on record. Yet that rainy September night, I stopped on the Carter Road Bridge overlooking the lit-up downtown skyscape, a powerful symbol of urbanness seated directly adjacent to the ghost town in which I stood, and felt suddenly at ease. Finally, the dissonance had disappeared, leaving me alone with the Flats: a person and a space, both out of place.

Sandy Griffith moved to Cleveland in 2012 after earning her PhD in biostatistics from the University of Pennsylvania. She currently resides with her two cats on the near West Side and spends her time doing cool things with data and biking wherever possible. You can find her on Twitter at @sgrifter.