Two days ahead of last month’s primary elections in Illinois, Democratic State Senator Daniel Biss, a mathematician running to be a “middle class governor,” posted a video of himself juggling fire on his social media accounts (pictured above). Fighting an uphill battle against billionaire J.B. Pritzker, who was dropping $156,355.64 of his own money into his campaign each day, Biss said in the ad that he didn’t have a personal fortune to blow on TV commercials.

“Look, we all know that juggling fire alone can’t outweigh millions of dollars in TV commercials, but you can,” Biss says to the camera, his monotone delivery and expressionless face making the need for a gimmick obvious.

“Look, we all know that juggling fire alone can’t outweigh millions of dollars in TV commercials, but you can.”

The ad proved popular, ranking among Biss’s most viewed Facebook videos and winning him some national press. He would lose the primary a couple days after posting the video, but the ad strategy he followed lives on throughout the Rust Belt, where underdog candidates trying to break through have tapped into their creativity to make a mark.

Of course, those who live in the Rust Belt will not be surprised by the cinematic genius coming out of the region that produced Francis Ford Coppola (Detroit), Orson Welles (Kenosha), and that great documenter of Midwest culture, the great John Hughes (Lansing). And to those from outside the region, let this be a lesson: not all Rust Belt voters are moved by cliched and empty promises of reviving some foregone industry-based economy. Show us you’re creative, show us you’re smart, and, hell, it wouldn’t hurt you to make us laugh.

Here, six of the most creative Midwest campaign ads of the 2018 political season … so far.

In the world of campaign ads, showing even the slightest sense of humor is enough to stand out. Self-awareness is an ever rarer trait. That’s why Michigan gubernatorial candidate Shri Thanedar’s ad qualifies as one of the most amusing of the year. And it appears to be helping. When Thanedar launched his campaign, he was a virtual unknown. Now he’s risen to the top of at least one poll. The small fortune he’s spent to make sure his face is constantly plastered on every Michigander’s TV has a lot to do with it, but you have to give some credit to Thanedar’s comedic chops. 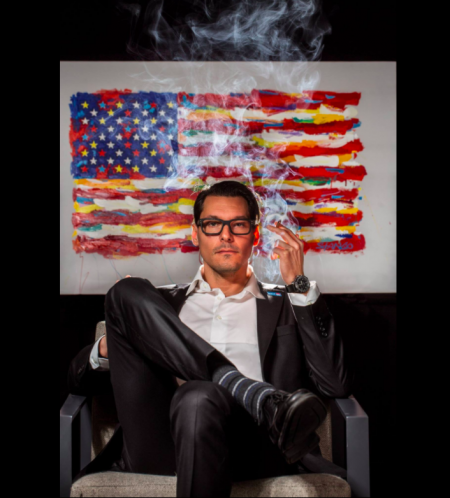 They called him the “cannabis candidate” and the reason is obvious. This former FBI employee with a somewhat checkered past made national news with an ad that featured him blazing up in front of the American flag (pictured right). (And yes, he is pro marijuana legalization.) As Wolf told High Times about the ad: “My campaign consultant said, ‘All you have to do is stand in front of an American flag with a beer; it’ll win the campaign for you. I said, ‘We need to evolve further. I want to stand in front of an American flag smoking a joint.’” He also advertised on porn sites. Unfortunately for Wolf, attention doesn’t always equal votes. He finished well short of  incumbent Democrat Mike Quigley in March’s primary. But he still holds the distinction of creating “2018’s political campaign poster most worthy of a dorm room wall.”

As a whole, this ad is poorly produced and fairly awkward. And then there’s the part where aspiring Michigan Attorney General Dana Nessel suggests the only way to be sure an elected official doesn’t try to show you his penis is to elect a candidate who doesn’t have a penis. She has a point. And whether or not it helped, it certainly didn’t hurt with the Michigan Democratic Party, which last week bestowed Nessel with its endorsement.

Kerry Bentivolio knows what it takes to win a Congressional seat in Michigan. He did it once before in 2012. After two years in office, the Republican was voted out. Now that the man who beat him is retiring, Bentivolio is back and this time he brought his green screen. It’s hard to imagine that this ad will be effective, but give Bentivolio credit for getting weird, which has won him at least one title:  New York Magazine’s “most unhinged political ad of 2018.”

A former state representative with two young daughters, Kelda Roys is one of a handful of Democrats vying for the chance to unseat Gov. Scott Walker in November. But she’s the only one to breastfeed her baby in a campaign ad. Roys told HuffPo that she didn’t intend for her ad to include the tender moment — not sure we’re buying that — but it’s a good thing it did. She received national press from publications spanning from Cosmo.com to The New York Times, which could go a long way toward increasing the zero percent of voters who said they’d cast their ballot for her before the ad.

The former manager for indie rock band Bon Iver has returned home to challenge one of Trump’s most strident supporters in Congress, Sean Duffy, in a district that went for Trump by 21 points. Frenette’s first campaign ad is slow and emotive, much like the music of the band that scores it, his former client. Despite a few cliches — the increasingly prevalent driving-behind-the-wheel shot, the pensive stare out of the window with coffee in hand — Frenette’s ad feels fresher than most. Think about it: When’s the last time you saw an aspiring congressman use scenes of an indie rock show in his commercial?