How To Make Your Own Billboard: A Clevelander’s Homegrown Anti-Trump Sign

“If you walk down any protest line, there’s no discourse. It’s just yelling,” says Eric Helms, plausibly the only Clevelander to put up his own billboard in anticipation of the arrival of the Republican National Convention. “No one is listening to each other. Discourse is dead.”

A billboard may seem an odd way to get people talking, but Helms’ sign, looming above the West Shoreway at 33rd, is a conversation starter. It features a towering wall topped with heaps of razor wire. Six words appear in bold across the image: 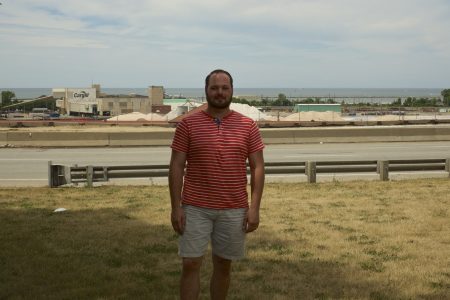 How did Helms, a 35-year-old freelance copywriter who lives in the inner-ring suburb of Cleveland Heights, go about writing his opinion large across the sky?  First, of course, he hopped on Facebook, where he contacted a longtime friend in Florida, graphic designer Nathan Scherer.

“I was like, ‘Hey dude, you want to do something?’ He’s very active politically. I’m not. I’m more like… I try to make fun of stuff.”

It seems deceptively simple: buds get woke, flip a middle finger to the Never Trump PAC, take a very aesthetic potshot at the Donald’s Mexican wall.

Except it’s not quite that easy. Helms and Scherer had to go through the hassle of creating, buying, and installing a political campaign ad without being attached to specific political party or committee, which is no small feat – and their work is more nuanced than other billboards threatening viewers with impending doom. They also started a GoFundMe account to raise the $1,090 needed, though Helms sees the website less about money, having already kissed his investment goodbye, and much more about getting the billboard seen by as wide an audience as possible.

Even though the two the high school friends and collaborators live more than one thousand miles apart, the design process went quickly.  The final product took, by Helms’ estimate, just one full day to assemble. But there were a few fits and starts before they decided on the text.

“There was ‘Hey America, Get Ready to Eat Shit’ and ‘Finally! A Rich Person Who Hates Minorities AND Poor People’ …just stuff like that,” says Helms. “But then I got into stuff like ‘It’s Only Funny Until You’re On The Other Side Of The Wall’ — but it was too long, I’ve gotta get it down to five or six words. One I liked was ‘It Only Works When You Don’t Think Too Hard About It.’ That was my final [reject].” 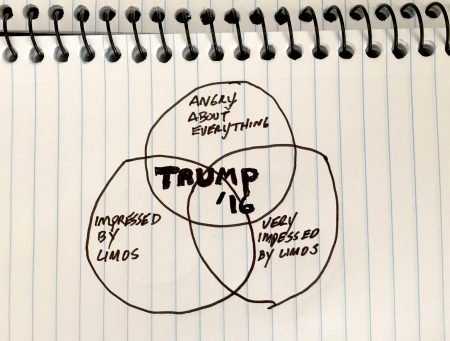 Another brainstorming session involved breaking down Trump’s voting demographics into easy-to-understand Venn diagrams. After describing one, he sketched it out on paper, as a billboard design.

But Helms added, “I don’t want to antagonize people. When you insult people, are they really listening?”

The pair then had to navigate the obscure world of political advertising.

“There’s certain disclosures that have to be on political advertising,” notes Helms.  “You can’t really see it on the billboard, because I fought for it to be taken off. I wanted it to be plain. Mine had to say ‘Paid by me.’ And since I’m not an organization I had to put my personal website up there.”

When asked why he chose to combat Trump’s notoriously fear-mongering campaign with further images of intimidation, Helms says he decided to just accept the reality of fear in America today and point out the coldly divisive nature of walls themselves.

“I think the copy has a couple levels,” he says. “You’re on the good side today, but who knows. What is his means to the end? Trump is his means to his own end. And that’s what I really feel like. Trump isn’t in this for anybody but Trump. So yeah, sure, it obviously plays to the imagery of the wall, immigrants, and others where he’s done such a good job of making nativism seems like patriotism – which it’s not – and finding that common enemy to put them on the other side of the wall. 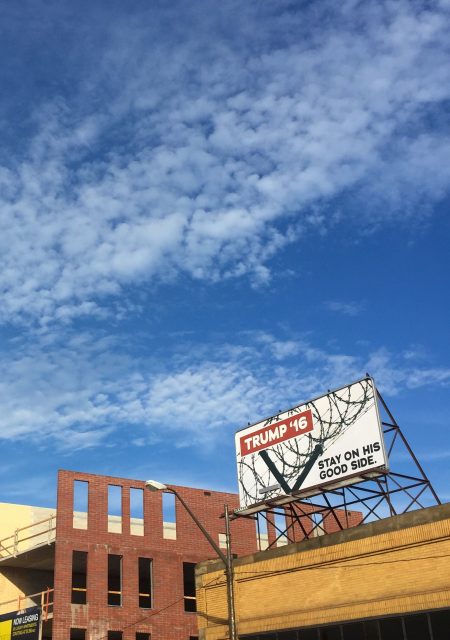 “We need to realize who we’re deeming ‘other’,” he continues. “If we put religious restrictions on Muslims, why won’t it be Christians the next day? Why won’t it be Protestants? Jews? This stuff we’re rallying towards is so slippery. People need to stop and take a breath and think about it.”

For the sake of argument, I wanted to know why they didn’t make it easier on themselves by donating to an anti-Trump organization.

“I feel Never Trump, but I don’t identify with the Never Trump movement, because to me it’s too vague. I just know this can’t be the answer. Sometimes you only know stuff when you see the wrong thing. You know how the Supreme Court defines pornography as, ‘I only know it when I see it?’ That’s Trump to me.”

By the end of our conversation it was clear that the only spot in the Venn diagram where Trump and Helms and Scherer overlap is a penchant for putting their money where their mouth is.