Why Is West Virginia Harming Its Craft Distilleries?

Bloomery Plantation Distillery, a small craft distillery in Charles Town, West Virginia, is, residents will tell you, a state treasure. But it has also recently shuttered its doors due a dispute with the West Virginia Alcohol and Beverage Control Administration (WVABCA). Thanks to an absurd twist in their liquor license – and in a perversion of conventional wisdom – regulations are hurting small, entrepreneurial businesses in West Virginia, and feeding the interests of big business. 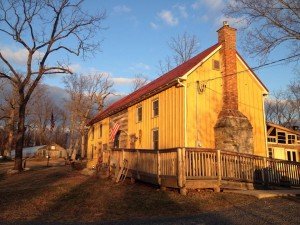 West Virginia has seen distilleries and mini-distilleries crop up throughout the state in recent years. But three-year-old Bloomery is unique. The owners, Tom Kiefer and Linda Losey, operate the distillery as a functional farm, managing their own beehives, lemon trees, and raspberry bushes, which are macerated and used to brew new SweetShines, Bloomery’s take on the state’s classic moonshine. When Kiefer and Losey found the log cabin that the distillery occupies now, it was dilapidated and unusable. They renovated it and decided to keep the structure’s original name to pay homage to the Bloomery ironworks factory that had been there in 1840 producing cheap, small batches of iron for local use. In the late 1800s, the original Bloomery was also a hub for moonshine bootleggers, so the name felt particularly appropriate. In the 21st century, Bloomery sold handmade SweetShine to tens of thousands of tourists a year through their tasting room. “We’ve built our entire model starting with the farm experience and our tasting room,” Losey describes, “It is our epicenter.” 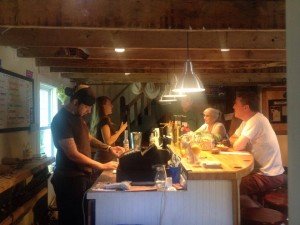 As the tasting room is the epicenter of Bloomery, so is Bloomery the epicenter of a West Virginia symbolism. “[Bloomery] is representative of what it’s like to be from West Virginia,” former resident Andrew Del-Colle says. “People identify with it. The owners took a forgotten, rundown building and turned it into something great, something that the community could take pride in and get behind. For people that belong to a state that often gets treated the same way, it’s symbolic.”

The tasting room is both Bloomery’s showpiece and its downfall. As per WVABCA regulations, retail liquor establishments have to abide by a bailment process in order to sell alcohol legally and at an agreed upon price (to avoid competition). Because Bloomery and distilleries across the state are classified as retail liquor establishments, they are bound by bailment as well. The bailment system is akin to the game telephone, if not even half as fun: a distillery must sell its bottles at wholesale price to the WVABCA, which then marks up the price of the bottles by 28%. The distillery is then obligated to buy the bottles back at that higher price, then mark them up another 10% to match prices held by surrounding retail liquor license holders, thus tampering with their competitive price point. And after the bottle has been sold to a consumer, the distillery must pay a 10% Market Zone Tax back to the WVABCA, which is then distributed to the local liquor stores in the surrounding area.  As Losey puts it, “it’s an upside-down model.” The more bottles they sell – the more money they lose. 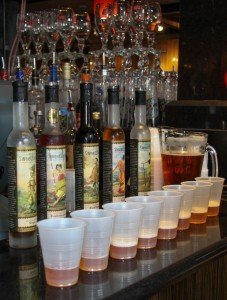 In an agreement brokered in 2000 to assuage the fears of the recently privatized retail liquor distributors, small distilleries agreed to be classified as retail liquor establishments, with the promise that in 2010 the law would be changed to accommodate them and their unique needs. But 2010 came and went without any change. Despite the success of Bloomery’s new tasting room, the distillery has felt the pressure of the taxes levied against them so acutely they have closed their doors. And if they cannot lobby their local legislators to change or re-interpret the current regulations, they will  shutter for good.

Bloomery may just be the first to fall. Nine other distilleries such as Black Draft Distillery, Smooth Ambler Spirits, and Pinchgut Hollow Distillery, are all hoping for the regulations to be changed to give them a fighting chance in the liquor market. If the legislation is not reinterpreted, these businesses might be forced to relocate to other states with lower taxes and clear distillery rights.

For many West Virginia residents, the grief over Bloomery’s closure is rooted in far more than simple frustration. As Del-Colle says, “the fact that it’s our own state that could be killing something so important for the community is truly tragic.”

[blocktext align=”left”]“The fact that it’s our own state that could be killing something so important for the community is truly tragic.”[/blocktext]West Virginia residents have taken up Bloomery’s cause, and Losey has seen an outpouring of support from their local community. Bloomery has sought their own legal counsel and has been working alongside the Distilled Spirits Counsel of the United States to help solidify their case. But the process is lengthy.

Bloomery urges their consumers and fans to become involved and help sway an upcoming vote in their favor. We encourage Belt readers to do the same. Here are some actions you can take:

Zoe Gould is a writer and educator in the great city of Philadelphia.