Cleveland harp bluesmen Colin Dussault and Mr. Stress hail from different eras and have distinct stylistic approaches, but they’ve become great friends over the years. Stress, aka Bill Miller, who’s white but plays in the black style of Little Walter and Sonny Boy Williamson, helped bring the Delta swamp to nightclubs around University Circle in the 1960s. Now 70, he grew up in the projects along 30th and Central in the 1950s and learned his art in a dive called Giffy’s run by a man with no legs.

Dussault, who grew up in Lakewood and built his white-boy working-man’s group into one the area’s premier party bands, headlines at Rib Cook Offs and Put-in-Bay summer bashes. He’s the first to admit he’s no harmonica virtuoso. 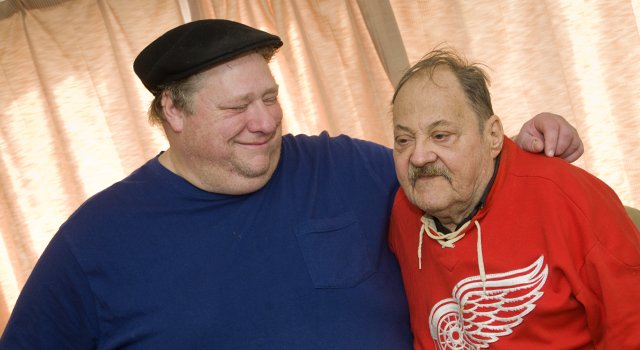 Though he first heard him live in the 1980s, Dussault knew about Stress long before that. In the 1960s and ‘70s, the Mr. Stress Band played to shoulder-to-shoulder crowd at joints like The Coffeehouse, The Brick Cottage, and the Euclid Tavern. Rare footage from the Coffeehouse in 1967 shows well-behaved college kids in black turtlenecks listening astutely to the band’s raw, below-the-belt strains.

“I grew up moving furniture,” says Dussault. “I started doing that when I was five years old, carrying lampshades and pillows for my dad. As a teenager, I remember packing houses on the East Side of Cleveland. And every time I packed a house, I packed records, and there were always Mr. Stress Live at the Euclid Tavern records. Everybody had one. They’re ubiquitous. I told myself then, when I grew up I wanted to be like Mr. Stress.

Their friendship cemented years ago at a Blues Society meeting at the old Wilbert’s nightclub. “We were discussing why we play music,” Dussault recalls. “Everybody’s up there talking about music and poetry and their artistic visions. And I think my answer was I remember the smell of moving pads, and it beats moving furniture.’ Stress loved that. He said, ‘I swear, he was the only fucker who was honest.’”

Stress has a small record collection, four crates’ worth, while Dussault has enough to line all the wall space in typical Lakewood two-flat, basement included, “but with a few exceptions, almost every record he has, I have,” says Dussault.

In January, Dussault’s moving background came in handy when Stress had to move his records and harmonicas into a one-bedroom apartment on the third floor of Musician’s Towers in Cleveland Heights. The building used to be a retirement home for musicians in the union, but membership dwindled as good-paying live gigs dried up, and now it’s filled with Russian immigrants and only a few musicians. 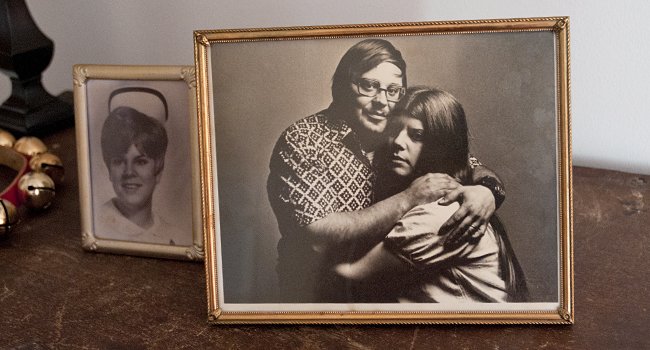 The saga began on December 13, when Dussault got a call from a mutual friend saying that Stress was in a bad way. His Lakewood landlord, fed up with his smoking (which may have started a small carpet fire), had started the eviction process. His furniture was scheduled to go out on the lawn on Dec. 16. Around the same time, Stress, who is on Medicaid, also suffered a couple of small strokes. “I believe all that pressure did it,” says Dussault.

Dussault paid a visit to his old friend in the hospital.  “He was looking really bad,” Dussault recalls. With the eviction date near, Dussault got the family moving van in gear (his kin own Dussault Moving and Storage).

The apartment manager was less than cooperative. “I said, ‘I’ll be there in 10 minutes, and you can hit the buzzer and let us in, or you can call 911.” Nobody messed with Dussault and his crew, and they moved Stress’s stuff into storage for the time being.

Since then, Dussault has been spending a good chunk of his time getting Stress out of the hospital, to the Crestwood nursing home in Lakewood briefly, and then moved into his new apartment on the other end of town. “I realized that could be me—that could be any of us,” he reflects. 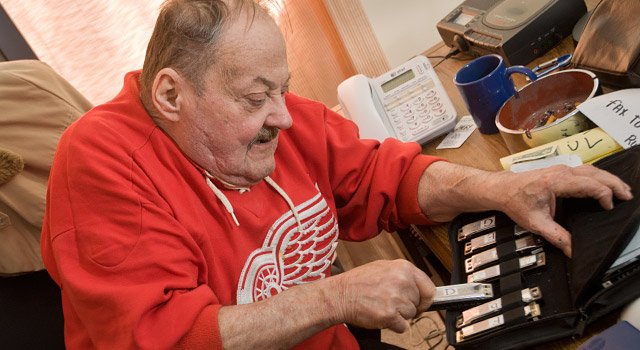 Getting Stress into Musician’s Towers was a nightmare. “It took me two weeks of fighting, calling and texting,” says Dussault.  Stress had lost track of his wallet during the eviction, and he needed a new birth certificate, driver’s license, and social security card.”

But City Hall blues fans helped speed the wheels of government. “A friend who has a friend in vital statistics walked the birth certificate out to the curb and handed it to me and I paid her the money,” Dussault says.

Other friends–including Michael Stanley, Alex Bevan, and Robert Lockwood’s widow–donated songs for a benefit CD that Dussault is putting the finishing touches on. A few more weeks, and it’ll be ready to go. “I backed a good horse in terms of people wanting to help somebody,” says Dussault.

Just after lunchtime on a recent weekday, Stress’ shoebox apartment was stuffed with visitors. Admittedly, the entourage was different than in 1967, when his band opened for Creem and “the sexual revolution was turning like a Ferris wheel,” as Stress, who’s got a vaudevillian way with words, puts it. There was his health aide–a young woman with a gold nose stud named Asia—a froggy-voiced technician setting up Stress’s Life Alert system, and Dussault. The whole lot of them bore a striking resemblance to the Muppet band.

“Here’s your hummus and pita, no hot sauce,” boomed Dussault, setting a bag on the desk. “I got it cold—didn’t know if you wanted it warm or cold. Did you find your nebulizer? I knew you would. 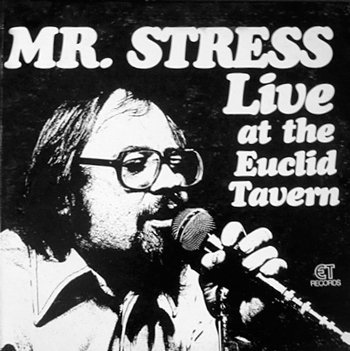 “I think we did pretty good with your move. I’m going to put your extra shaving soap in the medicine cabinet.”

Stress stopped playing gigs a couple years ago. Macular degeneration left him unable to drive. His teeth are gone, hampering his ability to run through the old licks. “I can still nag the instrument,” says Stress. “I can still bang on it pretty good. But not for four hours anymore.”

“Put your clothes in the clothes basket, man,” Dussault interrupts good-naturedly, as he putters around the apartment, straightening things here and there. “This ain’t a frat house.”

When Stress was in the nursing home, Dussault brought his six-year-old daughter along to visit–enough times that she got used to playing the piano in the dining hall. Last week, even though Stress had checked out, the staff let her in to play some more.

Dussault scaled back his schedule this winter. His mother died of lung cancer in the fall, and he wanted to rest and spend more time with his daughter. He was also worn out from taking calls from club owners at all hours, loading and unloading the band equipment on the Put-n-Bayy ferry every week in the summer, and hustling CDs and T-shirts at his shows to make a good living.

“We continually work and we continually move product,” he says. “When you play in the summer in a new place, people want to buy CDs. That’s the great hook. Then you act like you don’t have change. It’s a circus, man. You’re a carnival.”

“This is my 25th year as a band leader,” Dussault reflects, “and I’ve known Mr. Stress ever since I started. When I started playing, he was the godfather of Cleveland blues.”

He pauses. “I think I’m like him. I’m fat , I’m broke, and I hate the music business. But I just remember his name and that I saw it everywhere.”