An Unexpected Lesson In Boxing and Jack Johnson Through Poetry

Most boxing gyms are battleship grey in color – the painted concrete floors, the duct tape holding together the punching bags, the old sweat-stained tee-shirts of the fighters. It is that way perhaps because of a symbolic functionality of such drabness; this is where you pound the bags and skip the rope and get hit so hard a mist of sweat flies from your head and shoulders upon impact. And then you absorb two more body shots before that sweat hits the floor.

The colorfulish part of boxing is fight night, when the crowd is calling your name and you are a modern gladiator looking to be the last man standing, when the men and the ladies look at you differently, because they think you are far more important than you really are. You can become a myth of sorts, but it is the myth that you created for yourself through hard work in that utilitarian gym. 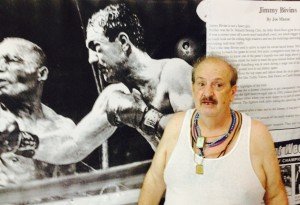 Gary Horvath has been boxing and promoting boxing for more than 50 years, and as he sits in his Old Angle Gym on Cleveland’s near west side, he often thinks about the colors in boxing. Not so much about the gold in the big belt, or the eye-popping outfits of the ring girls, but more along the lines of the racial colors of the fighters. Race has always been a big thing for the fans of the sport (you root for the ones who look like you), but to fighters like him, it never came into play very much, even in the 1960s when he was in his heyday.

“The two colors boxers know about are red and green – blood and money,” Horvath says, staring out at the black and brown and white fighters sticking and moving in the gym on a Thursday afternoon. “You’re trying to kill him, and he’s trying to kill you, and you really don’t care what color he is. And both of you want to get paid well for making each other bloody. Red and green. Like Christmas.”

This week, Horvath and his Old Angle Gym on West 25th Street will be hosting an event that does bring a little color to the Cleveland boxing world. The Anisfield-Wolf Book Awards, which recognizes books dealing with racism and human diversity and co-sponsored by the Cleveland Foundation, will be holding a poetry reading at the Old Angle Gym this Wednesday, September 10. The event begins at 7 p.m. and is free and open to the public. 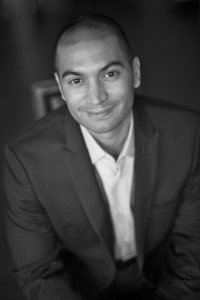 The poet doing the reading is Adrian Matejka, an Indiana University English professor whose book “The Big Smoke” is being honored this year by Anisfield-Wolf. The book is a collection of 52 poems written in the voice of Jack Johnson, the African-American boxer who won the world championship in 1910, and was perhaps the most dynamic and unsettling athlete the United States has ever produced.

Johnson was born in Galveston, Texas in 1878 to freed slaves and made no bones about it from an early age that he wanted out of the south and to be a wealthy and truly free man on his own terms. Boxing was the way he chose, and he did not see himself as a champion of his race when he became the first black world champion. He was, throughout his career, more of a champion of Jack Johnson than anything else. And he was matter-of-fact about his blackness and how it affected it all: “For every point I’m given, I’ll have earned two, because I’m a Negro,” he said in one his autobiographies.

Johnson drove fast cars (which were new then and very expensive), wore tailored suits and fur coats, had gold teeth and caroused with and married white women. It was this lifestyle that alienated both races in many ways. Booker T. Washington, the noted African-American educator of the time, referenced Johnson when he said, “A man with muscle minus brains is a useless creature.” The white press often referred to him as a “yellow-streak nigger” and the “Texas Watermelon Picaninny.”

Matejka, 43, says he was attracted to writing about Johnson in the boxer’s own voice because of how similar Johnson’s experience as an African-American athlete is to athletes today. While Booker T. Washington thought of Johnson as a dumb boxer, Johnson was anything but that. Johnson was an avid reader of Shakespeare, acted in vaudeville shows when not boxing, negotiated his own fight purses, and was a devoted historian when it came to Napoleon and the French Revolution.

“The problem for Jack Johnson was no one knew where to put him,” Matejka says. “Everyone thought of him as the dumb jock, but he was anything but that. He was incredibly intelligent and refined and that was because he was self-taught. He worked to become that. But people were taken aback by this huge black man in the generation after slavery and everyone – blacks and whites – were still trying to figure out what a black man was at that time.” 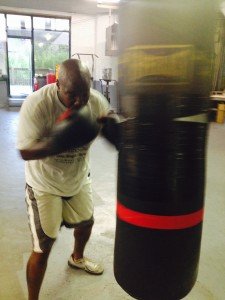 “And it was a time that is very similar to today,” Matejka says. “The early 1900s saw electricity and cars becoming everyday things – technology was changing everything – and the economic change agricultural to industrial. Plus blacks moving to northern cities from the south was a huge change in this country. And in this time period, Jack Johnson comes forward, and he becomes the most famous man in the country and people aren’t real happy with that because he doesn’t fit into their stereotypes.”

One of the reasons for that stereotypical mismatch, was that Johnson did not fight as an out-of-control brawler. He was more a defensive fighter, a smart fighter like Mohammed Ali, one that dodged punches and waited for the precise time to pounce. Matetjka explores that (and Johnson’s views on black women) in the poem “Fisticuffs:”

Some reporters say I fight yellow,


but I don’t need to use the dirty tricks.

I don’t rabbit-punch a man’s manhood

isn’t boxing at all. It’s like trying to sell

a toothless man a gum shield. I wait

for the punch instead, move to one side,

then punch back: a left hook straight

to the temple. I named the punch

after the first woman I loved: Clara.

No man met my Clara & was still standing

to talk about it. The woman quit me,

took my jewels and my roll with her.

I took the train all the way to St. Louis

to get her back, just so she could take

the rest of my money & leave again.

Clara is the reason I don’t deal with

colored women anymore. I never had

a colored girl that didn’t two-time me. 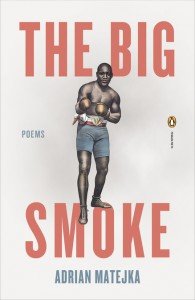 And in some ways, it was the excesses out of the ring that caused Johnson’s eventual downfall. He moved to the south side of Chicago and opened his own nightclub (open to all races, which was quite odd for the day) and frequented the city’s brothels. He began drinking too much, and was accused of spousal abuse. One wife committed suicide, while another testified against him when the feds charged him with a trumped up “white slavery” charge, because he violated federal law by transporting “any woman or girl for the purpose of prostitution or debauchery, or for any other immoral purpose” in his fancy train cars.

The problem with Jack Johnson is that he wasn’t the step-and-fetch-it man that whites wanted him to be, nor the man that wanted to take his race on his back with him as he climbed the ladder of success. When he started off a boxer working his way up, that attitude most had was that he could do what he wanted, but don’t do it publicly. That attitude about him changed over time, as Johnson wanted to be very public: speeding in one of his many cars on city streets, talking trash in the ring, carousing and kissing white women in public, and living high-on-the-hog. The message was, “you can’t do what you want anywhere.”

But Johnson was adamant about who he was. He claimed the words “if” and “suppose” were somewhat stupid. “I always take a chance on my pleasures,” he wrote. “The possession of muscular strength and the courage to use it in contests with other men for physical supremacy does not necessarily imply a lack of appreciation for the finer and better things of life.” 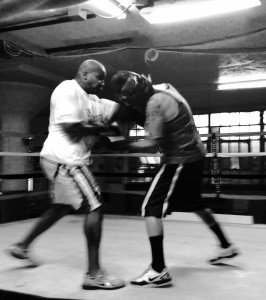 For Matejka, Johnson was a modern-day black athlete that lived 100 years ago. “The times haven’t changed all that much,” he says. “The athlete is the classic example of the American persona mythology and it has always been like that. Jack Johnson figured out what that myth meant in terms of success, and he created his own myth in the process. He did that because he always had a sense that he was a product and he was going to make money from being Jack Johnson.”

“That still happens today with all athletes and entertainers in this country,” he says. “But America is often uncomfortable when black athletes and rap stars act that way. Jack Johnson was really the first one to do that. And America was really uncomfortable with him because they never had had anyone like that.”

Poet Adrian Matejka will read from his book, “The Big Smoke” (Penguin Books 2013) at the Old Angle Gym, 3212 West 25th Street, Cleveland, OH on Wednesday, September 10 starting at 7 p.m. The Anisfield-Wolf Awards ceremony, hosted by the Cleveland Foundation and Dr. Henry Louis Gates, Jr., begins at 6 p.m., Thursday, September 11, in the Ohio Theatre, 1511 Euclid Avenue, Cleveland. A reception and book signing will follow. Both events are free and open to the public. For more information, go to http://www.anisfield-wolf.org/