The city was once a bustling and infamous Great Lakes port. How should it be remembered?


On August 18, 1852, some one hundred and thirty immigrant farmers from Norway lay sleeping among their baggage on the bustling wharf in Buffalo, waiting for the ship that would take them to new farmlands in Wisconsin. Two months earlier, two hundred Norwegians had crossed the ocean from Oslo to Quebec City. There, they had boarded vessels first for Montreal, then Toronto and Queenston, Ontario, just below Niagara Falls, sleeping on wharves, as they awaited the arrival of their connecting boats. Seventy ran out of money and could go no further. The rest of them waited for their ship through the night on the dock in Buffalo, the last city in the East.

Once a teeming Great Lakes port famed for its ships and reviled for its dockside brothels and bars, Buffalo was the brawling crossroads of nineteenth-century America, a maritime city where the Erie Canal ended and the open water began, with a rich legacy of gales, songs, yarns, shipwrecks, and lives saved and lost on the lakes’ treacherous, storm-tossed waters. One of the easternmost points on a vast inland sea, it was a harbor town so big and infamous that it became a byword for the raucous nautical life of its itinerant sailors; Steelkilt, Melville’s swashbuckling mutineer in Moby-Dick, was a Buffalonian, and even the famous sea chantey “Blow Ye Winds,” which begins …

… illustrates just how highly the Buffalo of the mid-1800s ranked in the roll call of American port cities. 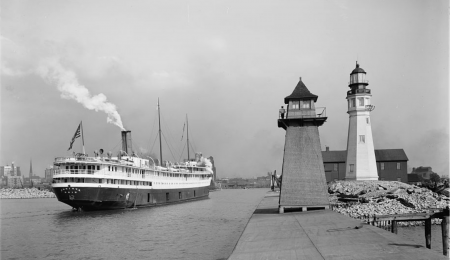 And yet, while the region’s maritime history is observed and celebrated in Cleveland, across Michigan and elsewhere on the Lakes, markers of that heritage are largely absent in Buffalo. The city’s harborfront park today features three oceangoing World War II-era Navy ships and a sprawling series of monuments to American soldiers who fought in overseas wars—and not a single word to honor the tens of thousands of immigrants and settlers who boarded ships in Buffalo and settled the Upper Midwest, or the hundreds of souls lost when those ships went down in Lakes Erie, Huron, Michigan and Superior.

“I think it’s really unfortunate we’ve lost touch with that history,” said David Gerber, a professor emeritus at SUNY Buffalo who also played a key role in saving the canal terminus from developers. “It’s like any part of history that’s lost to our imaginations and to our knowledge. We’ve lost sight of any context or conditions or situations that formed us.”

Why did the city’s maritime past recede so thoroughly from its own collective memory? One reason, undoubtedly, is the decline in maritime traffic through the twentieth century and into the twenty-first, as first passenger and then freight shipping dwindled on the Lakes — and especially in Buffalo, bypassed by the St. Lawrence Seaway since 1959. And yet other Great Lakes ports, like Toledo, Detroit and Duluth, experienced huge drop-offs in shipping tonnage but still proudly remember their nautical past.

“It’d be fabulous to see something here, a memorial or monument that showed immigrants with a baby, a sailor with a pipe, some barrels of grain,” said Shane Stephenson, director of collections at the Buffalo and Erie County Naval and Military Park, the waterfront museum that pays tribute to Western New York veterans. “Something that showed what the Central Wharf once was.”

Public historians in Buffalo have done a remarkable job over the last twenty years commemorating its history as a nineteenth- and twentieth-century industrial and commercial center. This is particularly true at Canalside, in the nearby grain elevator district and along the Industrial Heritage Trail, a bike and walking path through the disused and abandoned factory lands that bring the city’s monumental, smoke-filled past to life. Also very well documented are the journeys of immigrants who wound up in Buffalo between 1840 and 1920—especially the Irish, Germans, Poles, and Italians.

But the immigrants who boarded Buffalo ships on their way to the Midwest in the 1840s and 1850s, and the hordes of settlers from upstate New York who sailed to the Midwest with them? Not so much. “The opening of the interior of the country that happened via people proceeding westward from Buffalo is the part of the story that’s not told,” Gerber said. And, he added, that story is as significant as any in America’s past. “The larger historical reality that the movement of population and trade west from Buffalo implied for American history was the binding together of the Northern states,” he said. “In some ways that created the basis for the alignment of these states in the Civil War.”

If creating a North that stretched from the Atlantic Ocean to the Prairies seems like a far-fetched claim to make for Buffalo, consider the ways many white people speak in Ohio, Michigan, Wisconsin and northern Illinois. Those flat A’s and other shifted vowels are, simply put, an upstate New York accent. According to the linguist Dr. William Labov, whose Atlas of North American English is the prime authority on the continent’s speech, the accent traveled along the Erie Canal from places like Syracuse, Rochester and Buffalo, then across the Great Lakes with the homesteaders who settled the Midwest.

This strange amnesia for Buffalo’s maritime past seems particularly strange in view of the extensive preparations underway to mark the Erie Canal’s bicentennial in 2025. The canal’s terminus, excavated and saved from developers twenty years ago through efforts led by Tielman, now serves as the centerpiece of the harborfront park, aptly called Canalside. When gatherings are allowed again after the pandemic, the public will help hand-build an 1825 canal packet boat in a waterside pavilion, to be completed in time for the anniversary.

All this is a fine commemoration of Buffalo’s Erie Canal history. But it’s as if the city’s role in settling the Midwest began and ended when homesteaders and European immigrants got off their mule-pulled canal boats at the Central Wharf, while the other half of the journey — boarding sailing ships that often foundered in sudden storms or steamboats whose boilers tended to explode in hellish infernos — goes unremarked upon.

“Those grand fresh-water seas of ours,” Herman Melville wrote of the Great Lakes in Moby-Dick, are “swept by Borean and dismasting blasts as direful as any that lash the salted wave; they know what shipwrecks are, for out of sight of land, however inland, they have drowned full many a midnight ship with all its shrieking crew.”

Melville’s sorrowful description of death and destruction on the angry inland sea would soon apply to those Norwegian farmers waiting on the Buffalo wharf back in August of 1852, when their ship, a sidewheel steamer called the Atlantic, finally showed up. It left Buffalo and stopped in Erie, Pennsylvania, to pick up more passengers—bringing its total number to more than five hundred—before shoving off again into the foggy night. In the early hours of the next morning, those sleeping on deck were startled awake by a loud crash; another steamer, the Ogdensburg, had rammed into the Atlantic in the fog somewhere off Long Point, Ontario. Water rushed into the Atlantic’s cabins below deck. A lifeboat was lowered, but it quickly sank, carrying several people with it. One of the Norwegians, Erik Torstad, clambered to the topmost deck and jumped into the waves as the Atlantic slipped beneath the surface. He made it onto a small lifeboat; others grabbed floating debris. Torstad heard “a pitiful cry” arise from the hundreds still aboard the sinking ship. The Ogdensburg returned to pluck survivors from the water.

Buffalo has experienced more than its share of wrecks. A few years earlier, in August 1841, the paddlewheel steamer Erie left Buffalo for Detroit with about two hundred and forty passengers and had sailed only thirty-three miles when an explosion and fire, fueled by containers of paint and varnish stored on deck, consumed the ship in fifteen minutes. More than two hundred died, mostly German and Swiss immigrants. 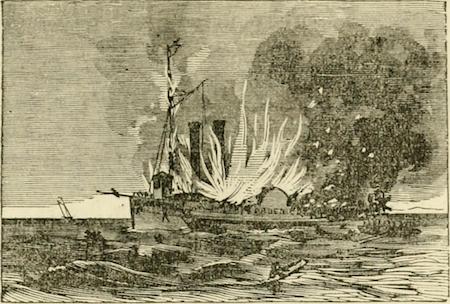 The burning of The Phoenix on Lake Michigan, 1847. By James T. Lloyd via Wikimedia.

In November 1847 the propeller ship Phoenix departed Buffalo for Milwaukee with about 275 aboard, most of them Dutch immigrants, and was in Lake Michigan when a fire broke out in its boilers. The vessel’s two lifeboats, capacity twenty persons each, were successfully launched, but all but three of the passengers left behind died aboard the burning ship or in the frigid waters.

And In June 1850 the paddlewheeler G.P. Griffith steamed from Buffalo with some 325 aboard, mostly immigrants from England, Ireland, Germany and Scandinavia, headed for Toledo. Its smokestacks caught fire off Fairport, Ohio, and the panicked crew ran the ship aground on a sandbar. It burned to the waterline, with about 275 lives lost.

Then there was Light Vessel 82, a lighthouse service boat with a crew of six anchored thirteen miles off Buffalo Harbor, sunk without a trace by the deadly “White Hurricane” storm of November 1913. A few days later a hatch cover washed ashore. On it was scrawled a handwritten message from Captain Hugh Williams to his wife:

“Has [Buffalo’s maritime history] been forgotten? Sure,” said Jack Messmer, editor of The Harbormaster, published by the Buffalo Harbor Museum. The museum is a small-scale downtown nonprofit that draws only about fifteen hundred annual visitors and is itself sadly unappreciated. While nine other Great Lakes cities boast permanently moored museum freighters or passenger steamers, some more than six hundred feet long, Buffalo has only one little exhibit hall staffed by a small band of enthusiasts.

Still, the harbor museum and Messmer’s newsletter keep Buffalo’s nautical heritage alive, brimming with tales of the city’s maritime past and present. And scores of harrowing accounts of shipwrecks — like that of the Oneida, a wheat schooner struck by a steamship in a heavy gale off Point Abino, Ontario, almost within sight of Buffalo Harbor, in October 1853. The sailing ship went to the bottom, but one man managed to climb a mast, which remained above water. He clung there in the howling wind and rain for more than twelve hours before he was rescued.

Tielman, the well-connected preservationist, told me he’s working on a series of proposals to commemorate Buffalo’s nineteenth-century heritage, all tied to the Erie Canal bicentennial, and all to be funded by the state and federal governments. “When Joe Biden is elected, the first thing down the pike is an infrastructure project,” he said, perhaps optimistically. “I’m working hard to make sure there’s a plan in place for when the dollars come. That’s where we get a monument to this seafaring thing.”

“You want to go down there,” he said of Buffalo’s old harbor, where East once set sail for West, “and just burst with pride that you’re in a unique place. A significant place.” ■

Jeff Z. Klein is an author, radio producer and former New York Times journalist whose memoir about growing up in Buffalo appeared in the anthology Voices From the Rust Belt.