Building An Art House In Pittsburgh

A few years ago, Vanessa German sat on her front porch working on the sculptures for which she’s become well known — complex black Madonnas made of found objects. Her presence on the porch had become a familiar sight in the neighborhood. On that day, a group of children walked by and were curious — they wanted to know what she was doing and how they could help. German realized they wanted some company — and the opportunity to make art.

She gave them paint and brushes, and whenever she was working on her porch the kids were welcome to work alongside her. For German, it was a logical course of action.

The kids painted on bricks found in alleyways, slate left over from demolished buildings, and slabs of fences from homes long abandoned.

Homewood, where 39-year-old German lives and works, is a Pittsburgh neighborhood that dates back to the early 1800s. These days, it’s about one-third blighted. The impoverished community has the highest murder rate in a city that is otherwise lately touted for its resurgence and livability.

“Whenever a family is able to leave Homewood, they typically do,” explains Demi Kolke, who works at Operation Better Block, a nonprofit serving Homewood. For those who don’t leave, prospects can be bleak, with high asthma rates for children and lower-than-average life expectancy for adults. 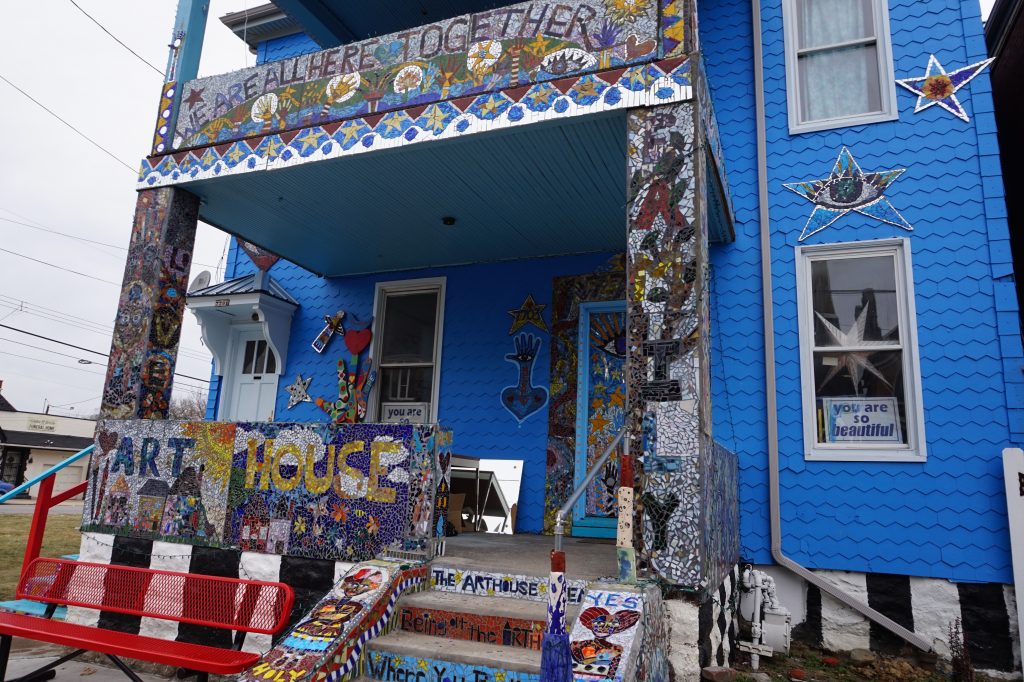 Other communities in and around Pittsburgh bear similar burdens. But about a mile in one direction from Homewood is Point Breeze, one of the city’s wealthiest neighborhoods. Among its well kept homes sits famed industrialist Henry Clay Frick’s former residence, now a museum.

When Los Angeles native German moved to Homewood eight years ago, she knew living there wouldn’t be easy. “[But] I wanted to live in the same place I worked,” she says. The community had a proud arts history, having raised the likes of Erroll Garner, Billy Strayhorn, and John Edgar Wideman. A contemporary quilt artist she admired lived there as well.

Almost immediately after moving in, though, the violent realities of Homewood became clear. And equally clear to German was the community’s need for a space to create — and to heal.

On a summer day, German was at work in Homewood, her splattered smock hanging lopsided on her frame. Peaceful Mitchell, a nine-year-old girl, stood alongside her, making mosaics that would eventually adorn the exterior of a house dedicated to community art. Love Front Porch, as these sessions became known, needed a home of their own. German guided her, reminding her to pull her goggles down and to cut pieces of glass away from her face and closer to her torso.

“You got it,” German said, as Peaceful worked on the mosaic of an eye. “Down and away, just keep going.”

“You see, these eyes are crying a little bit,” German said to the girl.

“Because we have to hold space for the good and the bad. The happy and the sad,” German responded. 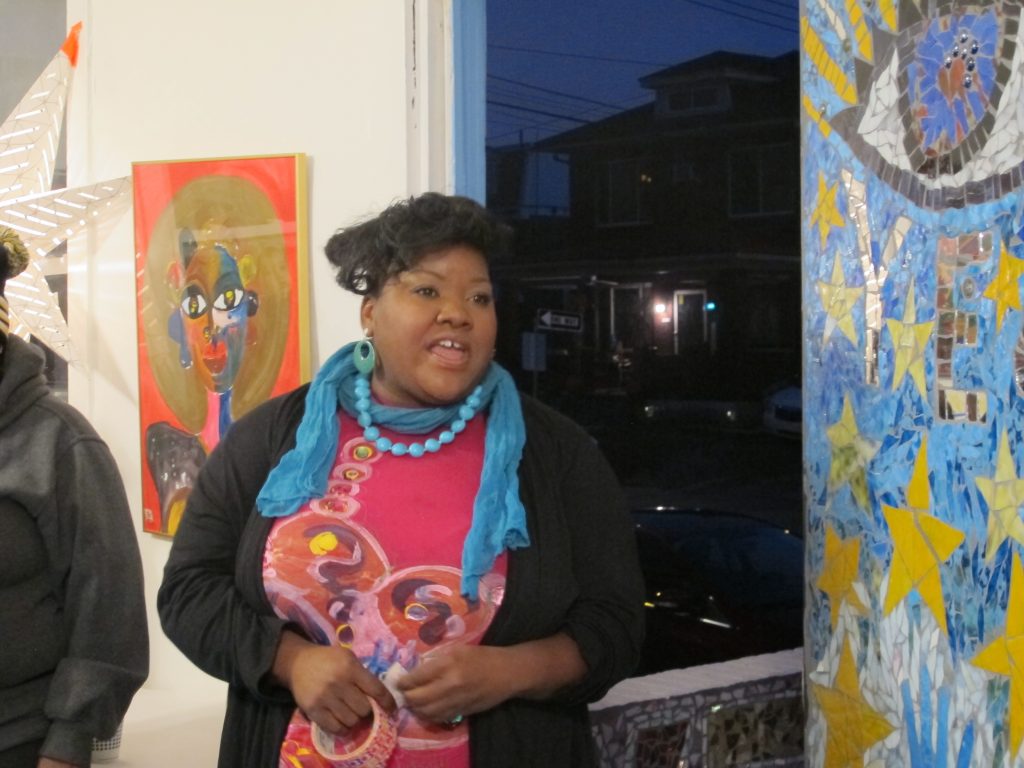 German didn’t plan to be a teacher, nor did she plan for her home to become an institution.

“I was just trying to meet the need in front of me,” German says. As she worked with Peaceful, she waved at people walking or driving by. Some honked and hollered, while others stopped to share news. In the course of an hour she congratulated a mother whose son will be playing high school basketball, and offered condolences to a 42 year-old man who had lost his brother. For those who came to the porch, she offered goggles and pliers and invited them to join her in making mosaics. That’s essentially how the art house started — and how it’s been sustained.

“It was another neighborhood option,” German says. “It wasn’t just kids; it was seniors and parents, just making art.”

She turned back to Peaceful, who had been dutifully working. “You’re a good artist, Peaceful. I think you know that. You are very talented. Do you know that?” German asked.

“You are; you are very good. And you’re very focused too. You work hard.”

Peaceful didn’t say anything in response — but spent the rest of the morning working alongside German with a smile on her face.

German’s citizen art has grown beyond Homewood. In 2012, while on her porch, she heard a round of gunshots. She decided to print up signs, the kind politicians use on lawns that read: Stop Shooting, We Love You. They ended up all over the city. 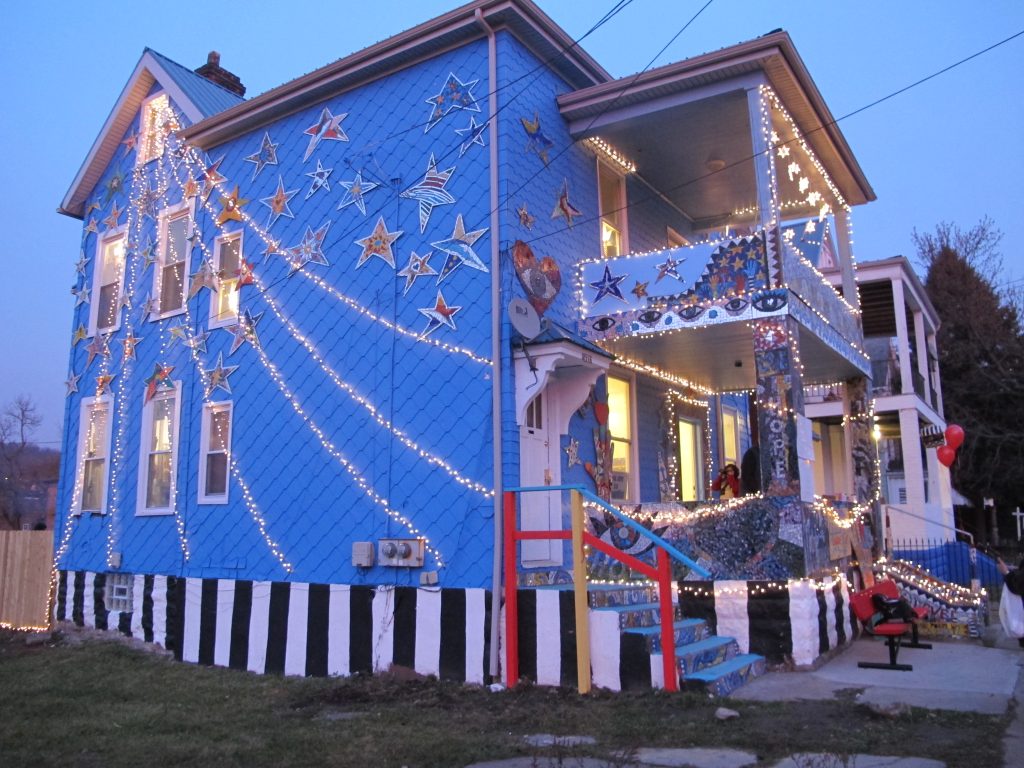 Eventually, the art house moved from her front porch into it’s own actual house, one on loan from a neighbor. Last year, German purchased a second house, just up the street, to eventually become the art house.

As her work in Homewood has evolved, her reach in the art world has grown. Her mixed-media sculptures are exhibited in museums and galleries all over the country and abroad. Some sell for upwards of $25,000.

Yet, her success hasn’t made her impervious to the community she lives in. She spoke of the heartbreak — the deaths of friends, bearing witness to prostitution pick-ups and drug drop-offs, and the knowledge that when gunshots ring out, it’s likely she knows the victim.

“I don’t think that I realized as much how it was affecting me because you just go on,” she says. “Which I think is what people do — you just go on.”

The heartache she speaks of turned literal this year when she was prescribed hydrochlorothiazide for high blood pressure which could affect her heart. German’s doctor informed her that recurring trauma causes cortisol levels to rise, and when they remain elevated, serious health problems can ensue.

[blocktext align=”right”]“I was just trying to meet the need in front of me … It was another neighborhood option. It wasn’t just kids; it was seniors and parents, just making art.”[/blocktext]Her therapist has told her she feels too much. And although she travels regularly for work, her home base is still plagued by crime and violence. It’s like the Centers for Disease Control and Prevention has famously said: your zip code determines your health outcomes more than your DNA.

Allegheny County’s Health Department keeps birth and death records but statistics on the prevalence of depression or diabetes in a zip code are difficult to come by.

David Finkelhor, Director of the Crimes Against Children Research Center in New Hampshire, agrees. He has spent the last four decades researching the effects of primary and secondary violence against children, but contends there isn’t enough research on the health effects of living in violent communities. And while data is lacking, he believes German’s work “can be a transformative or ameliorative experience that would be the equivalent of a treatment program.”

German has seen that theory play out — when shootings occur, children cry, and their grief is expressed in their artwork.

Although art houses exist in other parts of the country, this one is a grassroots effort, not backed by a corporation or nonprofit. The money supporting the house came from German and her friends. And she isn’t actually teaching art — she never studied education or psychology — it’s simply a drop-in center. Still, she often gets letters from people in other cities inspired by her work.

“Maybe it reminds people of what’s possible for them,” she says. “I think there’s some part of the story that makes people nod their head and say, ‘Yeah — I could do something right where I am, with exactly what I have right now that could make my life more whole — there’s just the idea that you can be right where you are.”

In December, the house German bought formally opened as a community art house. At the housewarming, the inside of the brightly painted and mosaicked house was packed. Out back, neighbors took turns working the grill. Children sat at tables painting with pastels. Others prepared to put on a talent show. German walked through the house, as dozens of people — little kids, mothers carrying babies, men in three-piece suits — clamored for her attention. Children tried to press artwork into her hands, while other people wanted to hear what she had to say. 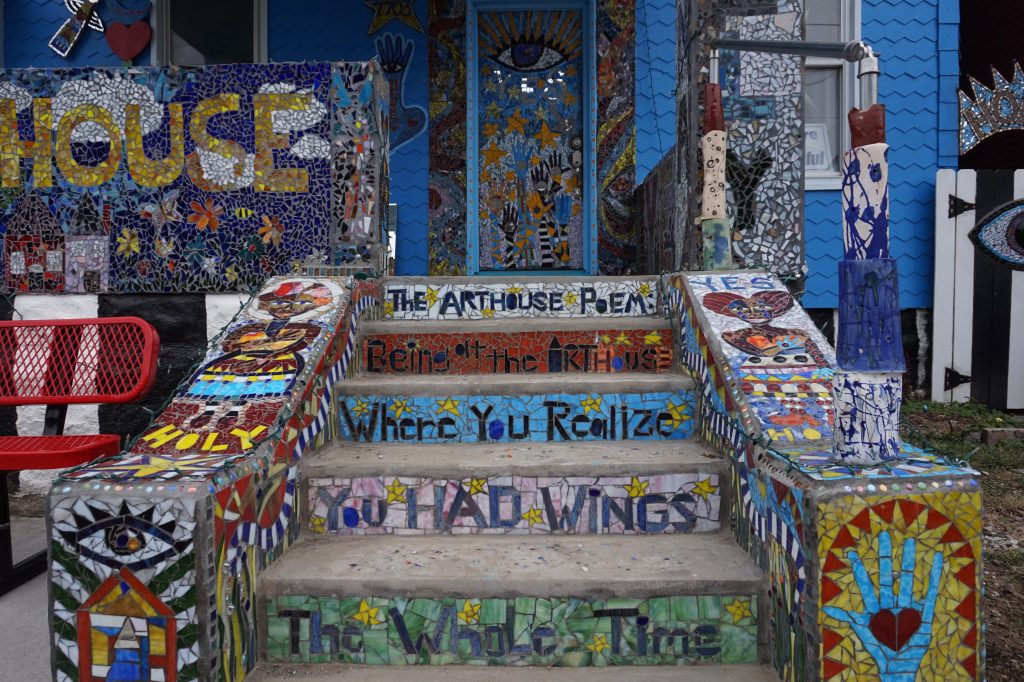 Ziarrah Green, who’s 12, has been painting with German for years. When asked about violence in the neighborhood, she ticked off a list of shootings on her fingers. Making art helps.

“It calms me down and makes me forget about everything that happened,” she said. “Usually if I don’t paint or nothing, I still remember it. And I don’t like to remember stuff that’s horrible. I like to remember nice things.”

German won’t stay in Homewood forever. She says her heart can’t take it — literally or figuratively. She dreams of finding a partner and moving to a home by the foot of a mountain where they both make art — “like Diego and Frida — but not volatile.”

Back in August, when asked if she felt an obligation to this community, she didn’t miss a beat.

“I feel an obligation to my soul,” she said, as she affixed a piece of glass onto one of the stars that would soon adorn the art house.

___
Erika Beras is an award-winning independent journalist. She is a regular contributor to NPR programs and Scientific American podcasts as well as other networks and shows. She lives in Pittsburgh.