Celebrities Descend Upon Flint — For Better Or For Worse

It started with Cher calling for Rick Snyder’s head, and really, who could blame her? This was in January, when the media had fully descended upon Flint, Michigan, in the midst of its water crisis, which all started with the decision of a manager appointed by Governor Snyder to save money by switching the city’s water source to the local Flint River. This was hailed by many as a great decision until rust- and urine-colored water started coming out of faucets, boil advisories were issued and, as of October, state officials finally fessed up that there was lead in the water as well. Throw on top of all that the fact that state officials were telling Flint residents that the water was fine and to drink up, to serve the poisoned water to their children’s developing brains, perhaps a death warrant for the guy in charge shouldn’t seem too far out there.

Unless, of course, it came from Cher. 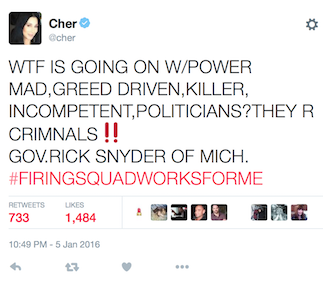 Not that there’s anything wrong with Cher caring about Flint, it’s just one of those things that seems strange if you live in Flint and not used to people caring about what happens to you. At most, as a Flint resident, your city is a punchline whenever someone decides to make a list of dangerous or miserable cities. At worst, it goes ignored, by everyone, including branches of government that might have noticed Flint needed help before it couldn’t even drink the water.

So when Cher gives her very specific instructions for how Snyder is to be, ahem, murdered (“#FIRINGSQUADWORKSFORME”) it puts you in something of a strange place. Part of you is glad the pretty girl is paying attention to you, at last. The other part of you can’t help but wonder just what in the hell took so long.

After Cher came the deluge. Snoop Dogg hung out with the mayor. Macklemore, like Snoop on tour in Detroit when he decided to make the hour’s drive north to Flint, met with a bunch of kids at a local music club. Flint natives Michael Moore and Jon Connor have made trips home and Sandra Bernhard, also from Flint tweeted about the crisis. Among the other keyboard warriors: Mark Ruffalo, Magic Johnson, Jim Gaffigan. Big Sean donated $10,000. Meek Mill: $50,000. Pearl Jam: $300,000. And of course, political celebrities have popped up around town as well. Jesse Jackson made an appearance, and Hillary Clinton has visited once; Bernie Sanders has publicly called for Snyder’s resignation, and both will take the stage in the Vehicle City March 6 for the seventh debate in the battle for the Democratic presidential nomination.

There are big names and, finally, big money making their way to Flint. Apparently, celebrity firepower is what was needed for state and federal aid to finally start rolling in. As Russell Simmons said recently while speaking at a Flint church: “It’s not just Snoop and Will Smith and Puffy and me. The president has to come here, the attorney general has to investigate the attorney general, who has to investigate the governor, who has to go to jail.”

But it’s still hard to tell just whether or not this is simply the thing to do, an expensive version of the latest social justice hashtag.

Nayyirah Sharrif, a Flint resident and activist, was there for the speech by Simmons.

[blocktext align=”right”]“To me its easy to get swept away in the excitement, and I don’t feel like celebrating this. I think it’s great that they’re coming and helping, but I don’t want to be rejoicing. The reason they’re here is as grim as it gets.”[/blocktext]“I didn’t really care. I’m not starstruck. It was just like, ‘Hey, what’s going on?’” she says. “I mean, I guess the socially conscious celebrities want to lend support and help out, but I think that like most of them I want to do more than deliver water. We have to communicate that because they don’t really know what to do.”

She and other organizers have been canvassing the city and say they keep discovering people who aren’t having water delivered, or who aren’t aware there’s any available, or aren’t able to go to the local fire stations to get it. So donating water is great, she said, but everyone’s donating water. She’s more concerned with getting the water to the people, and whether or not there are still people out there whose doors she hasn’t knocked on who need the information she wants to personally deliver. If Snoop is in town, hey, great. But she’s got work to do.

Jonathan Diener is a local musician and volunteer at a youth music venue in downtown Flint. He’d been upstairs at a committee meeting when he came downstairs to find the rapper Macklemore sitting there with about 30-40 people, many of them kids. He stuck around.

What impressed him the most, he said, was that there were no cameras, no media.

“It was super interesting, because instead of doing the typical thing of posting things on Instagram or doing selfies with the mayor, he was just like, ‘I just want to talk to people and listen,’” Diener says. “They didn’t talk about it the day of, the day after. It was literally for the experience, and he didn’t use it as a PR stunt.”

But, Diener adds, even the things that do look like PR stunts might not really be so bad.

“The way I think about it, especially now after talking to a bunch of people, even if they’re doing it for themselves, it’s still going to raise awareness. You think about Snoop Dogg posting [on social media], that’s a couple of hundred thousand people that might otherwise never have known about it,” he says. “Those people have more of a reach than the average person who lives in Flint.” 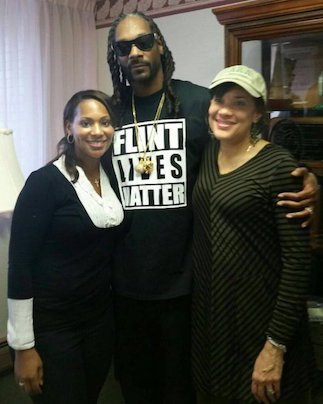 Melodee Mabbitt, like Sharrif, is a member of the Flint Democracy Defense League, a group formed after Flint was put under the control of the emergency manager that has been active in water-related issues from the beginning. She agrees with Diener that it’s not the motives that matter, but rather the message and the attention.

Like Shariff, she’s not exactly starstruck, and seeing people who are is one thing that bothers her.

“To me its easy to get swept away in the excitement, and I don’t feel like celebrating this,” she says. “I think it’s great that they’re coming and helping, but I don’t want to be rejoicing. The reason they’re here is as grim as it gets.”

She said she’s been “avoiding celebrities like the plague,” and said if she ever does meet them, she just hopes it doesn’t have anything to do with water.

“Jada Pinkett, I want to meet her for a different reason, I guess,” she says, but adds, “Snoop was pretty tempting. If I had seen him at the grocery store I would definitely buy some gin and juice.”

___
Scott Atkinson is a freelance writer based in Flint, Michigan. For the past several years he has been an award-winning features writer for The Flint Journal. He teaches writing at The University of Michigan-Flint. Atkinson is also the editor of Belt’s forthcoming book, The Flint Anthology.

Scott Atkinson’s other Belt pieces can be found here.