Dad Rock: Tom Petty and the Music of My Father

When we buried my mother in a sylvan plot on the north side of Evansville, Indiana, she took with her volumes we’d never be able to transcribe. Her sourdough bread recipe that she made from memory. The meaning of her college artwork, tucked away in the laundry room. How it felt to be one of the first female reporters on television in our town.

She married my stepfather, Randy Moore, when I was three. He was dad immediately in my unknowing toddler brain, and then increasingly so as the years wore on and scant visits with my biological father faded. The discrepancy of my last name, Osmon, was the only indication that the aluminum-plant time cards, Southern Baptist sermons and bucolic farms of the Moores weren’t blood-related. But to my father’s warm family of preachers, homemakers and workers, I was a Moore far as you could hurl a rock—and from where we stood, on the Indiana side of the Ohio River, you could hit Kentucky by doing just such a thing.

Soon after my mom died, I tried to excavate the details of their marriage. Living with the fresh regret that I didn’t ask many difficult or personal questions, or even benign ones, as my mother grew increasingly sick, this inquiry of the present seemed urgent. I turned it on my father. I asked him once if they had a song. “Here Comes My Girl,” he replied without hesitation. “Well…that was my song for her.”

My father is a broadcast newsperson, like my mother, when she was alive. It’s the reason my brother, sister and I sound like a choir of NPR correspondents among an extended family whose vocal affectations are something of a big tent revival. Despite his enviable diction, he’s man of few words when out from behind the anchor desk. He doesn’t believe in wasting them, he’ll say. Those that do manage to cross his lips are practical and considered, and occasionally gut-busting hilarious.

But in that moment, they were none of those things. Turns out my pensive father was a romantic like the rest of us, and the third single from Tom Petty & The Heartbreakers’ 1979 breakout album, Damn The Torpedoes, soundtracked his thoughts of my mom. In their life together and, more acutely, now that she was gone.

“You know sometimes, I don’t know why
But this old town just seems so hopeless
…
But when she puts her arms around me
I can somehow rise above it
Yeah, man, when I’ve got that little girl standin’ right by my side,
You know, I can tell the whole wide world, ‘Shove it!'”

I imagined my father, telling the world where to stick it. Unexpected, if not entirely shocking. That the song could conjure within him passions and protests that he didn’t often physically demonstrate was compelling. The idea that my mother, her arms around him, could arouse and quell such feelings? Well. My eyes swelled. 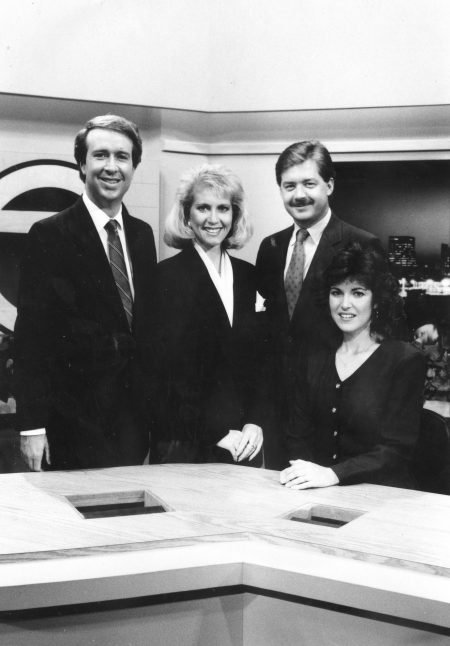 The writer’s parents on set at Channel 7 in Evansville, Indiana. Her mother (right) was an anchor, and her father (second from right) was a sportscaster. Photo courtesy Erin Osmon.

For much of Middle America, Tom Petty is a throughline. He’s the soundtrack of bowling alleys, garage mechanics and dollar stores. He’s the voice in the background of graduation parties and back seat makeouts, the three o’clock triple threat on the local FM dial. A survey of his catalog today reveals his singularity. How a man who wrote such relatable anthems as “Even the Losers” and “I Need to Know” could also contribute to endearingly peculiar ditties like “Don’t Come Around Here No More,” and then author throat-grabbing ballads like “Wildflowers” is enigmatic in today’s pop music industrial complex. It is, in fact, unheard of. Though the Petty Effect is something of a bygone era, it’s extraordinary in its magnitude. Something so far reaching we took it for granted.

My dad is one of the increasingly rare breed of one-town career news anchors. For forty years, he’s been the soundtrack to family suppers and bedtime routines, breaking news, local elections, and high school athletics. He welcomes the odd handshake from a local old timer, who is comforted that the man from television also purchases oranges and Folgers coffee at the Schnucks grocery store. But in an era of cord-cutting, such extensions are increasingly rare. At age 60, and with the controversial Sinclair Broadcast Group buying up stations like his in neighboring states, he often jokes that his impending retirement comes at a good time.

He’s won a few regional Emmy awards, and an Edward R. Murrow award, for his reporting, and was just inducted into the Indiana Associated Press Broadcasting Hall of Fame. But for me growing up, and so many about my hometown, he’s the guy you fall asleep to on the sofa, exhausted from a long day of clock-punching and fifth-grade homework assignments. He’s the pillow that cradles your tired skull.

There’s something simultaneously impressive and tragic about this level of visibility: Tom Petty, Mainstream Rock Fixture; my dad, Local News Fixture. Like a Craftsman drill or a pair of Redwing work boots, your reliability has christened you an essential in the day-to-day lives of working people. You become a focused point of discussion only if there’s a malfunction. For Tom Petty, it was his sudden death from cardiac arrest last October. For my dad, it was when my mother, Ann Moore, was diagnosed with inoperable pancreatic cancer in 2006.

As word spread—and words are stealthy like that, in communities such as ours—my parents chose to embrace the waves of shock, concern and casseroles. They kept a blog, chronicling their journey through doctors and clinical trials for the worried and curious, and there are features in the Evansville Courier & Press and Evansville Living magazine. When the story ended in a funeral, visitation lines snaked out the door and into the parking lot, at times lasting two hours. Folks from the far corners of Vanderburgh County waited with the steadfastness of the Queen’s Guard, compelled to peer into my father’s eyes for just a few seconds, to tell him, my siblings and me just how sorry they were. My kindergarten teacher Mrs. Craft even showed up, and so did our childhood babysiter Rhenda. Losing my mother was a clear and present tragedy; those events of July 2009 seemed to occupy the entire town.

In the year since Tom Petty died, the Internet has lamented his overlooked genius, how the man who wrote such solidly anthemic, simple, and pure rock songs—not to mention utterly eccentric pop numbers—was so easily neglected. Many people argue it’s because of his ubiquity in the late ’70s and ’80s, during which time he clocked fourteen top ten hits on the Billboard Mainstream Rocks Songs chart. There were fourteen more in the ’90s. “Dad Rock,” they call it.

At 15, I was a moody punk, engaged in a series of cliche teenage rebellion tactics involving cigarettes, joy riding, and the malt beverage Zima. I was submerged in 1990s alternative rock, independent punk rock, emo and college rock platters. Inside of me, too, burned a torch for the music of my parents—Petty, CCR, John Prine, Neil Young, but I was too concerned with outré alterna teen posturing to admit it.

In a desperate attempt to relate to me, my father used his press credentials to score gratis tickets to Petty’s 1995 “Dogs With Wings” tour, in support of his 1994 solo album Wildflowers. The CD spun ad nauseum in the family vehicle, at the behest of DJ Dad. It was a favorite of mine, and I was delighted at the prospect of attending the show. But revealing such excitement  would’ve defied my teenage code of ethics.

At the concert I reveled—though not demonstratively so—in live renditions of Petty’s hits, including the title track of the tour’s crux: “Wildflowers.” As wispy Cirrus clouds of marijuana exhaust filled Evansville’s Roberts Stadium, I looked to my dad and asked, “What’s that smell?” (I knew what it was but felt the need to test him.) “A funny cigarette,” he responded, without missing a drum beat.

A funny cigarette. The professional communicator and thoughtful-yet-unwordy human had managed to both sidestep a very awkward question from his bratty daughter and answer it all the same. He’d outwitted and parented me in one breath. In that moment Randy Moore seemed to me as extraordinary as Tom Petty performing on stage. 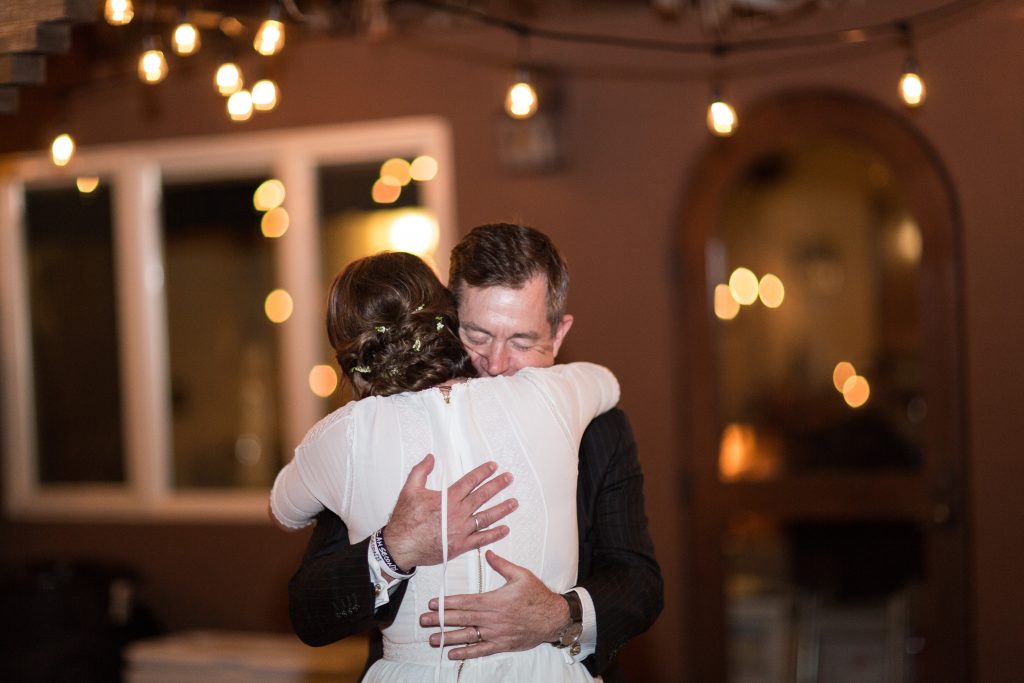 The writer and her father at her wedding in 2016. Photo courtesy Erin Osmon.

In the years since my mother’s passing, my dad has added “minister” to his list of credentials. Their three-year journey through sickness and death had revealed in him a desire to evangelize the beliefs that he and my mother held so dear. Today, he’s both a full-time news anchor and part-time pastor, giving sermons and support at a tiny Methodist church in rural Boonville, Indiana each Sunday. He also performs weddings and funerals.

On September 4, 2016, we stood just outside the official barriers of Zion National Park, on a precipice overlooking a canyon. Here, he officiated my wedding. It was an outdoor hippie ceremony with fields of desert sage, homemade food and a small rustic lodge filled with crystals and tapestries. We invited just forty people. I insisted on but one time-honored wedding custom: a father-daughter dance, to Tom Petty’s “Wildflowers.”

Swaying under a sea of string lights and stars, throughout the three-plus minutes, we didn’t say many words. In their place emanated a love and a reverence deserving of Tom Petty, and of the father in front of me. Since the night of our shared concert experience more than two decades prior, it has become my song for him.

Erin Osmon’s music journalism has appeared in a host of print and online publications, including Pitchfork, Uncut and Rolling Stone. She also writes in-depth liner notes for album reissues. Her book about the late musician Jason Molina, titled Riding with the Ghost, was released in 2017 and is due out in paperback in December.