What Chicago’s Major Taylor Trail Could Be

Marshall “Major” Taylor was a cycling legend. Residents say the trail that bears his name, on Chicago’s far South Side, is a community asset in need of investment.

Marshall “Major” Taylor was the LeBron James of his day—a superstar athlete and internationally revered. Taylor was born in rural Indiana in 1878, but grew up in Indianapolis. He got his first bicycle when he was twelve years old. A local bike shop hired him to perform stunts wearing a soldier’s uniform, which earned him the nickname “Major.” He won his first bicycle race at age thirteen and went on to win races across the United States and around the world while calling out racism in many instances. By 1899, Taylor held seven world records for bicycle racing. In 1928, he wrote an autobiography fittingly titled The Fastest Bicycle Rider in the World.

However, Taylor’s fortunes and health faded later in life. He moved to Chicago in 1930 and died two years later in the charity ward of Cook County Hospital. He was only fifty-three years old. Like many prominent Black figures of the past, today Taylor is largely unknown outside of Black biking culture. In 1948, a group of prominent bicycle enthusiasts, including Frank Schwinn, arranged to have his body exhumed from an unmarked grave and reinterred in a simple gravesite. Taylor’s final resting place, in Mount Glenwood, Illinois, is located not far from the trail that bears his name.

The Marshall “Major” Taylor Trail is more than six miles long, running through five different wards in the city—from Dan Ryan Woods and 81st Street to the north through Roseland and West Pullman to Whistler Woods and the Village of Riverdale to the south. Fashioned along an abandoned rail line in the 1990s, the trail was formally opened in 2007. The scenery varies greatly along the various sections of the trail, from industrial areas to dense greenery. And residents say it—like its namesake—hasn’t received the attention it deserves. 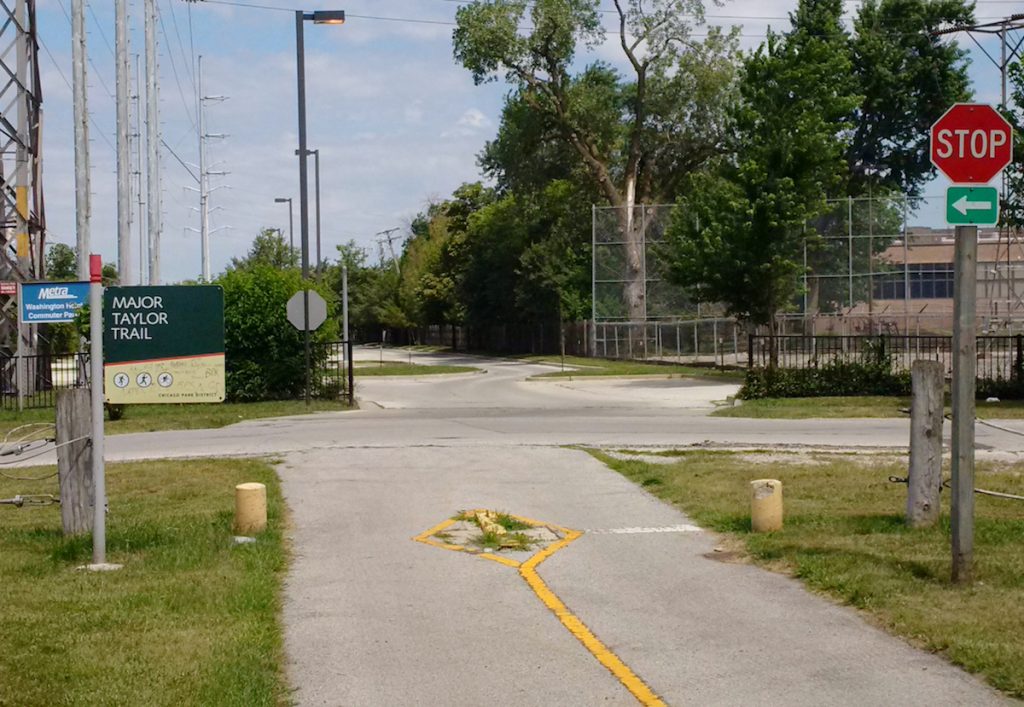 The motto of Chicago is “urbs in horto“—city in a garden. However, residents in Chicago’s South and West Sides have less access to green space than residents on the more affluent North Side, where the city has been developing projects like the recent elevated rails-to-trails-type project, the 606, on the city’s Northwest Side. South Side residents say investing in South Side projects, like the existing Major Taylor Trail, could help correct this imbalance.

Four different municipal and governmental entities are charged with maintaining the Major Taylor Trail within and beyond the city limits: the Forest Preserve District of Cook County, Chicago Park District, the Chicago Department of Transportation (CDOT) and the Chicago Department of Streets and Sanitation. Each of the first three entities employs its own signage strategy along its section of the trail. As a result, prior to the installation of mile markers along the length of the trail in August 2021, many riders and even residents of adjacent neighborhoods were often confused about the existence of the trail, according to Dr. Brenda Dixon, founder of Community and Neighborhood Improvement Projects (CNIP), an organization formed by Dixon to seek funds for a mural along the trail.

“I guarantee that the average person, unless they’re actively involved, would never think that the trail that goes into Whistler Woods is the (same) trail that goes into Dan Ryan Woods. I guarantee that they do not know that they are (both) the Major Taylor Trail. I didn’t know it until I became more actively involved, and I live literally eight blocks away from the 115th Street section of the trail. I’m not exaggerating. I grew up there; I walked past there as a child, and I never would have thought it was part of the same trail,” Dixon said.

Achieving uniform signage along the trail was a major priority, especially along those sections of the trail adjacent to business districts, according to Anne Alt, president of the Chicago Cycling Club and an advocate for the Trail. “Because it’s a rail trail, there are fences or walls that cut it off from adjacent neighborhoods. There are people in those adjacent neighborhoods that don’t know that the trail exists, and there are people riding the trail who may not be from those neighborhoods who don’t know that adjacent business districts exist…‘oh, there are restaurants over there, I could stop there and get lunch. Or, oh, there’s a Walgreens over there. I could get that.’ You can’t see it from the trail,” Alt said.

Another goal is to increase the number of amenities such as benches and bike racks, which are scarce along the Major Taylor Trail despite being plentiful along bike trails in other parts of the city, although there are a few Divvy bike share stations located along the trail, Dixon said. “I see people walking from as far as 105th down to 115th.  But if there was a place where they could lock their bikes, they would ride their bikes there. The entire trail is missing bike racks. The only location that I can recall there being a bike rack is right at 95th Street, but not in our neighborhoods,” she said.

Aside from these challenges, the Major Taylor Trail features several distinctive aspects which make for an enjoyable ride. The scenery varies greatly along the various sections—from industrial areas to dense forest preserve greenery. Taylor is featured on a mural located at 1043 W 111th Street. A second, four-hundred-foot-long mural covering a bridge spanning the Little Calumet River in West Pullman illustrates many of Taylor’s achievements, along with quotes reflecting the discipline he applied to both racing and life. 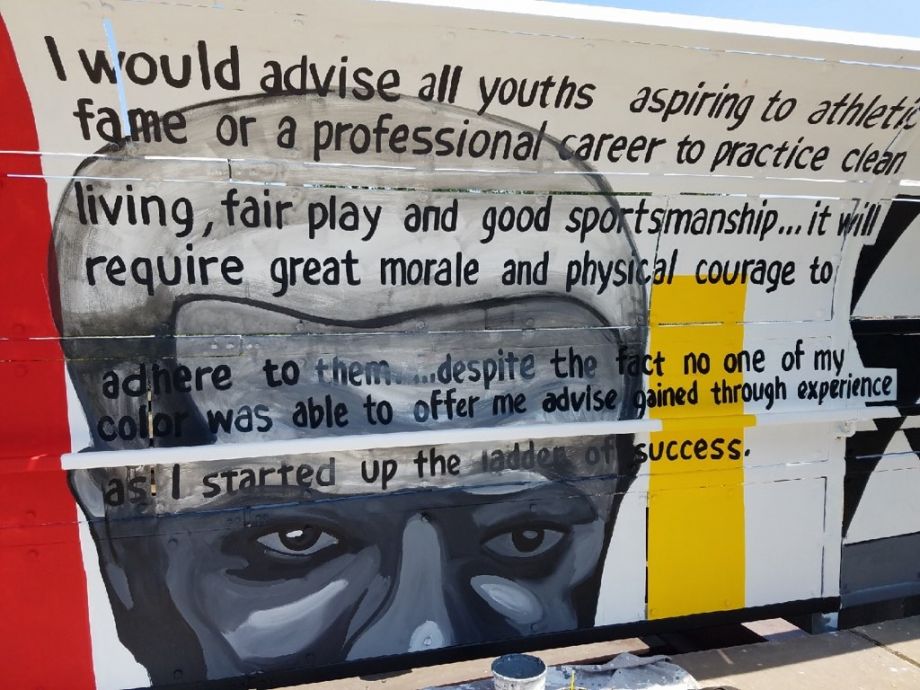 Dixon was a driving force behind the second mural, created by Chicago artist Bernard Williams in 2018. Prior to the creation of the mural, the bridge was covered in graffiti, which Dixon says rendered it an imposing, even intimidating eyesore. “There’s going to naturally be increased traffic,” she said. “I didn’t want the increased traffic to turn north and decide, let’s go to the bridge and see what’s here, and run into all the graffiti and say, ‘oh, no, we’re going to turn around.’”

Projects like the mural on the bridge covering the Little Calumet River go to the heart of the respective missions of the Major Taylor Cycling Club of Chicago (MTC3), Major Taylor Trail Keepers Chicago and Friends of the Major Taylor Trail. The three groups also collaborate extensively in advocating for increased bike ridership among Black, Brown and Indigenous people along with maintenance and enhancement of the trail. Each organization hosts numerous events throughout the year, including bike rides of various lengths and challenge levels, cleanup events along the trail and virtual and in-person meetups. It’s all part of what they call “Making the Major proud.”

Audrey Henderson is a freelance writer based in the greater Chicago area. Her work has been featured in Next City, Chicago Architect magazine, Global Traveler, and Transitions Abroad, along with trade and consumer print and online publications worldwide.