“On Strike for Better Schools”


For more than a week now, more than thirty-two thousand Chicago Public Schools (CPS) teachers and staff have been on strike. The Chicago Teachers Union (CTU) is demanding that the school district writes a guarantee into their contract to hire more nurses, librarians and social workers, as well as smaller class sizes. The night before teachers began their strike, veteran teacher Moselean Parker described how, in her twenty-five years of teaching, “One thing I’m sure of is that schools on the South and West sides don’t have what they need—my black and brown students don’t have what they need.” She continued “Give us the books, give us the psychologists, give us the social workers, give us the nurses. I’m not going to sit down until we provide our students with the right to learn.”

Staffing for these critical positions in CPS is severely out of joint with recommendations by professional organizations. While the National Association of School Nurses recommends one school nurse for every 750 students, for example, in Chicago there is just one for every 2,800 students. Some schools have a nurse in the building just one day a week. This week, parent Catherine Henchek wrote an op-ed describing how the school district had told her that her special-needs son could not receive his daily anti-seizure medication unless she came in to administer it herself.

This most recent action continues in the tradition of the CTU’s landmark 2012 strike, when teachers rallied under the slogan, “fighting for the schools our students deserve.” That strike transformed Chicago’s political landscape and inspired a wave of political action by teachers nationwide. And this year, for the first time, the CTU is being joined on the picket lines by special education assistants, security guard, bus aides and custodians who are members of a separate union, SEIU 73. More than half of those workers make less than $36,000, with many working second or third jobs.

On Wednesday, the two unions diverted their morning picket lines downtown, turning the Loop into a sea of red and purple. As teachers rallied outside City Hall, Mayor Lori Lightfoot gave the first budget address of her term, which began in May. At the outset of the strike, Lightfoot said that there was no money available to meet teachers’ demands, a position she repeated on Wednesday. The unions have repeatedly called attention to what the city does have money for: More than $2 billion in public subsidies earmarked for new mega-developments, not to mention the billions that Chicago was prepared to hand over to Amazon last year, should it have been chosen as the site of the company’s hew headquarters.

Negotiations are continuing on some the union’s key issues, and both sides reported movement on Thursday. Still, it seems likely the strike could continue into next week. At a rally following the mayor’s budget address on Wednesday, CTU Vice President Stacy Davis Gates struck a hopeful note. “Our school communities deserve everything that we are fighting for,” she told the crowd. “Ten years ago, we said that we were going to lead the fight for the schools that students deserve…What I come here to tell you today, is that we are one step closer to winning what we deserve.” 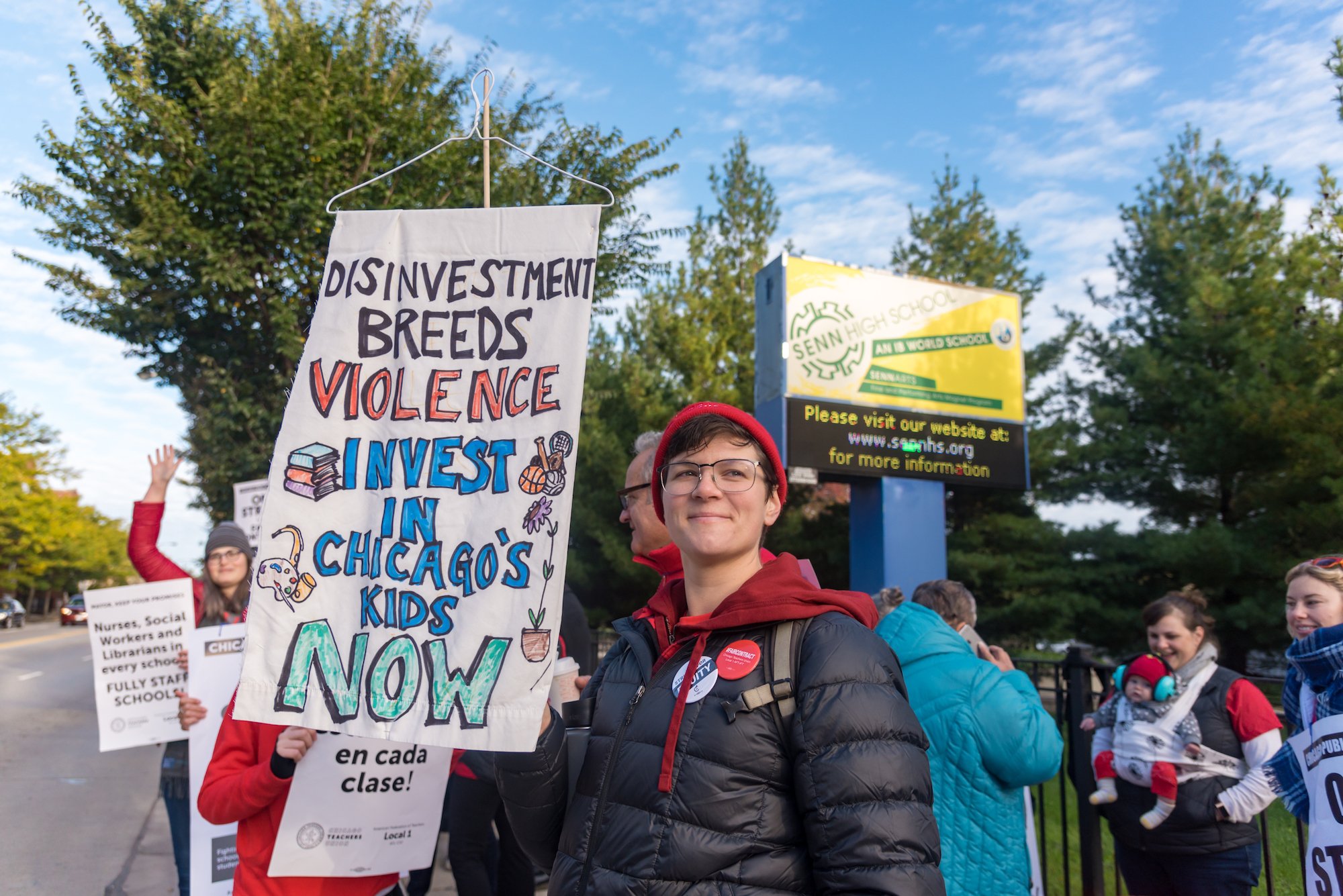 On October 17, 2019, the first day of the #CTUSEIUstrike, a Senn High School teacher on the picket line holds up a home-made banner that reads “Disinvestment Breeds Violence. Invest in Chicago’s Kids NOW.” The message alludes to the CTU’s demands for structural changes such as pushing the city to create more affordable housing, defunding police to fund communities, and other ways to materially improve the lives of not just their union members but their students and students’ families as well. 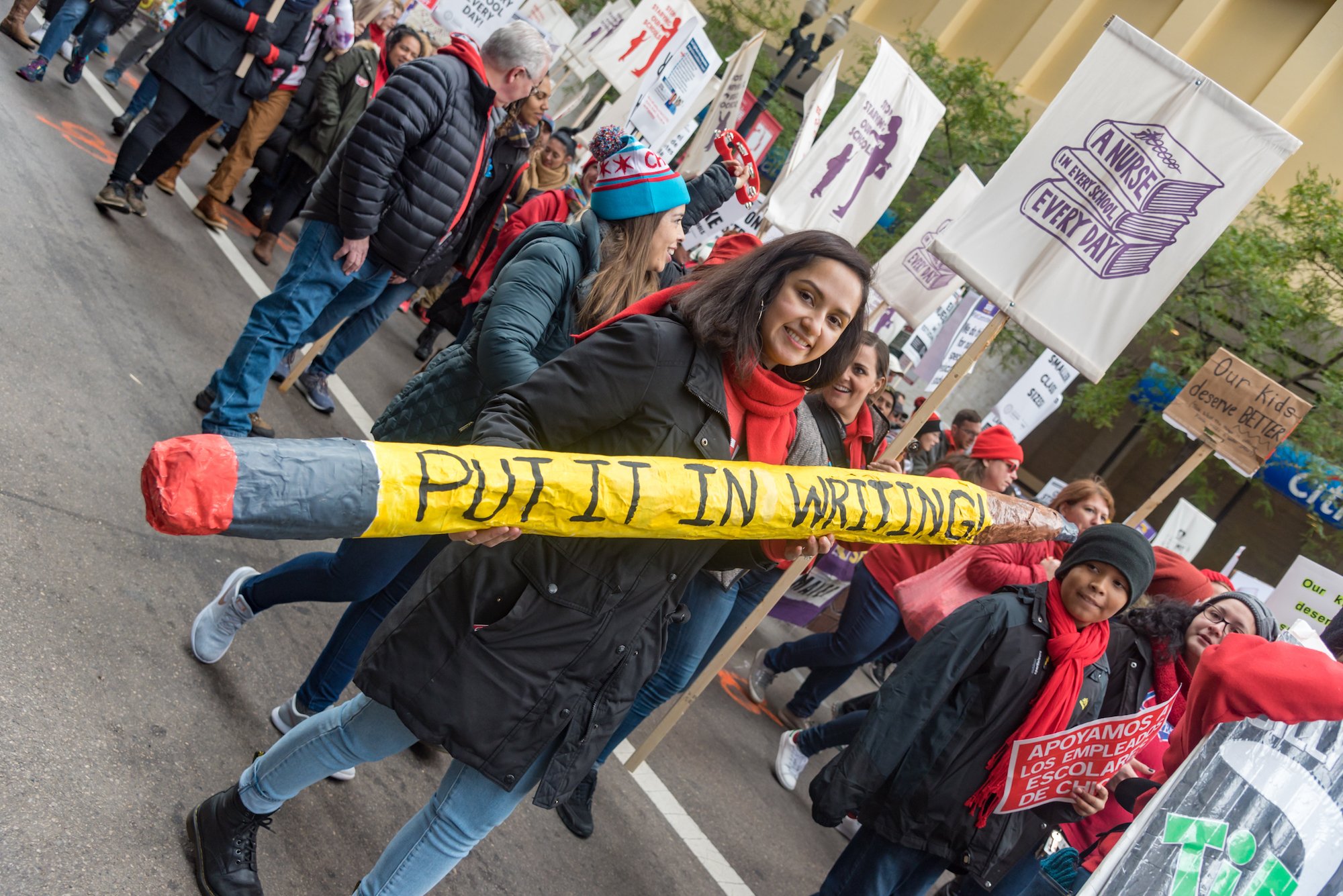 A marcher holds an oversized pencil sculpture with the message “Put It In Writing,” a reference to Mayor Lori Lightfoot’s educational platform promises. 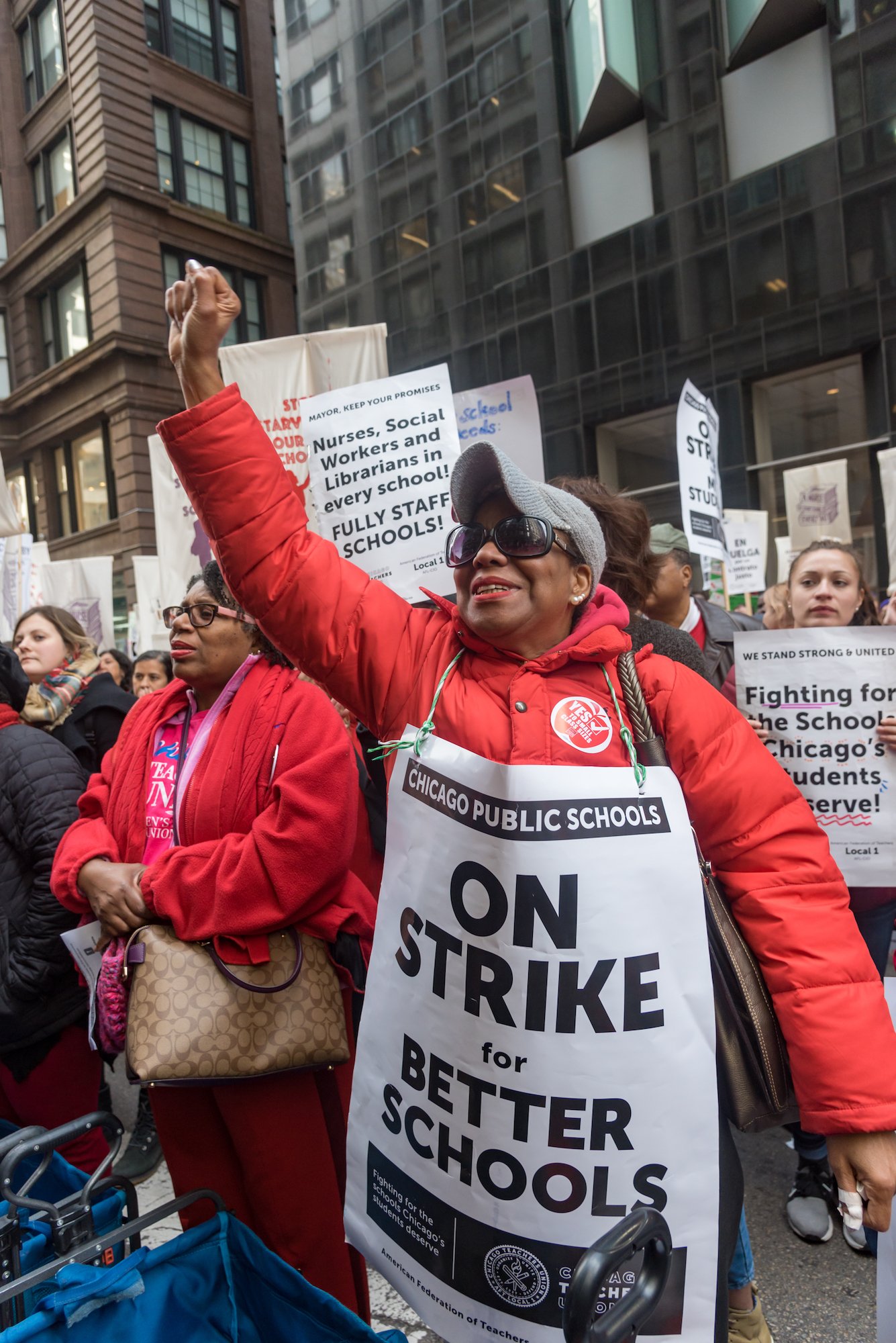 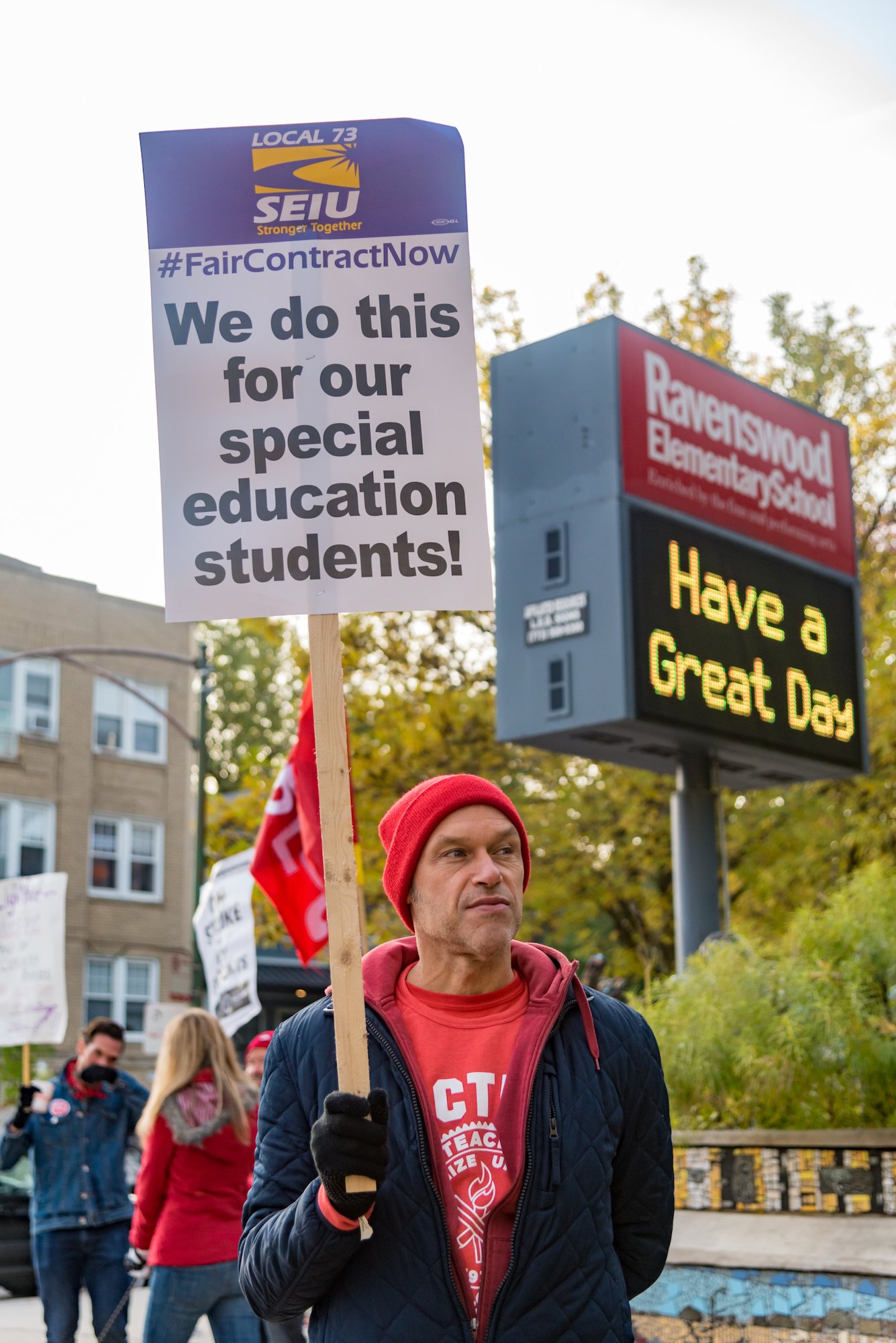 Members of both the CTU and SEIU Local are taking part in the strike, as each union works to negotiate contracts with the city. 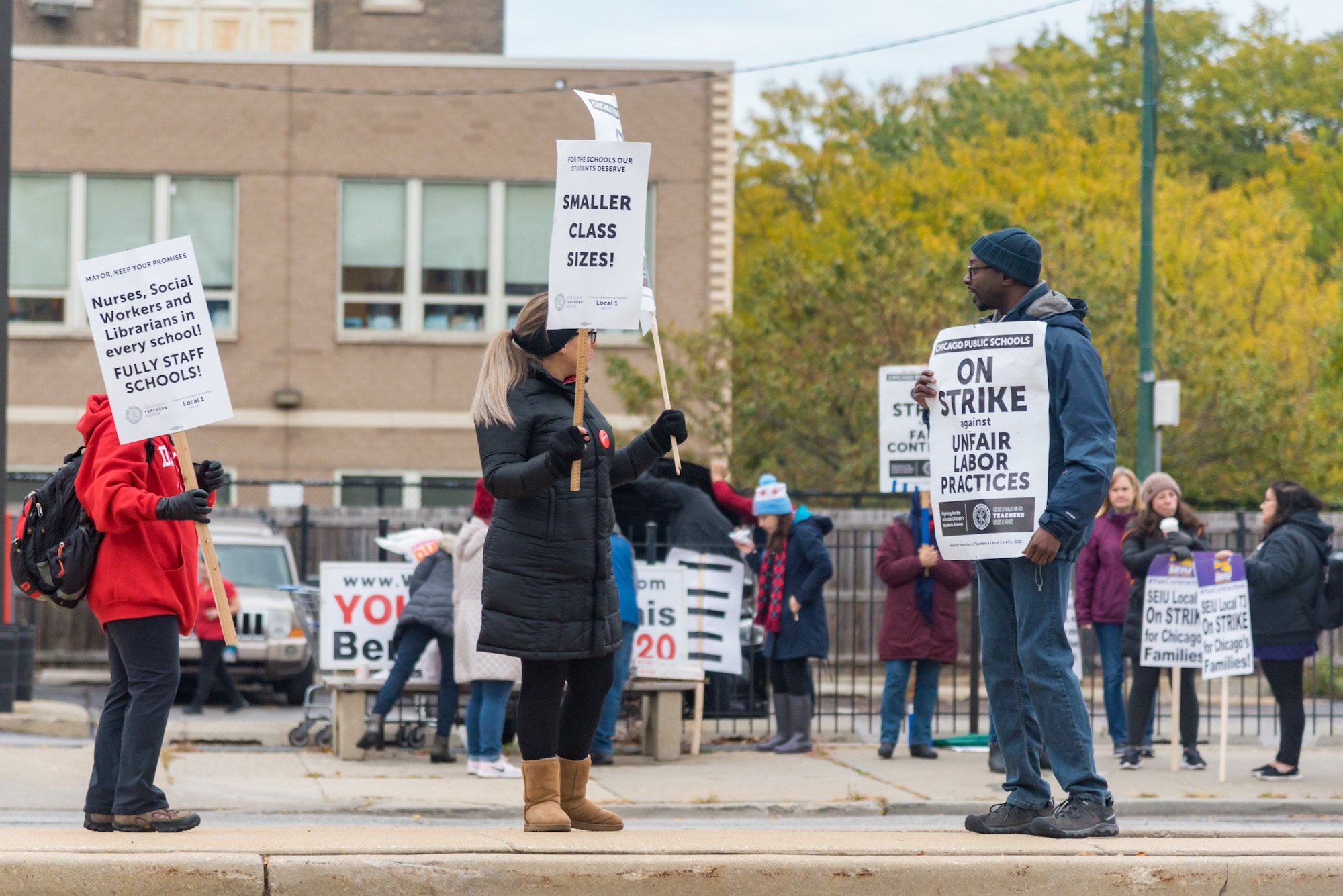 Teachers and staff at Stephen K. Hayt Elementary School picket during rush hour on Clark Street in Chicago’s Edgewater neighborhood. Their signs depict specific demands of the CTU for the new contract, including caps on class sizes and support staffing such as nurses, social workers, and librarians in every school full-time. 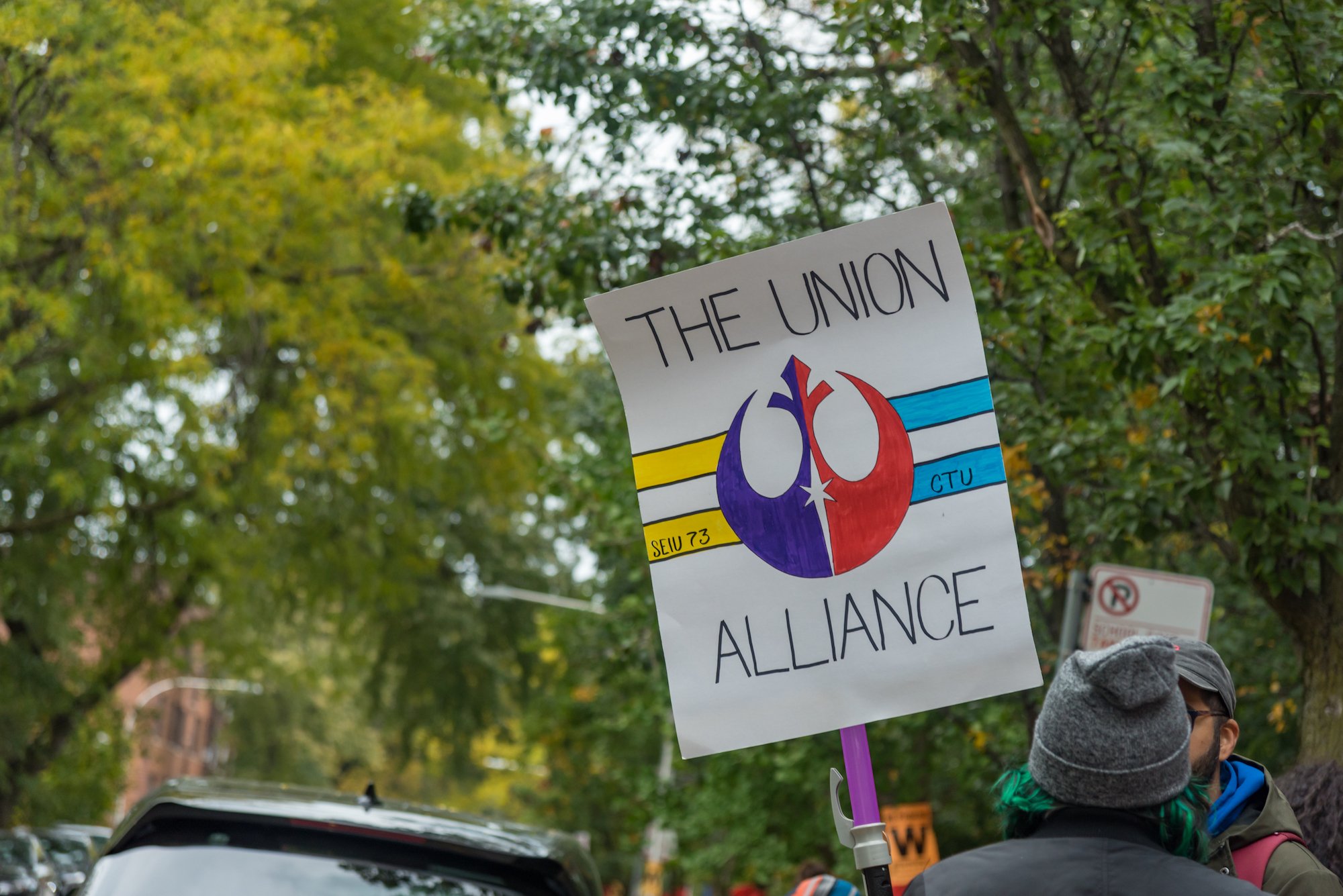 A picketer outside Helen C. Peirce School holds a sign that references the symbol for the Star Wars Rebel Alliance to illustrate the solidarity between SEIU Local 73 and the Chicago Teachers Union. Picket lines and rallies have often burst into spontaneous call-and-response chants alternating between “CT-who?”  “CTU!” and “Who are we?” “Seventy-three!” This “Union Alliance” has been an example of the power of collective organized action. 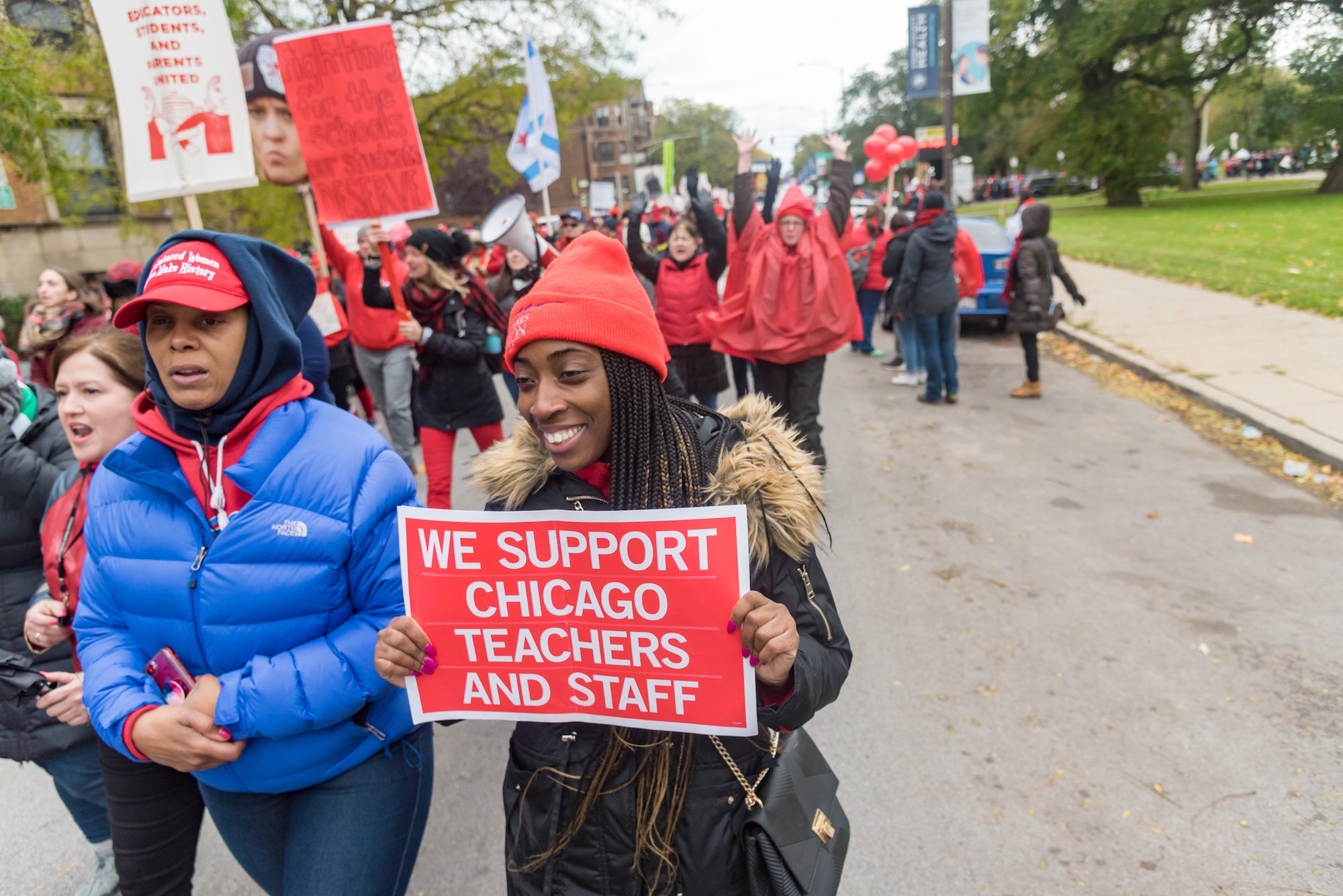 Following a rally at Dyett High School, marchers took to the streets through Washington Park and surrounding neighborhoods on the South Side, which has witnessed decades of disinvestment, including numerous school closings. In 2015, Dyett was the site of a historic thirty-four-day hunger strike by parents/grandparents, educators, and community members, which saved the school from being closed and led to the CTU’s Sustainable Community Schools initiative. 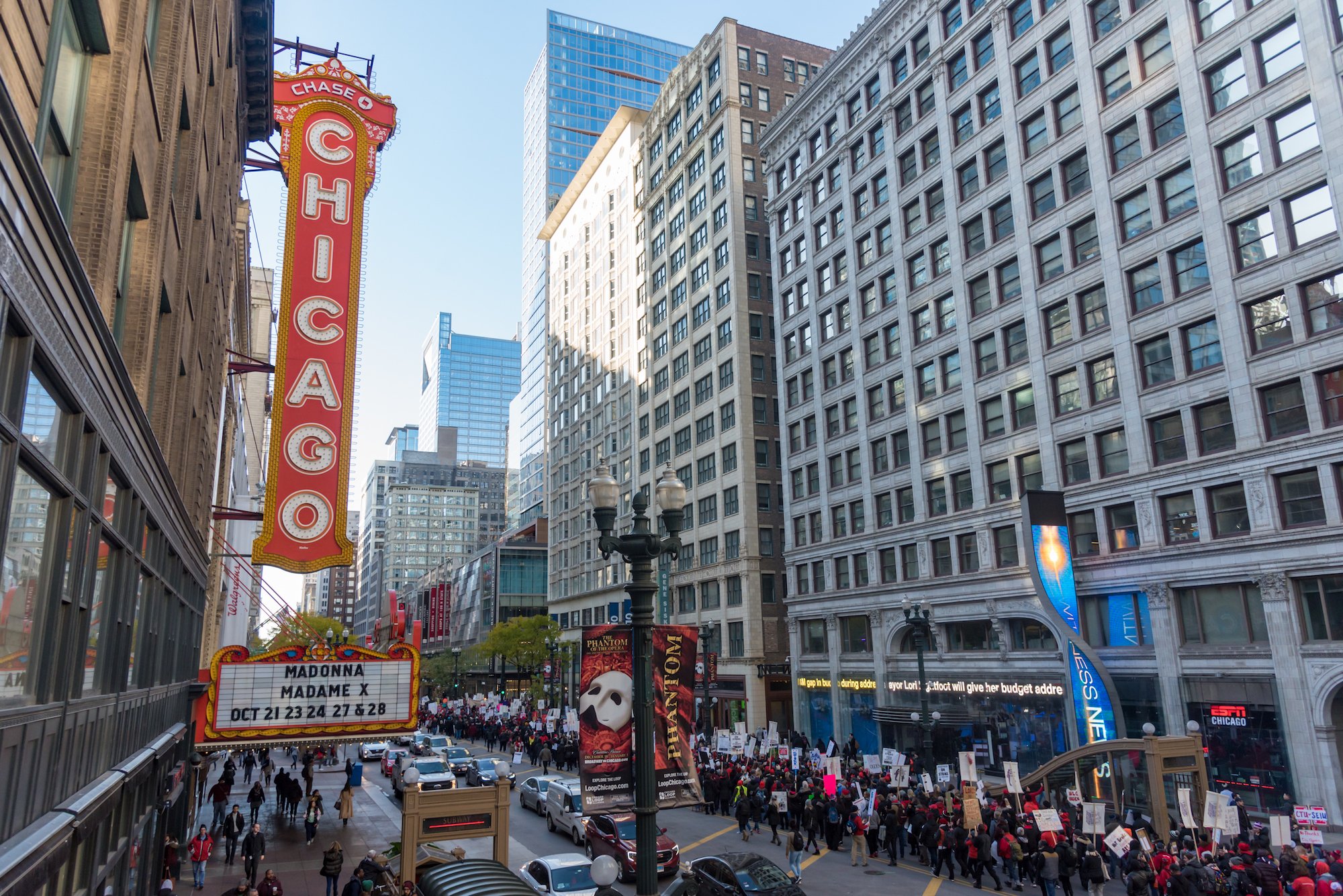 On October 23, the fifth day of the strike, CTU and SEIU directed their members to congregate early in the morning in the Loop instead of picketing in front of their schools. Four feeder marches of schools from different geographic regions of the city congregated in four different locations downtown and marched simultaneously to City Hall, where the Mayor was scheduled to deliver her budget address to City Council. Once the groups converged, they surrounded City Hall entirely, filling the surrounding streets, as well as Daley Plaza across the street. 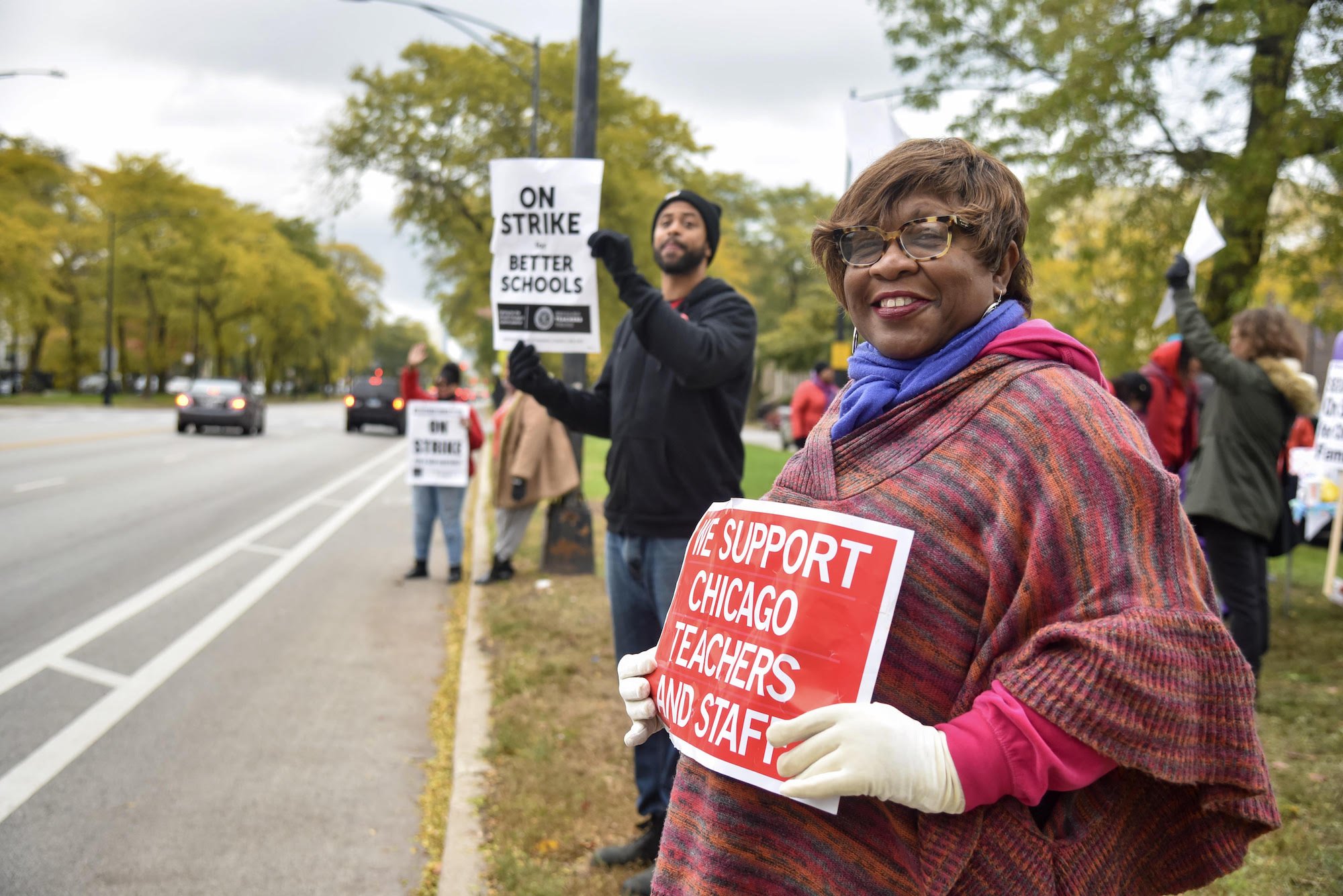 A teacher pickets on South King Drive outside Mollison Elementary School in Bronzeville, a historic Black neighborhood that was once home to icons such as Ida B. Wells, Gwendolyn Brooks, and Margaret Burroughs. With the rapid gentrification of Bronzeville in recent years, teachers, parents, and community members have fought persistently to keep their schools open, with access to necessary resources, joining the broader  collective struggle for equity and access. ■