The river is a trickster.

The Cuyahoga flows south from its headwaters in the farm country thirty miles east of Cleveland, and then turns back on itself to scrawl a U-shaped path back toward Lake Erie. It is the most polluted, but also the most biologically productive watershed in the region. It is sick and wounded, but still full of life.

Massive industrial ships navigate the lower stretch of the river, yet a few miles upstream you could wade across the whole mainstem. Locals call it the Crooked River, as it meanders aimlessly across its floodplain. The Cuyahoga didn’t carve this valley by its own force, but rather flows lazily over an ancient, larger river’s path.

The river caught fire maybe a dozen times, yet the apocryphal story about its demise is full of half-truths. Its degradation became a symbol and a rallying cry to save other places.

As a son of Akron, I see the Cuyahoga as my home river. We drink from of the headwaters, and flush our shit downstream. Despite decades of running away, I find myself rooted and raising a family on its banks.

It is not a beautiful river—it runs muddy, smells rotten, and its buffer of wildness is a thin veneer. You are not supposed to touch the water, for fear of bacterial infection.

I stand in the Cuyahoga up to my waist, letting the current pull me downriver.

In my pouch, I carry sacred talismans—hand-made effigies of thread, feathers, beads, brightly dyed furs, and holographic tinsels. There is a steel barbed hook in the heart of each offering. 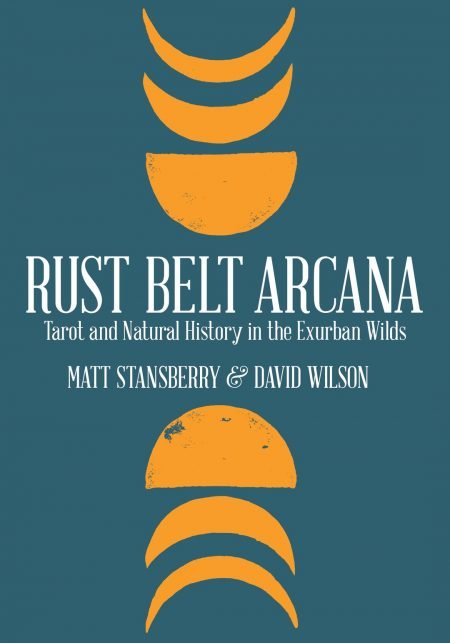 I hold a ten-foot graphite wand in my right hand, and I begin a motion overhead, creating lemniscate loops, expertly casting lines and offerings over the riffled surface of the water.

To the uninitiated, my actions seem strange and arbitrary. But every choice, every movement, is based on years of practice, instinct, and ritual.

I am looking for a connection, an acknowledgement or response from nature. I am imposing meaning and causality on a random world. I am deciphering the hidden relationships between rainfall, the current’s swirl over a boulder, the amount of sediment in the water, and the likely behaviors of animals unseen.

I’ve been a fly fisherman almost my entire life, which is to say a liar. The lie is an act of creation. A deception creates an opening, a crack between worlds—prying a space between what is perceived and accepted, and what might be imagined and possible.

In the tarot tradition, the Magician blurs the line between hero and con man. Every serious angler I know falls somewhere on that continuum.

“The most popular images today of this card show him as serene, powerful, with an infinity sign over his head and pointing his magic wand up towards the heavens as if to draw down divine energy,” writes Rachel Pollack in Tarot Wisdom. But this noble depiction evolved from an original image of a tabletop grifter with shells and a ball. “The grand Magus of the modern tradition is revealed to have his roots in someone who is at best a street entertainer, and at worst a con artist.”

According to Lewis Hyde, author of Trickster Makes This World, the mythology of the trickster is the story of intelligence rising from hunger, predators outwitting prey. “If the brain has cunning, it has it as a consequence of appetite; the blood that lights the mind gets its sugars from the gut,” writes Hyde.

I wouldn’t eat anything that came out of this river, but the skill and awareness are based on a predatory instinct.

Steelhead swim upstream, trout as thick as my leg. They have dark green spotted backs and pink stripes down their flanks and cheeks. The fresh ones are silver. A large fish might be thirty inches long.

They do not belong here in this brown industrialized watershed, but rather the cold, clean rivers on the other side of the continent.

Steelhead are a sea-run strain of rainbow trout, native to the rivers of the West Coast. Wildlife agencies across the Upper Midwest stock steelhead in Great Lakes tributaries to create a recreational fishery, to give us vestigial hunter-gatherers something to do with our weekends.

Fisheries managers release two million juvenile steelhead in the rivers on the southern shoreline of Lake Erie each spring. The young fish disperse into our freshwater sea, mirroring their life cycle on the Pacific Ocean.

Lake Erie has more urban area, more heavy industry, higher population densities and more agriculture than any other Great Lake. Yet, the biomass of Lake Erie vibrates with a frenetic energy. Lake Erie contains just 2 percent of the water for the entire Great Lakes system, and 50 percent of the fish—more than the other four lakes combined.

Young steelhead gorge on insects and baitfish in the open water. Anywhere from two to six years later, the fish return to the rivers where they were released, to try to spawn.

The state doesn’t stock the Cuyahoga. But to paraphrase the great steelhead elegist David James Duncan, when you fail to poison a creek quite to death, you can get visitors from distant realms.

The steelhead that swim up the Cuyahoga do so by choice. Or they are born to this water, as I was. 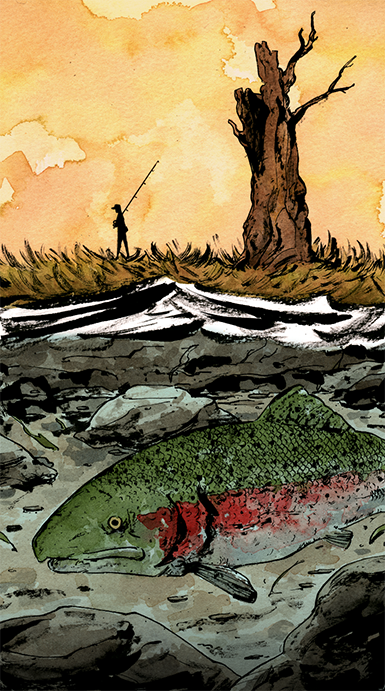 “The Magician.” Illustration by David Wilson.

You can see them in the spring, ragged animals near the end of their lives, paired up on the shallow gravel bars trying to spawn before they die or fall back to the lake.

The warm, silted Cuyahoga with its urban runoff and overflowing municipal sewage is not an ideal habitat for young salmonid eggs. But the feeder streams run cold and clear, and in some years the fish make it.

The Ohio EPA had documented natural reproduction of steelhead in seven tributaries of the Cuyahoga River.

The role of the Magician is to conjure something from nothing, to create meaning from happenstance. The winter is cold and terrible. The river smells like burnt plastic. There are not supposed to be any steelhead in this river. And so I stand in contradiction of all reason, waving my arms over the water.

On a bend in the river, the current quickens over a gravel bar. It spills over stones and broken cinder blocks, and flows into a deep pool against an eroded bank. Trees have fallen and drowned in the deep water creating a matrix of limbs, eddies, and shadows. It is a place to rest after climbing a rapid, to ambush baitfish, to flee predators.

I stand on the shallow side of the bend and cast across the river, skirting the deep pool and the tree limbs with a swimming offering—something pink and vulnerable, an undulating creature the size of my pinky finger, designed to entice or enrage any creature that sees it.

But there is too much current—the fly is ripping past the deepest part of the pool too quickly. I step into the gravel bar, cast again. The river sweeps the fly along and it hangs below the best part of the run. I continue to wade further into the current, to get a more parallel angle on the pool.

The river flows over my knees, pushing my body downstream. I can feel the sand and rocks slipping out from under my feet with each step, swept away in the current. If I fall, the water will fill my waders and my heavy boots, it will sweep me into the trees, and I might drown.

But the angle is perfect now, as I flip the fly into the pool, it swims and dangles in slow motion. The fish is right where it should be, and it grabs the hook and turns. The fish instantly feels the barb, and knows its mistake. It dives for the fast current, using the slab of its heavy body to pull against the line and it stretches and moves away.

As I pull it closer to me, it jumps clear of the water. It is an improbably large animal, tethered to me by a piece of string. The fish exhausts itself, fighting my arms and the current. I use the long rod to glide it onto the bank.

It is a massive animal. When I wrap my hand around the base of its tail, my fingers can’t touch. Its muscles hulk and spill over my palm when I hold its body out of the water. Its eyes roll, gills flare, and I let it down into the water again. I unpin the hook from the corner of its mouth, and let it nose back into the current.

For a moment it rests, then it is gone. One snap of that huge tail and it’s out of my hand.

It is as if it were never there.

From Rust Belt Arcana, out October 30, 2018 from Belt Publishing.

Matt Stansberry was born in Akron, Ohio and graduated from Kent State University. He writes about the intersection of natural history and myth. Matt spent six years in Oregon writing about wild trout and salmon and advocating for sustainable fisheries management. He currently lives in North Carolina with his wife and three sons. Find him on Twitter @LakeErieFlyFish.

David Wilson is an illustrator from Stow, Ohio who has worked for The Atlantic, New York Magazine, Harvard, The Boston Globe, and many more. He also produces independent comics and films. He currently lives in Ohio with his wife and two daughters. More of his work can be found at www.workdavidwork.com.