From Croatia to Cleveland to Columbus

On generational migration and identity in the Midwest, from Croatia to Columbus


According to family lore, my husband’s mother brought with her to the United States three plates, three spoons, one paring knife, and one pot. It was 1968 and she, her husband, and their four-year-old son spent a few months in an Austrian refugee camp before embarking on a one-way trip to Cleveland, Ohio. They settled there among fellow Croatian immigrants, welcomed a daughter weeks later, and began to make a life. They did not arrive in Cleveland randomly or without support. There was already an established Croatian Catholic church on the near east side that helped new immigrants find their footing, as well as family members and friends from the old country who helped them secure jobs and a car and provided childcare.

Decades later, the youngest son in that family and I moved our two daughters from Cleveland to Columbus, with a four-year layover in Connecticut. A moving truck delivered all of our belongings from one house to another, not repeating the painful separation of things from people that his parents faced. We have settled here nicely and have no plans to leave, but as the months have turned into years, I have a new appreciation of what it feels like to still understand your identity as being from somewhere else. Even as long as I live in Columbus—build friendships here, raise my children here, contribute to the economy here—I am still from Cleveland and of Cleveland. My Twitter profile proclaims that I “root for all things Cleveland.” My suburban minivan sports a CLE sticker paying homage to each of the city’s three professional athletic teams. When I talk about Cleveland, I still call it home. And yet, with each passing day, I recognize that I, too, live separated from that geographic identity, and am failing to transmit it to the next generation. 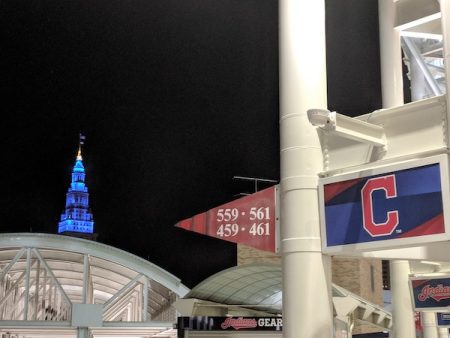 My husband’s family has already been through this process. They have been Croatian first and foremost, merely residing in this country but with heartstrings ever tugging back across the Atlantic. Here, Croatian flags hang in homes (and in the church), traditions are tightly held, and songs and dances from the homeland celebrate their dearest occasions. Their people recreated a mini-Croatia of their own in Northeast Ohio, and thus there were few demands on the degree to which the first generation assimilated over time.

However, as generations are apt to do, many children of these immigrants, now adults themselves, are flying farther from the Northeast Ohio village. They are charting their own paths, perhaps away from their aging parents, as they become more wholly American in language, ideology, culture, and experience. Born here, they cannot, as much as they try, really understand “being Croatian” the way their parents did. The parents watch this evolution with sadness and some level of disappointment, although they never intended to return themselves to the place they fled. With every wave of immigration in U.S. history, the degree to which the children of immigrants self-identify as being from the old country has faded through the years. We understand this process.

And yet, here it is, happening in my own life. My children will not view themselves as being from Cleveland. Their youth will not be spent at Squire’s Castle, Buttermilk Falls, or the West End YMCA. They will not grow up with Biagio’s donuts, Petti’s pizza, or Slyman’s reubens. No matter how often we pilgrimage to Progressive Field for an Indians game, or to the American-Croatian Lodge for a family wedding, they are not of that place. They are not of the Cleveland I know and love, and they are not of the Croatian version of Cleveland their ancestors created.

Like my husband’s Croatian relatives, those of us who move within or away from the Midwest also carry the legacy of our birthplaces to our new hometowns. Growing up in Cleveland, I gave no thought to the city of Columbus. Our eyes were cast eastward, so as to despise Pittsburgh, or westward, to gaze with slight insecurity at Chicago. But as I traveled through Columbus regularly on my way to Bloomington, Indiana, for college, I began to notice that the city had its own vibe. I watched new construction along our route: new highways, new buildings, new malls, new homes. Something was happening in that place.

As a newlywed, living in Cleveland, I wanted to see the ballet and discovered that Columbus had a performing company while Cleveland did not, so southbound we went one February weekend to check it out. Columbus was sunny and seventy to Cleveland’s cloudy and fifty-four, and we looked around and realized again that something was happening there. Standing near the Polaris mall, I looked to the horizon, trying to figure out where the people who shopped there lived.

Years later, trying to get back to Ohio from Connecticut, we scanned the economy in Cleveland and then in Columbus, remembering the hint of better weather and bustling communities. Cleveland’s economy struggled; it was clear that the industries we sought were not showing promise in Cleveland’s uneven recovery from its Rust Belt past. Cursory research into Columbus’s economy revealed thriving and growing sectors that held the potential for long careers. So, to Columbus we moved in 2016, feeling like we were dropped off incorrectly about two hours south. 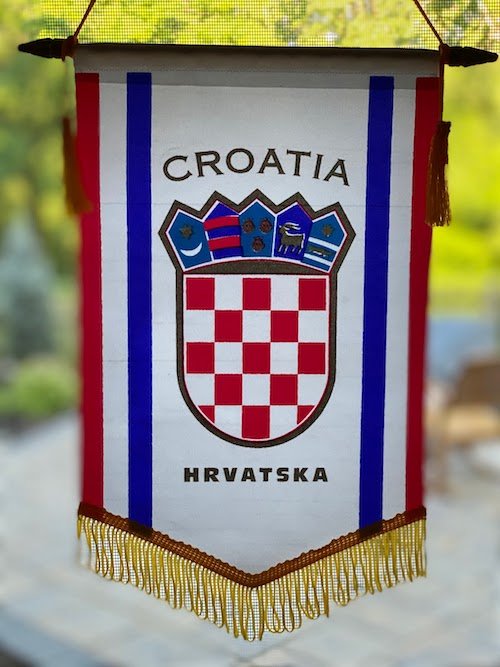 A Croatian flag hangs in the window of the author’s home. Photo courtesy Julie Mujic.

In Columbus, in my experience, everyone talks about where they came from. Any gathering of people eventually turns to place of origin. Many people are from Cleveland, Akron, Canton, or points between. Every Thanksgiving morning, I-71 northbound looks like the Indianapolis 500, everyone heading home for grandma’s turkey. Others arrive in the city from Appalachia, Cincinnati, or from outside of the state; infrequently does anyone claim Central Ohio as their birthplace, that rare person who has seen the changes to this place in the recent decades.

My years in Columbus so far have been mainly among these transplants, people who still claim somewhere else as the source of their identity. We are the migrants who now seek to extricate ourselves from poor economic options near home to give ourselves and our children a better life. Yes, our flight from Cleveland does not include the same aspects of the refugee experience of my in-laws, but upon visits we look around and are reminded that it is unlikely we will return. Columbus is young, vibrant, and building up. Companies are moving here. The airport is growing. We feel like we are a part of something positive, something alive, a part of the future.

Really, though, we are merely repeating history. We are a new story of migrants within and through the Midwestern part of this nation; now instead of people who arrived during the Cold War from communist nations, we are those who move around to find a place in this post-industrial region. The Midwest has served as a conduit for population movement for its entire history, and today is no different. Perhaps my children will leave this place someday and call a new city or country home. They will likely tell their children stories of time spent at Columbus Crew games, or eating Graeter’s ice cream, or feeding giraffes at the Columbus Zoo. And they may not realize how they perpetuate a cycle of looking back upon a place as forming their identity—their faces turned toward Columbus, as their mother looks to Cleveland, and their grandmother to her Croatian roots. Maybe part of being Midwestern, or American, is always also being from somewhere else.

You are Croatian, my mother-in-law reminds my husband. You are Croatian, too, she tells our daughters. Yes, we all nod, that is true. Meanwhile, I orient my family north, toward the lake, toward all things Cleveland, but they are rarely in that place they are taught to face. How, then, do children really understand this heritage when they grow up immersed in another place? My children cannot be Clevelanders any more than they can be Croatians.

So now that I understand better this cost of migration, I’m going to rethink my attachment to Cleveland. Or, at the very least, consider adding a Cbus sticker to the back of my minivan. ■

Julie Mujic is a Visiting Assistant Professor in the Global Commerce program at Denison University. She is currently revising a book manuscript for Fordham University Press called Why They Stayed: Higher Education, Midwestern Prosperity, and the American Civil War.