d.a. levy & the Anniversary of the Hough Riots

As the regional headlines mark the 50th anniversary of the Hough Riots, I recall a line in a poem by d.a. levy, observing the madness that erupted from July 18th to July 23rd on the  east side of Cleveland:

It is an image my mind has conjured during riots and subsequent lootings over the past few years — in Ferguson, in Baltimore — where the strange, seemingly unmovable biases and struggles of class warfare appear inseparable from the American landscape.

levy was born and raised in Cleveland, and he incorporated the Hough Riots in his poetry as he incorporated every aspect of Cleveland during the mid-to-late 60s.  His self-described artistic mission was to give the city its own singular breed of poetry, regardless of whether the city was indifferent or openly hostile to such a notion.  Ultimately, the latter proved to be the case. 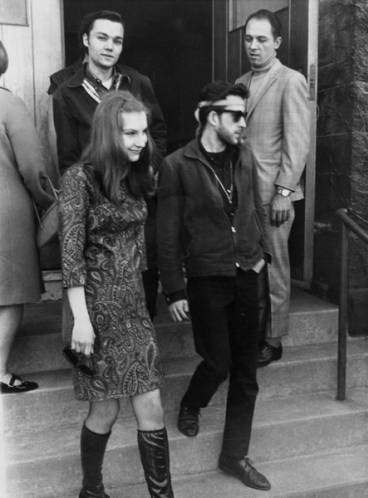 levy was arrested and charged with five counts of contributing to the delinquency of minors during a public reading of his work.  He also faced charges for publishing and dispersing obscene literature after a secret indictment by the Cuyahoga Grand Jury.  James Lowell, owner of the Asphodel Bookshop, where levy’s mimeographed literary journals were sold, was also arrested on charges of obscenity.

This is 1967, eight years after the landmark Supreme Court Case lifted the ban on Tropic of Cancer, Lady Chatterley’s Lover and Fanny Hill. This is 1967 in Cleveland, only months after a devastating riot involving national guardsmen, arsonists, assassination and civil decay.  This is 1967 in Cleveland, where Carl B. Stokes was the first African-American mayor elected to a major city; where the first successful coronary artery bypass operation was performed at Cleveland Clinic; where prosecuting a 24 year-old man for writing poems that reflected the speech of ordinary people was of the highest priority for public safety.

As Larry Smith details in the book, d.a. levy & the mimeograph revolution, levy described his occupation as a poet who sells poetry “for 89 cents a day,” to which Judge Frank Celebrezze responded, “maybe you should charge more than 89 cents,” setting his bail at $2,500.   The cafes where levy and other Cleveland poets read were raided and shut down.  High schoolers were interrogated, their lockers searched; they were asked if levy was distributing narcotics along with hisprofane poetry.  levy’s work materials were also confiscated as evidence and never returned.  A defense fund was established, and though Allen Ginsberg and nearly 200 others gathered on his behalf, the Cleveland police put them all against a wall at gunpoint despite the absence of any legal basis.

In July of the following year, only a few days shy of the Hough Riots’ first anniversary, the Glenville Riots would occur, triggering another intervention by the National Guard, more violence, more deaths.  levy would observe this as well.  The riots in Hough and Glenville would inspire the opening scene of his epic piece, “Suburban Monastery Death Poem” in 1968:

ten blocks away
it was real
thousands of tourists
arrived.”

levy had attempted to galvanize the artists of Cleveland, to give identity to a place people were routinely leaving for other, more desirable cities. Instead, he was hunted, persecuted; rejected summarily from a place he refused to leave, at least in any physical sense.  He would write:

In 1968, at age 26, levy committed suicide. Despite a poster of his face above the stairwell of Mac’s Backs-Books in Coventry, levy remains an elusive, under-anthologized and overlooked poet, in Northeast Ohio and abroad.  There have been no efforts to collect his works under any major imprint.  levy did not believe in copyright, so theoretically, a publisher could reprint the whole of his work with no need for contracts, residuals, compensation. But levy’s observations remain as virile as ever – the warring forces of political unrest, systemic bigotry and violence as a spectator sport reflect present-day America as much as they did Cleveland in the 60s.