The Death of a Detroit Cabbie

Amongst other things, I work as a restaurant consultant. The other day I walked into the kitchen of a client and I was seized by a memory of Cal, even though I haven’t seen him in almost eight years. A hot stove with a bubbling pot can do that to you.

It was early 2007, We were living in midtown Detroit in a neighborhood close to the Jesuit university where I was teaching. We shared a duplex. I remember coming down from my apartment to fetch the paper and I had to walk right past Cal’s door at the bottom of the stairs. The door was always open in the morning. He probably had just come home from driving his cab or a dawn game of hockey. The kitchen was right there by the door. Cal would be at the stove, stripped to waist, doing his voodoo to a cast-iron skillet brimming with some sort of curried tofu mess that must have became a staple of his diet back when he was a hippie. Fucker had to be over sixty but save for his face, which looked pretty battered, he was a whip of vigor. He played hockey year-round, a remnant of his youth before he cast his lot with all the crazies, commies and seekers on Plum Street in the Cass Corridor. 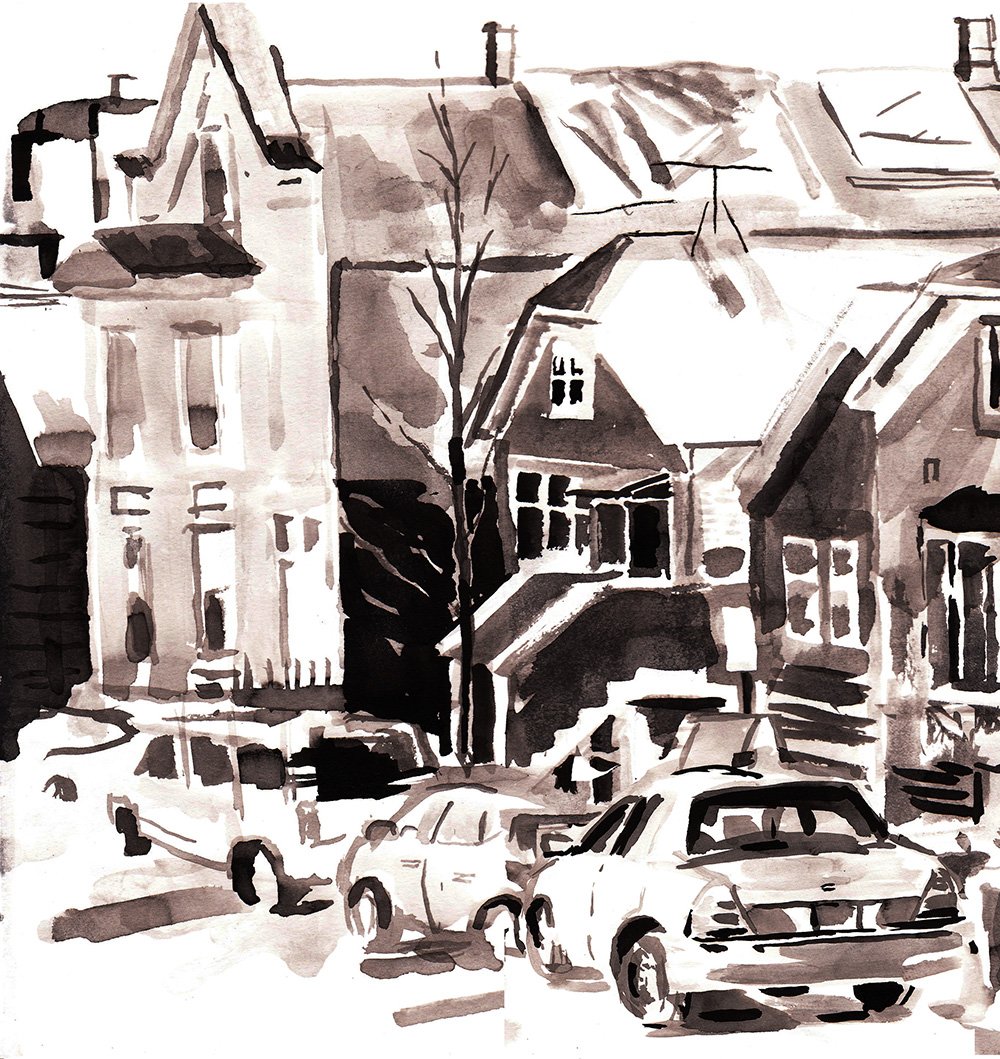 The paper was never on the stoop because Cal snatched it first. “Hey, man, I got the paper for you,” he’d say in that daffy sing-song way of his. “I’ve had enough of the Times.” I’m sure he had, because Fox News was blaring on the telly. Those were the dying days of Bush II, after the scales had finally fallen from the eyes of a heartland panicked enough to give the callow dauphin and his crooked braintrust a second term. Cal delighted in the furious spin of conservative pundits and the delicious irony of their discomfort.

I had no business living over Cal. I was supposed to be a family man, living out in the leafy suburbs of Detroit with my beautiful Amer-Indian wife and our tot. But I discovered that I could not play house if other people were in the house. My wife said she wanted a divorce. Perhaps she said it as a shock therapy gambit. The escape hatch was ajar. I moved out the next day. A colleague at the university knew a dodgy landlord who owned a place nearby, and I was quickly installed over Cal.

I had no furniture save for an air mattress and a space heater to counter the hole in the roof and the thin stained glass windows. When Cal saw this, he insisted that I take a spare chesterfield from his place. We manoeuvered the thing up the vertiginous stairs and into my the massive front room of my apartment. “Don’t shove off, my son,” I said. “Moving is thirsty work.” I invited him to polish off a bottle of grappa that I had bought in Canada. He envied me that. Not the grappa but the fact that I was a Canadian and could slip across the border when I wanted. Through the years, he had racked up a small rap sheet and Canada was not keen to let him in, even for a breather. He was an American animal, trapped in American life. Detroit was the wilderness he chose to stalk out that sentence. Although I enjoyed his company, he made me ashamed at both my good fortune and my lack of bona fides. The truth was in hiding in plain sight: I was a dilettante. All my youthful peregrinations in Detroit—the barfly posturing, the warehouse raves, the early-morning blind pig card games with lines of coke cut with the cards —were nothing more than a tourist’s amusements.

I had never met a relic of the revolution like Cal before. When his generation failed to paint it black, he didn’t retreat to a commune in Vermont or go into advertising. He stayed in the trenches of Detroit and hustled, ending up behind the wheel of a cab that he drove through the underworld of rack and ruin at the nadir of Detroit’s collapse. Travis Bickle he was not. Cal was fearless with no attendant loathing. Or pity. He took all fares to all destinations. He knew the city inside and out. Nothing was off-limits or unexpected.

He came from one of those small towns up in The Thumb that are now the domain of the Tea Party. He probably could have gone back there after the Summer of Love stalled out and Nixon won a second term. But he didn’t. Three months after I moved out, I discovered why. His son, a love child sired in that long-ago hippie dream, was in some sort of custody fight over Cal’s granddaughter. To leverage their advantage, the other side accused Cal of unsavoury improprieties. Were they true? I didn’t want to believe it. To my ears, the whole thing sounded like white trash nonsense from Honey Boo-Boo oblivion reaching out to take a good man down in his sanctuary city.

And take him down it did. He probably had been laying out in the backyard for a couple of days when the cable installer saw his body. Cal had blown his head off with a rifle but not before creating an immaculate shrine of photos and trophies on his dining room table dedicated to a life as a hockey player, a father, and a Detroit stray cat.

They say Detroit is coming back but as Bob Dylan put it, you can’t come back all the way. Cal is gone for good, and he took his history with him, a history of hard-luck perseverance and, no doubt, questionable moves, a history that could easily slide into myth were it not for the bittersweet smell from the pot.

Timothy Dugdale is a veteran copywriter and brand manager. He publishes fiction and records electronic music under the pseudonym Stirling Noh.