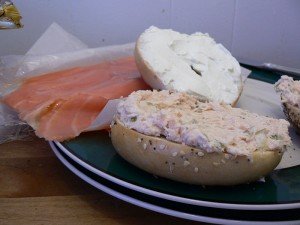 My father, Toby, was a “deli Jew.” That’s usually a putdown in the Jewish community, meaning my father knew more about corned beef than the Torah. Toby’s favorite food was a “good piece of rye bread.”

[blocktext align=”right”]My father, Toby, was a “deli Jew.”[/blocktext]My dad probably drank no more than 100 real beers in his whole life. He should have! In his retirement, when he drank he smiled a lot more. A bit shiker at one party, Toby teed off on a watermelon fruit bowl with a golf club. That stuck with me. (Shiker means drunk.)

I grew up on chocolate phosphates. The drink is carbonated soda-fountain water with chocolate syrup. I drank many of mine at Solomon’s in the Cedar-Center shopping strip in South Euclid, where Solomon’s moved in the 1950s.

For some Semitic semantic reason, gentiles occasionally called Cedar Center the Gaza Strip. The north side of Cedar Center became that. A couple years ago it was concrete chunks and gravel heaps, until a real estate developer knocked down the 1950s-era plaza and put up a Bob Evans and other national chains.

Bob Evans is good, but not a deli.

[blocktext align=”left”]My dad grew up in a deli on Kinsman Road.[/blocktext]At the Gaza Strip in South Euclid, there was also Corky & Lenny’s. (Still around—four miles east.) A couple of small Jews hung out in the rear booth at Corky’s. One was Bobby. (“Bobby” is a pseudonym. He’s still around.) Bobby did collections for a major landlord. Major, to me, means more than 1,000 units. I knew Bobby from junior high.

Bobby sued my mother. My mother, for health reasons, had moved from her Beachwood apartment after 27 years into an assisted living facility. She had a couple months left on her lease. Bobby, who represented the major landlord, went after her. Bobby’s boss, by the way, loved my band. So what. My mother was collectable.

In 2010, journalist David Sax wrote a book, Save the Deli, about the decline of the deli. Here’s something for the next edition: Delis went downhill when they added TVs. Now you have to watch the Browns (or Indians) while you eat.

[blocktext align=”right”]I’m deli-famous.[/blocktext]I’m deli-famous. I had a thank-you note up in the entrance of Jack’s Deli on Green Road in Beachwood for years. My letter was about the terrific tray Jack’s prepared for my son’s bris. Fatherhood was about buying huge quantities of smoked fish. What a blast I had. I complimented Jack’s on their fish, which my Aunt Bernice the Maven approved of. I mentioned “The Maven’s seal of approval” in my letter, which, like I said, made it into Jack’s front window. Bernice worked for a food broker and knew food.

Jack’s or Corky & Lenny’s? That’s the question, although I’m not sure anybody is asking it these days. (No, Slyman’s Deli is not an option. That’s too far afield.)

Cops ate well at Seiger’s on Kinsman. Nobody ever got a ticket for an expired meter, and sometimes cars were parked two lanes deep on the street, the old cops said. Itchie Seiger, my great uncle, had been the restaurant’s owner/maitre d’/kibitzer (glad-handler), and was a former cloak maker from Galicia, Austria-Hungary.

I personally didn’t see Itchie very often. My parents didn’t consider a drive from our house in South Euclid down Kinsman the right direction for a Sunday cruise. We usually wound up at the Chagrin Metroparks out east.

[blocktext align=”right”]We drank chocolate phosphates to drown our sorrows.[/blocktext]My great-aunt Lil Seiger supposedly gave her recipe for mish mosh soup to Corky’s. All the deli owners knew each other. I feel connected to Corky & Lenny’s because of that soup recipe. In fact the oddest shiva (mourning) I attended was at Corky’s, April 1968. It was for a high school friend who was rejected by every single college he applied to. We—the kid’s friends—sat in a corner booth and drank chocolate phosphates to drown our sorrows. We were all in somewhere, but our friend was out everywhere. Our guy had applied to six Ivy League schools and was turned down by all of them. He didn’t have a single back-up school. (He got into Ohio State on a “Hail Mary”—a late app.)

I can’t cut it in the deli life—the corned beef—anymore.Hummus is my go-to. I’m big at Tommy’s on Coventry and have been for a long time. I’m just not the deli Jew my dad was. I gave up on salami years ago. I write about delis. That, and the occasional quaffing of a chocolate phosphate. That’s the best I can do. Slurp. ::