The Disappearance of the Ruffed Grouse

The bird’s population is declining in states across the region. Forest management practices are mostly to blame.


Every spring, my two brothers and I listen in the forest for the drumming of the ruffed grouse. We manage a hunting property, in Michigan’s Lower Peninsula, where you can experience it firsthand. The male bird climbs up on a log and beats his wings to attract a mate, making a pounding sound you feel as much as hear, like someone is thumping out a slow-building buzz roll on your chest. It’s the sound of spring—and of a healthy forest ecosystem.

But in many places across the region, that drumming has grown fainter. The latest evidence came in November, when Indiana’s Department of Natural Resources announced it was listing the ruffed grouse as endangered. In the 1980s, Indiana had so many grouse that it could export them for restoration projects in other states. Steve Backs, a biologist with the Indiana DNR, who has studied grouse for more than forty years, conducted a bird census in 1983 and found grouse in more Indiana counties than at any time since 1856. But biologists haven’t heard even a single drummer there for six years. The grouse went from thriving to endangered in three decades.

In the world of forestry, there is a difference between disturbance and development.

The trajectory of this decline is shockingly easy to track. In the early 1980s, public pressure mounted to save forests. State and national forestry managers pretty much stopped logging of the giant Hoosier National Forest, in the south of the state. An anemic local pulpwood market also reduced the incentive for most private landowners to cut their trees. Bird numbers crashed. “Our populations pretty much deep-six toward the later part of the eighties,” Backs told me. “And they’ve never recovered. And it’s been a continual decline as our forests have advanced and matured towards more climax type of forests.”

In his 2000 book, Restoring America’s Birds, ornithologist Robert Askins titled one chapter: “Another Quiet Decline: Birds of the Eastern Thickets.” Thickets are temporary places, transitional habitats that move around. If humans are going to force forests to stay in one place, they’re also going to have to emulate the work of storms and beavers. Those birds are quietly declining because thickets have fallen out of fashion.

Some variation on this story has been playing out in states across the region. The grouse is nearly gone from Illinois, Iowa, Missouri, Western Kentucky, and some of its range in Appalachia. It’s dwindling fast in Ohio. The ruffed grouse is now listed as a species of concern in eighteen states. Ben Jones, president of the seventeen thousand-member Ruffed Grouse Society, said that the collapse in Indiana was a “wake-up call.” “We really believe that ruffed grouse are a bellwether to forest health,” he said.

At the center of this phenomenon is a non-interventionist approach to forest management. “The perception is that if you want wildlife, you want nature, you need to preserve the trees,” Backs said. “People don’t understand that vegetative disturbance is probably the prime operator as far as providing species richness, and diversity of habitats.” 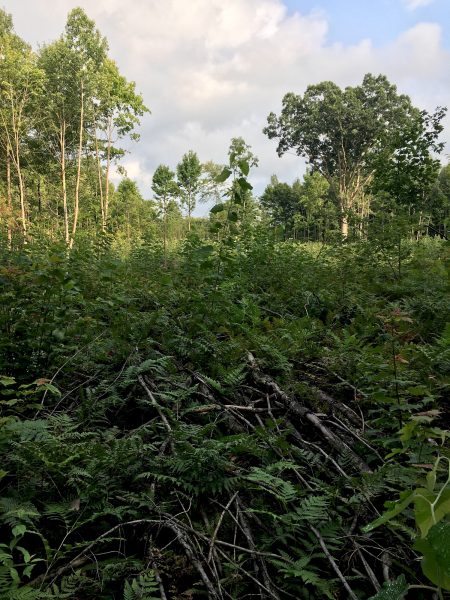 Cleared land on the author’s property in 2018. The young growth provides an ideal habitat for grouse. Photo courtesy Dean Kuipers.

In the world of forestry, there is a difference between disturbance and development. Cutting a forest to pave it over for a strip-mall kills everything. But cutting limited sections of forest and letting them grow back is a way to emulate natural disturbance like tornados and floods, which is how a forest renews itself and the animals in it.

The ruffed grouse, Bonasa umbellus, is a creature born of disturbance. This fast-flying bird, about one-third the size of a chicken, once fed Native Americans and European settlers, thriving in patches of forest where mature trees came down and sun-loving, early successional species, like aspen and birch, shot up to provide dense thickets for cover. The birds feed on the buds of young saplings, the berries of spicebush and viburnums and dogwoods that move into the open spaces, and the fungi that grow on the downed wood. Grouse don’t migrate, so this food carries them through the winter.

The story of the grouse is, is in many ways, the story of America’s eastern forests. Settlers coming to the U.S., beginning in the 1600s, found the land east of the Mississippi—more than four hundred million acres of it—mostly forested, and then cleared off about half of that land for timber, mining, fossil fuel extraction, and agriculture. After 1920, however, lots of agricultural lands and suburbs were left to revert to trees, and, over the next fifty years, the mostly privately-held forests of the East grew back to a significant extent. That regrowth, and a robust hardwood timber industry, gave rise to a lot of wildlife.

And then the cutting stopped. The environmental movement, beginning in the 1970s, inspired Americans to save trees. Conservation groups hammered at federal and state agencies with lawsuits challenging public timber sales. I covered a lot of those fights as a reporter in the West, and the claims against logging were many: logging put roads into roadless wilderness, opening it to development; silted rivers; killed endangered species; sometimes wildly overcut; often skirted environmental review. Those agencies eventually pulled back on logging, especially in the East. At the same time, fire suppression campaigns effectively curtailed wildfires in the typically wetter forests of the East.

Those changes were necessary to avoid mismanagement of our public forests, but they put us in a new bind. In the eyes of experts I talked to, the pendulum swung too far in the opposite direction, negatively affecting the health of forest ecosystems. Wildlife dependent on dynamic forests started to disappear. Lack of fire caused the forests of the southeast to lose half their wildlife species. The wild turkeys that are suddenly everywhere in the East are beautiful, but indicative of the problem: they thrive on acorns from mature oaks, and studies by biologist William McShea and others have shown that mature oaks are increasing, and sapling or pole stands are decreasing.

Maybe we’ve all forgotten how quickly the forest grows back.

It’s not just grouse that need the latter habitat. So do American woodcock and whip-poor-wills, which are in steep decline, and dozens of songbirds, including warblers, chats, and towhees. Studies in the northern U.S. show that bears, beaver, rabbits and snowshoe hares, white-tailed deer, and moose also depend on young, sapling forests.

“A lot of it comes down to: what do we want?” said Richard Kobe, chair of the Department of Forestry at Michigan State University. “What kind of natural world do we want? Because we’re going to be influencing it whether we are harvesting trees or not. Everything’s been disturbed at some point, even old growth forest. And if grouse are something that we want to conserve—and I think that we do—then the way you do it is by having younger stands of forest in the landscape, and you can do that by harvesting.”

In 2003, my brothers and I cut about seven acres of aspens and plantation pines on our property, and allowed them to naturally reseed to a mixed, early successional forest. It looked like hell, but only for a year or two, and then it teemed with life. Birds were suddenly everywhere, and we have more deer than we know what do with. We cut an additional fourteen acres in 2017, in a different part of the forest, and we got the neighbors involved, too, to create sections of forest of varying ages. This kind of management is not uncommon in Great Lakes states, which have created large deer and grouse populations by managing aspens. Michigan, Wisconsin and Minnesota also have healthy pulpwood industries, so a little logging can pay the property taxes. 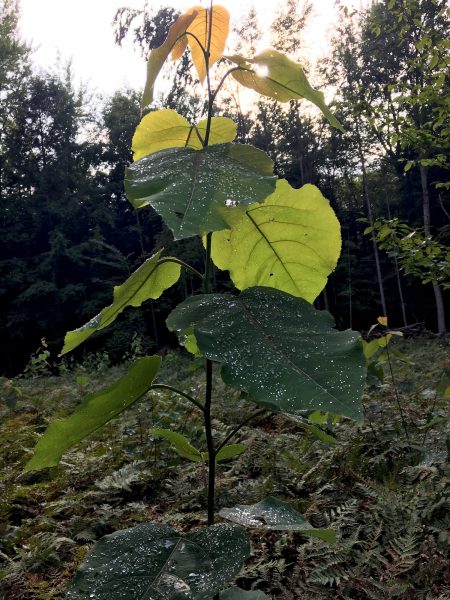 When I told my brother Brett about the endangered listing, his reaction, like mine, was to double down. “It just makes me want to create more habitat,” he said. “I think about the grouse all the time. It’s very emotional, when I’m digging up some arrowwood or high-bush cranberries or crab apples to plant at the cabin, or when I’m daydreaming about knocking down more Scots pines. We see the biggest benefit in the deer population, but in my mind, it’s all for the grouse and woodcock.”

Jeremy Turner is a professional forester with Meadowsend Timberlands Ltd., managing forty thousand acres of private woodlands in New Hampshire, Vermont and Maine. When he proposed felling some timber on Audubon Society property, the members were hesitant, but when small cuts raised their bird counts, they wanted more. Now, he sees this kind of education as part of his role—to help people understand how forests work. “The world we’re in now, most disturbances in the forests are anthropogenic,” he explained. “We kinda need to be creative with those disturbances and channel them or make systems which have trees and birds and animals alike, and adapt them creatively,” he said.

If Indiana’s endangered listing cracks open a door to more logging, it would be the first time in a generation that people would actually see the link between disturbances and bird populations. “People have to see it,” said Backs. “We went twenty-five to almost thirty years without a commercial hardwood timber sale on the Hoosier National Forest. Now they’re trying, a little piecemeal here and there. It’s like a day late, dollar short.”

Maybe we’ve all forgotten how quickly the forest grows back. The cuts that my family made fifteen years ago are now a thick forest, twenty-five feet tall and loud with birds. “From an ecological standpoint,” Backs told me, “I would say throughout the Eastern United States, with the amount of rainfall, and the length of the growing season, and the quality of the soils, especially in the central hardwoods region, these are the most resilient forests in the world.” ■

Dean Kuipers writes about the environment, politics and the arts. He is the author, most recently, of a forthcoming memoir, The Deer Camp.

Cover image of a ruffed grouse in a tree by Ethan Gosnell/Flickr (CC BY-SA 2.0).