When I was in high school, a teacher once asked my class to use a word or term to describe the United States. A classmate of mine said it was “a meritocracy.” The teacher, who wasn’t the sharpest knife in the drawer, wrote “Ameritocracy” on the chalkboard.

It was pretty funny — because words are hard — but it gets to a larger issue, albeit purely by chance. For most people, the US is so closely synonymous to meritocracy that they might as well be the same word. America is the land of opportunity; the American Dream claims that if you work hard and play by the rules, you can succeed and make a better life for your children.

One of the key vehicles by which to achieve the American Dream is home ownership. It’s the way most people set down roots and accumulate wealth. But what happens if the system we have developed to promote the vehicle (home ownership) undermines the goal itself?

The haves and the have nots

Inequality is the defining issue of our contemporary world. Over the past few decades, economic growth has been distributed in a highly uneven manner, increasingly becoming concentrated in the hands of a small group of superrich, while median wages stagnate and poverty concentrates.

[blocktext align=”left”]Inequality is the
defining issue of our contemporary world.[/blocktext]According to a recent Oxfam study, the wealthiest 62 people in the world hold as much combined wealth as the bottom 3.5 billion. While there are methodological issues with this report, it does highlight the way in which the gap between the rich and the rest has only gotten worse since the end of the Great Recession.

This issue has filtered into the zeitgeist. Thomas Piketty’s book was a bestseller. Inequality has been the ethos driving Bernie Sanders’ underdog bid for the Democratic nomination, which has in turn pushed Hillary Clinton to focus on the issue. It has even been a key factor in the GOP race, as Donald Trump taps into the fact that older white men feel increasingly dislocated by rapid social and economic changes that threaten their traditional stranglehold on power.

Many Americans believe that a certain level of inequality is both inevitable and, perhaps, even valuable in our society — there will inevitably be winners and losers in a meritocracy. But the question now is whether the system we have constructed has grown so balkanized that it throws the central premise of the American Dream — upward mobility — into doubt.

Various observers and researchers have drawn links between this decline in social mobility and a number of different variables. These include regressive tax policies, discriminatory housing practices, residential segregation, uneven school funding and quality, and the effects of mass incarceration. But relatively few studies have explored whether our push to realize the American dream — namely, the development of our automobile-centric, suburban development patterns — has contributed to this trend. 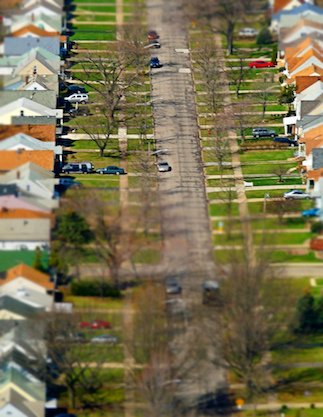 A new study in the journal Landscape and Urban Planning by Reid Ewing and colleagues takes on this question. The central question of the study (coincidentally also its title) is: Does urban sprawl hold down urban mobility?

The authors note that previous studies from Raj Chetty and colleagues attempted to make this connection, finding that “upward mobility is higher in cities with less sprawl, as measured by commute times to work.” Unfortunately, commute time is not a sufficient proxy for sprawl, as some of the most compact cities — such as New York City and Washington, DC — require soul-crushing commutes. Cities with high levels of transit use also tend to have longer commutes, as it simply takes more time to get to work if you have to switch trains or buses.

Instead of using commute time as their dependent variable, Ewing and his colleagues rely on the urban sprawl index that he initially developed in 2003 and updated in 2014. This index provides an aggregate measure of a city’s compactness/sprawl based upon four factors: development density, land use mix, activity centering, and street connectivity. The score is normalized, so that the mean level of compactness is 100. Cities that are more compact have scores higher than 100, while sprawling cities have scores below 100.

In order to examine the relationship between sprawl and social mobility, Ewing and his coauthors explore both the direct relationship between these two variables, but they also introduce three mediating variables to see if there is an indirect effect. These variables, which each represent potential pathways linking sprawl with social mobility are social capital, racial segregation, and income segregation.

Through their modeling, the authors concluded that, while social capital does not affect upward mobility, both income and racial segregation have significantly negative impacts on one’s ability to lift him/herself up by his/her bootstraps.

But the direct effect of sprawl on upward mobility was striking. If a city was to become twice as compact (e.g. move from a score of 60 to a score of 120 on the index), the odds that a child born in the bottom quintile of income would reach the top quintile by age 30 would increase by 41%.

Moreover, the issue has only gotten worse in recent years. I previously wrote about a study that explored changes in the sprawl index for U.S. urban areas from 2000 to 2010. According to that study (paywalled) Cleveland became 13.3% more spread out over the past decade, more than all but nine other cities. Apply the elasticity that Ewing and colleagues find in their study, and this increase in sprawl means that the odds of a poor child in Cleveland climbing the social ladder decreased by 5.5% from 2000-2010.

[blocktext align=”right”]…every time we add a new, cookie-cutter housing development in the exurbs, we consign more poor children to a life of destitution, illness, and despair.[/blocktext]This outcome is disturbing. As it is, an astonishing 58% of Cleveland children live in poverty. Our development patterns have undeniably increased this percentage, and they have made poor children’s lives even more difficult. By some measures, we live in the single most segregated city in this country, and our transportation and housing decisions have only exacerbated this trend.

The implications of this study are enormous. It means that every time we add a new, cookie-cutter housing development in the exurbs, we consign more poor children to a life of destitution, illness, and despair.

Clearly, planning matters. If people want to move to a new house on the fringes of the exurbs, that’s their right. But we don’t have to subsidize their move by building a new freeway interchange or sewer line. Because, at a certain point, our choices are no longer about whether we, as a region, will continue to lose population and businesses. It becomes about whether or not we want to lose our soul.

___
Tim Kovach is an independent analyst and blogger from Cleveland who researches and writes about climate change, disaster risk reduction, and transportation at timkovach.com. His work has appeared on Grist, Vox, and Scientific American.