An Elegy for John Prine

“If you listen long enough, you’ll find your own Prine line, the one that makes you feel real lonesome and want to laugh, all at once.”


The first time I heard John Prine, he was singing about an “Illegal Smile.” It was the first track on his self-titled debut, released in 1971, and I was late to the joke by about forty years. I was a real-sure teenager then, learning guitar from a mortician, and I remember knowing that I’d never heard a song like that before. I still haven’t.

“Illegal Smile” introduced a record that has become a lodestone for Prine fans, always spoken about in hushed tones, as though we’ve all been selfishly trying to keep its greatness to ourselves. All the foundations of Prine’s art are in there: people cornered by the usual suspects of love, age, war, work, and time itself. U.S. Poet Laureate and fellow Midwesterner Ted Kooser said that Prine  “did a better job of holding up the mirror of art to the ‘60s and ‘70s than any of our official literary poets.”

If there has ever been someone qualified to hold up that mirror to America, then it was surely John Prine. For most of his formative years, Prine was dressed in distinctly American uniforms. First, of the United States Army. He was drafted and sent to boot camp at Fort Polk, Louisiana, and while many of his friends were sent to Vietnam, Prine was sent to Germany to work as a mechanic.

Much of his art can be seen through the lens of this placement: how an act of chance can alter a life. In his case, he ended up working daily for two years to fix up the broken parts of the United States Army. Then he came home when many of his contemporaries didn’t, only to wear another uniform: the service blue of the United States Postal Service.

There’s a rhythm to some of the songs on that first record that could only have come from hours along the mail route, a vocal delivery honed on the sidewalks of Chicago suburbs. Its lyrics were about the people the mail was addressed to. I think he always kept that perspective in mind, even decades after he’d hung up his mail bag: delivering dispatches from America back to itself, even when the contents were not exactly welcome. Who else, on their debut, self-titled record, would have the grit to record not one, but two anti-war tunes during the absolute heart of the Vietnam War? America is a vicious, vain thing. It is also shy. John Prine knew that. 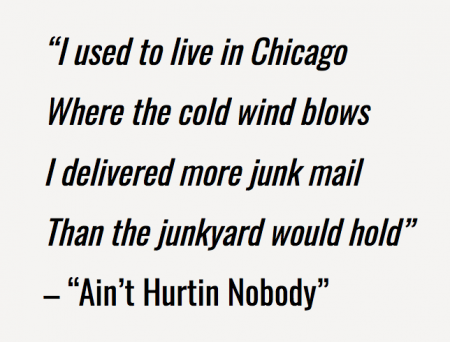 I place John Prine among the most important Midwestern short fiction writers of the last half century. It’s impossible to hear “Sabu Visits the Twin Cities Alone,” “Jesus The Missing Years,” or “Lake Marie” (Bob Dylan’s favorite Prine song) and consider him to be working only under the title of “songwriter.” There is a deep, classically Midwestern ethos in his work, a hardworking sympathy mixed with thumbtack humor that’s traceable all the way back to Willa Cather, Sherwood Anderson, George Ade, even Mark Twain.

His pinnacle works open the door to those uncomfortable products of American society, which he saw, and to which we’ve often been numb. Songs like “The Great Compromise,” about growing disillusionment with post-war America, and “Come Back to Us Barbara Lewis Hare Krishna Beauregard,” about the withering of the hippie dream into the Cerberus of drugs, religion, and capitalism. Two of his very best have come in the last twenty-five years, including “Quit Hollerin’ At Me” and “Some Humans Ain’t Human”: “Some humans ain’t human/Some humans ain’t kind/You open up their hearts/And here’s what you’ll find/A few frozen pizzas/Some ice cubes with hair/A broken Popsicle/You don’t want to go there…”

Sometimes, his aim was so true, it goddamn hurts.

Prine grew up outside of Chicago in Maywood, Illinois. I grew up in Illinois, too, a few decades later and a few hours south. In the ‘90s, when the Peabody Coal Company that had once buried Prine’s father’s hometown finally closed its mine in Central Illinois, my grandfather bought the building to put farm equipment in. Today, my brother parks some of the same equipment in there. For me, “Paradise” looks like a concrete slab I played on as a kid, poured on top of the largest mine ever dug in the heart of Illinois.

I’ve acted out plenty of Prine scenes, and you probably have too. Here’s one: a few years ago, it was Christmas time in Illinois again, and my mother was sticking dried-up clove sticks into oranges sold for the school band fundraiser. I was free, for once, from the second shift in the capital city night. I was making her proud again, holed up with a bottle of sake and a going-away-gift guitar. I was butchering most of Prine’s Bruised Orange, somewhere near the key of G. Through the window, it was sleeting, which they call spitting back home. John and me both said: “It won’t do you no good to get angry/So help me I know…” So I just stared out the window and tried to figure out the tune and the correct amount of time to microwave sake. Sort of like my screaming and strumming, it never came out right.

If you listen long enough, you’ll find your own Prine line, the one that makes you feel real lonesome and want to laugh, all at once. He has a way of making you feel like you are the only one who’s ever heard of him, like he’s written his songs just for you: to fall in love to, drink to, mourn to, and drive the interstates and walk the sidewalks to. In my experience, people never grow out of John Prine songs. They grow along with us. They follow us around. We pack them up with our keepsakes, move them between houses, and pass them along to our children to take care of. We know the characters in Prine’s songs so intimately because often, we have known them or been them. 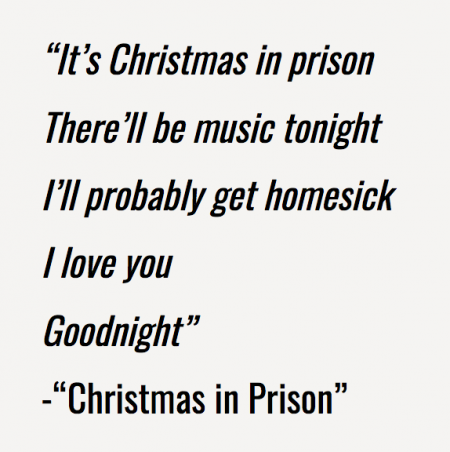 I was at work late Tuesday night when I learned that Prine had died of complications from COVID-19. I walked out into a spring thunderstorm, our first of the year, and remembered I had left clothes out on the line. A pink moon was hanging up there somewhere behind all that mess, promising something like renewal, though it was pretty hard to believe in it. I kept hearing the chorus of a song by Prine’s best friend Steve Goodman, “The City of New Orleans”: “Good Morning, America, how are you?/Don’t you know me? I’m your native son…”

With John Prine gone, we’ve lost one of America’s true native sons, at a time when it feels like we could use his voice the most. What we’re left with is a body of American music that to its very core, in verse after verse, decade after decade, aimed to remind us of this one fundamental thing: that more often than we’d like to admit, we all feel exactly the same way.

Do me a favor, if you can: put the flag up on your mailbox and send something out for him this week: a thought, a prayer, a few lines, a heart shaped like a Valentine. Any old thing. Whatever fits. Then put on The Missing Years at as loud as the neighborhood dog can stand. Someone or something will be by soon enough to pick all this up and carry it on down the street.

Sara Williams is an artist currently living in Iowa. She spends all of her free time happily distracted by the state’s waterways, timbers, farms and fields. To see more of her artwork, visit http://tenacioustimbers.com/.