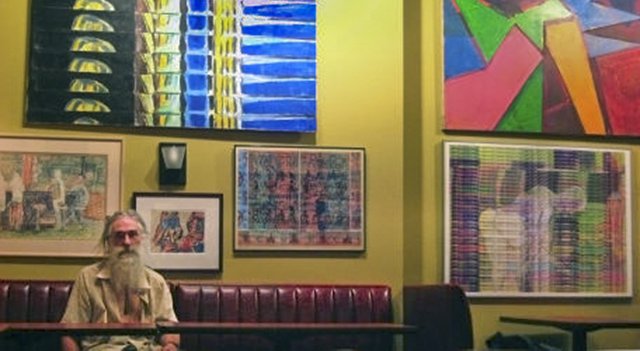 I learned later that his real name was Robert E. Wood. When I came to know him, people were calling him F.U. Bob. During the ‘80s, Bob was quite the fixture on Main Street in downtown Kent, Ohio—the same city where the May 4, 1970, shooting happened. He would walk for miles collecting discarded bottles and cans from one end of town to the other well before recycling was in vogue, addressing obnoxious car travelers with utter vehemence by reaching his right middle finger high in the air and bellowing his mellifluous “Yoooooouuuuu!” Apparently, the finger itself represented a quasi-verbal act, so there was no need to actually utter the F-bomb; those who taunted Bob often claimed he barked the entire two syllables. I never heard it.

People can be cruel, especially the college crowd. Students would find time in their busy schedules to hunt out and chide Bob as they meandered throughout Kent just to honk and toss beer cans, cigarettes, garbage wrappers, and other items to prompt his proclamation. Once a carload of young people veered onto the sidewalk, causing Bob to dive out of the way to save himself. Without skipping a beat, he hobbled up and shouted his mantra while flying the bird. This was quite a feat to behold.

Though Bob was viewed as obscene, in fact, he was caring and gentle with anyone wishing to befriend him. The obscenity was his modus operandi while in public; in private he was refined and brilliant. Bob graduated from Kent State University with a master’s degree in painting. F.U. Bob was simply an artist, an award-winning one, too. He had remarked, “You never know who’s watching you when you step outside your side door; people judge you for all the wrong reasons.” I came to believe this without a second doubt. People certainly misjudged him at first glance and concluded he was just one freaky-ass Vietnam vet who couldn’t function in society. Boy, were they ever wrong.

I witnessed the near accident on my way into Susan’s Coffee and Tea on Main Street. As the car sped away, I trotted over to Bob and asked if he was all right. Taking in his disheveled graying beard, tattered camouflage Army surplus coat, and the exquisite smell of Bay Rum, I was almost scared off by his hypnagogic state.

“Fools, crazy-ass fools,” was all he said as he hobbled in semicircles. I encouraged him to take a rest inside the coffee bar and maybe get a drink.

At that time, I wasn’t very forthright. But an inner voice had prodded me forward. People can change you know, hopefully for the better. And surprisingly, the few gawking patrons inside Susan’s that afternoon had ringside seats. They greeted Bob, paying no attention to me, offering him a place at their table.

“Hey man, you okay?” were the first words that made me realize this wandering vagrant was a well-known fixture and very real, which brought out a dash of reverence—one that I wasn’t privy to. The cafe was already packed, stagnant with the lingering lunch crowd. The patrons eyed any new bait that gravitated in. I now felt like the loner, the pariah.

As if on cue, a couple glasses of water were set on the table. Then a hippie in the corner, stirring, added, “What the fuck was that all about?”

Then this done-up goth chick with long, straight black hair fused with half a jewelry store brushed up against me and asked if I wanted something to drink.

There’s a middle moment in everyone’s life, a sort of comfort zone when living just works, like the right amount of strokes on a canvas: Too few doesn’t speak to you, too many really looks like shit, but this certainly ranked as one of those split seconds of impunity. The eyes of the world, in this case the coffee-gulping patrons, now enveloped me as one of their own. I had sway. The goth returned with my coffee and introduced herself as Rhiannon.

[blocktext align=”right”]All of a sudden, I felt this pressure on my left shoulder reaching around my bicep, and the next thing I know I was turned around and smothered in a bear hug. It was Bob.[/blocktext]“Just like the song,” I said.

“No, not at all,” she stated, “more like the goddess in Welsh mythology, silly. I’m afraid that’s where Stevie Nicks stole it from.”

“Oh,” was all I could add to that, plus, “Thanks for the coffee.” All of a sudden, I felt this pressure on my left shoulder reaching around my bicep, and the next thing I know I was turned around and smothered in a bear hug. It was Bob.

“Thanks man, you’re a real decent person. You’ll be blessed some day,” he said. “Who the hell are you, by the way?” glaring into my soul with his deep-set hazel eyes. “We’re compadres now, my friend,” he added.

Like it or not, I was indoctrinated into I-didn’t-know-the-hell-what. But I soon figured it out. Not everyone was privy to actually facing F.U. Bob and living to tell about it. He was Kent’s spiritual guru who knew almost everything about anything—philosophy, religion, politics, music, history, film and, of course, art.

I never saw Bob after that day. Susan’s wound up closing. I really didn’t galavant into Kent much anymore because the girl I was after decided it was time to marry. That was our stomping grounds; do the bars, some sex, then a breakfast buffet at Manners Big Boy, yeah.

Piddling on the Internet about a year ago, I happened upon a Regina Brett story. Title caught my eye: “Kent ‘folk hero’ was more than he appeared.” And damn if she didn’t hit it true: “Most people didn’t know his name, so they wouldn’t have recognized the local obituary that said Robert E. Wood died on February 5th.”

Shit, I never even knew. I wish I had. Ugh, Bob—so sorry. F.U. Bob died. Wow. F.U. Bob. Here’s to you, my friend. (Author flies the bird and shakes his hand wildly in the air.) Wherever you may be. Goodbye.

M.J. Knapik is an adjunct professor of English and Communications at Lakeland Community College and Lake Erie College. His passion is training dogs for Guiding Eyes for the Blind and is currently writing a novel about his experiences.