Two members of Food Not Bombs were pulling a faded Little Tikes wagon with just a few bottles of water and some wrapped packages of food through Public Square when they stopped and offered me a bottle. It was hot, the water was cold, and I wanted it. I also wanted to know more.

Who were these people making sure anyone who was hungry, thirsty, and broke at the RNC was well taken care of?

Maggie Rice, the cofounder of one of Cleveland’s two Food Not Bombs chapters, is in her late twenties, and has been feeding people since she was child serving in kitchens with her parents.

She first discovered Food Not Bombs as she was learning about what she called “alternative political ideas. The now 35-year-old anarchist initiative, which views feeding the poor and hungry as a radical political act, began as a way to protest nuclear weapons and militarism in the 1980s, but soon came to encompass a wide range of social protest movements, including the fight for food access itself. 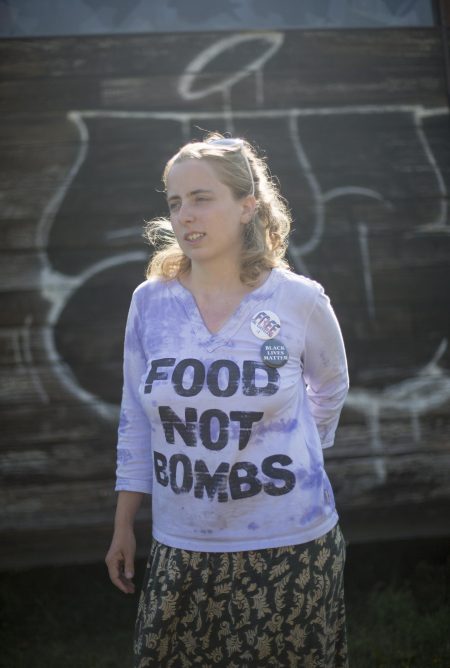 “Learning about food inequity was also learning that people don’t have access to fresh fruits and vegetables even if they have food stamps,” says Rice. “Or you might live in an area where you might have money, but still won’t have access, and that’s not right.”

In the summer of 2014 Rice was upset by international events like the bombing campaign in Gaza and, closer to home, the police killings of young black people throughout America. The murders of Tamir Rice and Tanisha Anderson in Cleveland were very upsetting to her and she, like many, responded by taking to the streets. But she noticed that no one had food.

There had been a Cleveland chapter of Food Not Bombs providing free community meals on the on the west side at West 25th and Lorraine for years. But, according to Rice, they weren’t explicitly feeding activists.

“I Knew Food Not Bombs had a history of supporting people in struggle,” she says, whether “that struggle was against poverty or other forms of oppression.”

With activism in Cleveland suddenly ramped up, she decided to start cooking. She and her friend Rachael Haffey started a new FNB chapter in Lake County and the east side. They distributed to several communities in Lake County as well as a food share on Saint Clair Avenue each week.

But when the RNC announced it was coming to Cleveland, the east and west side chapters came together to work with another group called Seeds of Peace.

“Seeds of Peace is a collective of “activist cooks,” says Michael Bowersox, an SOP lead coordinator in Cleveland last week. “We go all over the US to support resistance.” 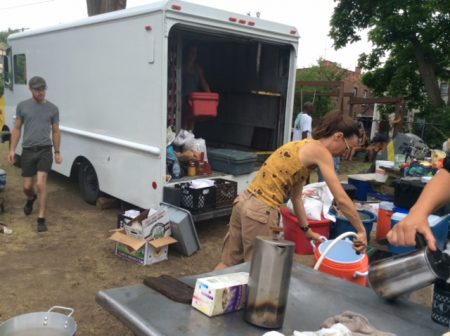 Seeds of Peace were invited to Cleveland by the Food Not Bombs folks, and cooked for four days for RNC protesters at St. Paul’s Community Church, where Reverend Doug Foster says they fed between 50 and 100 people three meals a day of mac and cheese, coleslaw, potato salad, burritos, and more made from food that had been donated, or purchased with donated money.

By the end of the convention, says Bowersox, there was a noticeable increase in the number of people who showed up for meals at St. Paul’s. “That gave us a sense of how great the need is here on the west side.”

Bowersox says they received enough contributions to share the food and other supplies left over with the St. Paul’s food pantry as well as St. Herman’s House of Hospitality, a shelter on Franklin Blvd.

Ty, a local community activist, once homeless himself, now employed by St. Paul’s said of Seeds of Peace “They’re coming here was beautiful.”

And the food? Ty said there were no complaints, and this reporter concurs. Without those burritos, this story might not have been possible.

Anna Limontas-Salisbury is a Belt RNC Fellow and a freelance journalist currently “scratching and surviving,” in Bed-Stuy, Brooklyn. She began her media career as an intern with WBAI Pacifica Radio’s “Under The Learning Tree,” with host and producer Kamau Khalfoni, and with Women’s eNews McCormick New Writers Program. She has also apprenticed with Bric Arts Media (formerly Brooklyn Independent Television), where she learned to produce segments for local television. She’s a proud graduate of the CUNY Graduate School of Journalism, class of 2008, and a contributing writer to Women’s eNews, where she writes about women and poverty.