Home Again at the Southside Reunion

In Flint, Michigan, a gathering of the descendants of the men and women who joined the ‘Great Migration’


For seventeen years now, current residents, former residents, and descendants of residents of Flint, Michigan’s Elm Park-Lapeer Park neighborhood have gathered every August at Brennan Park for the Southside Reunion. The park is adjacent to Stewart Elementary School, which opened in 1955 to educate the Black families that would flood it as Flint rode the wave of a surging automobile industry and closed in 2009 after years of falling enrollment and a receding population citywide.

I grew up in the old neighborhood, so you can find me there. These get-togethers are like a multigenerational tailgate, where fond memories and old childhood and teenage rivalries alike have aged well. Even those who have had a tougher row to hoe since the days when we played in the fields and ran those streets—men and women who may have done some time, fallen victim to substance abuse, or some other misfortune—are embraced for the history that we cherish, and for having made it through to the other side.

Over the years, the annual tailgaters have grown to include people from the neighborhoods east of Elm Park-Lapeer Park, across the major north-south thoroughfare of Dort Highway. Over in the Evergreen Valley and the Evergreen Estates—or “the Valley” and “the Estates”—where the houses of our sometimes-hated rivals were newer and the median household income higher. They also attended a different elementary school (Scott), and later different junior high and high schools, when the district was rearranged in 1976 as part of a federal desegregation order, and to address shrinking enrollment.

The re-drawn school boundaries would keep our neighborhoods separate past grade school, but we remained loyal Southsiders. And, whether we still resided in the Flint area or merely back in town to visit (many of us now living out-of-state and beyond the Rust Belt), we were home again at the Southside Reunion.

“The Southside” is a holdover from the days with the city’s Black residents defined their identities based on geography. Here or there? Northside or Southside? You were either one of us or one of them. The division was handed down by great-grandparents, grandparents, and parents who lived in the neighborhoods where the city’s first Black dwellers resided—on the Northside, bordering the sprawling Buick Motor Division complex, the St. John Street area, in particular; and on the Southside, mainly in the Floral Park area. (The St. John Street and Floral Park areas were razed in the early 1970s to make way for I-475 and the I-475/I-69 interchange, respectively.) Southsiders were naïve and stuck-up; northsiders the streetwise rogues. Or so it went.

In truth, the connections were richer, deeper, and far more complex. For most of us were the offspring of a great mass of people—some six million Blacks who, between 1916 and 1970, decided to leave the rural South for better lives in the West, Midwest, and urban Northeast, that historic movement of American citizens known as the Great Migration.

Still, if there were a physical line of demarcation for the division, it was the Flint River, whose reputation of late is tied unjustly to the Flint water emergency. The waterway meanders seventy-eight miles south from its headwaters, northeast of Flint, and through the city’s downtown before eventually turning north again to connect with the Shiawassee River in neighboring Saginaw County. It formed the eastern boundary of the long-vanished St. John Street neighborhood. This multicultural community—on streets named Michigan Avenue, St. John, and Easy (yes, there was an Easy Street)—was home to an array of transplants: European immigrants from Hungary, Poland, Italy and Croatia, as well as Black migrants from the cotton and tobacco fields, the pine forests and orange groves “down South.”

That neighborhood, St. John, is where my maternal grandparents—Ernest and Rosa Holliday—made their home. Unfortunately, I never had the chance to meet them; both died before I was born. But here’s what I know:

Sometime in the early 1920s, the Hollidays left tiny Okolona in the heart of Mississippi’s cotton region for Dee-troit, as the southern old-timers pronounced it. They likely settled in Paradise Valley, also known as Black Bottom, joining thousands of other Blacks who had flocked to Detroit, where the Black population had exploded by more than six-hundred percent between 1910 and 1920. My mother, Rose, was born there in 1925. 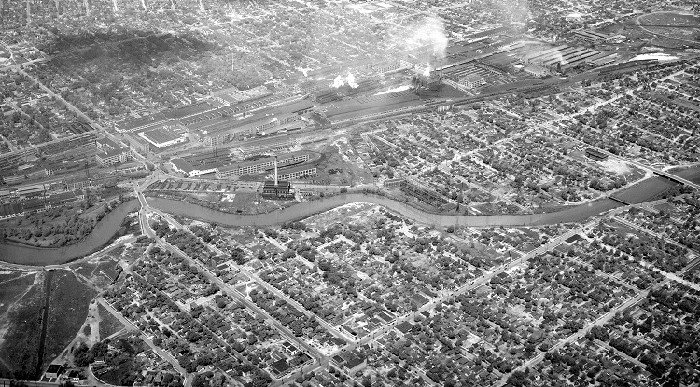 A 1936 picture of the Buick complex in Flint. The St. John’s neighborhood is wedged between the Flint River on the south, and the railroad line to the north. Photo credit: Walter P. Reuther Library, Archives of Labor and Urban Affairs, Wayne State University.

By 1927, Ernest, Rosa, and their two daughters were residents of Flint, living on St. John Street in the vicinity of the Ukrainian Club, the Croatian-Slovenia Club, Dom Polski Hall, Eastern Orthodox churches, and Black Baptist and African Methodist Episcopal churches. St. John Street became the main thoroughfare of a thriving Black community, not unlike Paradise Valley in Detroit. My grandfather and his brothers were barbers, and frequently serviced Black entertainers of the day who performed in Flint as part of the “Chitlin’ Circuit.” One of the venues was the Golden Leaf Club in Floral Park, which still operates today—one of the very few remnants of that long-vanished neighborhood.

Meanwhile, Grandma Holliday was a homemaker and domestic, and later worked in armaments production, along with mama, at AC Spark Plug, on Industrial Avenue, during World War II. Rosa and Rose—two true-to-life Rosie the Riveters.

Sometime before the Hollidays’ arrival, my paternal grandfather, Hardwick Campbell, came to Flint in search of work. He hired into Buick and was assigned to the foundry—the only area where Blacks could work for the carmaker. Once settled, he sent for my grandmother, Eula, who, along with their one-year-old son, Clarence, joined Grandpa in 1922. They lived on Grant Street, just north of the Buick complex. It, too, was a multi-ethnic neighborhood “across the tracks”—the rail line used to ship in raw materials and ship out new Buicks from the plant—and a step up from the St. John Street area.

They had come from the pitch-tree forested area near Montezuma, Georgia, on the eastern banks of a different Flint River, which snakes 344 miles from a region south of Atlanta to the marshlands of the gulf coastal plain in the southwestern corner of the state. Other family members would leave Georgia, too, for destinations in Ohio (namely Steubenville and Akron) and Weirton, West Virginia, to labor in the steel mills.

Grandpa Campbell would spend twenty-five years in the Buick foundry. Meanwhile, Grandma took in laundry for additional income during the Great Depression. Clarence, my father, would deliver the finished laundry to customers. Later, the robust laundry service prompted Grandpa to buy daddy a 1925 Chevrolet to use for pickup and delivery.

Around 1940, Grandpa bought a Mobil gas station on Pasadena and Industrial avenues, across the street from Buick. The signage at Campbell’s Service Station featured the iconic Mobil Pegasus. Buick eventually needed more space for parking, so Campbell’s Service Station relocated to Pierson Road and Selby Street—the location I remember—where it remained until the mid-1970s, when clearing began for the coming of I-475. That’s when Grandpa retired.

Back in December 1942, the year my parents got married, and not long after Grandpa opened his business, daddy was inducted into the U.S. Army. He had been working as a janitor at AC Spark Plug on Industrial Avenue when the Japanese bombed Pearl Harbor. He would go onto serve more than three years in the segregated 92nd Infantry Division and brave combat in Italy, earning both a Combat Infantryman Badge and Bronze Star. After the war, my parents resumed their lives in Flint. Daddy went back to AC while mama, who left the factory job to make room for the returning veterans, was an elevator operator at the Citizens Bank headquarters downtown. By 1948, they began building a ranch-style brick house off a dirt road in a lightly populated part of town, a little southeast of Floral Park, and down the street from the future site of Stewart School.

I have never been to Okolona, Mississippi. I have never visited Montezuma, Georgia, although I do recall driving through there late one night with the family on the way to Delray Beach, Florida. I was asleep at the time but was awakened during a refueling stop by an older sister’s sobs. “I’m tired of seeing my life pass before my eyes,” Sherry cried, clearly unnerved by daddy’s speeding through the dark winding country road on the way to Montezuma. He had decided, on a whim, to take a brief detour off southbound I-75 for a quick drive through of the place of his birth. (If I had to guess, I would say that route taken into town was GA-224.)

Sherry was no country girl. None of us were, even though my parents had a summer cottage on a small lake in Michigan’s thumb region. We are city folk, by and large, born and bred like our mother, a Detroit native in urban spaces. Moreover, the gulf between my Flint upbringing and my southern roots is as vast as the Atlantic Ocean, as disconnected as the two Flint Rivers that flow through my family’s history. 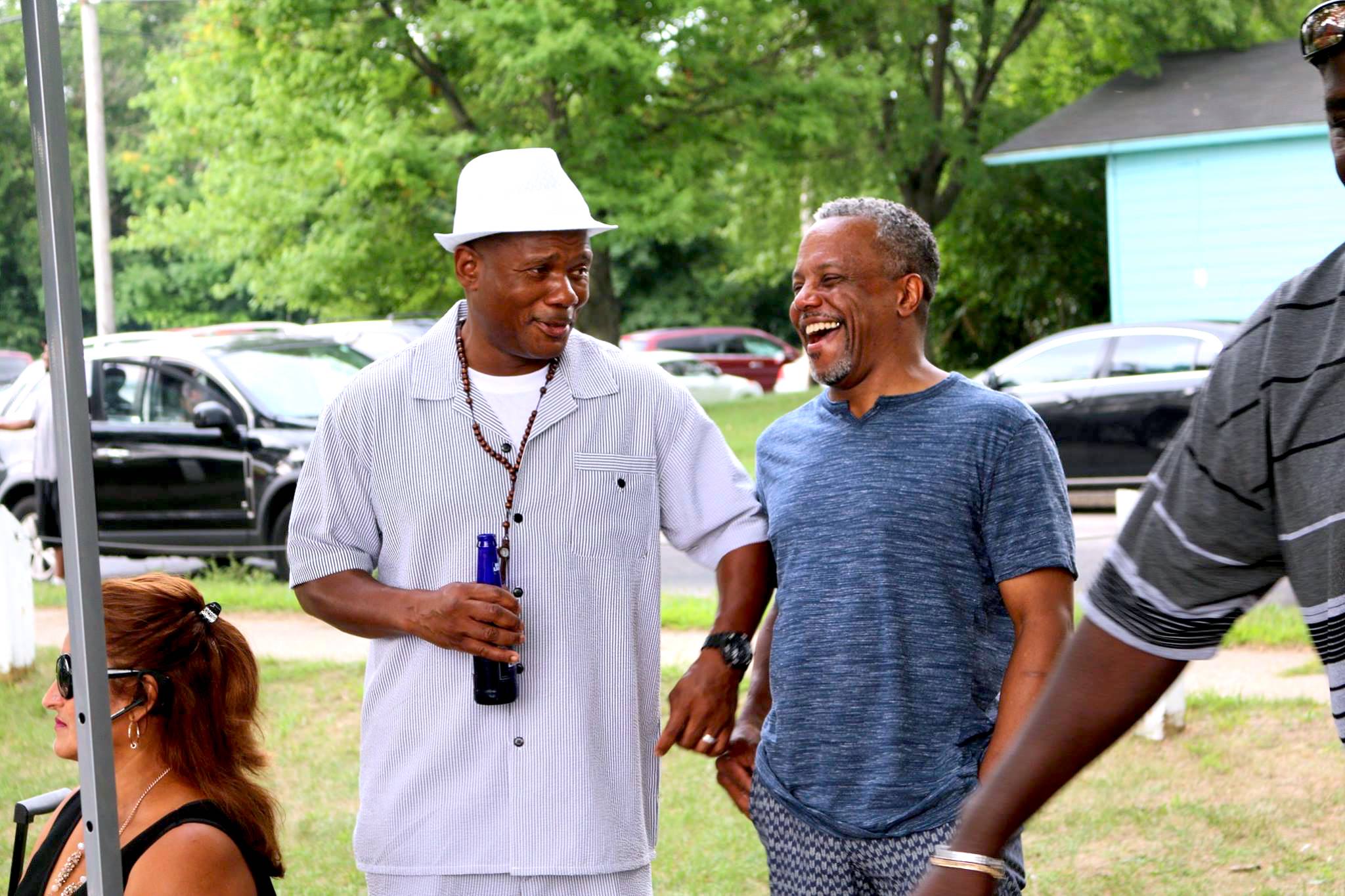 In that regard, I’m not alone. There is a silent lament about the historical detachment to our family histories that is more common among Black people than other groups, I think, though it’s rarely discussed. About a year ago or so, my wife casually noted that the knowledge of her family tree extends only to her maternal grandparents, for the most part. I have heard similar comments from friends and relatives. As for myself, I know only the names of some of my paternal ancestors extending back to a slave sold and bought in Virginia; even less is known about my mother’s side. (My sister, Carole, has begun researching our family tree and is slowly uncovering some of our roots buried in Georgia and Mississippi.)

That separation, that break in the lineage of our families is part of the appeal of gatherings like the Southside Reunion. Beecher, a small water district that shares a common border with the northern Flint city limit, also has a large tailgate gathering each summer. That community, which was nearly wiped out by a devastating tornado in 1953, used to be all-white. Today, it’s virtually all Black and remains a deep source of pride for everyone I know who grew up there, including my wife. They call it “Buc-town”—shorthand for Buccaneers, the high school mascot. (It’s also worth noting that, in some cases, the descendants of those who decades ago fled Jim Crow and sought economic opportunity elsewhere are returning to their southern homelands.)

I feel that separation deeply in my own life. To my knowledge, I do not have any immediate family remaining in Okolona and Montezuma, no bridge to that ancestry. What I do have is a tradition of Black reunions that connect me to my community and family, and also fulfill that longing for meaningful attachment. In fact, my siblings and I are planning our first one next year around the Fourth of July. After the Campbell family reunion, I will then look forward to stopping by the old neighborhood again in August, for a couple of beers, laughs and updates at the 18th Annual Southside Reunion. ■