Flint’s Younger Voices Get a Hearing on Stage

On a recent Friday evening, the cast of Flint Youth Theatre’s current production The Most [Blank] City in America, rehearsed a scene in which community members have gathered for a meeting to talk about possible new names for Flint, Michigan.

“Well I’ve been thinking, and I thought that daffodils are quite nice,” one actor says to Mr. Right, a Donald Trump-esque businessman trying to take over and rebrand the city that has been labeled the most miserable and most violent in the country.

“They grow in the spring, and spring is about renewal, and new birth, and you know… winter has ended and maybe naming the city something to do with daffodils might you know, suggest that like, winter — which is all, like the bad times for Flint — is finally over and Flint’s spring has finally, you know, sprung? Or something like that…”

She goes on, calling out the other actors for ignoring issues, for not living in the city. It gets awkward.

It’s a scene in the show, a breaking of the fourth wall — but it’s also kind of real. The scene was borne out of conversations during rehearsals. When one actor says it’s a little late to be changing the show, he’s not joking. It’s one week until the show opens, and this scene is just the latest is a series of revisions and additions to the script. 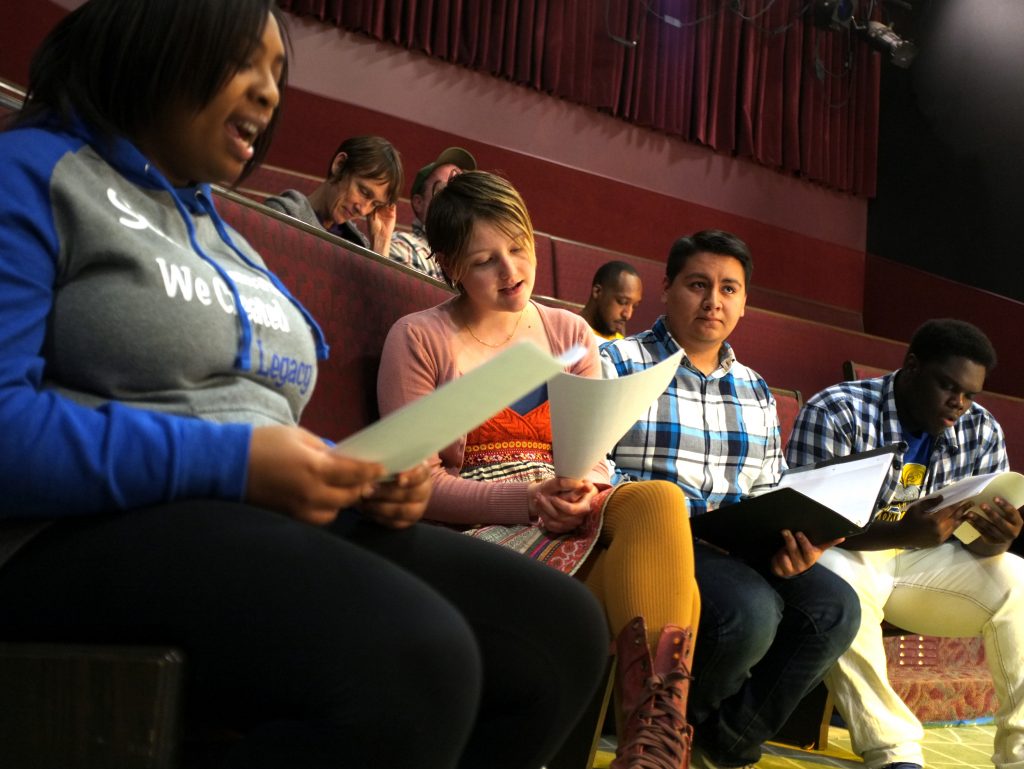 From left, Alazsha Donerson, Layla Meillier, Latroy Childress, and Colin Edward rehearse at Flint Youth Theatre for “The Most [Blank] City in America,” a play about Flint, Michigan.

That shouldn’t be surprising. Most [Blank] City in America is FYT’s way of taking on the big question of how you define a place like Flint. The project started over a year ago, led in part by FYT artist Andrew Morton, a local playwright and playwriting teacher at the University of Michigan-Flint who’s experienced at interviewing people and developing a script based on their stories and input. Previous community-based theater projects include Embers, a play about a record-breaking string of arsons in Flint, and State of Emergency, about Michigan’s emergency manager law (which many now blame for Flint’s water crisis).

The show opened April 16. Upon entering the theater, audience members receive postcards with a picture of Flint’s “rock,” a concrete block near an expressway entrance ramp on the west side of Flint that every few days is painted with a new mural or message. The postcards read “Most ____ City in America,” and patrons are asked to fill in an appropriate word.

FYT’s executive director, Jeremy Winchester, says that once FYT decided to pursue a Flint-based play, the challenge of trying to name or define the city was there from the beginning.

“It was right after one of those publications calling Flint the most violent city in America, or the most dangerous, or the most left behind…or it might have been the Laura Dimon one,” he said, referring to a mic.com article with the original headline of “This is America’s Most Apocalyptic, Violent City — And You’ve Probably Never Heard of It.” (After a significant backlash from the Flint community, the headline was changed to “This is One of America’s Most Violent Cities — And It Deserves More Attention.”) 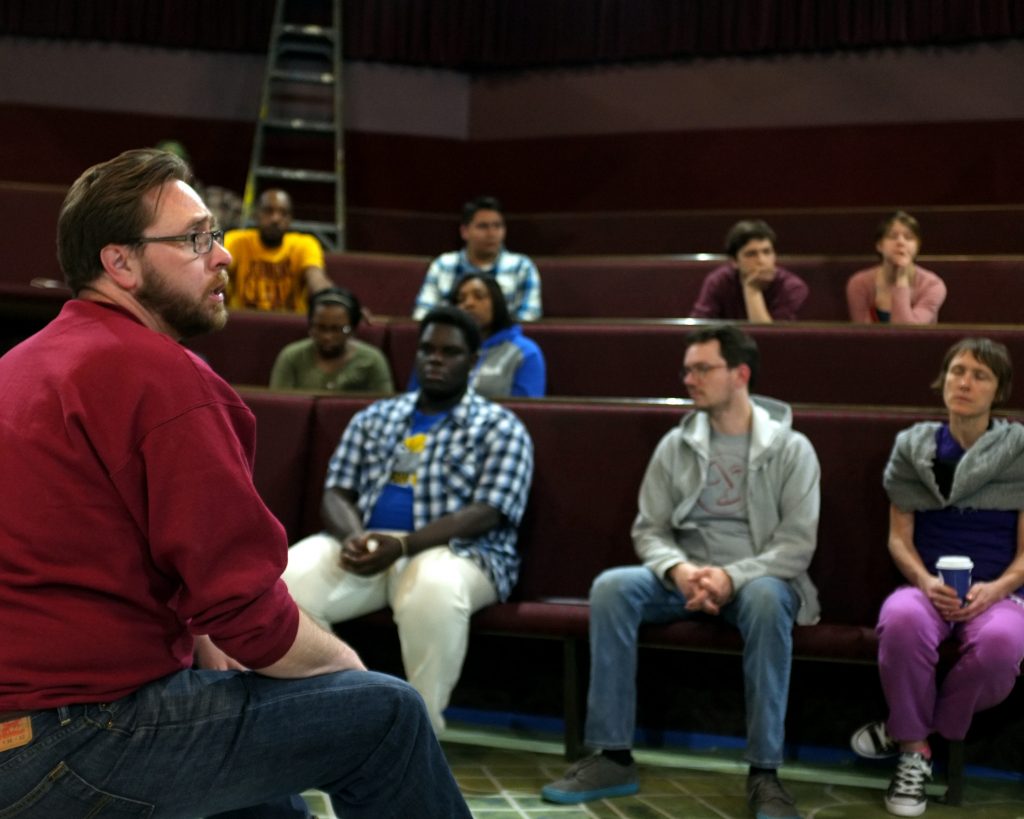 Flint Youth Theatre Executive Director Jeremy Winchester addresses the cast and crew before a rehearsal of “The Most [Blank] City in America,” an original play about Flint Michigan.

“I think it was that one that sparked this dialogue of, sure, violent is an accurate word. But so could be forgotten, or resilient, tenacious. I mean, any number of words,” Winchester says. “The words we use to describe ourselves affect how we think about ourselves. … What it means to live in a city with high crime statistics, none of that changes, but it certainly does affect our sense of how inevitable those things are or not, how changeable those things are or not.”

Winchester doesn’t have to do projects like this. Past Flint Youth Theatre productions have been about what you might expect: “Frog and Toad,” “The Cat in the Hat,” and other classically kid-appropriate material. But plays like this one are why he returned to his hometown in 2012 to run Flint Youth Theatre.

Enrique Vargas is seventeen and from Flint. He plays himself in Most [Blank] City, which ends with his delivery of a monologue about the beauty of Flint.

The ideas came from Morton’s conversations with residents, but Vargas said the thoughts echo his own. 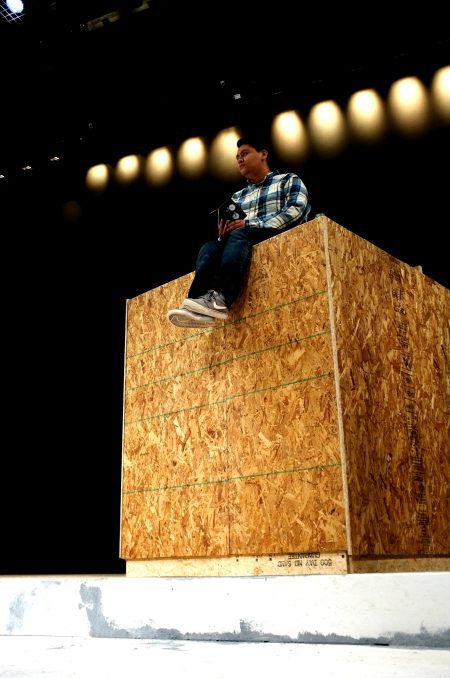 Enrique Vargas, 17, sits atop a replica of “the rock,” an iconic cement block in Flint, Michigan where people often paint murals and messages.

“I’m portraying myself in a way but I feel like I’ve been given the task to portray all of the optimistic people in Flint, all of those who find beauty in things that other people might not find beautiful in Flint,” he says. “I tell the story of how I got a bike for my 13th birthday and started riding around Flint and it opened my eyes to see that there are beautiful things in Flint and not just the crummy neighborhood I’ve lived in my whole life.”

Donerson, who’s eighteen, has been involved with FYT since she was ten, taking acting and improv classes. She’s the one who interrupts the play before launching into a long monologue. She describes herself as “that one person in Flint who wants to say it but never says it — like the water crisis and the violence and all of that and all of the bigger issues. … From my perspective they want to say it but they’re afraid that they’re not going to be heard or nobody’s going to care about their opinion.”

Having played smaller roles, this is, she says, her chance to shine.

“It’s addressing a lot of issues I want to say something about. Coming from a young person, it’s really empowering because they’re forced to listen to you,” she says. “I get to finally be heard.”

“Most [Blank] City in America” runs through May 1.

Scott Atkinson is a freelance writer based in Flint, Michigan. For the past several years he has been an award-winning features writer for The Flint Journal. He teaches writing at The University of Michigan-Flint. Atkinson is also the editor of Belt’s forthcoming book, The Flint Anthology.

Scott Atkinson’s other Belt pieces can be found here.