Why Foxconn’s Wisconsin Promise Of 13,000 Quality Jobs Is An Empty One

As the Wisconsin Senate prepares to vote on a bill that would award $3 billion in tax incentives to Foxconn, former employees of the Taiwanese tech giant’s largest stateside operation warn that a factory in the Badger State might not be good for Wisconsin workers.

Of the Foxconn factory in Plainfield, Indiana, some 16 miles west of Indianapolis, these former employees describe a corporate and management culture that treats Indiana workers as disposable; that favors Taiwanese nationals for management and advancement; and that heavily relies on undocumented workers who are carefully distanced from the parent company via the heavy use of temp agencies.

Indiana native Carl Williams spent a year and a half between 2008 and 2010 at Foxconn’s Plainfield facility as a quality technician and later a data analyst. He reveals that a majority of the 900 workers who were employed at the computer assembly factory during his tenure there were undocumented. “On days when word got out that Immigration [and Customs Enforcement] was coming,” he says, “most of the workforce would be missing.” Williams also describes a “wink and nod” attitude by management toward the use of undocumented workers as the facility declined to be certified as an e-verified workplace (an internet based system of checking worker identification). According to Williams, management acted on the pretense that they simply weren’t aware of, and certainly not responsible for, the documentation status of the bulk of the workforce. Williams added that management appeared to be more interested in rock-bottom wages, dodging the cost of expensive benefits, and maintaining their ability to lay off and rehire for seasonal demand. 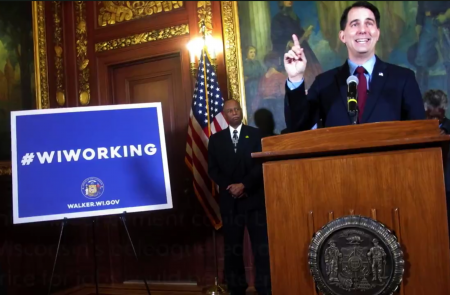 Andre Morris, who was a Foxconn employee in Indiana from 2005 to 2013, confirms the large number of undocumented workers at the Plainfield facility and also recalls the sea of empty chairs when there were rumors of an impending ICE raid. While he admits to having some success there, working his way up to manager after beginning his career toiling on the assembly line, Morris feels his opportunity for advancement was limited because he was African-American, reporting that he saw only white and Asian people above him. “There’s just not enough opportunity,” he says, when asked if he would recommend working at Foxconn, adding that his most vivid memory was the endless, repetitive work in stifling summer heat in an airless warehouse without air conditioning.

Allegations that Foxconn mistreats its workers at the Indiana facility should not be surprising. After all, Foxconn, the world’s largest contract assembler of technological devices, is most famous for a spate of suicides at its iPhone plant in Shenzhen, China. In 2010 alone, more than a dozen workers jumped to their deaths from buildings on Foxconn’s Shenzhen campus, purportedly distraught by low wages, and poor working and housing conditions. Chillingly, Foxconn’s response was to install nets outside the taller buildings on its Shenzhen campus.

As Wisconsin lawmakers prepare to vote on a bill that would bring Foxconn to Wisconsin, proponents of the deal dismiss these old stories as a Chinese phenomenon, and not a Foxconn one. Still, the best measure of what Wisconsin workers will face is Foxconn’s operations stateside and elsewhere outside of China.

When Williams was with Foxconn, he recalls each station having a process time of 12 to 20 seconds and that training took a targeted seven minutes or less to ensure maximum workforce flexibility. ”The bulk of employees are disposable and treated as such,” he says, explaining that the company is tireless in its pursuit to cut costs and increase productivity. Williams’s descriptions of life at Foxconn confirm others’ experience reported in forums on TechDirt.com and Indeed.

As Wisconsin lawmakers line up to support a 30-year partnership with Foxconn, you would think they would have an intense interest in the kind of corporate citizen Foxconn might be in Wisconsin, based on their behavior in Indiana and elsewhere. So far it hasn’t come up.

As Wisconsin lawmakers line up to support a 30-year partnership with Foxconn, you would think they would have an intense interest in the kind of corporate citizen Foxconn might be in Wisconsin. So far it hasn’t come up.

Proponents of the deal, which include President Donald Trump, Wisconsin Governor Scott Walker, and House Speaker Paul Ryan, are blinded by the political windfall that would come with Foxconn’s promise of 13,000 jobs at the $10 billion Liquid Crystal Display (LCD) factory and assembly complex planned for southeast Wisconsin (Ryan’s home district). These politicians are so eager to score a political win that much of Wisconsin’s promise of $3 billion in tax incentives to Foxconn would be paid in cash.

But careful study of Foxconn’s past dealings shows that the number and quality of jobs promised for Wisconsin are highly suspect. Back in 2007, when Foxconn announced plans for the facility in Plainfield, they said the plant would employ 1,400 people. The fact that the facility has matured to a workforce of 900 gives some indication of their prowess, or perhaps lack of honesty, when it comes to job prediction. (The same percentage shortfall would take the promised 13,000 jobs in Wisconsin down to 8,357.)

Foxconn’s original proposal to Wisconsin is also telling. Before the jobs number swelled to 13,000, Foxconn initially proposed 2,000 jobs — incidentally, the same number of workers currently employed at Foxconn’s LCD factory complex in Sakai, Japan, the largest and most advanced LCD factory in the world. The LCD plant itself was up and running with 1,000 workers. Boosters of the Wisconsin deal have visions of the working lines at the old Chrysler and GM factories in Kenosha and Janesville, where motivated high school graduates could make a living wage. But the few images and inside descriptions we have of the Sakai plant, by far the best model for what the Wisconsin factory will look like, show engineers and technicians behind computer terminals overseeing the work of giant robotic machines.

In addition to the numbers, the quality of jobs promised Wisconsin is also in question. In their written testimony in support of the Foxconn legislation, the heads of the Wisconsin Department of Administration and the Wisconsin Economic Development Corporation used the term “family-supporting 13,000 jobs” eight times. Much has been made of Foxconn’s estimate that the average salary will be $54,000, but there is no written guarantee regarding it. Furthermore, pay the top Taiwanese management team tens of millions each and the average is so skewed as to be meaningless. There is a welcome provision in the legislation that Wisconsin’s generous contribution of 17 percent of payroll be limited to jobs paying $30,000 to $100,000, which will certainly incentivize Foxconn to meet that mark. But Foxconn is relentless in cost management and if an unsubsidized job can be filled at a wage producing a lower cost to the company than a subsidized $30,000 job, history shows they’ll do so. And the modest constraints of the legislation give Foxconn enormous flexibility to spread those subsidies beyond native Wisconsinites. For instance, the company is known for traveling efficiency teams that roam the globe imposing the company’s latest assembly improvements. These teams have to have a home base somewhere—why not Wisconsin, where their wages would be subsidized by the state?

Williams’s experience at Foxconn, which in addition to the Plainfield factory includes a stint at a Foxconn plant in Juarez, Mexico, is instructive. “If you looked out over a floor of 6,000 workers and saw 50 or so Asians, you knew right away who were the engineers and bosses,” he says. Williams describes a colleague still at the Indiana plant, well qualified for a promotion, who has repeatedly seen his next step up blocked by the newest arrival from Asia. 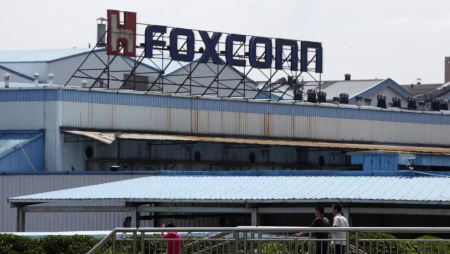 About those Asian engineers and managers. Between 2014 and 2016 Foxconn filed for 55 H-1B visas, all associated with engineering positions paying annual salaries between $46,000 and $82,000. H-1B visas allow higher-skilled foreigners to work for up to six years in the U.S. Economic impact studies on the Wisconsin plant have shown serious concern about workers infiltrating from Illinois but have been strangely silent on the almost guaranteed presence of Asian managers and engineers.

If Foxconn’s 2014-16 rate of H-1B workers holds true for the proposed 13,000 workforce in Wisconsin, some 520 foreign engineers could be expected on site. Such workers with limited U.S. futures would likely house at the Foxconn complex and have little impact on the regional economy. Given an average three-year stay and average salaries of $60,000, Wisconsinites would be paying around $16 million a year for just these H-1B workers.

As for the jobs that would go to Wisconsinites, a look at Foxconn’s Houston factory might also be telling. Based on job listings and anecdotal information from workers, Houston assembly workers generally start at the state’s minimum wage of $7.25 per hour and report being stuck at that level for years, even as they work many hours of overtime. Like the Indiana operation, the Houston location is reported to be reliant on temp agencies. Here’s what Williams predicts: “Foxconn may bring 9-12,000 jobs to Wisconsin. The facility will be staffed 90 percent by an uneducated and unskilled workforce, for as cheaply as the local economy allows.”

Every indication from Foxconn’s history in China and their track record in the U.S. and Europe points towards an employer with a laser-like focus on the bottom line and a corporate culture of putting profits ahead of workers’ interests. Wisconsin’s deal with Foxconn is not the sort that will have a trial period or be subject to much future negotiation. Once the state of Wisconsin sinks over $1 billion into the Foxconn facility’s construction, it’s going to be hard for state officials to threaten its operation by being sticklers over things like work environment, employee policies, H-1B visa engineers or advancement opportunities for Wisconsinites.

Should we get to the stage where Foxconn jobs are available and subject to the 17 percent kickback, accounting and oversight will be a nightmare as Foxconn shuffles a small army of workers in and out of positions and moves management and engineers to and from Asia. As Robert Kraig from Citizen Action of Wisconsin pointed out in his Wisconsin Senate testimony, the proposed overseeing Wisconsin agency, Wisconsin Economic Development Corporation, has failed in their ability to track jobs created from their current and in comparison modest budget. He quoted the state’s audit bureau as issuing a warning to “treat WEDC’s posted job numbers as suspect.”

As for Williams, he cites his experience with Foxconn as directly responsible for his becoming a union electrician and a strong supporter of workers’ rights. “All employees,” he says, “who are working and contributing to the American economy deserve to be treated with dignity and have their wages, benefits and rights protected.”

____
Lawrence Tabak is a writer based in Madison, Wis. His work has appeared in Fast Company, Forbes, and The Atlantic Monthly, which published his exposé on the false assumptions behind convention center construction. He can be reached at: ltaba@yahoo.com.