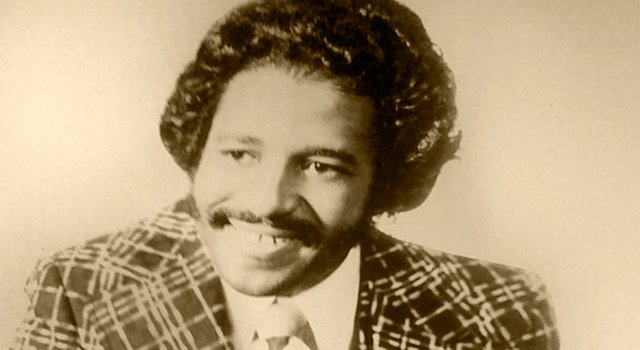 “Mellow Tone Studio, Wilton E. Crump, Director & Arranger” reads the ornate cursive lettering of a hand-painted sign affixed to the wood paneling in the Crump family basement. Beneath it sits an upright piano weighed down by a half-century of show posters, string arrangements, and newspaper clippings documenting a young (and a not-so-young) man sharing stages with his musical heroes. “You want to know, what ‘Mellow Tone Studio’ was?” chuckles the man calligraphically immortalized in the sign’s bold red lettering. “This is it!”

In 1967, Crump’s mother, a school administrator, commissioned the art teacher to paint the sign. [blocktext align=”left”]For a modest industrial city, Gary, Indiana, had an outsized influence on 20th Century African-American music. [/blocktext]Since joining his school band in seventh grade, the Gary, Indiana native had been obsessed with not only with the R&B stars he enjoyed on the radio and American Bandstand, but also with understanding every aspect of the creative and business sides of the music industry.

Though he never achieved stardom, by some standards Crump has been a success. In the mid-’60,  he led one of the most popular teenage bands in his city’s ultra-competitive talent show/school dance circuit (until a 7-year old Michael Jackson stole his thunder). In the ‘70s, he produced and arranged records for local performers (including a Jackson Five single), released a solo single on his own label, and launched a successful vocal group. And in the ‘90s, he became musical director for the Spaniels, his city’s most legendary act, eventually taking over as lead singer–a position he still holds today. 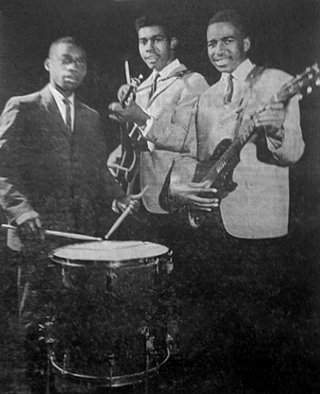 Rarely has a month gone by since his adolescence that Wilton Crump hasn’t performed on stage, and these days his rich falsetto thrills audiences in showrooms and casinos across the country. But whether one measures Crump’s achievements as hits or misses, it is undeniable that over the last 50 years the singer has been a footnote to nearly all the important musical tales his city has told. And though they’re easy to ignore, any scholar knows that footnotes are crucial to understanding a story.

For a modest industrial city, Gary, Indiana, had an outsized influence on 20th Century African-American music. In the early ‘50s, Pookie Hudson and his Spaniels emerged as one of the most important doo-wop groups in the country, with Hudson’s bold leads setting a precedent other vocal acts followed. Their massive 1954 hit “Goodnight Sweetheart” was released by the visionary Vivian Carter, a Gary-based deejay and record shop owner whose Vee-Jay Records paved the way for Motown by becoming the most important black-owned label of its day. Releasing records by Jimmy Reed, the Staple Singers, the Impressions, and eventually white acts like the Four Seasons (and, briefly, the Beatles), no label had a more impressive roster of blues, gospel, R&B, and vocal groups. [blocktext align=”right”]The Jackson Five did not win that talent show. Crump’s Mellowtones earned the trophy. [/blocktext]By the mid-‘60s, a new group emerged that would redefine Gary in the American consciousness. When young Michael Jackson and his brothers took the stage at the 1965 Roosevelt High fall talent show, it launched the career of one of the biggest superstars in pop culture history.

But the Jackson Five did not win that talent show. Crump’s Mellowtones earned the trophy, and a chorus of boos by an audience upset that the explosive Jacksons, who destroyed the room when tiny Michael did his uncanny James Brown impersonation, were not winners.

“What they didn’t understand was that they weren’t in the competition,” Crump recalls. “Because only one of them was a student in the school, they didn’t qualify for an award. I was not used to hearing dissenting tones coming from an audience.” 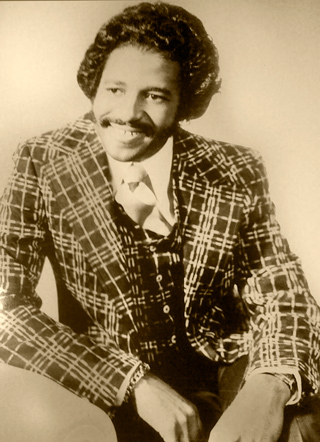 Crump, born in 1949, formed the Mellowtones about a year after getting a guitar for his 11th birthday. As sole vocalist, and guitarist (the trio also included his cousin John Hilson and future jazz sideman Erv Bates), Crump led the group to the top of the teen band heap, which, in Gary, was an elite field. The Spaniels had formed at Roosevelt High, and the school hosted two grand shows a year, with a competitive audition process, and outstanding acts earning spots on rival school stages.

Gary was a small city but it had a big appetite for music. After spending their days benefiting from some of the best high school music programs in the country, aspiring young artists were schooled at night by catching the Dells at Memorial Auditorium, Ray Charles at Gilroy Stadium, Jerry Butler at the Roosevelt Theater, and (if they were resourceful) blues greats like Bobby Blue Bland and B.B. King at F & J Lounge. Opportunities to experience brilliant black music abounded: Crump recalls seeing Louis Jordan and Gladys Knight at Barbara’s Playhouse, a massive Gary roller rink (his curfew made him miss the headlining Impressions) while Duke Ellington was playing the same night at the Roosevelt High School auditorium.

Already a student of the music industry (“I was the only one I knew that read all the fine print on records; that’s how I knew about publishing and producing”), Crump rehearsed his teen band relentlessly at Mellow Tone Studio, recording practices on his 2-track reel-to-reel, and became a familiar face at Bud Pressner Music and Recording, Gary’s main recording studio (Pressner led a big band in the ‘40s and was engineering underground dance records until shortly before his death in 1995). Though the Mellowtones recorded a single–and Crump successfully pursued publisher clearances to release a cover version of the Impressions “For Your Precious Love”–he mistakenly let the clearance lapse, and the recordings went unreleased.

Bolstered by their hometown success story, Crump returned home and put his experience and education to use. He took teaching jobs but doggedly pursued his music career, splitting time between Pressner’s and fancier studios in neighboring Chicago. He wrote songs and shopped them around (with little success); helped locals with recording projects; played in cover bands; and when word got around that he was good at arrangements (and worked cheap), Gordon Keith began utilizing Crump’s talents. [blocktext align=”left”]Decades later, his sweet soul tunes are treasured in Los Angeles lowrider scene, but initially had little success outside of local radio.[/blocktext]His most well-known release during that period was the 1970 Jackson Five single “We Don’t Have to Be Over 21 (To Fall in Love).” Though Keith had only released one single before the Jacksons migrated to Motown, he had recorded a third song with the boys, and hired Crump to augment the spare recording with the kind of lush string arrangements that had made the Jacksons black bubblegum royalty. Though hampered creatively (Crump requested 2 violins, a viola and a cello, but got three violins) and unhappy with the final mix, Crump maintained a working relationship with Keith over the subsequent years. 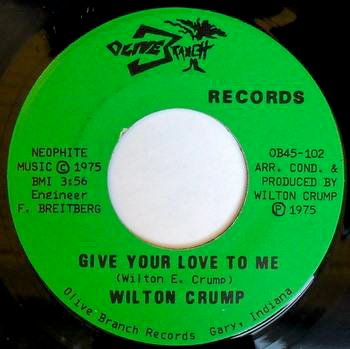 By mid-decade, after several frustrating attempts to sell songs to popular artists, Crump took Vivian Carter’s advice and launched his own label, Olive Branch. His sole release “Give Your Love to Me,”  b/w “Think it Through” b/w was a solid effort, recorded after-hours in Chicago’s Chess and Curtom studios. Decades later, his sweet soul tunes were treasured in Los Angeles lowrider scene, but initially the record had little success outside of local radio, and Crump soon turned his talents towards less original pursuits.

In 1979 Crump, Dr. Randall Morgan, Jr. and Rae Gill formed Raven, a vocal trio specializing in oldies hits. The group became a popular Gary act, playing nightclubs and ballrooms, frequently holding down the opening spots when popular older acts like the Spaniels, Ohio Players, or Billy Eckstine performed.  Raven played regularly through the ‘90s, even reforming a few times after Morgan moved his practice to Florida.

The population of Gary is less than half of what it was in 1960, a statistic sadly illustrated by stretches of neighborhoods where vacant lots and dilapidated, abandoned buildings outnumber functioning housing and businesses. 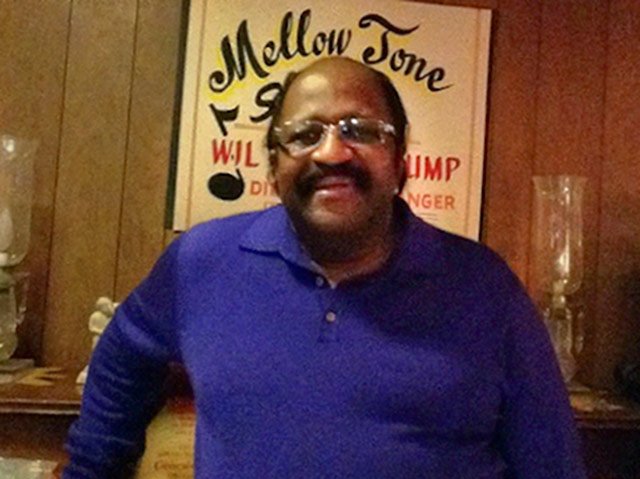 But every time I’ve been invited into one of the surviving Gary houses, I’ve found myself in a warm, proud home with décor that perfectly reflects the great Migration ideal of urbane ambitions mingling with Southern hospitality. Many Gary homes also seem to be a time capsule of the hopeful decades before the majority of steel production migrated overseas and mechanization reduced the number of remaining jobs. After his mother passed away in 1998 ,Crump moved back into his childhood home, and the house, in many ways, still feels like a relic of his parents’ generation.

Certainly the Jackson family bedrooms bulged with siblings, but that’s because it’s hard to fit nine kids into even the relatively nice corner house the double-income, union-salary Jacksons owned. Smaller families had more room to spread out, and much like the white garage bands that thrived across the U.S. in the wake of Beatlemania, it was the bourgeois dreams of property ownership, leisure and culture that led to parents buying music lessons and instruments, and turning their basements into Mellow Tone Studios across Gary.

Crump’s middle class mom not only could send him (and his siblings) to college, but indulged her boy enough to let him drop out to pursue his music dreams (Mrs. Crump quickly re-enrolled young Wilton when his draft number came up, keeping him out of Viet Nam). Not only did factory salaries allow workers to freely spend their money at Vivian Carter’s record shop and the Roosevelt Theater, but many workers were able to moonlight as dreamers, using U.S. Steel’s checks to fund small labels like Steeltown , giving opportunities to the Jacksons and scores of less successful aspirants, who unlike the Hollywood-bound Big Boys, stuck around to see the city’s fortunes turn.

Though Crump doesn’t credit the ups and downs in his music career to Gary’s woes, the day jobs that supported his musical pursuits over the decades directly related to a city struggling with poverty. After teaching music and substituting for a few years, Crump became a case worker for the Division of Family and Children state agency, retiring from that job in 2008 after helping thousands of the city’s poor navigate the welfare system. He currently works part time for a company that oversees court ordered supervised visits between at-risk children and their parents.  As we were wrapping up our interview in time for Mr. Crump to make an appointment, he received a call telling him his afternoon job was postponed, as the mother was having a suicidal episode following a disappointing court date.

Sitting down with me in front of the Mellow Tone Studio piano Crump shook his head, saddened by the state of his city, but as he began reflecting back his voice became more positive, his modest triumphs trumping the tragedies he’s seen in the city he loves.

“I played my first dance in 1953, that’s over fifty years ago, and I was playing talent shows before that,” Crump recalled. “I just turned 64, and a lot of my peers who started out with me are not doing anything musical anymore, but I perform, and still have a lot of my voice. I had a talk with Smokey Robinson a couple of years ago and I was telling him I still do “Ooo Baby Baby” in the same key I did it in when I was 15 years old. That’s a blessing there. Whatever the Lord sends my way, I’m grateful.”

Jake Austen is editor of Roctober magazine, author of several books, and has freelanced for publications including Harper’s, Vice, Chicago Tribune, and Chicago Reader.  Playground (Gliteratti Incorporated, 3/14), his forthcoming collaboration with Paul Zone, is a coffee table book of photographs and stories from New York’s early 70s pre-punk scene.