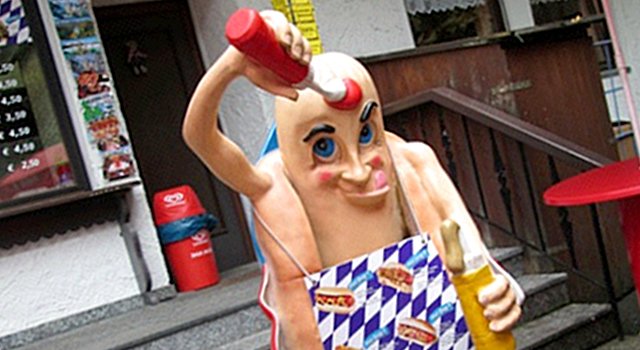 Sausages of every ilk are available in Germany

I’m a healthy but somewhat aging Cleveland resident. I say “somewhat” because I’m not old yet. But I will be, and in a hurry, if I don’t spring into action.

I used to go out and do stuff all the time–every night, as a matter of fact.  [blocktext align=”left”]I come home from work and immediately change into my loungewear and stick my nose into my World War 2 books. [/blocktext] But I switched from that to not going out at all. Everyone knows that’s not good.

Activity is the key to staying young, slim and vivacious. Doing things. I’ve been using Cleveland as an excuse not to do things for too long now. I’ve been unmoved to go out and get into Cleveland anymore. I feel like I’ve seen it all, Cleveland-wise. (Except for the West Side of course, LOL.)

I come home from work and immediately change into my loungewear and stick my nose into my World War 2 books. I’m obsessed. The Nazis’ road to war is my special interest. The Nuremberg rallies, Anschluss, the Sudetenland, the Fuhrer having his way with Chamberlain in Munich, on to the blitzkrieg. And don’t get me started on Barbarossa. Hitler’s greatest blunder!

Anyway, the larger issue: I’ll be home by 4 p.m. and sock myself in for the rest of the evening reading this awful, depressing shit, as it is known to some in my home. Every night! Bad, bad, bad. I stumbled onto something, though, that will help me out. 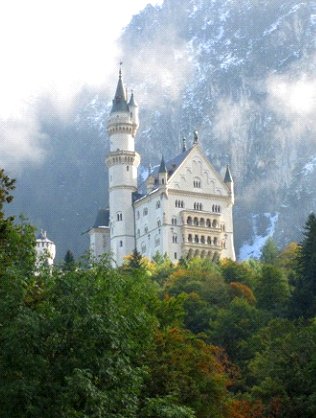 The lure of the Fatherland

This immersion in the Big One directly led to me getting off my ass. My twin sister convinced me to take a two-week trip to southern Germany with her. “I won’t venture to Tremont but I will jet into Munich International!” I always tell my Cleveland pals. Funny the first time.

I wanted to see the places I read so much about. I wanted to see Berchstesgaden, where Hitler “relaxed.” The Black Forest, the Rhine and Danube, Nuremberg, the Bavarian, Austrian and Swiss Alps, castles, medieval stuff, sausages of all ilk, pretzels, gaily decorated beer steins, native Germans singing and shouting (well, as a person of Jewish heritage, maybe not that so much).

My sister and I had a fine time driving and walking around Southern Germany and into Austria and the Czech Republic. [blocktext align=”right”]If not for Inga the GPS Lady helping us we would have become hopelessly, scarily lost in the heart of Bavaria.[/blocktext]The fall scenery was spectacular, snow-and misty cloud-capped mountains, absurdly green pastures and meadows dotted by cows happier than even the cows in California.

Was it like The Sound of Music? Better. Not kidding. But because we’re arrogant and ugly Americans, neither of us bothered to learn even the rudiments of German for the trip. I bought a little book months ahead of time, but did I drill? Nein (which is one of the three words I used the entire time we were there, along with “danke” and “toilette?”).

Thus we had a hard time ordering food — I usually ended up with baloney slices swimming in oil and vinegar dressing — and reading road signs. If not for Inga the GPS Lady helping us we would have become hopelessly, scarily lost in the heart of Bavaria.

I didn’t even watch TV at night because the shows were all in German, as one might expect in Germany. So I watched the World War 2 DVDs that I brought along. 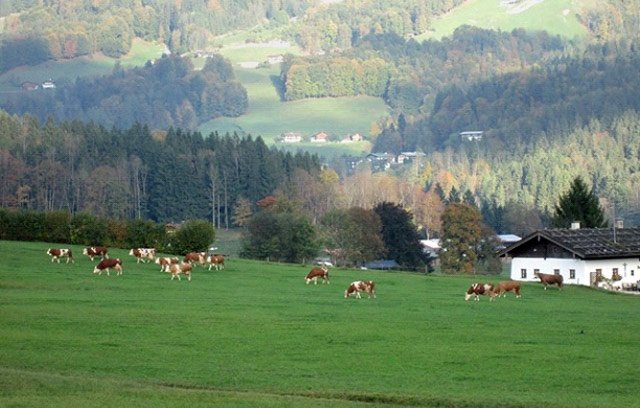 These are happy German cows

Back in English-speaking Cleveland, U.S.A.

I’ve been back for months and I am still grateful to be home in Cleveland. [blocktext align=”left”]My wife Barbara and I started small by going to the Natural History Museum and seeing a porcupine eating corn on the cob.[/blocktext]Travel is famous for giving you perspective. I found mine in being able to read the signs again and speak to people in English. English is the best.

And now I’m taking a month break between jobs and I’m going to rediscover Cleveland in all its English-speaking glory. My new perspective has energized me out of my loungewear and into planning day trips to local attractions.

My wife Barbara and I started small by going to the Natural History Museum and seeing a porcupine eating corn on the cob. Its human keeper explained things about the porcupine and was just as clear as a bell with her English. The museum’s restrooms were clearly marked and the toilets weren’t puzzlers. You knew exactly what you were getting at the snack bar, too. The Natural History Museum is a perfect microcosm of all the local joys we’re going to experience.

Now I’m going to drive home from the coffee shop and enjoy reading the “Yield” and “No Turn on Red” signs as I go. You have to get out of yourself sometimes to appreciate the finer things in life, and I am so there.

Eric Broder is the author of The Great Indoors and The Below-The-Belt Manager. His humor column appeared regularly in the Cleveland Edition and the Cleveland Free Times.