God, Baseball, and the Mystery of the Disappearing Novel: Nancy Willard’s “Things Invisible to See”

In the 1989 film Field of Dreams, Kevin Costner plays Ray Kinsella, an Iowa farmer who plows down a section of his cornfield to build a baseball field that’s soon populated by the ghosts of players past. But the man Costner really plays in the movie is Jesus Christ: a man who’s called by a higher power, who travels the land gathering a clutch of believers who share his vision, who weathers the persecution of those around him, and who ultimately is (spoiler alert!) reconciled with the father. Every scene featuring the Iowa ballpark is at least partly set during golden hour, the better to convey the magical, otherworldly feeling that baseball is a holy sport. When Ray Liotta’s Shoeless Joe Jackson character asks, “Is this heaven?” he’s posing a question that’s already been settled for the viewer. When Costner’s Ray responds, “It’s Iowa,” we know it’s a half-lie. 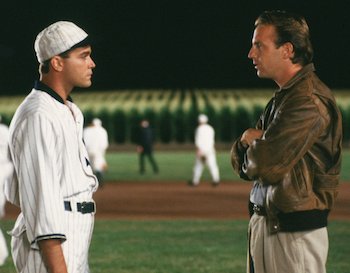 Liotta and Costner in Field of Dreams

Wherever there are stories about baseball, God is usually lurking somewhere, likely with a few thunderbolts in his fist. Field of Dreams is based on Shoeless Joe, a 1982 novel by W.P. Kinsella that arrived toward the end of an era in American literature when the Great American Novel was an offbeat baseball novel with a metaphysical bent. Bernard Malamud’s 1952 debut novel, The Natural, made its central character, Roy Hobbs, an allegory of a fallen god, starting with a David-vs.-Goliath battle between pitcher Ray and the “Whammer” in a Great Plains field. Robert Coover’s 1968 novel, The Universal Baseball Association, Inc., J. Henry Waugh, Prop., was baseball as creation myth — few critics missed the echo of “Yahweh” in the titular proprietor’s name. And Philip Roth’s 1973 farcical, fabulist baseball novel, as it happens titled The Great American Novel, was populated with characters named after pagan figures — Big John Baal, Gil Gamesh, Chico Mecoatl.

[blocktext align=”right”]Wherever there are stories about baseball, God is usually lurking somewhere, likely with a few thunderbolts in his fist.[/blocktext]“Baseball fiction has always used the game’s mythic propensities,” Donald Hall once wrote in a roundup of baseball writing in the early eighties, back when it seemed like there was a lot of baseball fiction to be rounded up. The baseball novel, and the sense of myth that pervades it, isn’t quite finished — Chad Harbach’s debut novel, The Art of Fielding, attracted an advance of more than half a million dollars in 2011. But the baseball novel is largely an outlier now, almost certainly hobbled in recent decades by strikes and steroids and a too-much-information culture that keeps constant tabs on every player’s ACL and DUI. But before we declare the genre dead, I’d like to make the case for one more entry in the baseball novel canon.

Nancy Willard’s Things Invisible to See was published in 1984 and all but disappeared after publication. I discovered it in a giveaway box three or four years ago, attracted in part by one of the strangest covers I’d seen from a major publisher (Alfred A. Knopf). It’s a picture of a modeling-clay diorama of a room where a woman sits a wheelchair, holding up a baseball, preparing to throw; in front of her is a young man holding a mitt, ready to catch; behind her is the figure of a winged angel who appears to have crashed into the wall like an outfielder who’s misjudged the warning track. It’s a bit goofy, nearly amateurish. But the back cover has a photo of Willard in a Detroit Tigers shirt, the flap copy promised God, death, and baseball, and the price was right.

I dread summarizing the plot for fear of making the book seem ridiculous, at least compared to our more orderly expectations of contemporary fiction today. But every magical-realist novel seems absurd when put into plain speech, so: Set in Ann Arbor, Michigan, on the cusp of World War II, the story turns on twin brothers Ben and Willie (“Esau and Jacob all over again”). After a ballgame with friends, Ben hits a ball into the dark that winds up hitting and paralyzing the legs of a young woman, Clare. Guilt-stricken, Ben starts caring for Clare, and they fall in love just before Ben is recruited by the Navy. One wartime cataclysm later, Ben is bargaining with Death for an opportunity to save his and his loved ones’ souls: He proposes a one-game playoff between a team each gathers back in Ann Arbor. A contract is drawn up:

Mythic stuff yet again. But the main charm of the novel is its interiority, the way it captures the closed quarters of small(ish)-town Midwestern life without turning it into a Norman Rockwell print. Wartime Ann Arbor is a religious place, but it’s spiritually promiscuous. All sorts of religions flow through Clare’s family home once she’s paralyzed: Christian Scientists, Quakers, an “itinerant spiritualist,” and an “Ancestress” (presumably the angel crashing on the cover) who clues Clare in to the nature of her injuries and guides her to Cold Friday, a local healer steeped in black Southern folkways. God Himself occasionally interjects with asides and comments. Amid this metaphysical stew, the pivotal baseball game formalizes the sense of fate that pervades the lives of all the characters.

But metaphysics aside, Things Invisible to See is also a beautifully written novel, evoking the charm of the game: “Today they are playing to be healed, to let the eyes and mouths of the dead fall away from them, to step back into the eternal present of summer the way they lived as kids, playing till darkness came; to find the timeless space that turns ordinary men into heroes, where the only real world is the game itself, as old and reliable as the stars.” 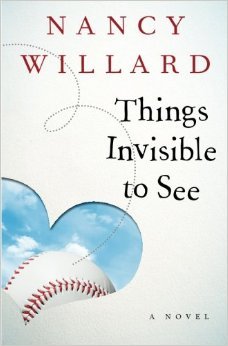 The black patois that Willard conjures for Cold Friday is awkward; family members flow indistinctly through Clare’s home; Willie, left back home during the war due to his flat feet, never becomes the foil for Ben that the Jacob-and-Esau analogy might suggest. An editor today would likely stamp out such infelicities, but I admire the book’s mad, messy grace, the way it’s all-in for the spiritual power of baseball in ways that Malamud/Roth/Coover didn’t dare and that Field of Dreams made sentimental. I’m not alone here: Last year novelist Leah Hager Cohen enthused about the novel in a New York Times Book Review “By the Book” Q&A: “Why, oh why, is Nancy Willard’s Things Invisible to See out of print? The novel … manages to be about life, death, love, hate, innocence, experience and baseball. It begins with casual verve: ‘In Paradise, on the banks of the River of Time, the Lord of the Universe is playing ball with His archangels.’ Willard is well known as a children’s book author, but her 1985 adult novel remains very wrongly obscure.”

Cohen’s comments prompted one of those rare cases where running a correction was good news: Things Invisible to See is back in print, revived by Open Road Media last spring. The only thing to complain about is the new cover, a saccharine image of a heart framing a baseball in blue sky. It’s the sort of image that pops on the store shelves, I’m sure. But there’s something reckless and charming and strange about an angel crashing into a wall that’s truer to the book’s spirit.

Mark Athitakis has written on books for many publications. He lives in Phoenix but grew up in Chicago.