In Appalachia, shifting political winds have forced Republican lawmakers to expand Medicaid. Could this be the start of a trend?

Mary White had noticed her knee hurting on and off for a while before she blew it out last October.

“I turned around to go down the steps after I locked the door, and it kicked out the side and tore that ligament in there,” she said.

White, who turns 64 in August, does not have health insurance. Her husband is on Social Security and Medicare, and between that and her slightly better-than-minimum-wage income at the Binns-Counts Community Center in Clinchco, Virginia, White doesn’t quite qualify for Medicaid.

A year and a half into Trump’s presidency and with the GOP in control of Congress, Republicans are realizing that they own the healthcare system and are accountable for the health of their constituents.

She receives care for several long-term conditions — diabetes, high blood pressure, osteoporosis, fibromyalgia — from the Health Wagon, a free clinic that provides mobile health services in the southwestern part of the state.

But Health Wagon doesn’t have an X-ray machine, and without health insurance, White can’t afford to pay for the service in nearby Clintwood. It’s been nine months, and her knee still bothers her.

In Virginia, there are roughly 400,000 Virginia residents waiting for next year, when on Jan. 1, 2019, Medicaid expansion will begin to cover folks like White, who currently fall into a healthcare gap: They make too much money to qualify for Medicaid, but not enough to qualify for federal marketplace subsidies. With the status quo, non-disabled adults without dependents don’t qualify for Medicaid at all in Virginia, regardless of how poor they are. A disabled individual making more than $9,952 a year is ineligible, as is a family of three making more than $6,720 in low-income rural areas, or $10,536 in more prosperous parts of the state.

For White and others, it didn’t have to take this long. The Affordable Care Act, derided as “Obamacare,” included federal funding to allow states to expand Medicaid to cover individuals and families with incomes up to 138 percent of the federal poverty level, but Republicans in Virginia and elsewhere resisted expanding the program.

Now, a year and a half into Donald Trump’s presidency and with the GOP in control of Congress, Republicans are starting to realize that, like it or not, they own the healthcare system and, as such, are accountable for the health of their constituents.

“Donald Trump won in 2016 and we got both houses of Congress,” said Terry Kilgore, a 24-year Republican state delegate from the farthest southwest corner of Virginia, who played an important role last month in passing the coming Medicaid expansion in the state. “That was a rallying cry: Congress was going to do away with or go in and fix Obamacare. Well, it hasn’t happened. I think we’ve given ample time. It’s no longer Obamacare; it’s a federal government program now. You had chances to repeal and replace and it didn’t happen. Now we’ve got to play the hand we’re dealt.”

Kilgore is no moderate Republican, and as part of the Virginia House Republican leadership and chair of the Commerce and Labor Committee, he was a key part of Republican resistance to expanding Medicaid in the state. But in 2018, the politics of “blame Obama” just don’t work anymore — especially when your constituents are suffering.

“When you lost all the coal jobs, a lot of people lost their healthcare,” Kilgore said. “People were working but were going to jobs paying $8 to $15 per hour with no healthcare benefits. We need more healthcare options and a healthier workforce.”

Kilgore’s district serves as a proxy for what’s happening in rural Virginia more broadly. At one point in September, it looked like as many as half of Virginia’s counties would not be covered by an Obamacare insurer. Later that month, Anthem reversed its decision to withdraw from the marketplace, but its 2018 premiums sharply increased from the year before. Many of those areas were rural areas represented by Republicans.

In a poetic twist, one of those Republican state senators who voted for Medicaid expansion was Ben Chafin, who represents the 38th District, part of which overlaps with Kilgore’s smaller House district. Chafin was elected to replace Phil Puckett, the last coalfield Democrat in the General Assembly. During the first Medicaid expansion fight in 2014, Puckett resigned at a pivotal moment, essentially handing his seat — and the chamber majority — to Republicans, thereby helping the GOP prevent Medicaid expansion from passing for the next four years. Yet his Republican successor was a key vote in making it happen in 2018.

Republicans in other states still are grappling with healthcare. There are 15 states that have failed to do so, including the swing states of Florida, North Carolina, and Wisconsin.

Kentucky’s Republican governor has dismantled what was perhaps the nation’s most successful state healthcare marketplace program, but a federal judge has blocked his attempt to pair Medicaid with work requirements. The state subsequently canceled dental and vision coverage for Medicaid recipients.

Expanded Medicaid remains popular among voters in states that have it, even in states that went heavily for Trump. In West Virginia, Republican U.S. Sen. Shelley Moore Capito cited preservation of Medicaid expansion as a reason for her vote against Obamacare repeal.

In Virginia, Medicaid expansion will cover an individual making an annual income of $16,754, or a family of three living off of $28,677 — with the federal government covering 90 percent or more of healthcare costs.

For those on the ground trying to connect people with medical services, Medicaid expansion represents a major breakthrough. 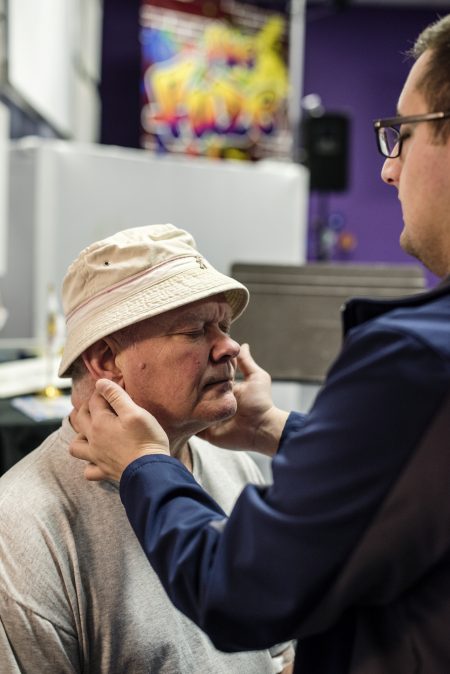 “It means everything for my community,” said Norma McLemore, a healthcare advocate who lives in Scott County, near Virginia’s borders with Kentucky and North Carolina.

McLemore points to the Remote Area Medical (RAM) Clinic that for nearly two decades has been held annually at the Wise County fairgrounds. Every July, between 1,500 and 2,000 people travel from hours around and line up the night before its gates open to receive free medical, dental and vision care. (This year’s RAM Clinic will be held from July 20th to the 22nd.) With its dramatic scenes of patients being treated in livestock stalls, the clinic has become a destination for parachute journalists and politicians seeking a sense of the sheer need for healthcare in America. RAM runs clinics around the country, including at several sites in Central Appalachia, and demand never seems to wane.

“It’s outrageous in this country, with the amount of money we have, to make people go through that process just to get medical care,” McLemore said. “It’s not enough. The RAM people are wondrous, but once a year healthcare is not enough.”

“If we can develop that model and make it work for us, I think we can increase patient access to healthcare,” Tyson said.

That approach might yield some new ideas about how healthcare works in rural areas. The Health Wagon already is collaborating with others to invent new ways of delivering healthcare. At the Wise RAM Clinic in 2015, for example, it partnered with the Federal Aviation Administration, Virginia Tech researchers, and others to test drone delivery of medical supplies.

Medicaid expansion isn’t a cure-all for rural Virginia’s health challenges. There aren’t enough healthcare providers, and many providers don’t accept Medicaid. Others who don’t qualify for Medicaid, including those on employer-provided plans, face steeply rising premiums. But advocates see expansion as a step in the right direction, removing a financial obstacle for 400,000 Virginians.

“If you remove those barriers, you get an excellent clinical response,” Tyson said. “In the end you are addressing healthcare disparities. You are making a healthier Appalachia.”

Mason Adams (@MasonAtoms) has covered Blue Ridge and Appalachian communities since 2001. He writes from Floyd County, Virginia, where he lives with his family, goats, chickens, dogs and cats.