The Great Railroad Strike in Pittsburgh


When the Pennsylvania Railroad and Union Depot, situated in the Strip District, caught fire in 1877, there wasn’t doubt as to its cause. Torched by railroad workers themselves, the station was immolated as one of the more spectacular events in the violent strikes that stretched from Baltimore to Pittsburgh, from West Virginia to New York, and that would be remembered by enraged and fearful robber barons as the year that communism gained a toehold in the industrial heartland of the United States. 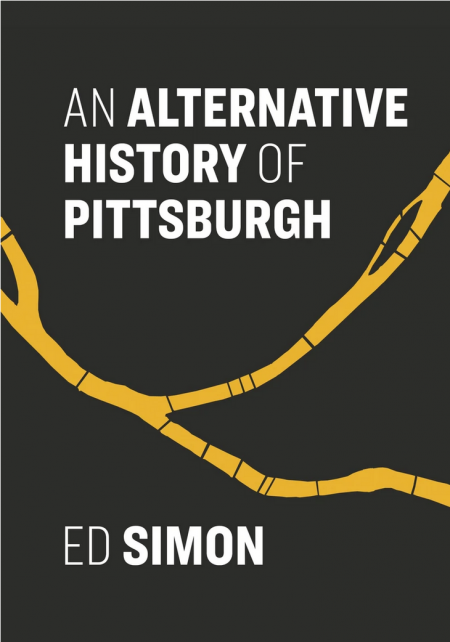 The Great Railroad Strike didn’t begin in Pittsburgh, and it wasn’t contained to Pittsburgh. Labor solidarity stretched from Reading and Shamokin to Scranton and Albany, as well as Syracuse and Buffalo, but Pittsburgh was where workers would fight the hardest and where state brutality would be the most marked. For forty-five days the strikers brought commerce to a halt as the nation seemed on the verge of a full- blown socialist revolution. For a brief period, the city was in the grip of the workers, an American incarnation of the Paris Commune established by anarchists, socialists, and communists for a brief few months in 1871—or at least both detractors and supporters made that comparison. Writing with purple pen a few months after the strike ended, the St. Louis journalist J. A. Dacus opined in Annals of the Great Strikes in the United States: A Reliable History and Graphic Description of the Causes and Thrilling Events of the Labor Strikes and Riots of 1877 that “Men remembered France, and the scenes of 1789–93, and trembled as they heard the tumult increase, and saw the mighty masses of strange, grimy men, excited by passions, dark and fearful, surging along the streets.”

The upheaval started in Martinsburg, West Virginia, appropriately enough on Bastille Day. Only a few months before, the federal government betrayed the promise of Reconstruction throughout the demilitarized South. Reconstruction had enacted a radical program of racial and economic justice that went far beyond the program debated at the Pittsburgh conference in 1856. West Virginians had first rejected the slave system of their state government in Richmond, and in 1877, they rejected the system of wage slavery that increasingly dominated the economics of the Gilded Age North. A connection between the “Compromise of ’77” and the federal government’s violent reaction to the railroad strikes is not incidental. Noted by David O. Stowell in Streets, Railroads, and the Great Strike of 1877, “With Reconstruction at an end, a new era of increasing conflict between labor and capital commenced.” Weeks before federal troops had been patrolling Southern states. Now, with some irony, Stowell notes that those same soldiers “massed in northern cities to help suppress rioting free white laborers and other urban residents.”

President Rutherford B. Hayes was instrumental in both Reconstruction’s demise and the government’s reaction to the strike, and as such, he was representative of the reaction against a more emancipatory politics. Such revanchism encouraged both state-sanctioned terrorism against Black Americans in the South (leading to the Great Migration northward, which demographically altered cities like Pittsburgh), as well as the anti-labor policies formed in response to workers’ rights. The strike itself was born from the deprivations of the economic slump that began in 1873, a depression that would last longer than its twentieth-century counterpart. For workers across the rapidly industrializing nation, the depression was disastrous, with the moneyed class compensating by slashing employee pay, increasing work hours, and refusing to acknowledge any labor organizations. Keeping score is easy if you’re being honest, for as Pittsburgh’s National Labor Tribune noted, “These men merely want to live—and do not want their wives and little ones to starve, which they must certainly do if they are compelled to accept the terms of the company and go to work.”

A fully radicalized city government refused to enforce the dictates of either the Pennsylvania Railroad or the Baltimore and Ohio Railroad, so for the second time in Pittsburgh’s history, western Pennsylvania was marched on by eastern troops, as Philadelphia’s National Guard were sent to enforce capital’s property rights. One journalist castigated this “insane policy of calling Philadelphia troops to quell domestic quarrel” as something that was “reprehensible beyond degree,” and if Pittsburgh troops were unwilling to open fire on their neighbors, the eastern interlopers were not so placid. One robber baron gleefully said that the strikers should be fed a “rifle diet for a few days and see how they like that kind of bread.” So it would be, for on July 21, those troops would kill more than four dozen Pittsburghers; in response, the strikers would burn not just the depot, but dozens of buildings, hundreds of engines, passenger and railroad cars, and thousands of freight cars owned by the railroad company, while pushing the National Guard out of the city, where they hid atop the northern hills across the Allegheny River. The Pittsburgh Sunday Globe Extra referred to the bloodshed as “The Lexington of the Labor Conflict.” 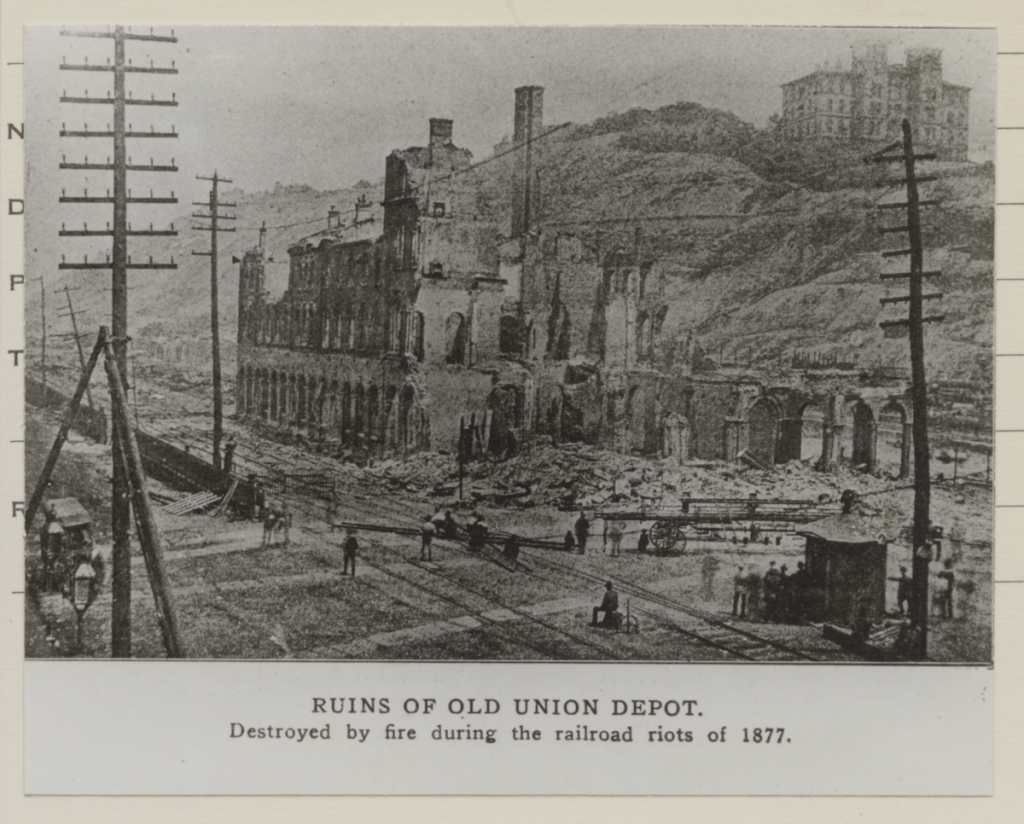 Ruins of the Pennsylvania Railroad Union Depot Building, after it was destroyed by fire in 1877. Image via the Jones & Laughlin Steel Corporation Photographs collection in the Detre Library & Archives at the Heinz History Center.

The Harmonists north of the city wondered “whether this reign of terror marked the beginnings of the harvest-time spoken of in Scripture,” while a Pittsburgh newspaper sympathetic to labor thought it “the Beginning of a Revolution . . . [which] will, in the future history of this country, be designated as the beginning of the second American Revolution, which inaugurated the independence of Labor from Capital.” As it was, the events of 1877 were neither apocalypse nor revolution, but rather a faint shadow from a parallel universe where the United States could have been a genuine socialist country. As with the Paris Commune, the “rioters” were agitating not just for fair working conditions, but for the profits of their own labor. Order would be restored when federal troops were activated and sent into Pittsburgh by President Hayes, drawing the experiment to a close. “Pittsburgh and the riots neither surprised nor disturbed me,” wrote novelist Mark Twain, “for when the government is a sham, one must expect such things.”

If American industry with all of its totalizing enormity and might was born at the Three Rivers, then so too was the response of the workingman. The lessons of 1877 are radical ones, and so knowledge of the event is often occluded and passed over, but the impromptu strike and its solidarity were a powerful spark. Labor historian Philip Fonner says as much in The Great Labor Uprising of 1877, writing that it was a “social rebellion, the first assertion by a national working class of a common anger against a variety of grievances—years of brutal exploitation, and a system of industrialization which viewed the worker as little more than part of the machine. …It was the first real evidence of working-class collective power.” An editorial in a local newspaper was more succinct, if no less astute: “Pittsburgh had taught the monopolists a lesson they will never forget.” ■

An excerpt from An Alternative History of Pittsburgh, available for pre-order from Belt Publishing.

Ed Simon is a staff writer for The Millions and author of An Alternative History of Pittsburgh, forthcoming from Belt Publishing.

Cover image of The Pennsylvania Railroad Union Depot Building, built in 1857, before it was destroyed by fire in 1877. Image via The Jones & Laughlin Steel Corporation Photographs collection in the Detre Library & Archives at the Heinz History Center.