Tying the Green New Deal to Environmental Justice in Chicago

This story was originally published by South Side Weekly. Reprinted with permission.


In 2018, a report from the International Panel on Climate Change warned that averting catastrophic climate change would require “rapid, far-reaching and unprecedented changes in all aspects of society.” This February, Alexandria Ocasio-Cortez (D-NY) and Ed Markey (D-MA) introduced into Congress the Green New Deal, a bold proposal to slash emissions to net zero by 2030, keep global warming to 1.5 degrees Celsius (2.7 degrees Fahrenheit), guarantee a job for every American, and “counteract systemic injustices” by ensuring all Americans have access to clean water, air, and healthy food.

One of the Green New Deal’s primary backers has been the Sunrise Movement, a youth-led climate action group. On April 27, Sunrise hosted its first Green New Deal Town Hall in Chicago at the Brighton Park Library. The group also hosted a city-wide town hall on May 18.

These are just two of the one hundred town halls Sunrise plans to host across the country. Each is a chance for them to demonstrate that a Green New Deal won’t just benefit the world in 2030 or 2050—it can address the environmental and economic challenges communities are facing now. The recent town hall in Brighton Park focused on environmental issues on the Southwest Side and how a Green New Deal might address them.

“Why should a Latino from Little Village care about the Green New Deal?” asked panelist Jose Luis Torrez, a City Colleges student advisor who recently made an unsuccessful bid for 14th Ward alderman. Torrez answered the question indirectly, talking about how his environmental consciousness had been awakened by his brother’s struggles with severe asthma. Torrez attributed his brother’s respiratory issues to growing up in proximity to the former Crawford Power Generating Station in Little Village.

“We almost lost him several times,” Torrez said. “What’s killing us are all the things we can’t see.”

Coal-fired power plants like Crawford release pollutants that contribute to asthma-triggering smog. They are heavy emitters of lead, arsenic, mercury, and other pollutants that can damage the nervous and respiratory systems, and even cause cancer. Crawford and Fisk Generating Station, the other South Side coal-fired power plant, closed in 2012 after declining to upgrade their plants to meet federal air quality standards.

South and West Side residents all too often lack access to the clean air, water, and healthy food the Green New Deal promises. According to a 2018 map created by the Natural Resources Defense Council, communities on Chicago’s South and West Sides face disproportionately high levels of environmental exposure. 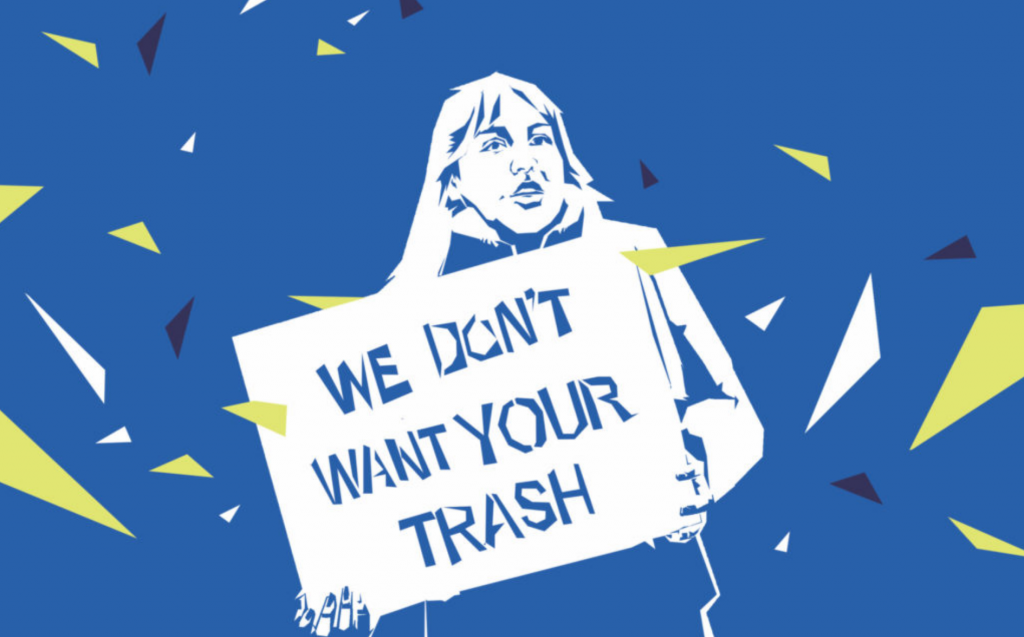 Illustration by Ellen Hao for South Side Weekly.

Some panelists, like Martinez, called upon the audience to support environmental justice initiatives already underway. She is a member of Neighbors for Environmental Justice, a group that has opposed the asphalt plant since McKinley Park residents learned of its existence.

Others talked about new policies or programs that could address system-wide environmental justice issues.

“We need a $1.3 billion jobs program to eliminate lead and poverty in Chicago,” said union organizer and community activist Pete DeMay, who recently lost a campaign for 12th Ward alderman. He proposed leveraging EPA funding to create jobs replacing the 400,000 lead service lines that transport water from the water main into homes. According to the Centers for Disease Control and Prevention, there is no safe level of lead exposure, which can negatively impact children’s’ neurological development.

Panelists focused less on climate change and more on the immediate health impacts of industry on residents. Torrez, for example, didn’t mention that coal power plants are responsible for eighty-one percent of the electricity industry’s greenhouse gas emissions, according to ToxTown, a project of the US National Library of Medicine.

The audience seemed more energized by local issues than national-level ones: DeMay elicited more hisses and boos by talking about “TIF gravy” and the controversial Lincoln Yards development than Campion did by mentioning the Koch Brothers, who use their fossil-fuel fortune to stifle action on climate change. (It’s worth noting, however, that a firm owned by the Koch brothers came under fire for storing petroleum coke, an oil refinery byproduct linked to heart and lung disease, on the Southeast Side, and closed down in 2015.)

But some members of the forty-person audience already had ideas about what the Green New Deal could bring to the South Side. When the panel broke for a discussion on the question, the crowd, which trended slightly younger and whiter than a random sampling of Chicagoans, buzzed with ideas. Sarah, who asked that her last name and neighborhood be kept private, said that “empowerment, autonomy, and access” would follow community control of renewable energy sources. “Historically, that’s something working-class people have been shut out of.”

For decades, the environmental movement has faced a divide between the Big Greens—larger, better-funded organizations staffed mostly by white college-educated professionals—and local environmental justice groups staffed by and serving what are known as “frontline communities”: low-income communities of color disproportionately burdened by pollution and climate change.

The split was evident in the debate that arose when Mayor Emanuel announced Chicago would be joining the Sierra Club’s Ready for 100 campaign, where cities pledge to transition to one hundred percent renewable energy. Campion testified in favor of the plan, and the Sunrise Movement in Chicago celebrated its passage.

But a coalition of South and West Side environmental justice groups criticized Ready for 100. “Our communities have time and time again seen the city of Chicago use high-level resolutions as a tactic to avoid addressing equity, public health and environmental impacts in Chicago’s neighborhoods, and the announcement follows this pattern,” they told WTTW.

The audience at the town hall reflected a mix of constituencies: people who work in solar, people who work in film, members of the Democratic Socialists of America, parents of young kids, and a delegation from panelist Jackson Potter’s social studies class at Back of the Yards High School. No one in the crowd needed the Spanish translator’s services, suggesting that Sunrise still has more work to do to connect with Latinx communities on the South Side.

Alex Westrich, the event’s organizer, says that she sees Sunrise as “bridging the gap” between the two approaches to environmental activism. Westrich, a white, college-educated Brighton Park resident, says she organized the event to “elevate the voices of my neighbors and other community members who have done so much” to address environmental injustice.

“The Sunrise Movement places environmental and climate justice front and center in their campaign,” Westrich says. “Everyone is in this fight together. Everyone has a story to tell, and we want to hear everyone’s stories, especially people who have been disadvantaged and disenfranchised. The more we hear those stories, the more we as a society are going to be motivated to do something about it.”

Sunrise organizers hoped the town hall would be a point of entry for new members. At the event’s end, attendees were urged to support Sunrise’s work along with opposition to local polluters. They received a list of upcoming events to turn out for: a climate strike, the city-wide Green New Deal Town Hall on May 18, and a hearing for the MAT Asphalt Plant’s five-year operating permit.

Campion asked the audience to think about the organizations—churches, schools, and workplaces—they already belonged to. Still a student himself, at Loyola University, he assigned some homework: “Could you get them to sign on to a Green New Deal?” ■

Rebecca Stoner is a Chicago-based writer whose work has appeared in Pacific Standard, In These Times, and elsewhere.