The West Woodlawn Arboretum, in Chicago’s Bronzeville neighborhood, reflects a “new narrative” of “joy and abundance”

On the southern end of Chicago’s Bronzeville neighborhood—between Martin Luther King Jr. Drive and Cottage Grove west to east, and 60th Street and South Chicago Avenue north to south—is the West Woodlawn Botanic Garden and Village Farm & Arboretum. Elements located within the boundaries of the Arboretum include the Sustainability Teaching Garden and the Orchard of the Elders. The Arboretum is aspiring to become the country’s first accredited African American community arboretum, part of a block-level initiative celebrating community life, memory, and ecology on Chicago’s South Side.

Many depictions of urban life—especially those involving disinvested neighborhoods populated by residents of color—paint a stereotyped portrait of an uninviting “concrete jungle” covered over with pavement and perhaps a few sparse patches of grass. But projects like the Woodlawn Arboretum reflect a reality that, while not an idyllic pastoral scene, is far removed from this type of bleak scenario. 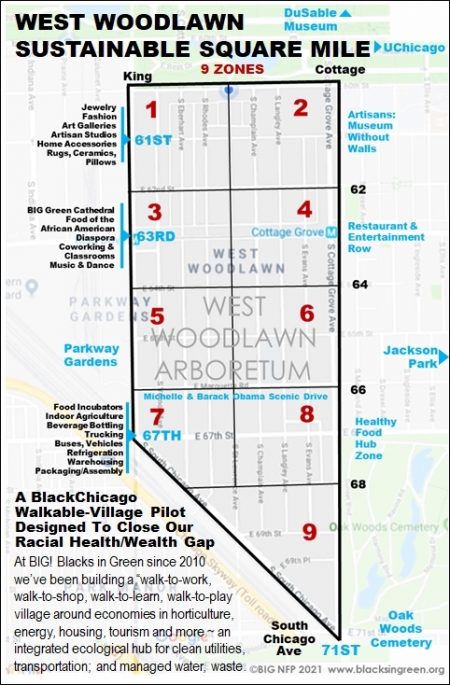 This map outlines the boundaries of each of the nine zones of the Sustainable Square Mile, which includes the West Woodlawn Arboretum. Graphic courtesy of Naomi Davis/Blacks in Green.

The “Sustainable Square Mile” that encompasses the Arboretum was conceived in 2010 through Chicago’s Green Healthy Neighborhood program and launched in 2013, according to Naomi Davis, founder of Blacks in Green. As the granddaughter of Southern sharecroppers who migrated to the North, Davis is an evangelist for sustainability and developing urban green spaces. She has made it her mission to promote urban greenery and economic development based on sustainability.

“We are actually Zone 6 of the Black Metropolis. We are West Woodlawn,” Davis said. “That is our Great Migration heritage community that we celebrate as part of our Sustainable Square Mile platform. We are destined to deepen the awareness and the appreciation of (it). The old folks, they get it. They were here during the fifties and the sixties where we were ripe on the vine and all things great were possible. Our generations since then don’t really have a personal witness of those times.”

The Arboretum is just one element of a multi-faceted set of programs that have been initiated, planned, or proposed by Blacks in Green as part of Davis’ vision for the Sustainable Square Mile. Among her other ongoing passion projects are the development and operation of the Mamie Till Forgiveness Garden, the Green Living Room, 16 Great Migrations Gardens, and the Michelle Obama Garden, all located within West Woodlawn.

In developing the Arboretum, Blacks in Green has worked in collaboration with a number of organizations, including Morton Arboretum in west suburban Lisle. “We have an inventory of every tree in West Woodlawn that was famously cultivated with and through Morton Arboretum. These are the underpinnings of what makes an arboretum. Number one, do you have an inventory? Do you know what you’ve got? Do you understand the gaps and have a planting plan, a species diversity plan? Do you have an educational arm, a program outreach, ongoing teaching, and hands-on engagement?” Davis said.

Morton Arboretum was especially instrumental in assisting Blacks in Green with obtaining and planting trees for the Arboretum, as well as in the creation of an inventory of the trees within the boundaries of the Arboretum. “For me, it’s one of the more exciting growing community engagement programs or initiatives, because it does take a village, or it takes everyone who’s involved, and you don’t need to have a certain level of education or experience. In fact, it’s better if you’re coming with all kinds of different experiences and education, “ said Trinity Pierce, Stewardship Coordinator for the Chicago Region Trees Initiative and a staff member at the Morton Arboretum. 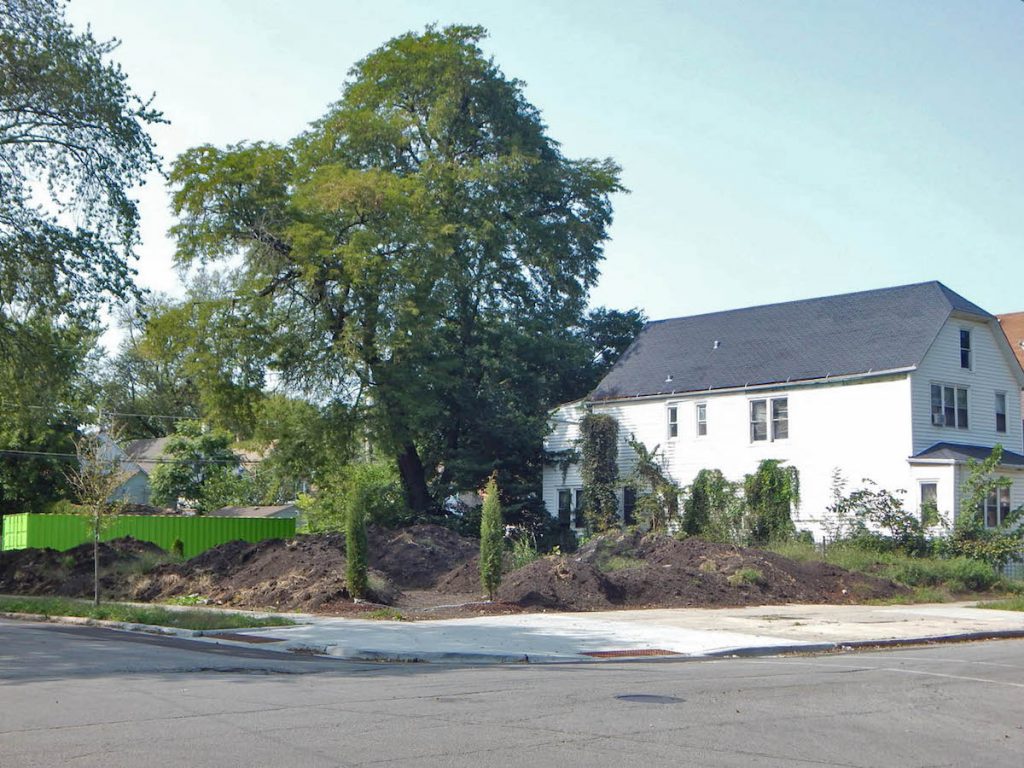 The Mamie Till Forgiveness Garden is located within sight of Emmett Till’s childhood home. Photo by Audrey Henderson.

A newer project for Davis is the Mamie Till Forgiveness Garden – located on the corner of East 64th Street and St. Lawrence Avenue. The Garden is within sight of the childhood home of Emmett Till, who was murdered by White racists in 1955. Populated with a collection of trees, evergreen bushes, grasses and formations of earth, the Garden contains a network of pathways. At the end of one pathway near the center of the garden, two smooth but unpolished stones – one large, one small, are nestled together. They represent Mamie and Emmett Till. Mother and child.

The garden is intended to be a place of refuge, respite, peace, sanctity, celebration – and forgiveness, according to Davis. “In the ceremonies we’ve had, we’ve asked who can you forgive? If Mamie Till could forgive the people who kidnapped and tortured her son, I mean, really? Who can you forgive?” Davis said.

As a space designed more for contemplation and reflection than as a passive beauty spot, the garden will be a working plot, with a field of medicinal and herbal plants cultivated for the Green Living Room apothecary. The garden will also provide stormwater management. Its
multi-functional purpose reflects Davis’ holistic vision of sustainability and economic development through cultivation of urban green spaces. 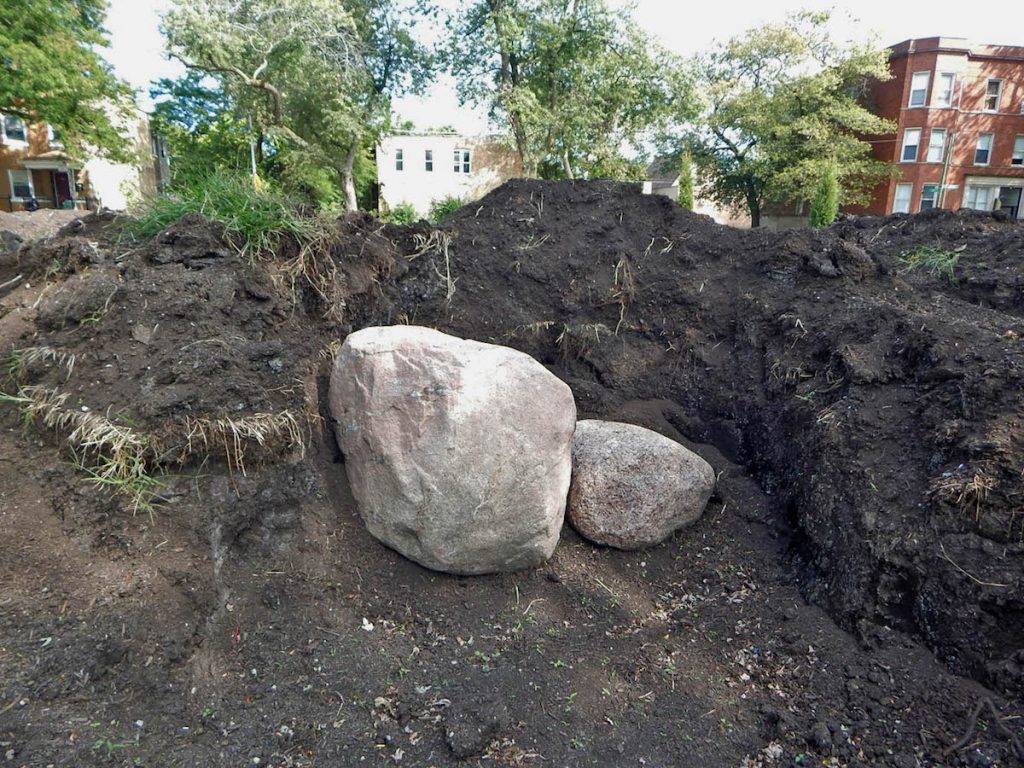 These two stones, nestled at the end of a walkway within the Mamie Till Forgiveness Garden, represent Mamie and Emmett Till, mother and child. Photo by Audrey Henderson.

For Pierce, the fact that projects like the West Woodlawn Arboretum and the Mamie Till Forgiveness Garden diverge from conventional green and floral enclaves in separate cultivated settings is a beneficial reflection of the realities of the present social environment. “I know with the garden committee, and with Blacks in Green on the site visits, we would have an engineer, or we might have a landscape architect, or we might have someone who really knows the local history and all of those different expertises could come to bear, in some ways (making it) more of an accessible living arboretum.” Pierce said.

“I think oftentimes conservation organizations [that] are those focused on enriching the urban forest or tree health can lose sight of the people component. And I think this garden puts the needs of people. (It reflects) our history of racial injustice; makes it something that’s not buried, but you’re not being confronted or in a way that might shut other people down,” Pierce said. “So, I think it’s just a wonderful space for ongoing dialogue and conversation. “

Like residents in more affluent urban and suburban areas, many people on the South Side and West Side in Chicago embrace a connection with green spaces. People like Naomi Davis, along with their respective organizations, have committed themselves to maintaining and enhancing these green spaces – along with integrating them into a larger fabric of development in their communities. “We have a vision. We will not live in a trench. We’re not trench people,” Davis said. “We’re victors. We’re victors. And the new narrative that we are articulating is that of joy and abundance and comfort and plenty and triumph.” ■

Audrey Henderson is a freelance writer based in the greater Chicago area. Her work has been featured in Next City, Chicago Architect magazine, Global Traveler, and Transitions Abroad, along with trade and consumer print and online publications worldwide.

Cover image of the Mamie Till house in West Woodlawn by Lloyd DeGrane.