The niche, grassroots sport has a global presence, but it was born in the Rust Belt


In 2015, I was sitting in the bleachers somewhere in North Carolina as I watched a driver, low to the ground, rip around a dirt track with a checkered flag. The crowd roared and wiped the sweat from our brows. I remember my thick straight bangs sticking to my forehead thanks to the relentless Carolina humidity. It was the dirt, it was the mud, it was the grit: it was the niche, rowdy sport of lawn mower racing.

Lawn mower racing wasn’t born in the South. These days, communities of racers extend all the way from the U.K. to Australia and everywhere in between, but the first mower race was right here in the Rust Belt. It was held in Twelve Mile, Indiana, which adopts a “Grand Prix” style of racing—fifteen miles, sixteen laps. Since 1963, the race has been held in Plank Hill Park on the Fourth of July. This year, Twelve Mile celebrated its sixtieth annual mower race.

Across the pond, in 1973, the British Lawn Mower Racing Association (BLMRA)—the first mower racing league—was formed. The U.S. soon followed suit and created the U.S. Lawnmower Racing Association (USLMRA), headquartered in Chicago, as well as a touring series, the STA-BIL National Lawn Mower Racing Series. In 1992, after sixty years in business, the fuel additive company Gold Eagle was looking to grow its revenue and decided lawn mower racing was the perfect ticket. Gold Eagle’s fuel stabilizer, STA-BIL, became the promotional gimmick for the race, and although it isn’t a gimmick anymore, the name has stuck.

On average, a lawn mower racetrack is eight hundred feet around, and most mowers go thirty or forty miles per hour. In 2010, one racer—Bobby Cleveland—drove his riding lawnmower across the Bonneville Salt Flats at 96.5 miles per hour. While most mowers are slightly modified, they keep the basic systems of a ride-on mower, sans blades. Finding a sturdy, comfortable, fuel-efficient mower is key. Competitors usually spend between $500 and $10,000 on their mowers, which means the range of specimens is dramatic; the Seattle Times called them “chariots of the proletariat.” 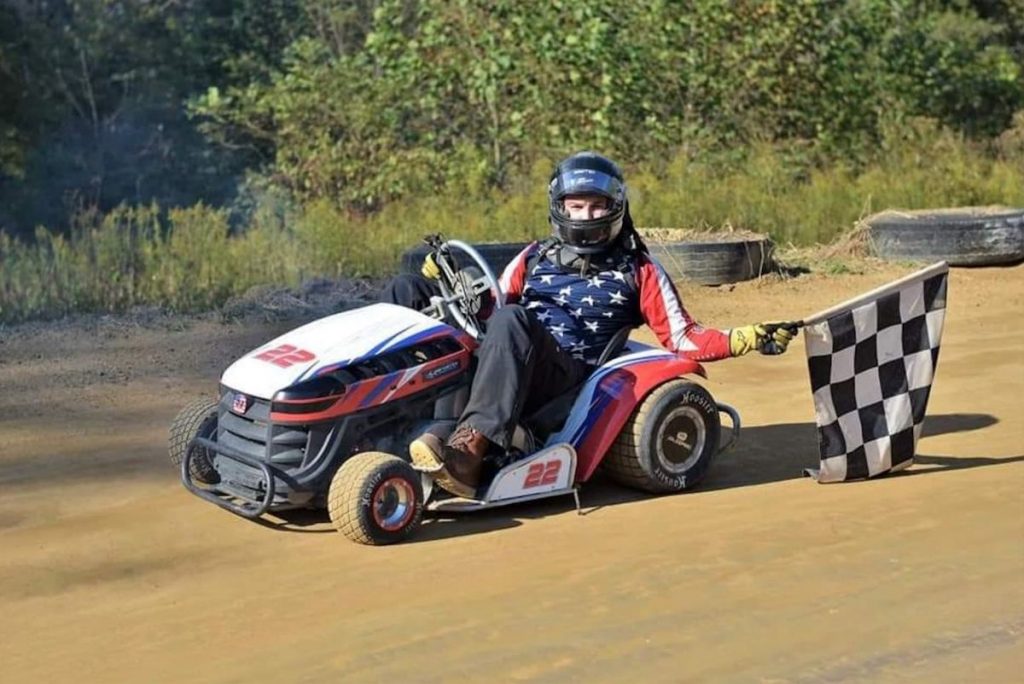 Since every mower is unique, most racing clubs are based on U.S. racing rules. Lawn mower racers accumulate points in each race to win the national title. The system is: 100 points for registration, 100 points for finishing, and then additional points for every placement fifth and above: 100 points for fifth place, 150 for fourth, 200 for third, 250 for second, and 300 points for first. Winning a race isn’t money-driven; it’s mostly bragging rights.

Championship driver and hall-of-famer Chuck Miller, from Marion, Ohio, says his involvement in lawn mower racing stems from his interest in “everything loud.” In 1992, Miller read about a lawn mower race happening in Chicago—the flagship STA-BIL race—and made his way to the city. “I messed around for about three weeks and I built my mower. We went to Chicago and we just had a ball. We were laughing the entire time” he told me. Miller has raced in every STA-BIL National Lawn Mower Racing Series race since its inception, traveling across the country to meet clubs and associations and create a wide network of racing comrades. (He’s been called the Michael Jordan of lawn mower racing.)

Many groups, like the Michigan Mower Racing Association (MMRA), are amalgamations of previous clubs. MMRA president Troy Freeman, who hails from Vestaburg, Michigan, says that when the Potterville Sod Slingers, a twenty-year-old club, wasn’t able to renew the lease on its racetrack, it joined arms with clubs in the general area and created the MMRA. The association now has a new home at the go-kart Arthur Raceway in Reese, Michigan where they are able to race bi-weekly.

Freeman comes from a go-kart history and picked up mower racing five years ago. He now races in the Factory Experimental Twin class (FXT) which includes regulations of minimum two-inch ground clearance and maximum forty-two-inch width. There are a total of five classes for mower racing, with age restrictions and guidelines varying in each class for mowers. “A lot has changed over the years with classes,” says Freeman. “The FXT class is the most advanced and fastest class there is.” In the FXT class, the engine in the mower must be a mower engine and has to be naturally aspirated, meaning no nitrous, turbo, or supercharger. “But anything else internally goes,” Freeman says.

The MMRA travel to various races, like Twelve Mile in Indiana and the “Mow Down ALS” charity race in Chillicothe, Ohio. “Our numbers have been down the last few years but more people are getting into the sport locally every year. I’d say we have around twenty racers that race with us throughout the year,” Freeman told me.

Riders must wear neck supports and include a killswitch, which turns off the motor if a driver falls off. Miller assures me that safety is a top priority. For some folks, lawn mower racing is an alternative type of sport. In 1985 Mike Gulish—nicknamed “Bolts”—was racing stock cars when he broke his neck. Doctors said he would never race again. But then he heard about mower racing, and suddenly he was on the track with his 1967 Montgomery Ward. 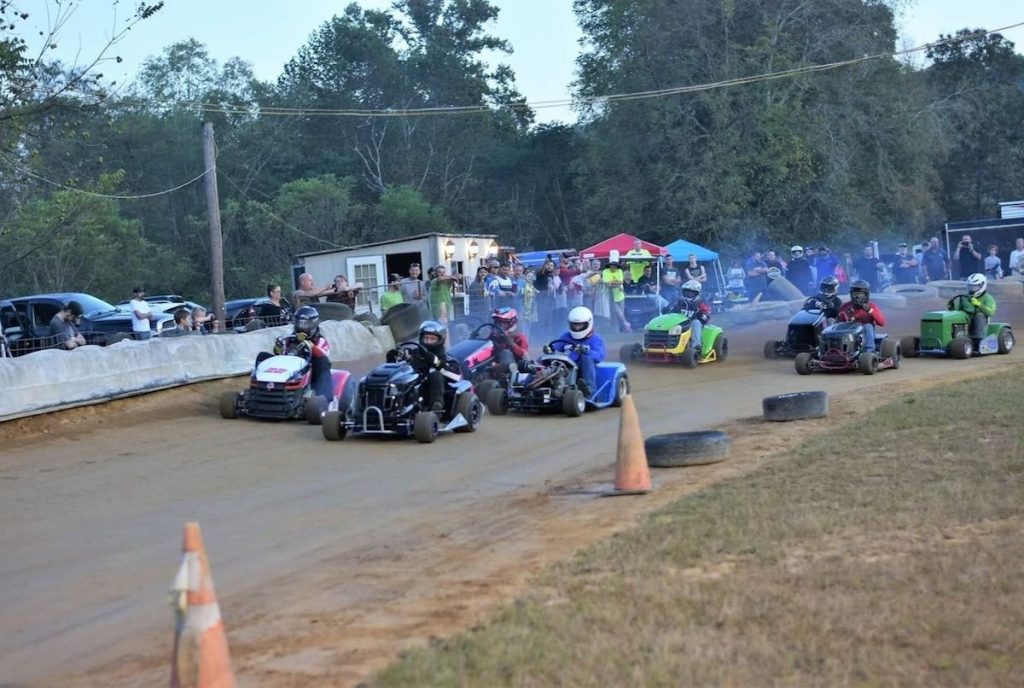 But this is not to say mower racing isn’t dangerous. “There’s been some crashes. People get banged up. So, you know, we try as much as we can for safety, but we’re still racing and sometimes things just happen,” says Miller. As for Miller, he says, he’s been fairly safe. “I’ve had a couple of doozies, rollovers, and probably two concussions,” he says.

The USLMRA has approximately forty-three races, fifty-five chapters, and sixteen members, but those numbers fluctuate. Last year, Miller traveled to Oregon to race on a “big beautiful track” with a “nice group of people,” but they don’t have a larger community like some of the other areas in the U.S. Many racers—called “long haulers”—travel five to eight hours to participate in a race out of state. Local Rust Belt clubs still exist, though. Wisconsin, Ohio, and Michigan hold several races, Elsewhere, states like Florida have NASGRASS, which starts its season in the fall, and North Carolina has the Rebels and Rednecks club.

I’ve always considered lawn mower racing a humble sport—making something slow go fast. Even while watching it as a fifteen-year-old, I knew there was a sense of camaraderie between the racers and their machines. Some call it a “poor man’s NASCAR,” but I always thought of it as improvisational. Why let a good engine go to waste?

This year, due to rising gas prices and the pandemic, Miller has only participated in a handful of races. But he told me lawn mower racing is more than steel, skid marks, and a rush of adrenaline; it means community. He mentions a racer who once said, “Going to a lawnmower race is like going to a family reunion you want to go to.” The race is just a part of the experience. Most racers arrive with their RVs or campers. “Racing, Miller says, “is just an excuse for us to get together and have a good time.” ■

S. Nicole Lane is a Chicago-based freelancer and deputy editor of Giddy.